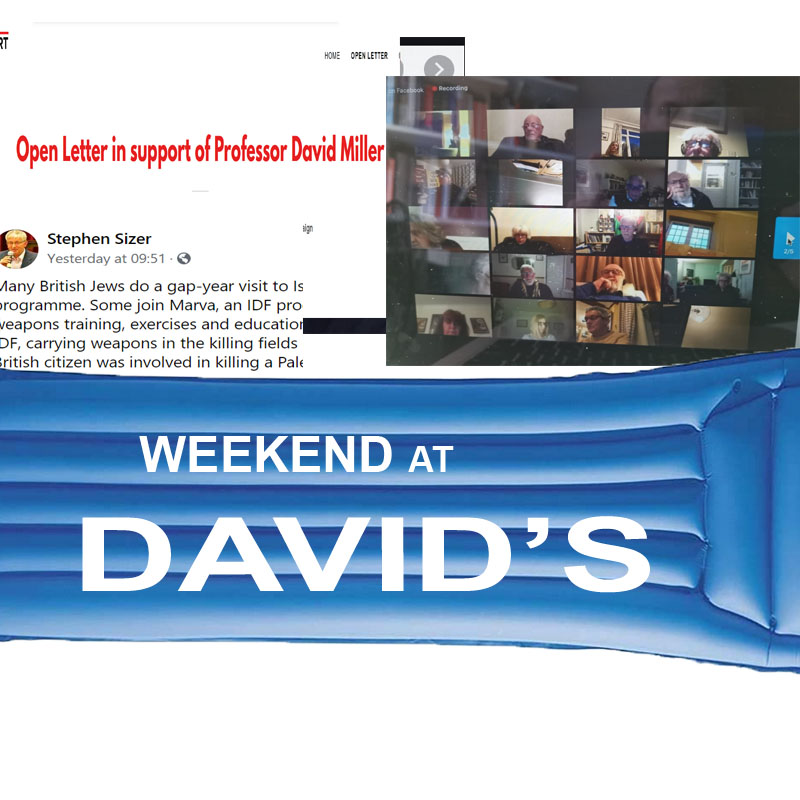 Weekend at David’s. Relentless attacks – on Jews, Zionism and Israel

The current attacks on Jewish people, Zionism and Israel are relentless. Zoom provides a cheap and easy option to hold an endless stream of events and anti-Israel activists are making the most of it. This is the story of my weekend:

On Friday night, just before I sat down to eat dinner and welcome the Shabbat with my family, I sat through a David Miller support event. There is no rational reason for supporting Miller – the professor clearly overstepped the mark in his comments on Bristol’s Jewish students. If instead of Jews, he had attacked members of the black community or British Muslim students in a similar fashion – he’d have been fired the same day. We all know this is true, but because Miller attacked Jews – he didn’t just avoid sanction – he has a support network.

The organising group for Friday’s event was ‘Labour Campaign for Free Speech‘, which like ‘Labour Against the Witchhunt’ appears to be just groups of people who want to freely attack Jews with impunity and are annoyed that currently there seems to be a price to pay for doing so.

The event was mainly attended by ‘suspended’ or expelled Labour Party members and their friends. People who in many cases were caught sharing antisemitic posts or commentary – and want to blame the ‘bad Jews’ for the situation they find themselves in.  Attendees included well-known Labour antisemitism figures such as Tina Werkmann, Moshe Machover and Jonathan Rosenhead. Approximately 150 people attended in total. 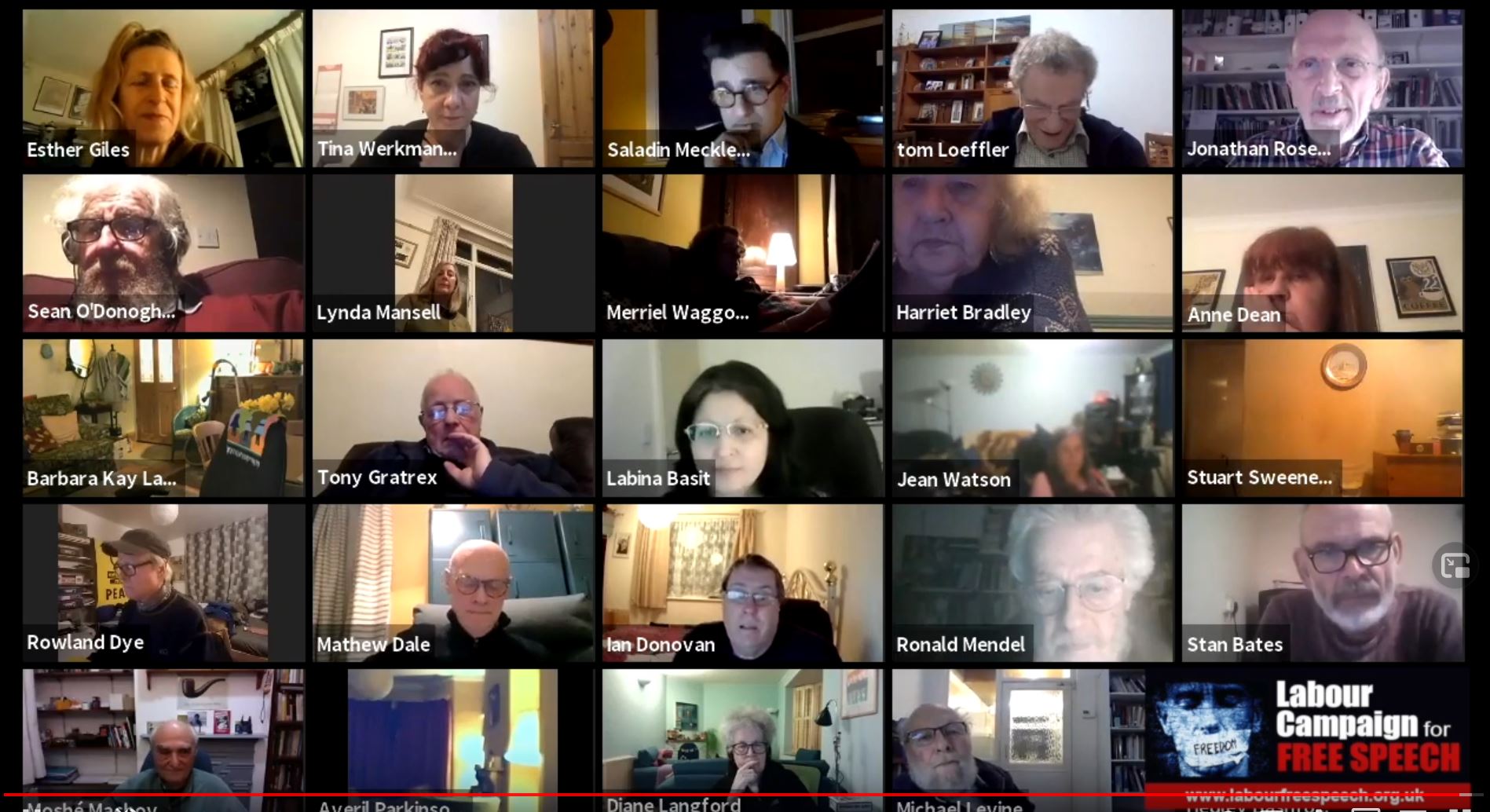 The list is long. Other familiar faces included antisemitic conspiracy theorist Tony Gratrex of Palestine Live fame – and long time anti-Israel activist Tony Greenstein. It was Tony Greenstein who made the message stream the most colourful with his talk about CST and their ‘strong connections’ to the Mossad:

The speakers told the usual lies about the IHRA, spread disinformation about Labour’s antisemitism – and some made the most outrageous of remarks. The truly frightening thought is that some of these people used to be Councillors or hold posts in their local constituency party. One of them stood to be Treasurer of the Labour Party in the 2020 NEC Elections.

Steven Burgess (Labour Left Alliance Manchester) went on some absurd rant about how the IHRA doesn’t explicitly find Adolf Hitler guilty of antisemitism. Does all this actually make sense to him in his head? These people have lost themselves completely in a conspiratorial, nonsensical mess. I felt a high sigh of relief when the event eventually finished. This sewer is toxic.

Saturday was a day spent crunching the 200+ names on the published academic letter of support for David Miller. I had to make sure that all of the names included have been captured by my wider research into academic antisemitism.

There were few surprises in the letter. Even convicted IRA terrorists such as Feilim O’Hadhmaill made sure David Miller knew they were behind him. Chomsky, Pappe, Norman Finkelstein, Bazian, Pilger, Butler, Bresheeth – all the usual names appear along with some we are not so familiar with. Originally, there were claims that some of the names were there without consent – the list disappeared – and returned with some names edited out. Jonathan Hoffman spent much of his weekend – going through the latest list – and published a blog on what he found.

Antisemitism aside – what I find amusing is the duplicity and hypocrisy of some of those who signed the support for Miller. They are arguing in this case that academic freedom is paramount – and no matter what – should never be infringed.

Unless of course, you are an Israeli academic. Because many of these names are also on endless letters and petitions calling for an academic boycott of Israel. It seems their belief in total academic freedom doesn’t stretch as far as their antisemitism.

Ismail Patel is even on the list. Chair of Friends of Al Aqsa and supporter of terrorists. Academic freedom? This man supports blasphemy laws and has written that adultery is a crime worthy of a death sentence! Do they not understand how ridiculous this is? Ismail Patel doesn’t support academic freedom – he is demanding the right to be racist against Jews.

Sunday afternoon there was an anti-Israel event about British volunteers in the Israeli army. Because these haters think that Israel is a rogue terrorist state – they believe that British people who volunteer for the IDF – are the same (or even a lesser evil ) as British radical Islamist extremists who went to fight for ISIS. I took this one a little personally, seeing as my daughter is currently serving in the Israeli army as part of a lone soldiers program.

The speakers were Haim Bresheeth, Tom Suarez and Wafa AlUdaini. The Chair was Mick Napier. The event was organised by –

These type of events are my home turf. Napier, Chair of the SPSC opens the event, Bresheeth (JNP) speaks first, then Al-Udaini (a ‘Journalist’ from Gaza), followed finally by Tom Suarez. It only lasts one hour but not a single minute passes without major lies being told to the audience. It was relentless.

The modern focus was on lone soldier Lian Harush, who successfully thwarted an attack by a terrorist before her commander neutralised him. Of course, at this event, all the context is removed – and all the viewers are told is that Harush assisted in ‘murdering’ a 17-year-old boy. Lies, lies, lies.

These people just do not know how to tell the truth. Every quote is mangled, every fact distorted. When they try to recount historic events, it is *at best* nothing more than cherry-picked half-truths. Suarez once wrote a book on the history of the British Mandate that was little more than a web of antisemitic lies with punctuation.

After a while, it becomes clear that none of the speakers is actually knowledgable about the current Israeli army volunteer programs at all. The entire event is a mess, with speakers who only turned up because they want to suggest that a British Jewish volunteer in the Israeli army is worse than a radical Islamist heading off to fight for ISIS. And of course, they want to continually draw parallels between Israel and Nazi Germany. Totally incoherent, antisemitic, bunkum.

The one speaker who warrants special mention is Wafa Al Udaini. I have come across Al Udaini before and she is clearly linked to Hamas. Her tweets are full of praise and propaganda for the terrorist group:

Al-Udaini opened a new FB profile in 2019, so we cannot tell what was in her older account. In 2019, she was leading a propaganda effort to interfere in the UK election. Al Udaini was the admin for the FB group of KhamakarPress. Al-Udaini is also connected to the 16th October group. Both these propaganda outfits are tied into the Althora Foreign Media outlet – which again has Al-Udaini as a senior figure. The main website was run by Hoda Naem – a Hamas MP. Wafa Al-Udaini is clearly a Hamas propaganda mouthpiece.

During the 2019 election, Khamakar Press would give orders to online propaganda agents to either attack those against Jeremy Corbyn or defend those defending him. The online response was relentless and overwhelming. There is an army of online trolls at their disposal.

‘Coincidentally’, AL-Udaini is often the first person in Gaza to spread propaganda photos after an Israeli retaliatory strike. Always the first on the scene. This person is in the pocket of the radical Islamic terror group Hamas. This is probably why the Islamists of the IHRC and their friends like her so much.

The event finished without audience questions being tabled at all. The two platforms – YouTube and Facebook only managed to draw a total audience of 60 combined. That’s the draw from the IHRC, SPSC, JNP and Inminds. A truly pathetic turnout. It seems – that even in the extremes – these people are now a step too far for most. It does show that the intense campaign to expose the toxic truth about them, is having an effect.

That was my weekend. Now I am ready for the relentless stream of toxic events this new week will bring.

181 thoughts on “Weekend at David’s. Relentless attacks – on Jews, Zionism and Israel”