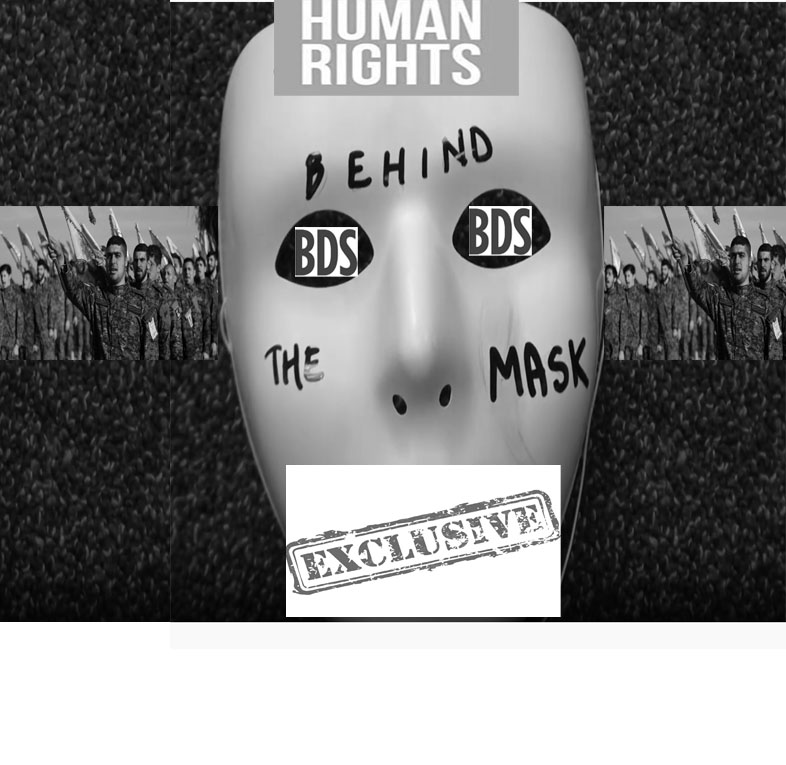 I have called the boycott movement against Israel (BDS) the ‘siege engine’ of the radical Islamic terror groups. Read this exclusive (Israel Coalition) research that proves that the BDS movement is part of the machinery of war:

The Global Campaign to Return to Palestine

There is an NGO that acts as an ‘umbrella group’ for a global network of Palestinian solidarity organisations. It is called ‘the Global Campaign to Return to Palestine‘. The Facebook page in English has 95,000 likes. There is an Arabic page as well (792,000 likes). The main website is in Arabic. The NGO was set up in 2013 in Beirut.

There is a small private Facebook Group – the GCRP Working Group, which is run by ‘Mohammad Abo Alabed’ who is based in Beirut. Alabed’s timeline is full of pro-Assad, Islamist, terrorist-supporting messaging.

The key individual of the GCRP is the General Coordinator, Sheikh Yousef Abbas.

Whilst digging for more on the Sheikh I discovered that when he is not ‘General Coordinator of the Global Campaign to Return to Palestine’, Yousef Abbas is ‘President of the Syrian Islamic Knowledge Foundation’. In this role he says:

“Support for the Palestinian resistance and its people until the final victory over the Zionist enemy is achieved.” (2018 interview with the Iranian Islamist news outlet ‘Taghrib News’)

His output is always Islamist facing – and the only interviews of him are on pro-Hezbollah, pro-Iranian outlets such as Al Mayadeen. The Sheikh is a pro-Iranian / Hezbollah Islamist and clearly part of the Iranian support network in the region.

The friends of the Sheikh

If you are a leading member of an Iranian-supported Islamist terror group in the Middle East – Sheikh Yousef Abbas is probably on your list of friends. 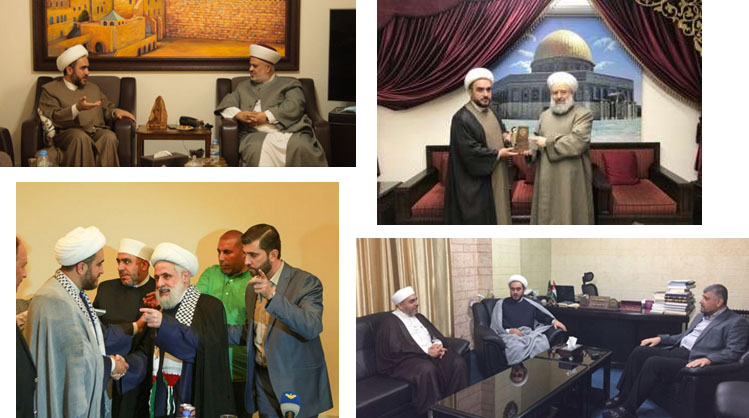 He was also given the stage in Tehran at the 6th International Conference to Support the Palestinian Intifada: 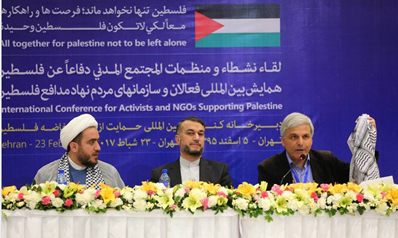 Sheikh Yousef Abbas is the face of the Global Campaign. The GCRP boasts that its network has spread across the globe. As you can see from the map – outside the Arab and Muslim world, the focus is on nations considered friendly towards Israel:

The key goal of the GCRP is to create a network that disseminates strategic news across the globe. This is a laundering house. It takes the words and will of the radical Islamic terror groups – and transforms it into propaganda for solidarity movements to sell as peaceful BDS initiatives.

The launch event and the Scottish Labour MSP

The GCRP launch event happened in November 2013 in Beirut. The Scottish Labour MSP Pauline McNeill attended the event. Important to clarify that whilst still inexcusable – she was between her stints of public duty and not an MSP at the time.

I found no public clues on her social media that she was attending. Unlike the times where McNeill has visited Lebanon and posted several propaganda images, – this time – aside from a mention of her landing at Heathrow – there was nothing:

But McNeill was definitely there. She is the woman on the right in the photo:

According to reports from the event, there were about forty attendees. These include key representatives from Hezbollah and Islamic Jihad. Alongside the proscribed terrorist organisations (Hezbollah were not fully proscribed at the time) were leaders from Islamist activist organisations who came in from Syria, Yemen, Malaysia, Indonesia, Jordan, Tunisia, Egypt, Kuwait, Turkey Iran and Pakistan. Extremists from Lebanon and Syria activist groups seem to have made up over 25% of the attendees. Translation of names was problematic, but each time I managed to firmly identify an attendee, they were found to support violent resistance and the Assad – Iran – Hezbollah triangle. Examples include Hala Al-Asaad, who founded a ‘resistance university’ in Syria (Al-Asaad is the woman to the left in the image above).

The two men to the right of McNeill were also identified. One was Ahmed Hashimi, an ex-leader of Jamaat-e-Islami – which seeks Islamic revolution in Pakistan and to turn Pakistan into an Islamic state ruled by Sharia law. The other was Sabir Ijaz from the ‘Palestine-Pakistan Foundation’. This is the banner at the top of the organisation’s webpage :

This is Hezbollah’s Ali Fayyad at the event. 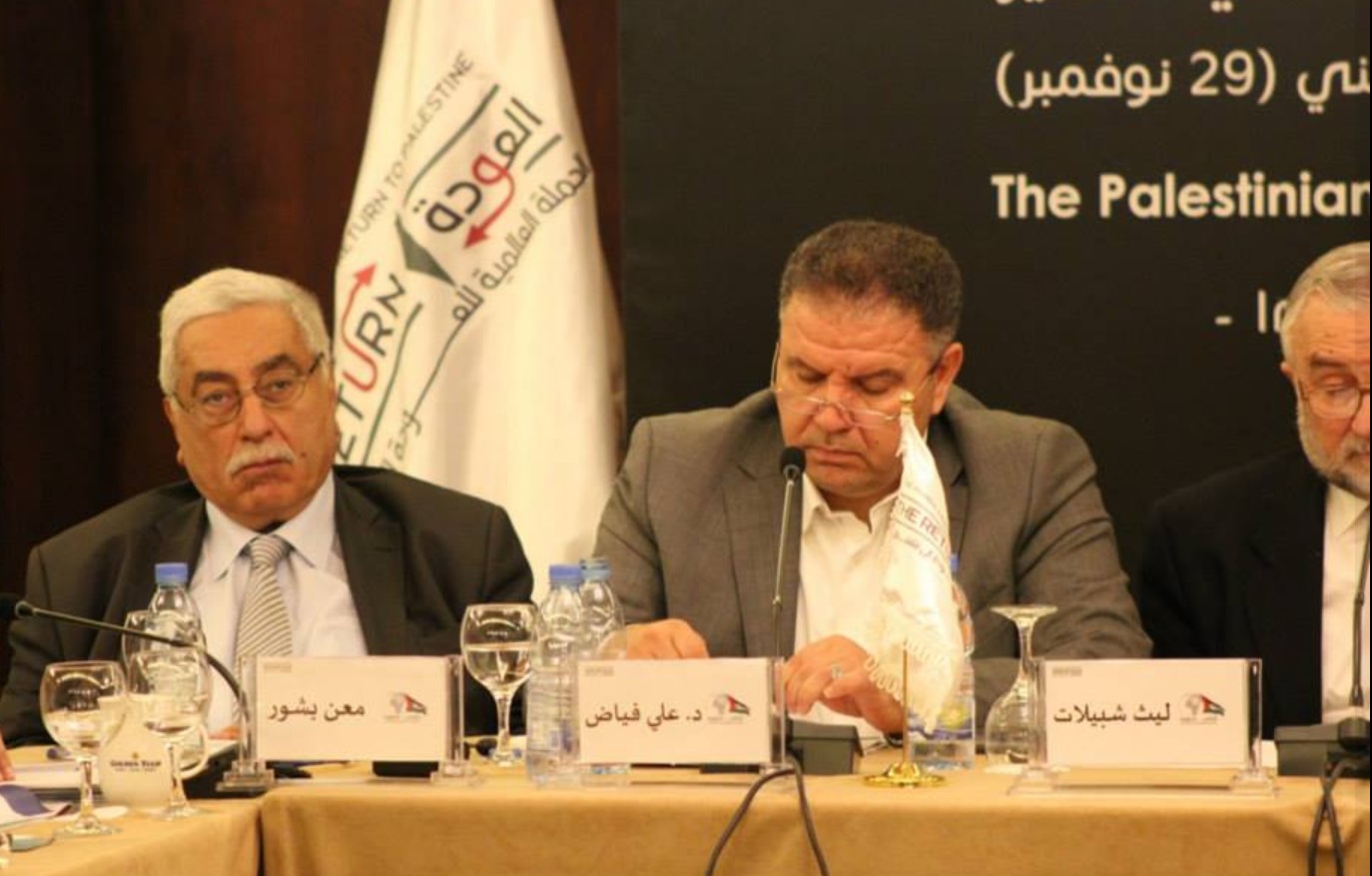 Ali-Fayyad is in the centre. To the left is Ma’an Bashur – former General Secretary of the Pan-Arab Conference. Bashur has a long history of support for terrorism. To the right is Jordanian Islamist Laith Shubeilat – who has spent time in jail for his opposition to Jordan’s peace deal with Israel.

No wonder McNeill speaks in such toxic tones about Israel when she delivers speeches to the Scottish Parliament.

Kevin Ovenden an organiser of Viva Palestina and a key member of George Galloway’s RESPECT fan club was also there. This is a picture taken at the event. Ovenden is sitting at the left in the photo:

The person to the right is Tunisian Ahmed Kahlaoui. He believes that any people who want to make peace with Israel should be slaughtered:

The concluding statement by the conference participants was clear and gave support to resistance in all its forms (“full solidarity in resisting the Zionist occupation”).

McNeill was contacted for comment – but has yet to respond.

At the second international forum for solidarity in 2014, the terrorist organisations were all at the top table.

These so-called civil society organisations include leading BDS-promoting groups in the west. They claim to be ‘peace activists’ – but have no trouble associating with -and taking directions from – leaders of proscribed terrorist organisations.

The third conference and the Scottish attendees

The GCRP third conference in 2015 was no different. It was again in Beirut and again played host to key leaders from all of the radical Islamist terrorist organisations.

Mick Napier from the Scottish Palestine Solidarity Campaign was one of two SPSC activists to attend:

This was a meeting that was led and controlled by radical Islamists and terrorist organisations. Note how Napier refers to it in his post as a ‘BDS’ conference. He posts just one image – of himself and fellow SPSC activist Issam Hijawi with Ahed Tamimi. 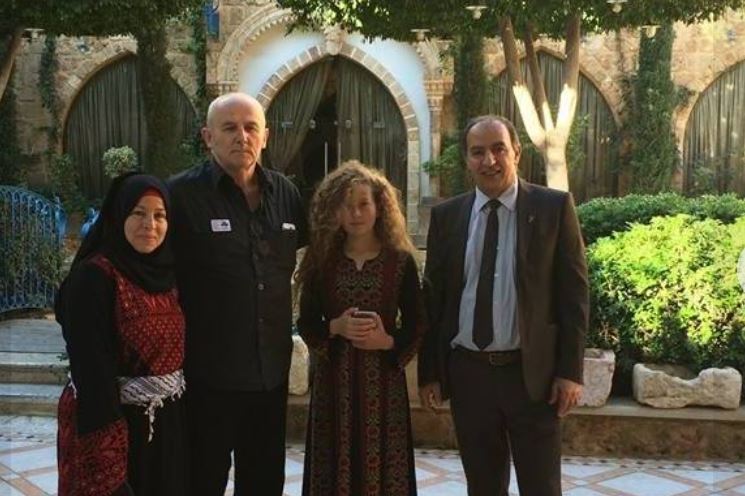 It is important to note Tamimi spoke at the terrorist conference. She plays ‘Ms Innocent’ to western audiences and then stands proudly alongside genocidal terror groups: 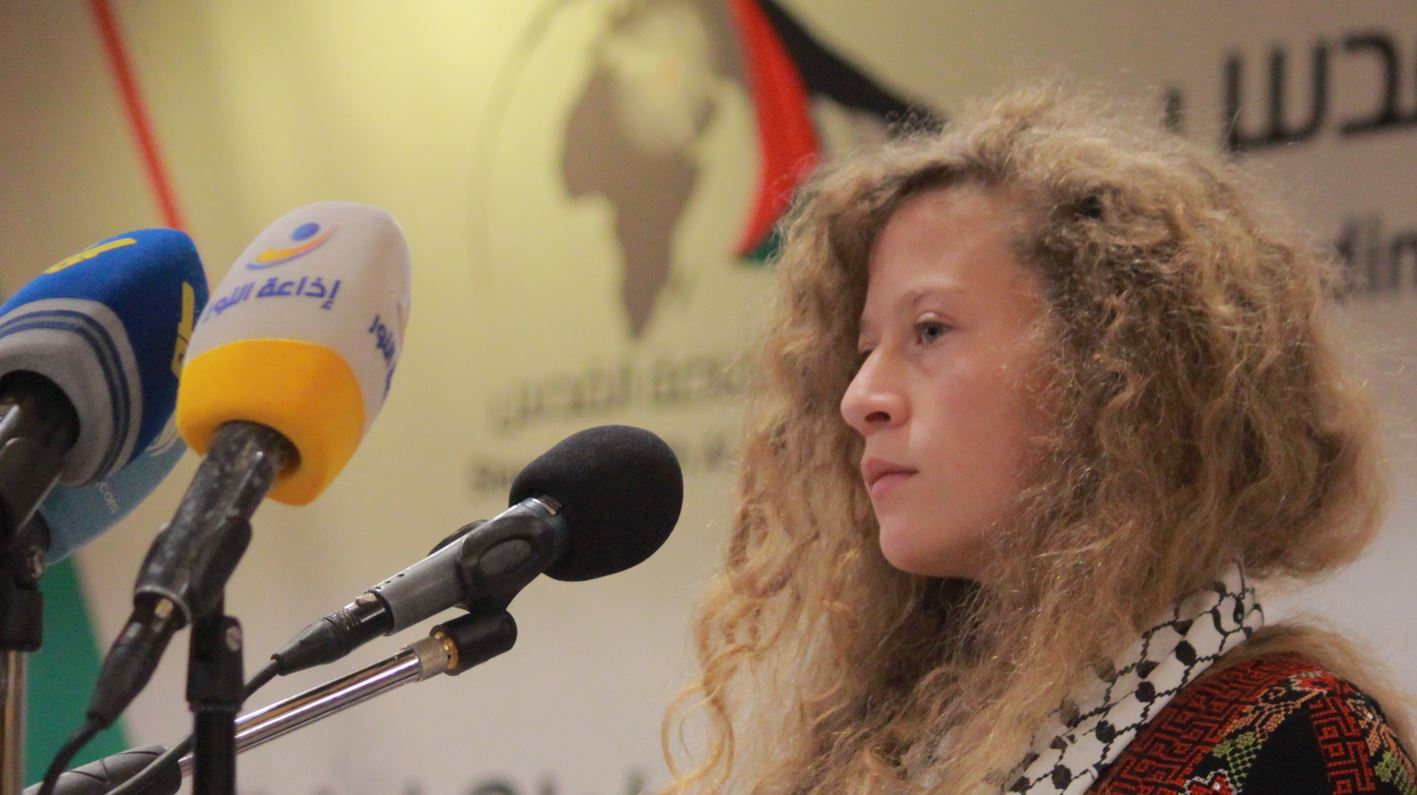 Attendees and speakers included Deputy Secretary-General of Hezbollah Sheikh Naeem Qasim, Vice-President of Islamic Jihad (now President) Ziyad-Al-Nakhalah and Hamas’ representative in Lebanon Ali Baraka. Hamas’ leader Ismail Hania addressed the conference through a video link. As was the case in the earlier conferences – terrorist supporting Islamists arrived from around the globe.

At least Joshua Brown is more honest than Napier. While Napier concealed the true nature of the event, Brown tells the world that the conference is about ‘standing with the Al Quds intifada’. This was a violent, murderous episode in late 2015 – that saw Palestinians attacking Israelis and brought fears of a fresh widespread uprising.

This time the conference began by handing out awards. Gilad Atzmon and Jocelyn Hurndall both received one. 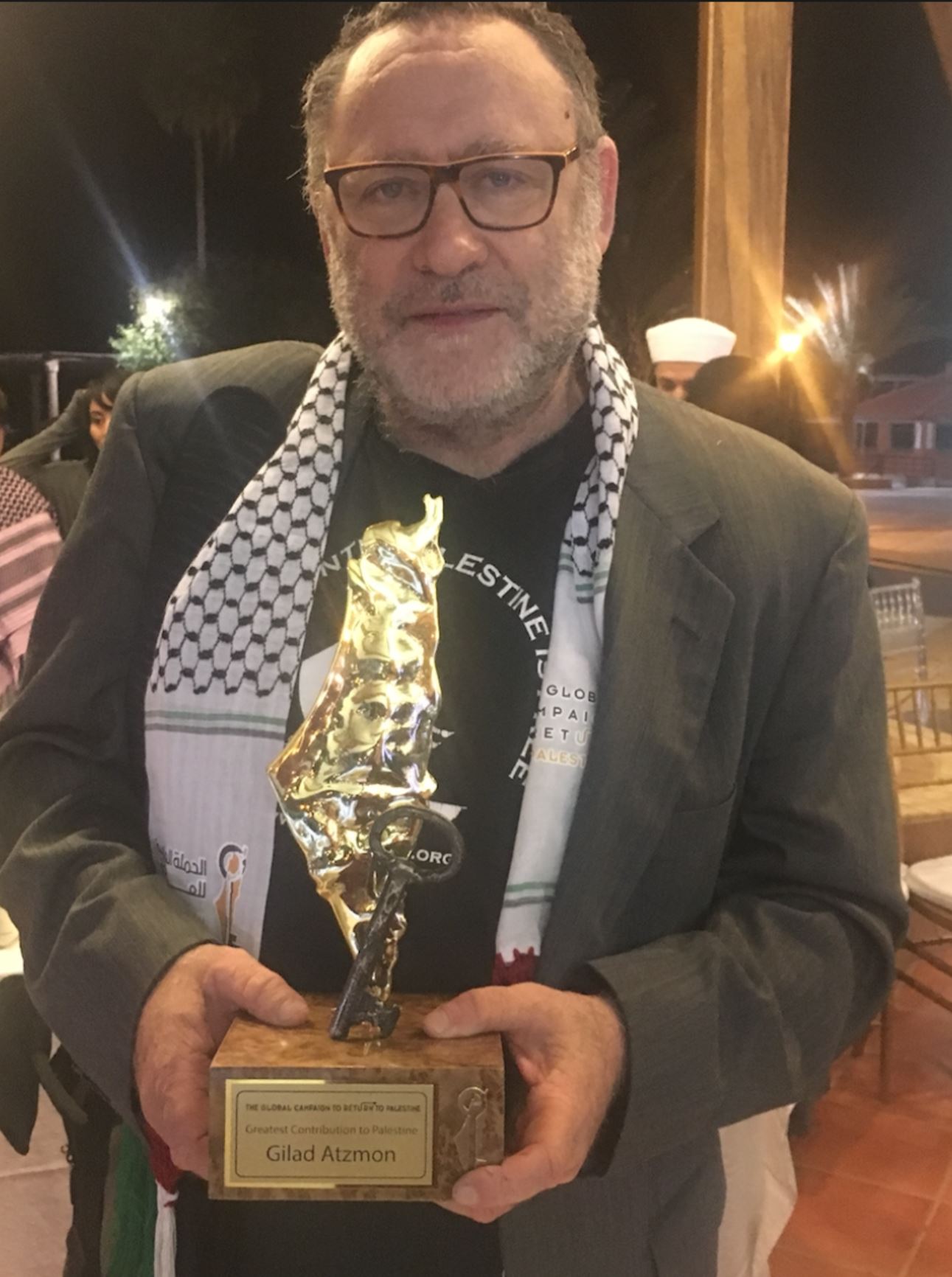 Hurndall also spoke in the closing session of the event. Others from Scotland also attended. Azzam Muhammad from the Muslim Council of Scotland was there. It seems from the attendee lists that Azzam has participated in at least three of these conferences – including the founding one in 2013. Karen Bett from the Scottish Palestine Solidarity Campaign also made her way to the conference: 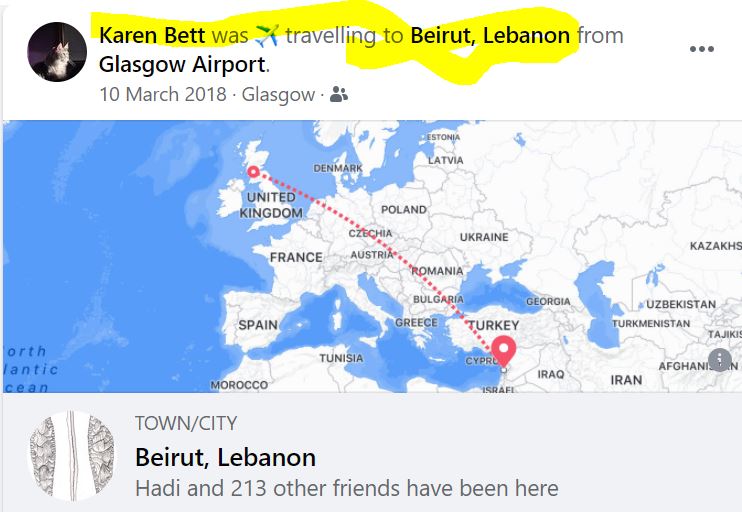 There is live footage for anyone who wants to see other extremists (and who understand Arabic) who made their presence felt. This is a picture of Deputy Secretary-General of Hezbollah Sheikh Naim Qassem speaking at the event: 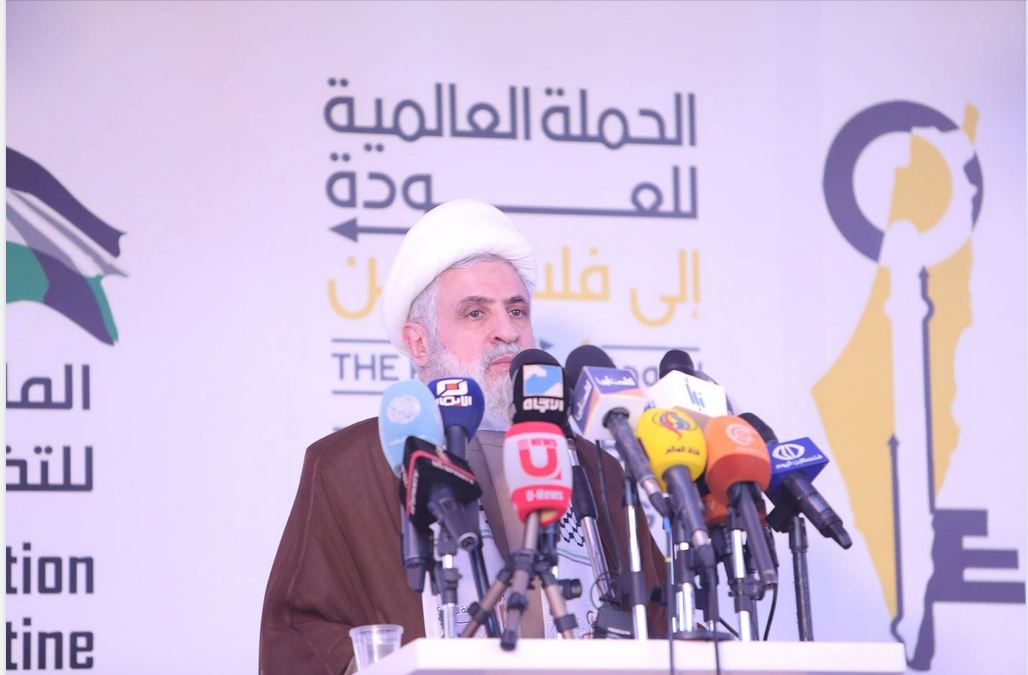 Because of Coronavirus, the most recent Global Campaign conference was held in January 2021 in semi-virtual settings – with events running in parallel in Gaza and in Tehran: 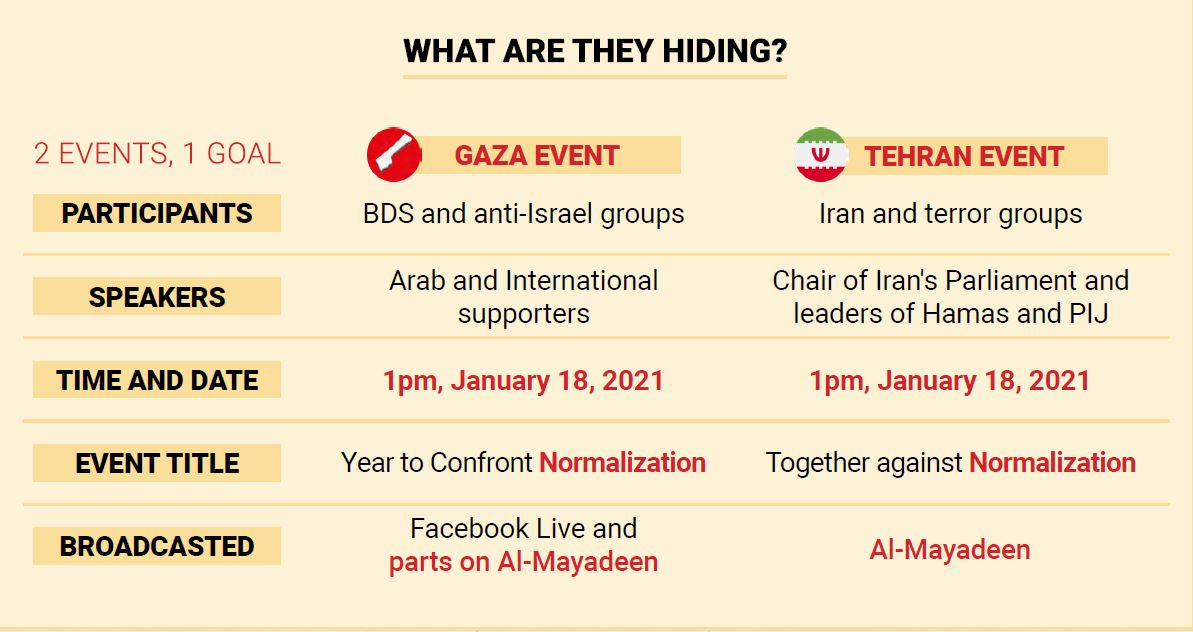 One of the upsides of holding the event virtually was the amount of information provided online – such as the list of speakers. It provides a much clearer image of the type of radical Islamist ideology driving the group and their events: 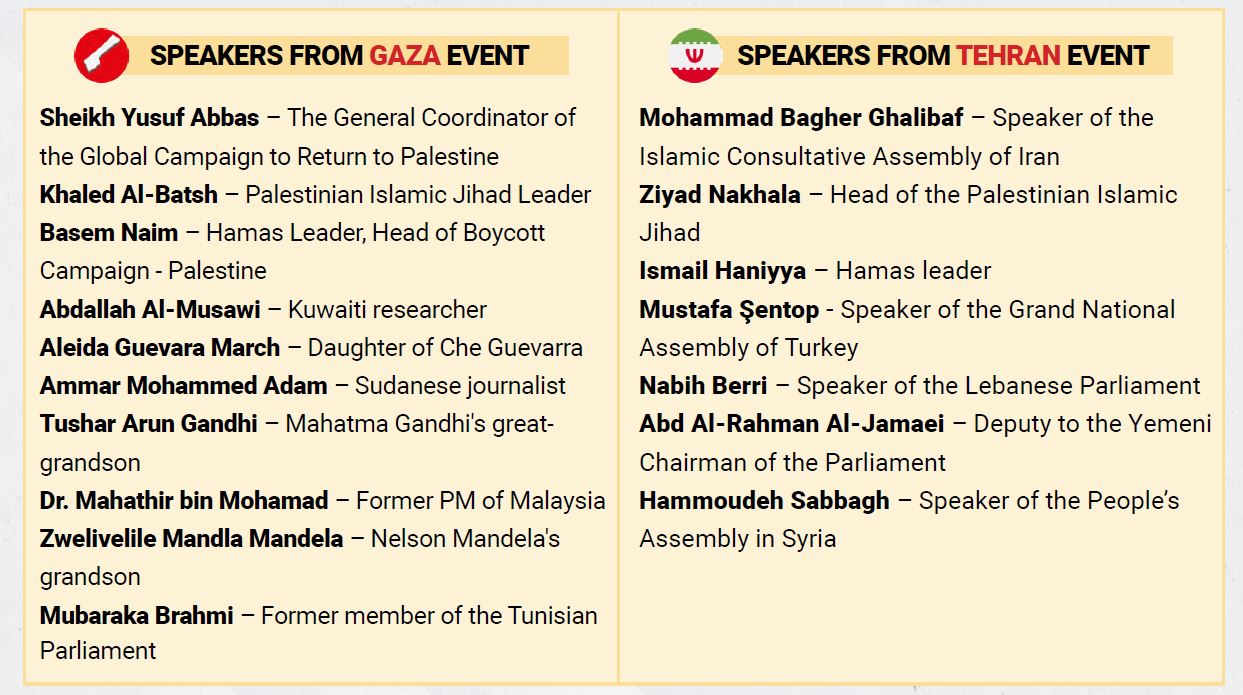 The flyer promoting the event provided a list of supporting organisations. These include:

All of these organisations deceptively promote BDS as part of a *non-violent* struggle – while simultaneously aligning with terrorist groups. There can be no excusing people attending events with speakers who openly support terrorist violence. People like Napier and Bett from the SPSC refuse to sit in a room with Zionists – but travel 1000s of miles to cosy up to radical Islamic terrorists and their supporters. Pauline McNeill the MSP – how can she justify attending events with any of these people?

Others who attended these events include Allison Weir (If America Knew) and Paul Larudee, both well-known faces of US-based, extreme anti-Israel activism. Eva Bartlett (Canada) and Vanessa Beeley (UK) are two other well-known activists who attended.

Here is Bartlett, Beeley and Larudee at the conference with Feroze Mithiborwala in 2015: 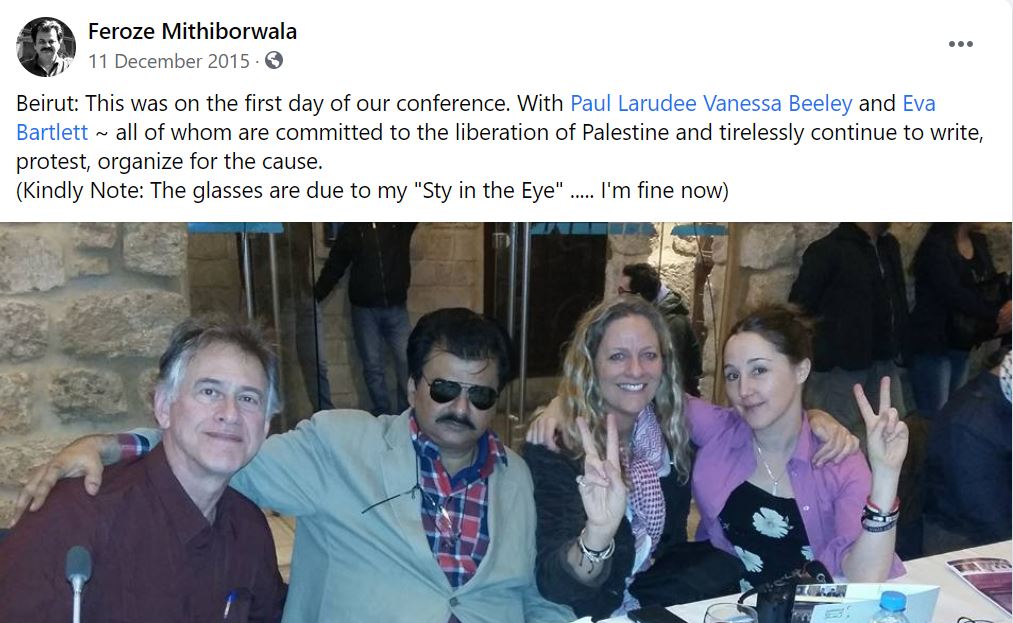 Mithiborwala who posted the image above on his FB page is not just an ardent supporter of radical Islamic terror groups, he is also a vile antisemite: 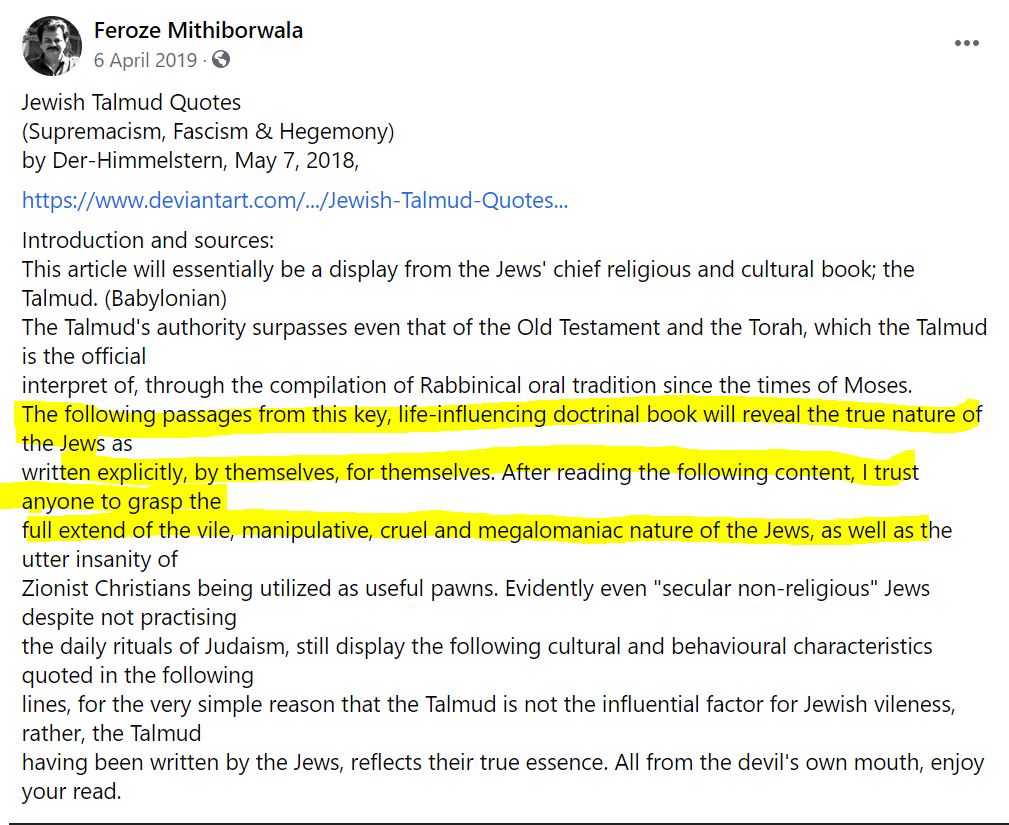 BDS is an arm of the terror groups

Given all the evidence, it is clear that the terrorists and their supporters that dominate the GCRP and its events are not hangers-on but rather the driving ideology behind the entire project and its goals.

Take a look at this image: 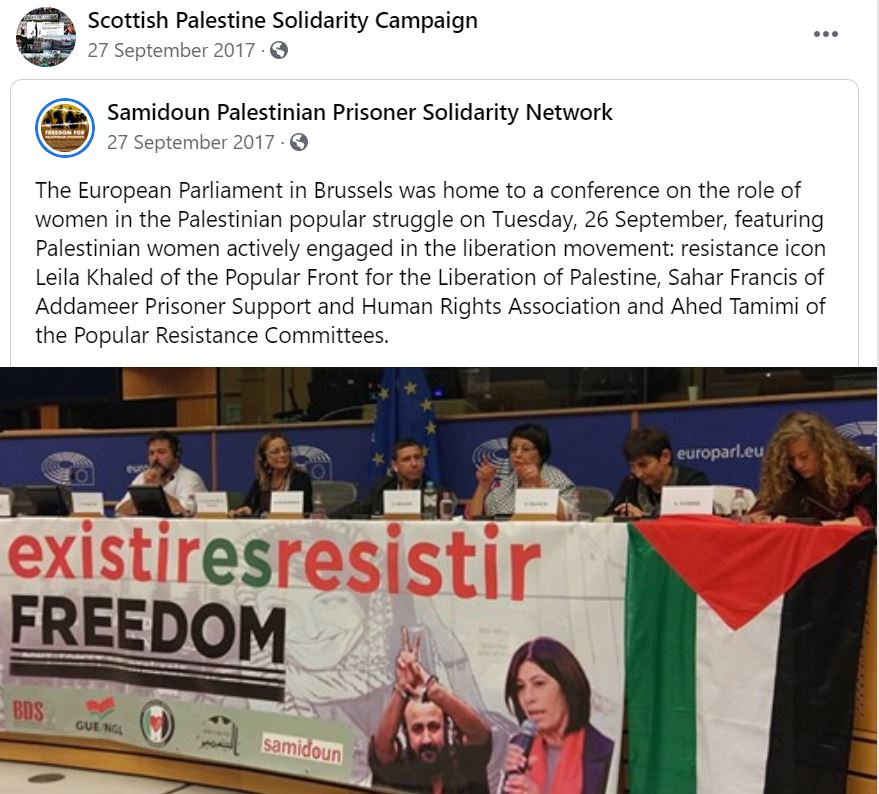 The GCRP now spew out an endless stream of propaganda via their outlets and their material is shared relentlessly in online anti-Israel groups: 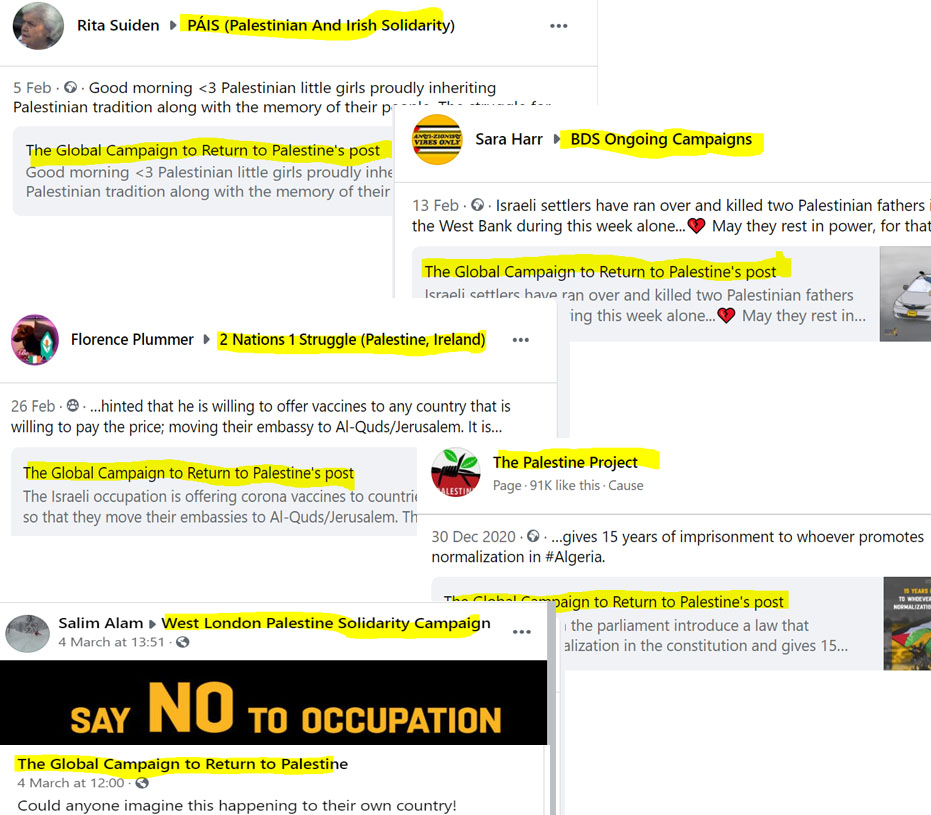 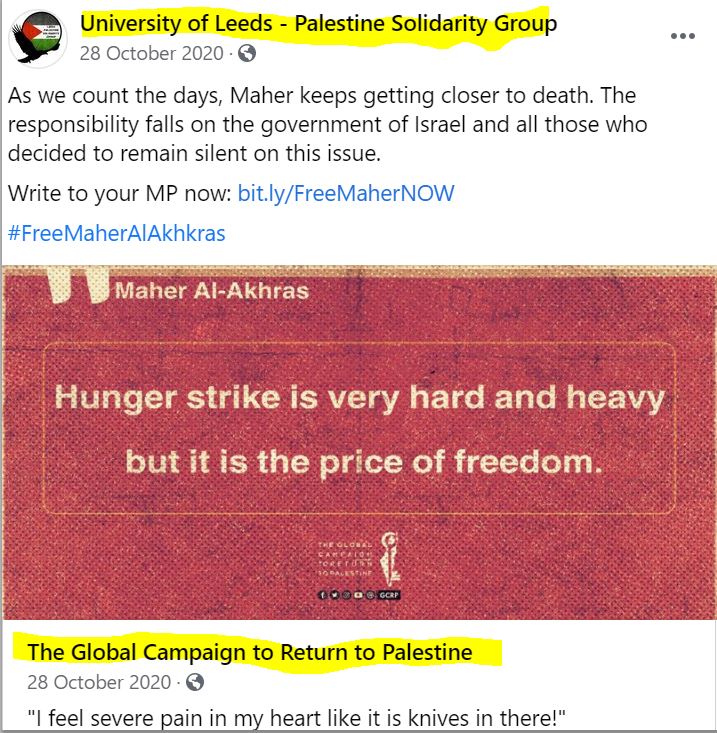 The openly stated goal of this terrorist support network is to use participants in its events as tools to spread the word across the globe. The images above shows both how it works – and more scarily, how well it all succeeds. This is from the closing statement at the launch event:

The evidence is all here. Using solidarity movements as proxies and hiding behind human rights keywords, radical Islamic ideology spreads into our high streets and onto our university campuses. They turn up with catchy slogans such as ‘Apartheid week’ or ‘BDS’ – but the driving force behind all this is a radical Islamic genocidal force that seeks to destroy the Jewish presence in the region – simply because it is Jewish. This has nothing to do with human rights. It is a key element in a radical Islamic holy war.