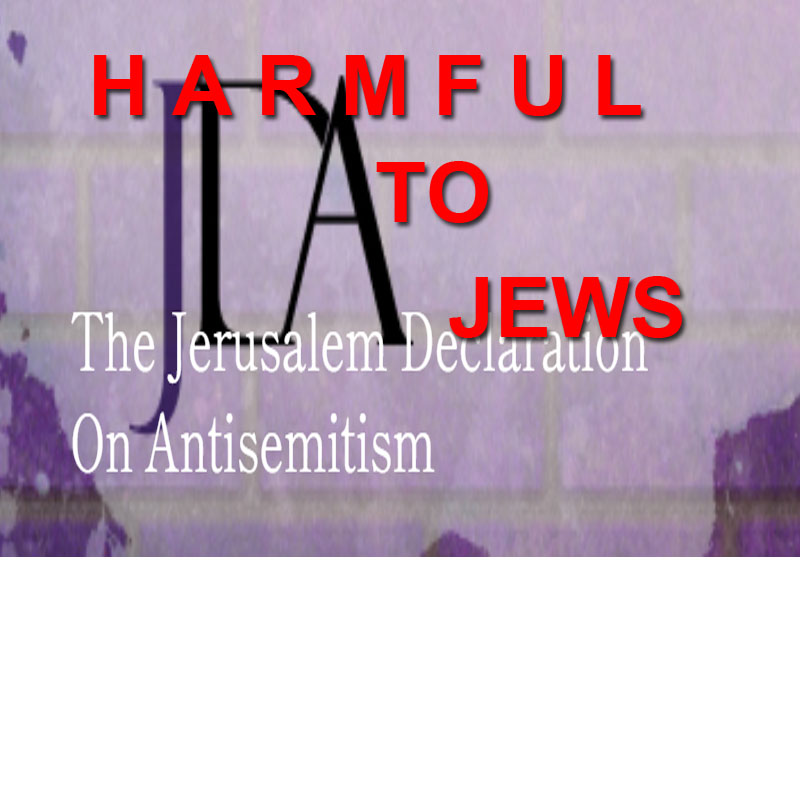 The Jerusalem Declaration on Antisemitism – harmful to Jews

In reality, all this definition does is allow antisemites to get away with abusing Jews.

Recently a definition of antisemitism called the Jerusalem Declaration on Antisemitism was published. It presents itself as an alternative to the internationally accepted IHRA definition.

The birth of the Jerusalem Declaration

The seeds of the Jerusalem Declaration were planted in London and Germany. In the UK, there was the government-encouraged adoption of the IHRA by several universities, most notably UCL in London. In Germany, the Government has been restricting BDS activity, designating the movement antisemitic, and withdrawing all financing for groups that promote the boycott of Israel. This gave rise to a movement of academics that sought to oppose the move.

The reason the adoption at UCL is so important is that after it was adopted, several academics launched a fightback. The UCL Academic Board (the body of UCL academics) met and rejected the IHRA, demanding that the university ‘replace it.’

The key organiser of the UCL academic pushback was Seth Anziska. Anziska is an academic protege of Rashid Khalidi, a former spokesperson for the PLO in Beirut:

Anziska is a revisionist historian. He also spent some time in Beirut and his writing is just a list of attacks on Israel in academic prose. When Khalidi’s own credentials were attacked, it was Anziska who came to his defence. This means that the person who led UCL’s examination of the IHRA definition of antisemitism, spent years being academically shaped by an ex-PLO spokesperson.

The main problem with UCL’s pushback was that there was no alternative to the IHRA definition for UCL to adopt in its place – so it seems Seth Anziska made it his business to help create one. The result is the Jerusalem Declaration.

Like most hard-left propaganda exercises, they manipulate the title to add a faux legitimacy – ‘Jerusalem’ has very little to do with it – but it sounds Jewish and authoritative.

The declaration has its own website, which was purchased just three weeks ago. It sets out to be used in place of the IHRA definition. This is from the preamble:

‘We propose our non-legally binding Declaration as an alternative to the IHRA Definition.’

The basic premise behind the whole exercise is flawed – in that it suggests the IHRA definition threatens ‘free expression’. The inability of the IHRA to protect Jewish students at Bristol, or enable Bristol university – which has adopted the IHRA- to deal with the antisemitism of Professor David Miller highlights just how much of a straw man argument such a premise is.

The definition goes on to create enough windows for almost every antisemite who isn’t doing a Nazi salute to freely climb out of. One way or another, almost everything becomes excusable. The definition includes the usual hard-left ‘all racism matters’ doublespeak that renders everything written almost unintelligible. It makes it of no more use to a victim of anti-Jewish racism than a bacon sandwich on Yom Kippur.

No other minority group would have a definition of racism about them written specifically to permit much of the abuse they suffer. Only with anti-Jewish racism do people feel the need to write definitions to carefully protect the racist.

Because the Jerusalem Declaration arises from within an Israel-hostile or antiZionist ideology, it allows for hard-core antiZionist ideology to run free. It is a definition of self-preservation, written in the knowledge that they are losing the battle. It cedes some ground deliberately, in order to avoid losing the war. This makes it inherently self-contradictory:

For example, it seems to support Israel’s existence but doesn’t, using doublespeak to create windows of antisemitic opportunity. This is one of the examples given of what constitutes antisemitism:

It may sound nice, but it removes the right to Jewish self-determination – which makes it self-contradictory. Jews do not have the right to exist and flourish in Israel (which is the overwhelming choice of Israelis) if Israel can be taken away from them under an externally created and artificial demand for equality. Destroying Israel under a faux banner of equality is the goal of BDS, which of course becomes allowable under the new definition:

This also fails a basic test in that it doesn’t seem to understand real racism at all. Discrimination – the most basic of racist attitudes – is missing from the definition. Logically, if the authors accept that some verbal attacks on Israel are driven by antisemitism – then holding Israel to a double standard is on its face unfair, and becomes an obvious red flag of anti-Jewish attitudes.

The ‘double standard’ element that is specifically included in the IHRA is a glaring omission in the Jerusalem Declaration – and one that renders it useless.

Why on earth is it okay to treat Israel differently?

Imagine this playing out in a non-Macpherson world. The MET Police would be free to remain institutionally racist and to continue to pick on BAME communities and discriminate, as long as no member of the police force actually said something that was blatantly racist.

Another inexcusable failure occurs because the Jerusalem Declaration allows for Israel/Nazi comparisons in that it suggests that ‘criticism that some may see as excessive or contentious’ is not antisemitism. Nazi comparisons, therefore, become excusable.

That position is absurd and such standards do not apply to racism against any other minority group. If the Jerusalem Document actually saw itself as an educational instrument, it would certainly have included Nazi analogies. The fact it does not – highlights that it was written to allow antisemites to be freely antisemitic.

Three of the authors, Elissa Bemporad, Alon Confino and Derek Penslar wrote an introductory article in the Forward. Written in the article are the words that expose the Jerusalem Declaration for the insidious, hard-left and dangerous document that it really is. This is the fourth paragraph in the article:

This paragraph makes the authors sound like hard-left Corbynites. They accept there may be some problem with antisemitism on the left, but they want us all to deal with the real antisemitism – the ‘most dangerous threat’ – which is on the right. That is undeniably a politically loaded statement that immediately exposes the true intentions and political leanings of the authors. It is also demonstrably not true.

The most dangerous threat to Jews today comes from Islamist antisemitism – which notably the authors do not even reference. And because Islamist antisemites in the west, if they do vote, tend to ally with hard-left political elements, this has created a very potent and dangerous alliance.

Beyond the threats of white supremacy, the authors clearly do not understand modern antisemitism at all – and they show themselves to be little more than political activists who have taken it upon themselves to protect their own section of the political spectrum by selling out the majority of Jews.

Two of those authors-

Alon Confino has drawn parallels between the Holocaust (the industrial slaughter of the Jewish people) with the Nakba (the result of a tiny civil conflict that the Arabs sought and lost). Confino was one of the Israeli academics who tried to STOP Germany from introducing anti-BDS legislation. He also signed a letter calling on Tel Aviv University to boycott excavations in the City of David, suggesting the work was attempting to ‘Judaize the area’.

Elissa Bemporad signed a letter attacking Israel for blocking prominent BDS activists from entry into the country. Why on earth should any nation let foreign nationals enter, when their only intention once inside, is to do that nation harm?

The Jerusalem definition has eight ‘coordinators’: The bias of Seth Anziska and Alon Confino has already been discussed.

Emily Dische-Becker is a journalist who often pushes harsh anti-Israel commentary – such as this article she shared written by an antiZionist declaring that Israel is obviously an Apartheid state:

Amos Goldberg wrote an article published in the anti-Zionist 972 Magazine, in which he pushed the blatant lie that the IHRA definition sets out to “shield Israel from all criticism”. The article also refers to non-Israel related antisemitism as ‘real antisemitism’. Goldberg also signed the letter defending BDS against German legislation. Stefanie Schüler Springorum also signed the letter in Germany. Brian Klug was a signatory to the declaration of the hard-left group Independent Jewish Voices in 2007. He has also argued against the very notion of ‘new antisemitism.’ David Feldman was vice-chair of the Chakrabarti enquiry – which led to a total whitewash of antisemitism in the Labour party.

What there isn’t in this far-left group that wants to water down the IHRA definition – is any real ideological dissent.

This is why its supporters include people such as Jackie Walker:

It also explains why anti-Zionists and One-State absolutists such as Peter Beinart and Neve Gordon – alongside other toxic academics such as Richard Falk – have all signed it.

Other notable signatures include Sergio Luzzatto, who endorsed and then defended the infamous book, Pasque di Sangue (Passovers of Blood), which claimed that there was truth in the Passover blood libel.

Let’s face it – if Jackie Walker and Richard Falk support your definition of antisemitism, you have taken a seriously wrong turn.

For decades, little attention was paid to antisemitism in anti-Israel activism, and this allowed antisemitism to spread virtually unchallenged – in politics, on the street and in academia. On many campuses, antisemitism became the norm and it became so embedded that those challenging it were seen as the oddities or extremists.  The much-needed IHRA definition was introduced to help to educate and stem the tide.

The only thing the Jerusalem Declaration does is try to muddy the waters to the point that everything can slip through the net.

936 thoughts on “The Jerusalem Declaration on Antisemitism – harmful to Jews”