Today – tens of millions of people – including many children -will type something into Google’s search box. Because of Google’s algorithm, a Wikipedia entry will almost always feature as one of the top results:

It has probably held true for a number of years that more people have their opinion shaped by Wikipedia on a daily basis – than by any other information source. I do not believe that most people fully understand the damage that Wikipedia is doing, nor the fact that action must be taken to challenge it.

When I write about Wikipedia, I always face the same three arguments:

Firstly the idea that everyone can edit Wikipedia. It is simply not true. Everyone can go onto a mundane page and make an edit – but the more important pages on Wikipedia are protected – which means only certain editors can make a change. These protections do not just stop abuse – they prevent challenges to the bias of the editors.

Secondly, is the notion that because most people know Wikipedia is not a reliable source it mitigates the damage. This is a deflection. Even many of those that know Wiki is tainted, still recommend using it as a starting point – especially teachers and academics. Google, the world’s leading search engine, literally treats Wiki as the best source in the world. All those seeking information by starting on Wikipedia are still guided by the additional links that are on Wiki’s pages – and are left blind to those facts and arguments that have been airbrushed out.

Finally, there is the suggestion that is possible to counter the bias by simply adding editors with a more balanced outlook. There are just 15 million Jews on the planet. Everyone bravely fighting antisemitism online is aware that the haters swarm and we are vastly outnumbered – even with friends and allies. In a numbers game – and Wiki is a numbers game – the Jews will always lose. We desperately need allies to take the time to enter Wiki’s world – but on its own, it is not a strategy that we should depend on.

It isn’t just about Jews or Israel and it is not enough to sit idly by. Wikipedia is *damaging* truth and promoting an anti-western, antisemitic, anti-Israel narrative. This cannot be stated often or hard enough; When it comes to spreading disinformation – Wikipedia is the biggest fake news distributor on the planet.

Wikipedia today is a central conduit in the spread of antisemitism. The lies, propaganda and distortion are visible on every relevant page.

A good example of blatant anti-Jewish bias is contained in the page for the NGO ‘Campaign Against Antisemitism‘.  The ‘criticism’ section on the CAA entry is the largest section on the page. A letter in the Guardian from the usual handful of Jewish anti-Zionist suspects is even considered as evidence. Even more worryingly, the criticism section is placed near the top of the page – preceding the description of much of their work. This goes against all normal Wikipedia behaviour. A reader is therefore presented with what negative critics think of CAA, before reading about any positive contributions they have made. A subtle, but brutally effective strategy in psychological warfare.

Compare that with the page for the Palestine Solidarity Campaign. There is absolutely no criticism on the PSC page at all. None. Every attempt to add criticism to the page has been removed. Anyone who reads about the PSC would have no idea that extremism, antisemitism and Holocaust denial follow the organisation around. A scrawled letter to the Guardian from Naomi Idrissi and her mates was enough to take down the CAA on their Wiki page,  but a detailed investigation of PSC antisemitism by the Evening Standard isn’t good enough to make it onto the PSC page.

The violence at demonstrations, the pro-terrorist ties, none of it considered good enough. The PSC even had their bank account closed because of fears their money was finding its way into the hands of terrorists. And even this isn’t good enough for Wikipedia editors.

This isn’t restricted to a few pages that can be found and cleaned up – but rather infests every part of Wikipedia. Take this example about the group ‘Stop Islamisation of America’. In the intro about the group, someone added the description ‘pro-Israel’, next to the words ‘anti-Muslim’.

It may well be true that those behind the SIoA also have strong pro-Israeli leanings – but it does not define the group or its purpose. This reeks of the hard-left, antisemitic strategy of using the word ‘Zionist’ everywhere possible to create negative associations. The IHRC description I have placed in comparison has no negative introduction – and doesn’t contain the words ‘anti-Israel’ – although this accounts for much of IHRC ideology and activity.

So why one and not the other? The extremist IHRC are the patrons of the antisemitic pro-Hezbollah Al Quds march in London. The association of ‘Israel’ with ‘far-right’ and ‘anti-Islam’ is a deliberate strategy and appears everywhere it can in Wikipedia. It is subtle brainwashing that promotes racial tension and endangers Jews everywhere.

Unlike the CAA page, the Wiki page for the toxic fringe group Jewish Voice for Labour does not have a ‘criticism’ section. On the JVL page, Wikipedia editors created an ‘assessment’ section and hide a few negative voices under a mountain of praise.

The bias is on *every page*. Sometimes obvious, but more often than not – it only becomes apparent when you compare the way different groups are treated. Take this one-to-one comparison between the Jewish Labour Movement and Jewish Voice for Labour. Even if we put aside the fact that JLM is a far more legitimate outfit than JVL and deserves to be recognised as such, Wikipedia editors are clearly doing a hit job on JLM’s credibility, whilst openly promoting JVL. The two entries are incomparable:

The JVL page does now (it never used to) contain some criticism, however you will only find it by wading through a string of high praise. An analysis of the two sections:

The Electronic Intifada page shows just how insidious, the anti-Israel propaganda is. In ‘reception’ (not ‘criticism’ nor ‘assessment’) they actually use a 19-year-old quote from the Jerusalem Post’s *film critic* to imply the Israeli press view the online hate magazine positively:

This is deliberate disinformation. This is not what ‘Israel’ thinks of Electronic Intifada at all. It is a case of ‘grabbing at archives’ – which is a strategy revisionist historians use to distort the truth. They skip over 1000s of sources that argue against them – to find the one outlier that works for them. The Electronic Intifada is an antisemitic conspiracy rag, that is at the forefront of antisemitism denial.  Nobody can add any of this to the Wikipedia page – because it is locked.

Balancing between the Jew and the anti-Jewish racist

Incredible as it may seem, there was a concerted effort by Wikipedia editors to delete the page on ‘Antisemitism in the Labour Party.‘ There is little need to go through a page that tries to maintain a balance between the antisemite and the Jew-hater, but the opening line of the page is still instructive:

The opening line is not only historically false it is a blatant Corbynista narrative. The antisemites argue that Jews only started to care about antisemitism because Corbyn was elected leader. This suggests it is all a political ploy to stifle criticism of Israel. And there it is in black and white as the opening salvo in Wikipedia’s article on the subject. The page even goes on to contradict its own opening line by mentioning incidents that occurred before Corbyn was the leader. Asa Winstanley, the antisemitic propagandist at Electronic Intifada couldn’t have written that line any better.

Language, history, truth – all of it is under attack from one of the most popular websites in the world. And along with antisemitism, it has a distinct anti-western feel. There is a page for ‘Criticism of the US Government’, but there does not seem to be one for Iran, Russia, China or Pakistan. In fact, the only other country that appears to have a government criticism page is ‘Israel’ – and its page is *five times larger* than its US counterpart. The ‘criticism of Israel’ page is highly toxic and even promotes the antisemitic Nazi analogy:

Wiki editors do tell the reader some have said it is antisemitic, before providing a massive paragraph about why the fringe group Jewish Voice for Labour do not think it is. This website promotes antisemitism.

It would be possible to provide hundreds of examples of blatant and inexplicable antisemitism and bias – and trust me, that will come. But for now, here is just one more. There is a page on the ‘Israel lobby in the United Kingdom‘. It lists NGOs like UK Lawyers for Israel, Jewish community bodies such as the Board of Deputies, and even investigative journalists like myself. We all ‘lobby’. It is a page about (allegedly) well-funded Jews, who try to ‘influence’ politicians and foreign policy:

There is no corresponding page on a ‘Palestinian lobby in the United Kingdom. Yet if we look at the endless activity of groups like the Palestine Solidarity Campaign, Friends of Al Aqsa, the Palestine Return Centre and the Islamic Human Rights Commission, we can see exactly what they are doing as well. These groups all lobby:: 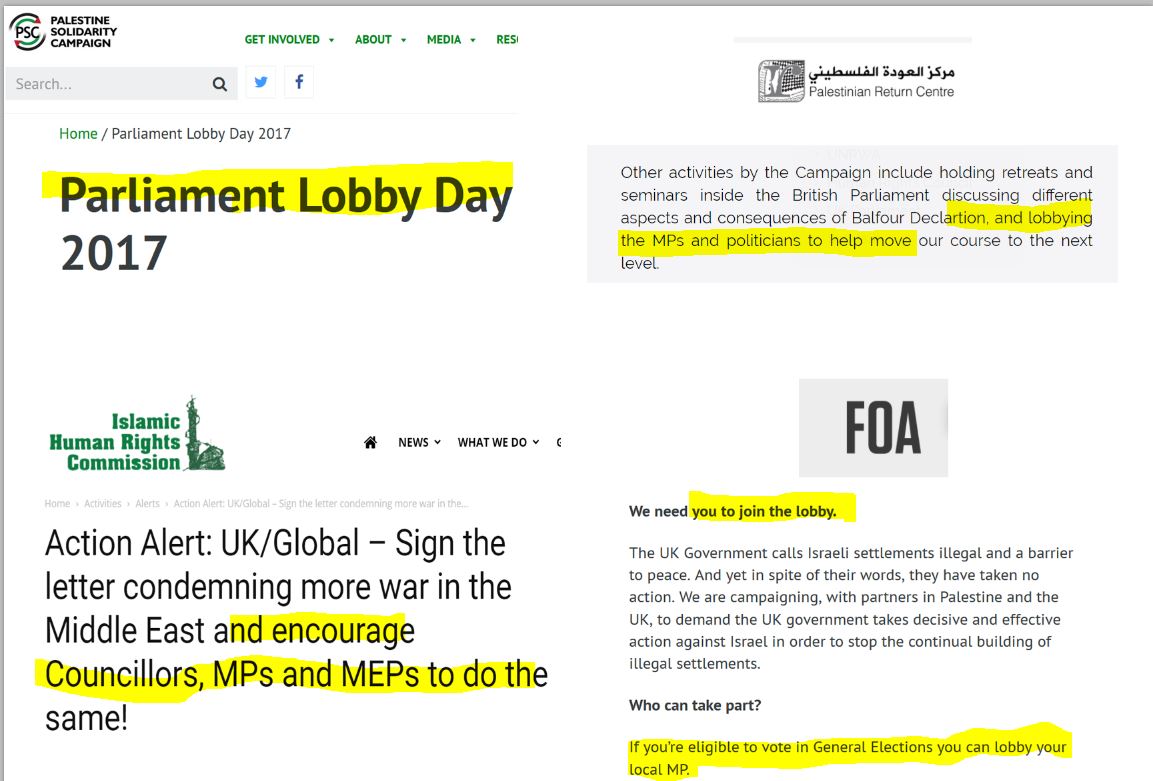 Wikipedia doesn’t ignore this completely. There is one important lobby group – The Council for Arab-British Understanding. CAABU are the most influential of the pro-Palestinian lobby groups and they have their own Wiki page. The word ‘lobby’ doesn’t appear on it anywhere. It is possible to see the obvious antisemitism on Wiki’s Israeli lobby page when we look at how Wikipedia editors describe Caabu’s work: 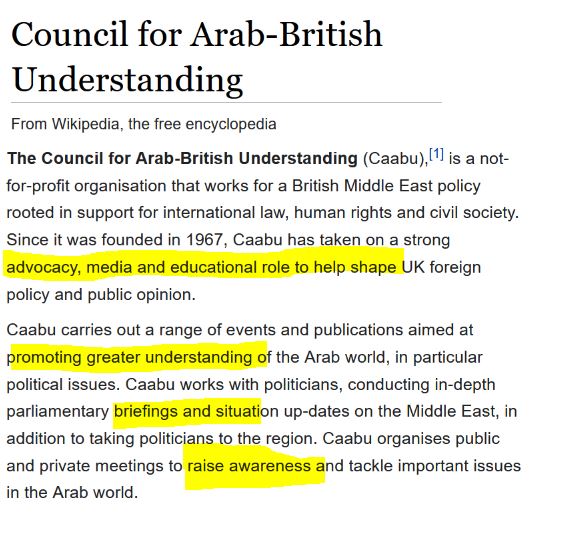 In the pages on Jewish groups, there is a clear conspiratorial tone. They are all about ‘influencing’, ‘lobbying’ and ‘billionaire funding’. The Caabu page is all about ‘raising awareness’, ‘educating’ and ‘promoting a greater understanding’.

This is clear evidence of Wikipedia’s antisemitism problem.

It is not enough that we ignore Wikipedia, we should be actively fighting against it. Two massive and interconnected projects are in front of me – Wikipedia and Academia. Staying idle is not an option. Please help to support the research if you can.