My report on hard-core antisemitism inside the Scottish Palestine Solidarity Campaign (SPSC) has just been released. It was commissioned and published by Jewish Human Rights Watch. One-hundred and sixty pages of rabid anti-Jewish hatred. Stripping away all of the pretence about sympathy for Palestinians, the report exposes frightening levels of raw and truly sickening antisemitism. A hatred that is openly prowling the streets of Scotland. Only two weeks ago, I was in Aberdeen myself and witnessed an activist, who shares posts about Holocaust denial, trying to persuade people to boycott a Jewish business.

For as long as these antisemites wrap themselves up in the Palestinian flag, too many people are willing to turn a blind eye. Only against Jews is this type of racism openly tolerated. It is flourishing in schools, colleges, universities, unions and in city councils. In fact, so rampant is the disease now, in some settings you can be ostracised if you do not partake in the frenzy yourself. Bashing Jews has becomes a trendy position for the ignorant social justice warrior. ‘Palestinianism’ is a viral ‘ponzi scheme’ and as it spreads, it carries antisemitism in the undergrowth.

It is never easy returning to the real world after embedding myself inside the minds of those that hate Jews. Such research darkens the soul. As worthy and as necessary as I know the journey to be, I cannot help but be tainted by it. It isn’t just about peering into the mind of Nazis. To make it work, you need to engage with them, mix with them, laugh with them.

This is me in Aberdeen recently. I went up to ‘engage’ when the SPSC came to promote the boycott of a Jewish owned business, Jericho Cosmetics.

In the image on the left, I am talking to Gavin Turpie. Here are some of his Facebook posts: 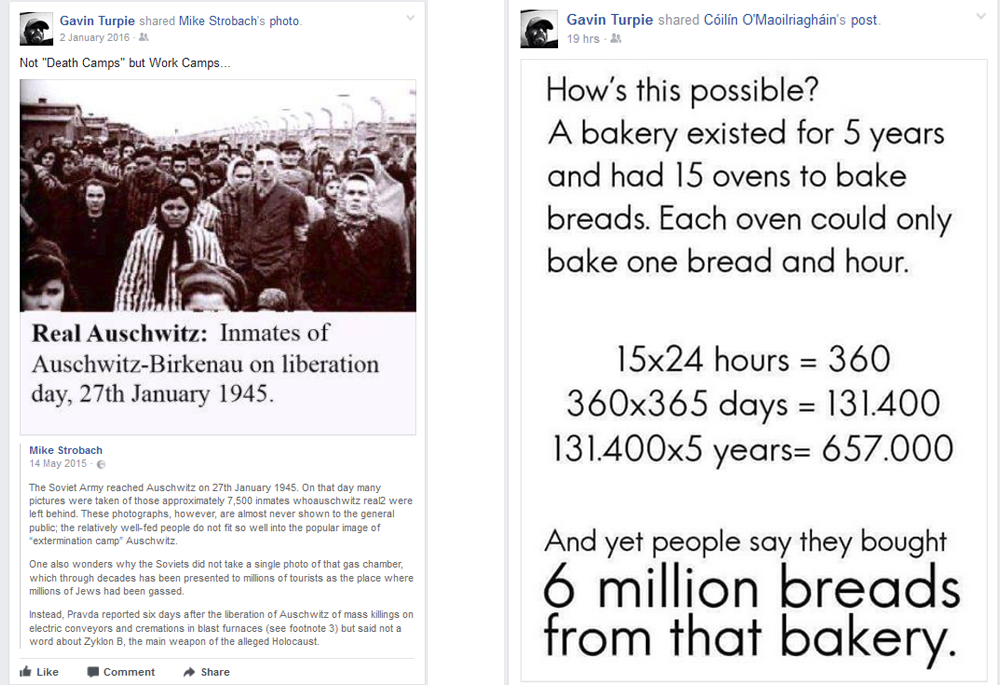 You can read more about Gavin in the Aberdeen section in the full report. In the centre image, where I hold the Palestinian flag, I am standing next to George Blair. These are some of his Facebook posts: 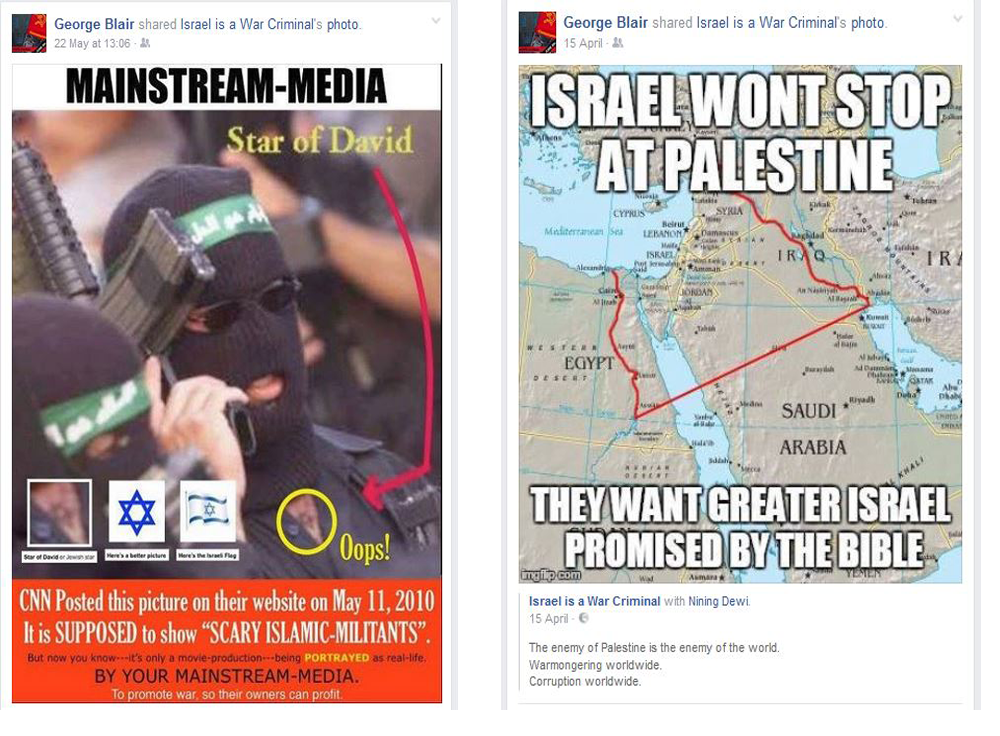 The woman in the green jacket is Fiona Napier, head of Aberdeen SPSC. It is her septic SPSC branch that places antisemites onto the streets of Aberdeen. As she stands alongside those who openly share antisemitic imagery, she doesn’t believe antisemitism exists in her group.

Endless hate inside the SPSC

The report uncovered endless hatred of Jews, in every city the SPSC operates in. At every SPSC stall, at every SPSC demonstration, at every event, antisemitism was significantly present. Not an antisemitism that can be explained away as a criticism of Israel, but hard core antisemitic tropes. 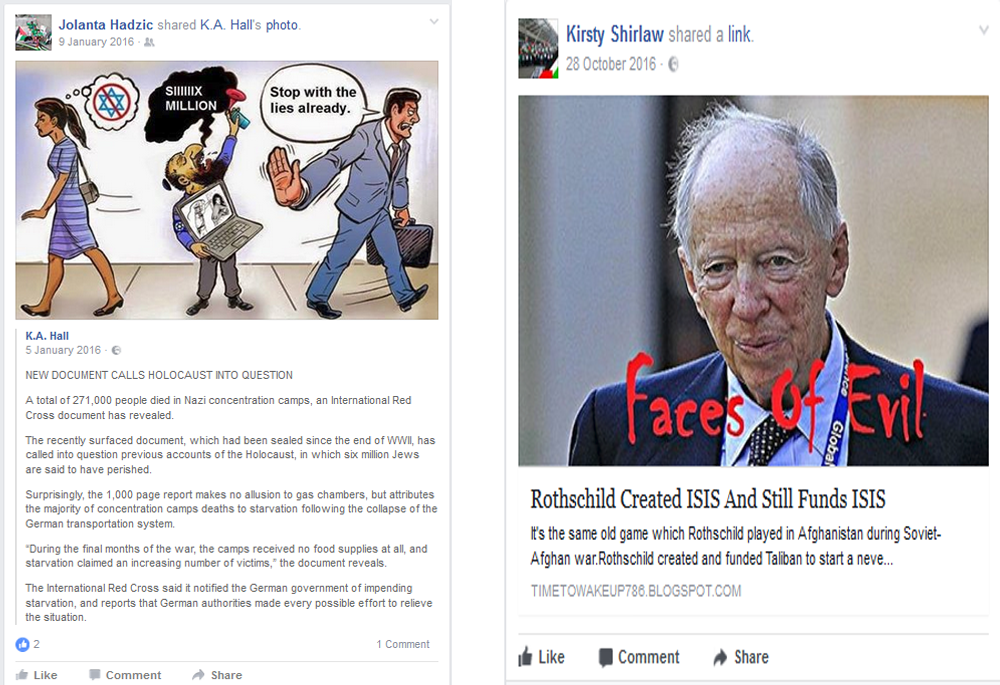 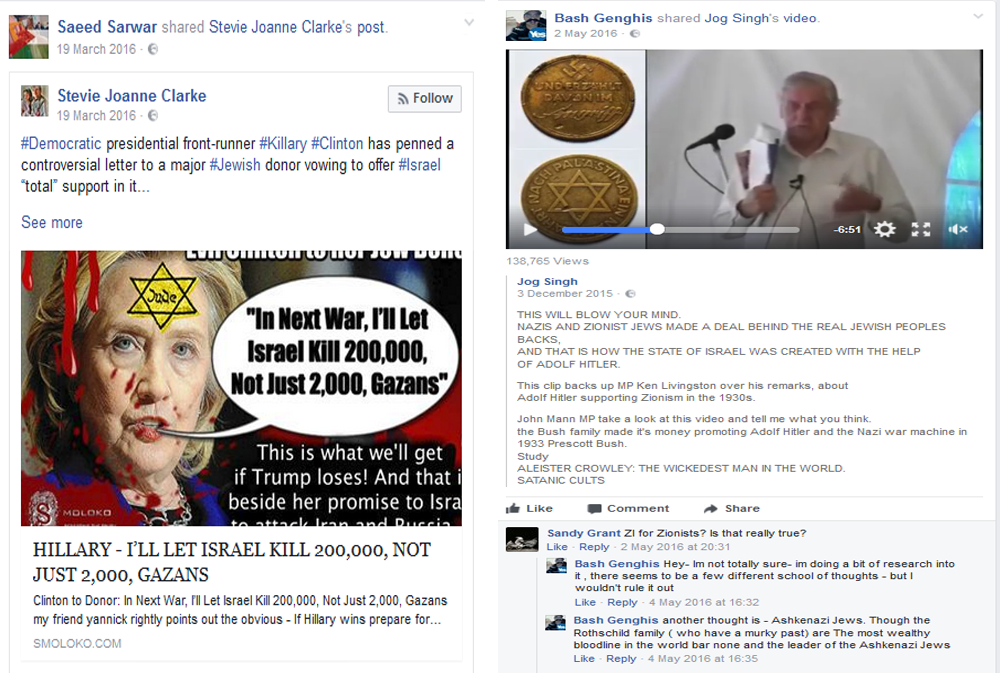 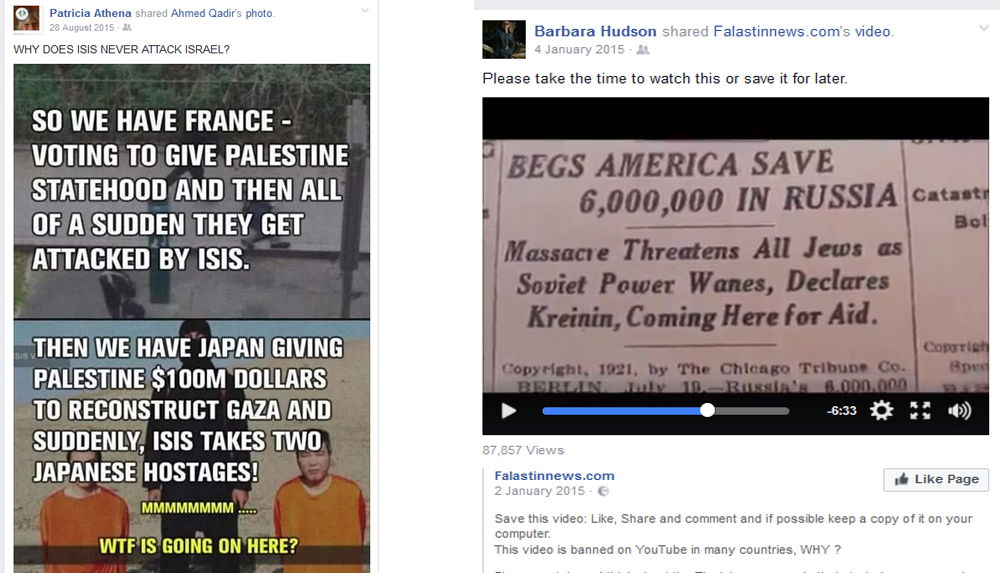 These are just samples and cannot do justice to the volume of SPSC activists who were found to have shared hard core antisemitic material. The comprehensive report captures them all. In Perth, Dunfermline, Fife, Inverness.  Everywhere the SPSC set up a stall, or demonstrated, people who shared hard core antisemitic posts were significantly represented. Over one-hundred and sixty pages, of Jews controlling the media, owning the banks, being behind ISIS, 9/11, 7/11 and plenty of Holocaust denial.

The report sought to quantify antisemitic tendency and sheds light on concentration levels of antisemitic ideology in anti-Israel activism. One of the case studies looked at the Jackie Walker event in Glasgow. Using a sample of thirty-two activists, the study found that 44% of those present had shared numerous hard core antisemitic posts. This level of Jew hate found at an event set up to deny the problem of antisemitism.

Whether deliberate or not, people like Jackie Walker are currently expending large amounts of energy providing antisemites with a defence. You cannot deny such significant representation and pretend it is only a ‘fringe’. These people are the core activists at the SPSC. But it is not just Jackie Walker giving cover to Jew hate. Here is Max Blumenthal with two of the activists picked up in the report:

In February I published a report on antisemitism in the England & Wales PSC. Following the publication I was hounded, threatened and stalked. Yet those few Jews who sit in the camp criticising Israel, did not read the report and acknowledge the hate. They attacked me instead. Jonathan Ofir wrote a piece in Mondoweiss attacking someone who had uncovered antisemitism. That article was then gleefully headlined by the Jewish led group ‘Free Speech in Israel’ (my response). There is nothing in any of these reports that has anything to do with Israel. It focuses on classic antisemitic tropes. Why on earth are Jewish people, even if they are a small minority, giving cover to people who share posts about Holocaust denial?  Is the ’cause’ so infected with Jew hate, that a level of 40-50% is tolerable because as activists, there is not enough power to start the engine if they actually clean the group of racism?

The results for the second case study are even more frightening. Last August, outside a peace festival set up to celebrate Israeli diversity and culture, the SPSC gathered to protest.  About one-hundred and twenty demonstrators. Over sixty activists were identified. More than 50% of them had shared numerous hard core antisemitic posts. 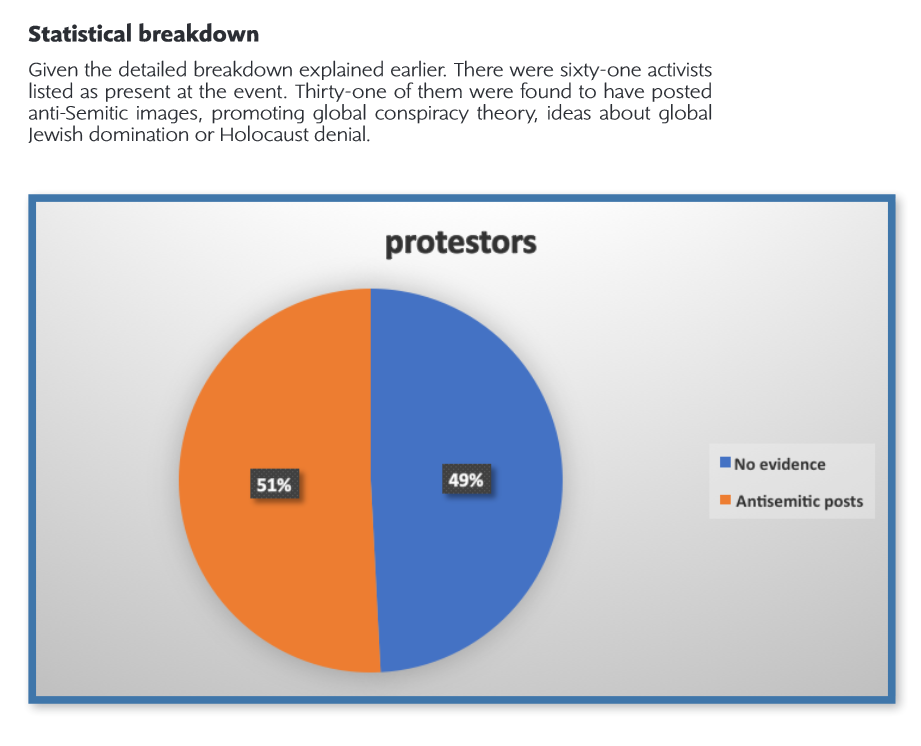 In the small crowd, there were at least ten who spread material denying the Holocaust.

The findings of the report were almost self-evident.

Following on from this:

*Much of this activity seeks to spread antisemitic thought*

Because of the success of the International Shalom Festival at the Edinburgh Fringe last year, it has expanded this year to cover three days. Once more the SPSC have called a protest. Only now we know what drives the protest. We know what will turn up. A group of thugs, many of whom share horrific antisemitic images. Last year, ten people in the SPSC protest were found to share Holocaust denial material. Ten!

This is a test for Scotland. Are antisemitic thugs really going to be allowed to protest the festival in Edinburgh? People should buy tickets to the event, to go and enjoy the festival. Just as people should seek out the Jericho stall in the Union Square shopping centre in Aberdeen to buy products. If the police won’t stop the anti Jewish intimidation, we can provide our support and anti-racist groups should be out in force to oppose the Jew hate.

And if you walk past any of these protestors, wrapping their Jew hate up in a warm Palestinian flag, remember exactly what you read in the report. These people are conflating their racism with sympathy for Palestinians.

The Sunday Times ran an article on the report. The official SPSC response, came from Sofiah MacLeod, chairwoman of the Scottish Palestine Solidarity Campaign. She said it is “not inclined to take seriously the so-called research”. ‘Not inclined’ to take it seriously that 40-50% of the SPSC activists share antisemitic material. We need to make them take it seriously. It isn’t the 1930’s. Is it?

I fight antisemitism. My research is intensive and I am currently working on both short and long-term projects. The generous donations I receive from the community allow me to carry on with this work.

Please if you can, consider making a donation to help with the fight. I believe that attacking the lies and distortion is vital. We need to be there to expose it. Even producing just one of these piece does take days, sometimes weeks (or months!), and whilst I do what I can, there are serious constraints that impact on what is possible. Your assistance can and does make a difference. Every contribution is greatly appreciated.