From London to Dumbarton, we have to stop the spread of antisemitism.

The Barbara Stanwyck smoking advert is probably from the late 1940’s or early 50’s. When I was growing up in the 1970’s, despite a growing understanding of the dangers, you would still see images of the connection between status and smoking. It was still seen as ‘cool’. Non-smokers who avoided the intense peer pressure, could still be ridiculed. Have you seen a cigarette advert recently? One on a sports car? Watching a movie? No, thought not.

Why am I talking about cigarettes?  Let me look at antisemitism in the UK in the summer of 2017.

As those who follow my blog know, just a few weeks ago I was walking with Islamic radicals who were waving Hezbollah flags as they marched through London. Last weekend, my family was thrown out of an event in a large public building just a few hundred meters from the Houses of Parliament. On the same day in Glasgow, a group gathered to protest against Radiohead’s upcoming gig in Israel. In a group of about 20 people, at least four spread material on Holocaust denial. You simply cannot have a demonstration against Israel today without significant hard-core antisemitism being present.

A party comes to Dumbarton

On July 29th – July 30th, Dumbarton are throwing a ‘Palestinian Weekend Festival’. No doubt ‘anti-Israel activists’ will tell you anti-Zionism isn’t antisemitism and that this is just a collection of people who sympathise with Palestinians. 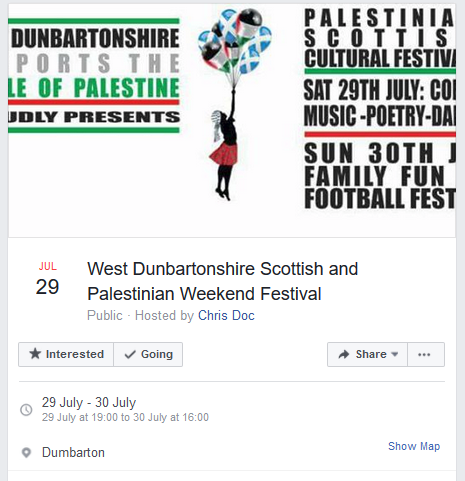 ‘West Dunbartonshire Supports the People of Palestine’ is the group behind the event. The people in this group have been accused of antisemitism before: 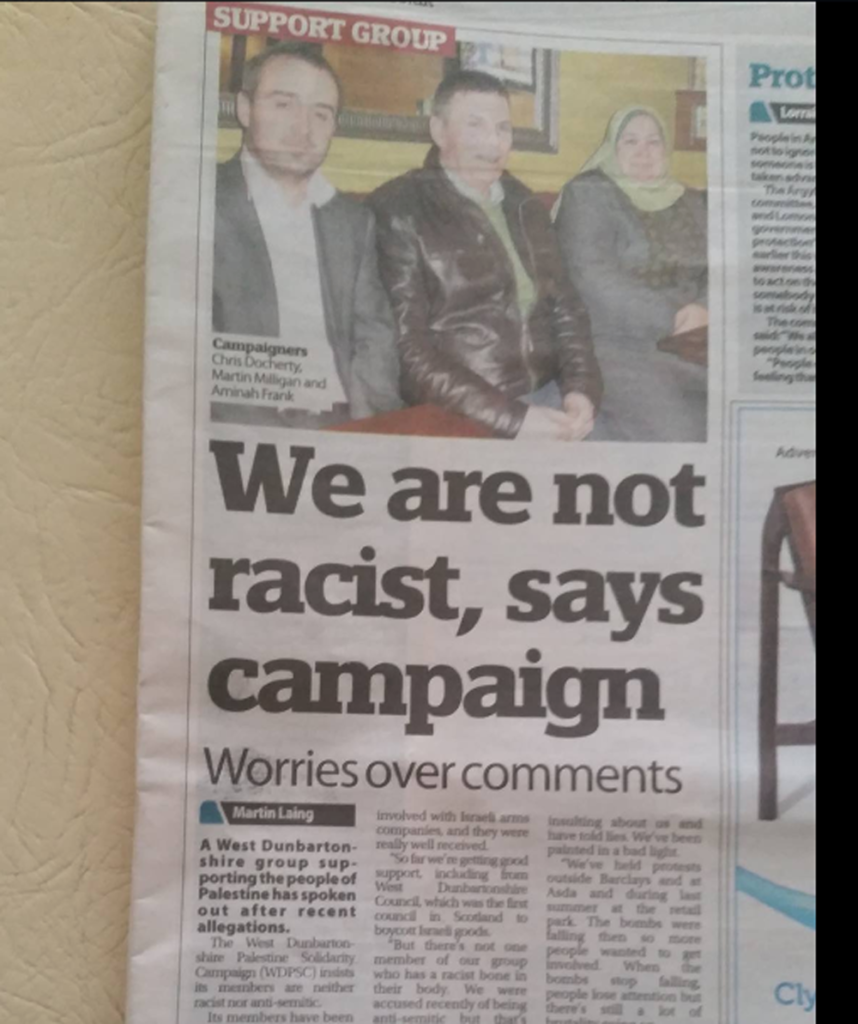 “We are not racist” screams the headline. Three people are in that image: Chris Docherty (the ‘Chris Doc’ hosting the FB event), Martin Milligan, and Aminah Frank.  They are part of the central force of Dumbarton anti-Israel activity. As is openly admitted in the article, the group is small. Scarily, according to the article, this group receives ‘good support’ from the local council. Just like the Holocaust denying BDS troop, these activists are soldiers of the Scottish Palestine Solidarity Campaign (SPSC).

They are clearly proud of the event: 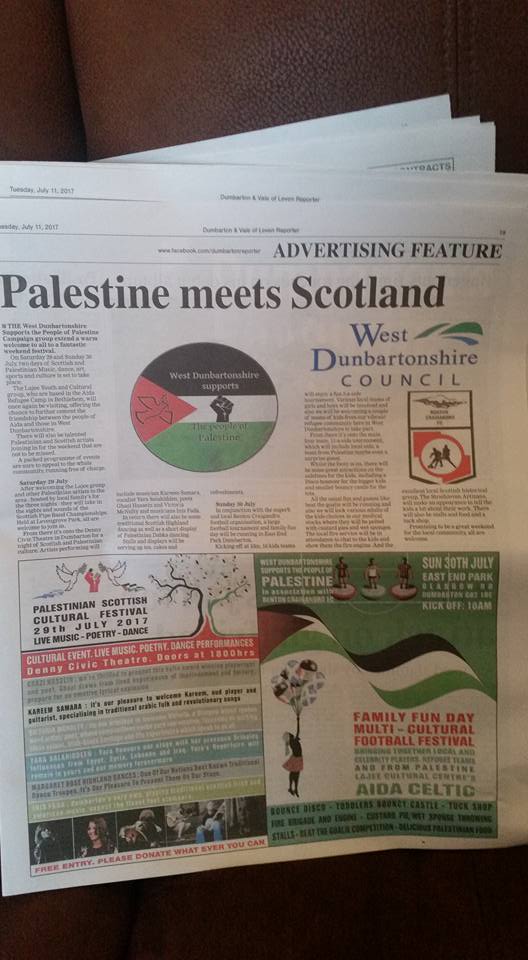 We can see this group has council support. So let us meet them:

Dumbarton activism on the streets

This is Martin Milligan, with Aminah Frank on the streets of Dumbarton. This time outside Asda:

These are both brutal antisemitic sites. On top of Jew hate, these people are also sharing rabid hard core Nazi messages.  This the link (NSFW) for the article on the left. Smoloko (image right) is a Holocaust denying website. 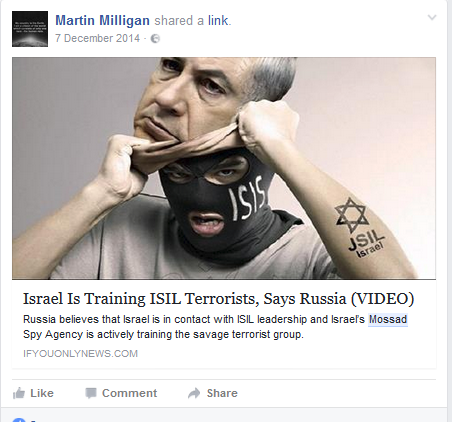 Then there is Margaret Frank:

‘Veterans Today’  is another nest of antisemitic thought. Here is an article from the site dealing with the ‘Holohoax’ (NSFW). As is typical of these ‘humanitarians’, they frequently post hard -right messages. Here is another article shared by Frank. This time a David Icke post. Icke endorses the classic antisemitic forgery ‘Protocols’, and promotes Holocaust denial. 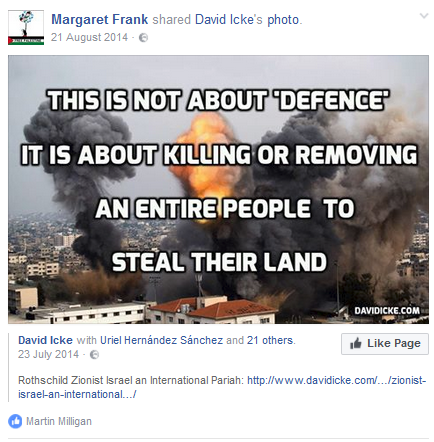 ‘Liked’ by Martin Milligan of course. Frank also supports the idea America is controlled by a ‘subversive’ foreign entity. 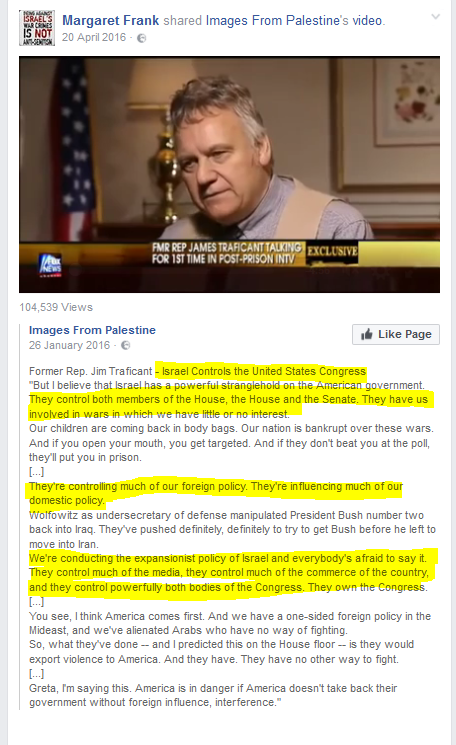 This is ‘Chris Doc’, outside Barclay’s Dumbarton. The image was posted by SPSC ‘royalty’ Karen Bett. The king of ‘SPSC’, Mick Napier, Karen and Chris, all enjoy banter in the messages: 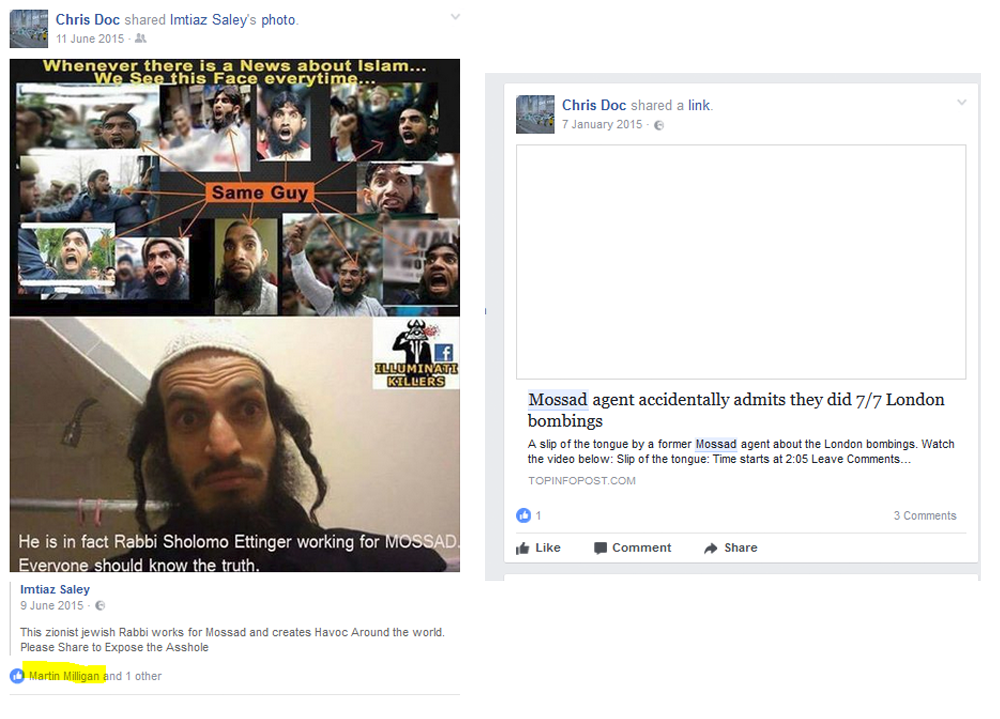 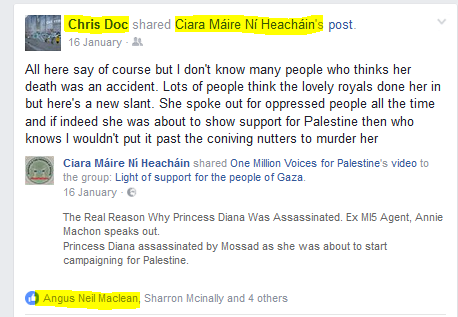 And back to the ‘illuminati’. Hashtag, ‘noZionism’, ‘Mossad’, ‘Rothschild’. 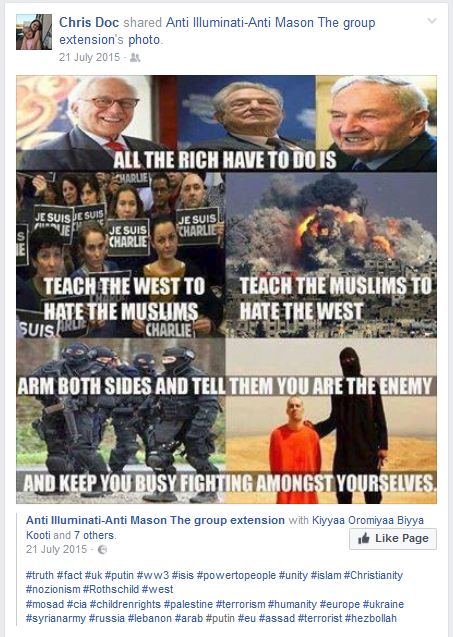 That means all three people mentioned in the article that denied ‘racism’, all share multiple antisemitic posts. I wonder if Martin Laing, who was editor of the Lennox Herald, even bothered to do a cursory investigation.

Here is more action from the streets of Dumbarton.  Chris and Martin are present. We are now introduced to Caroline Wardle. 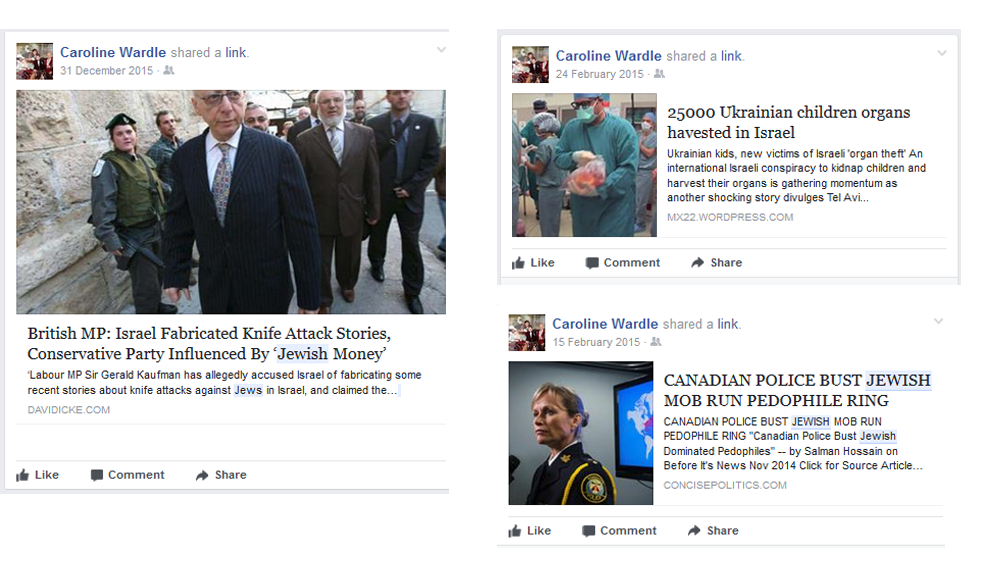 Icke.com. A fixation with ‘Jews’. 25,000 Ukrainian children kidnapped for organ harvesting. No surprises. The Rothschild conspiracy of course: 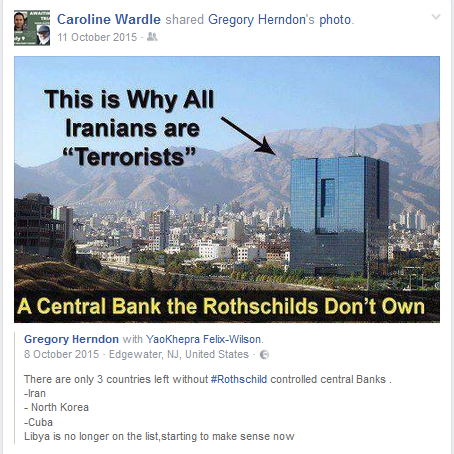 This is the mindset necessary to stand on a street stall in Dumbarton in December and persuade people to boycott the Jewish State. These people have invited everyone to their festival. Another photo:

Outside Barclays again. How is it that people who adhere to a rabid antisemitic mindset are allowed to stand on UK streets and promote a boycott of the Jewish state? We are now introduced to two more Dumbarton activists, Stephen Mcg and Louise Robertson.

The image on the left suggest the US and UK are at war with Syria because of Rothschild / Zionism / Israel .  The article on the right (NSFW), from the ‘Veteranstoday’ website suggests Israel has launched a nuclear strike on Yemen.

“We expect Mossad and ADL trolls to be driven crazy by this one. No one watching this video can have a second’s doubt that they are seeing an Israeli neutron bomb. Israel is the only nation that openly deploys neutron bombs, there is no one else.” 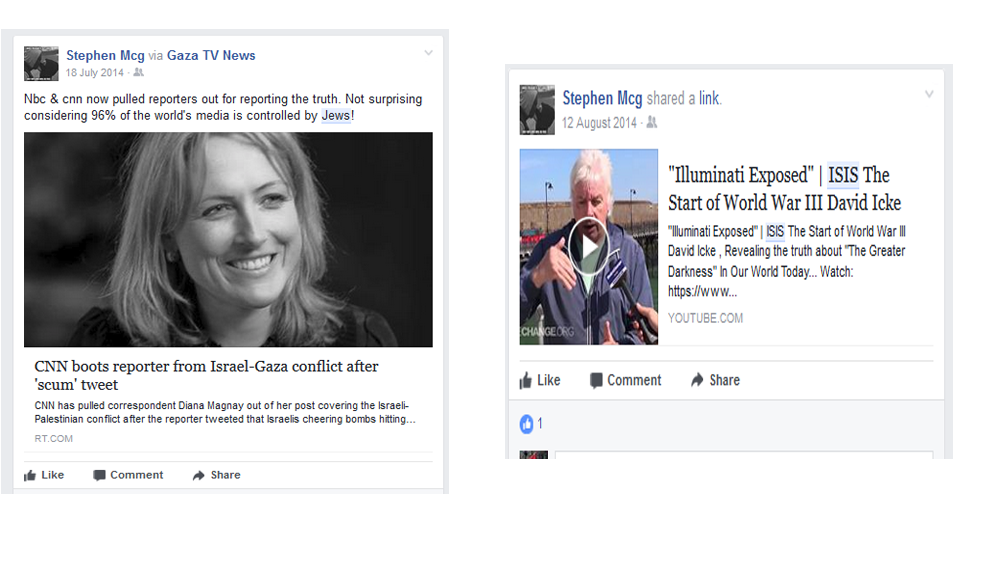 This Jews (not Zionists this time) control the world’s media. And another posts by David Icke, a clear favourite in SPSC ciricles. Stephen also shared this video: 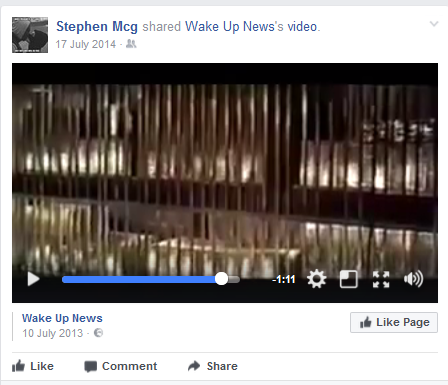 Which suggests the Germans had won the First World War by 1916. The ‘Zionist Jews’ saved the UK in exchange for Palestine. The British stole Palestine by drugging the Turkish troops & the UN is a tool that pirate banker Zionists used to control the world.

As evidence that ‘like attracts like’, Milligan went to the Palestine expo. This is what the Government allowed to assemble in the QEII building. 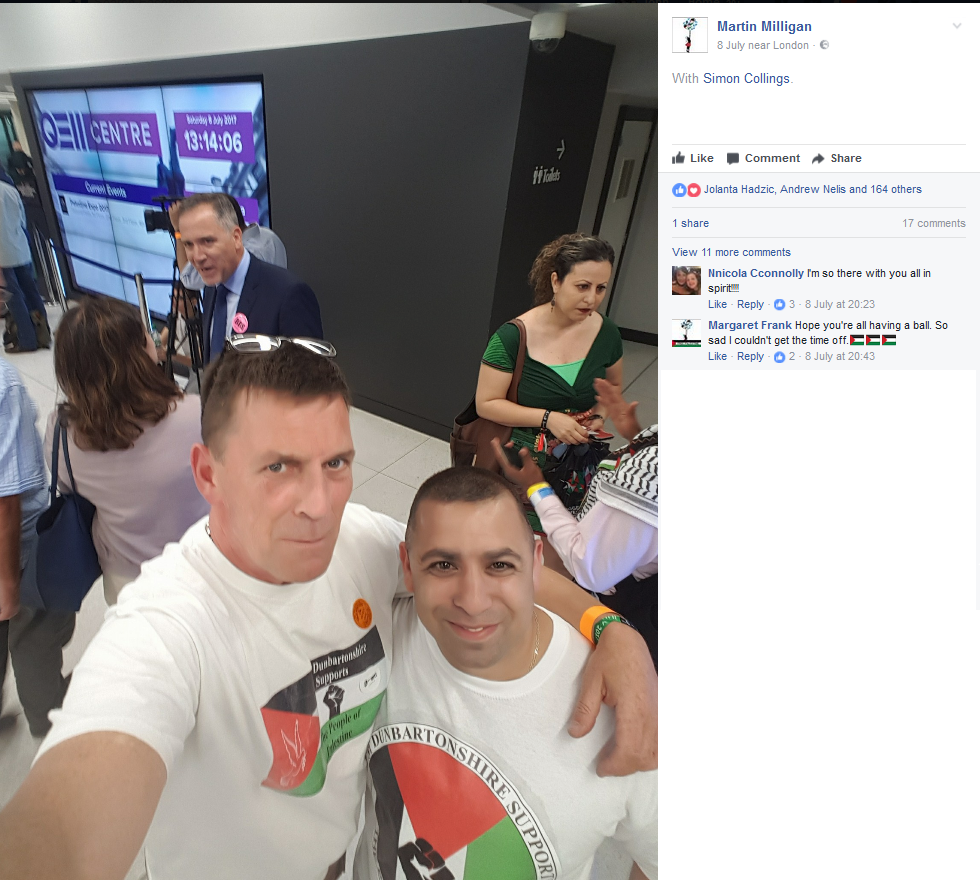 Both wearing the ‘t-shirt’ of the group behind the Dumbarton festival.  As further evidence of the small ‘incestuous’ world this group lives in, the two visible likes on the post, Jolanta Hadzic and Andrew Nelis are both known anti-Israel activists. Hadzic was one of those at the Radiohead BDS demonstration. Here is an image of her hugging Jackie Walker at a Glasgow event to deny the existence of antisemitism, alongside another post she shared suggesting that only 271,000 people died in concentration camps,. 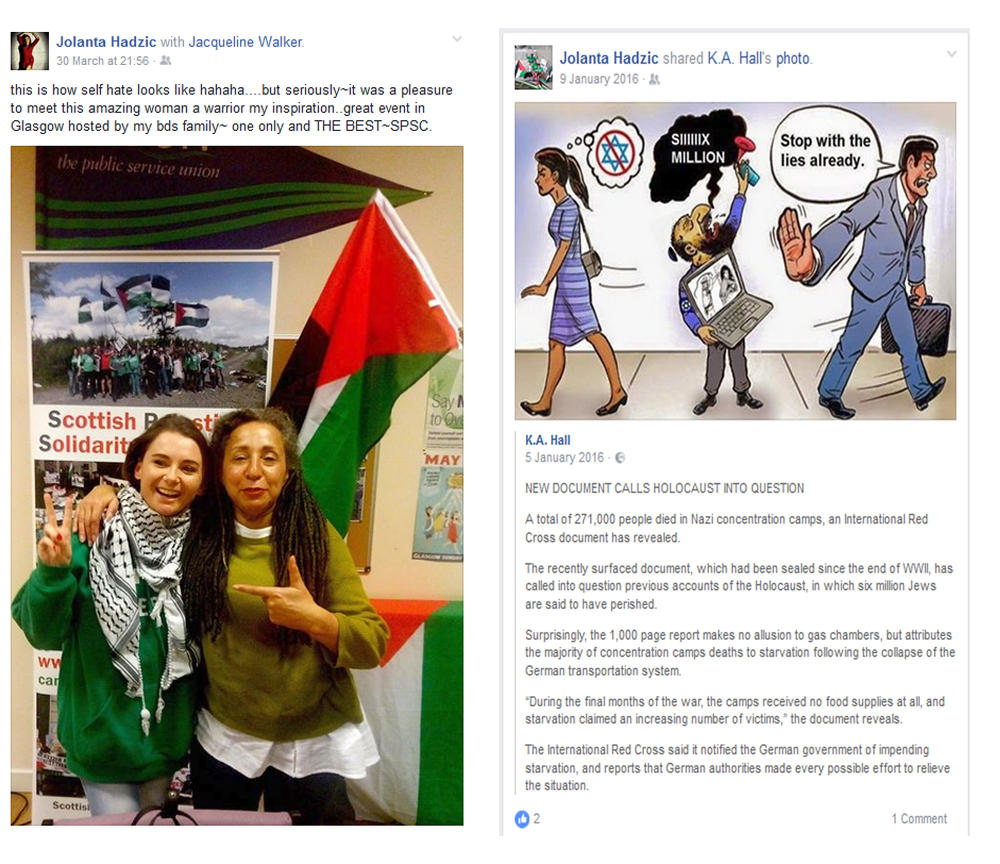 Nelis was one of those who reported my presence at the Palestine Expo to have me evicted.

The other person tagged in the image is fellow Dumbarton activist Simon Collings. A fellow ‘host’ of the Dumbarton festival. Here is Collings on the streets of Dumbarton last month. 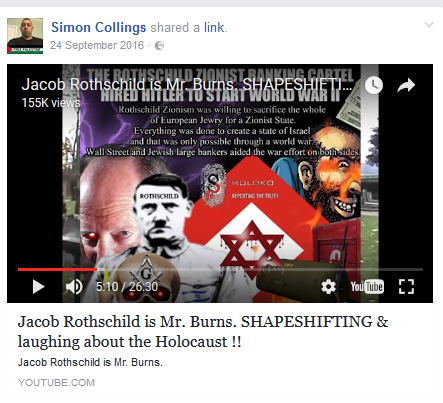 This is the link to the video (NSFW) . At one point during the antisemitic production, it suggests the bad Jews hired Hitler to kill the good Jews. ‘Smoloko – NSFW‘ (see image), is a Holocaust denying website. The next image perfectly encapsulates how ‘Zionism’ has replaced the ‘Jew’ of classic antisemitism: 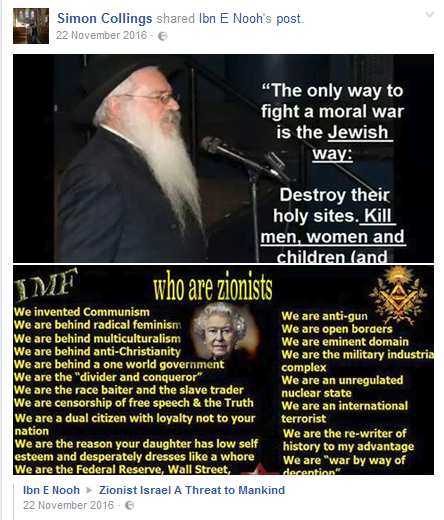 These are not ‘fourth kinders’

This is not the same as groups of people who think they have had a ‘fourth kind‘ experience and have been taken aboard an alien ship. This is not a funny distortion of truth. These people seem to believe that the vast majority of British Jews are some type of dangerous, subversive group. These people throw regular events to bring others into the fold, to convert them. They conflate a clear issue they have with Jews, with sympathy for the Palestinians. These are the people behind the festival in Dumbarton.

They deny it of course. The use the anti-Zionism is not the same as antisemitism defence. You only need to look at the images they share to know this is nonsense. Which brings me back to the opening image of the cigarette advert. Smoking doesn’t equal lung cancer, and not every smoker dies from a smoke related disease. But if you go and look for cigarettes in the local shop you will not see any on display. Eventually people woke up and understood the dangers. Every image of anti-Israel activism on the streets of the UK contains images of people who hate Jews and deny the Holocaust.  When will people understand?

Just who are the council members supporting this group?

It is time we realised there is a disease moving swiftly through the British undergrowth. It is using sympathy for the Palestinians as a means of spreading across the countryside. It poses a threat to every single Jew on these islands. It poses a threat to the fabric of British Society. We have to stop it.

Please if you can, consider making a donation to hep with the fight. I believe that attacking the lies and distortion is important. We need to be there to expose it. Mine is an independent action and research is expensive and time consuming. Even producing just one of these piece does take days, sometimes weeks, and whilst I do what I can, there are serious constraints that impact on what is possible. Your assistance can and does make a difference. Every contribution is greatly appreciated.