This exclusive account demonstrates that SOAS has been the venue for a hate-infested political group set up explicitly to attack mainstream British Jewry. The official minutes from this group’s meetings demonstrate-

There is no justification for SOAS continually being permitted to get away with so much flagrant antisemitic activity. It isn’t just about the poor Jewish students who study there – SOAS is incubating groups that align with Hezbollah, Iran, Islamist movements – and that are created with the purpose of helping to tear the world of British Jewry apart. And if you complain – they will shield antisemitic political activity as being under the umbrella of ‘academic freedom’. How toxic is that!

This twisted little movement calls itself ‘Jewish Network for Palestine’ (JNP). When it was formed in 2018, it launched itself as the UK branch of the US based ‘Jewish Voice for Peace’. It was conveniently founded just in time to add itself to the ‘Jewish’ anti-IHRA letter published in the Independent newspaper. The group was the brainchild of Haim Bresheeth – an academic at SOAS and an active member of the rancid Facebook Group Palestine Live. Bresheeth doesn’t mince words and openly states he believes the antisemitism crisis in Labour is fake:

I have heard Bresheeth talk myself several times. At an event with Illan Pappe in 2016, I heard him say this:

Is that ‘the voice of peace? There is little that is ‘academic’ in the hate and distortion he spreads. Haim has links to the pro -Iranian Islamic Human Rights Commission and he spoke at their annual pro-Hezbollah rally in London: 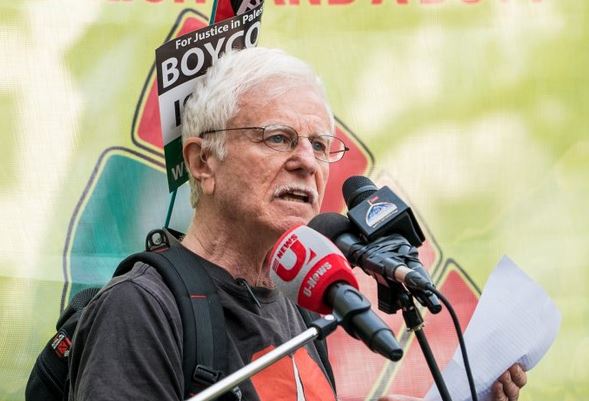 The last time Bresheeth founded an anti-Zionist ‘Jewish’ group -he platformed Lenni Brenner at the inaugural event. Brenner and his Nazi – Zionist theory are behind the antisemitic bunkum Ken Livingstone felt compelled to air. The Bresheeth event took place in 2003 and Brenner was touring at the time to sell a new book, ’51 documents’ – all about Zionism and Nazis, which was promoted and sold at the event.

On his own webpage Bresheeth hosts scores of Latuff cartoons. Latuff is well-known for producing highly offensive antisemitic cartoons. He even entered and came second in Iran’s 2006 ‘Holocaust Cartoon Competition.’

The Chair of JNP is David Cannon. Cannon appears to be of the type we know well. Jewish heritage tucked away somewhere – probably in the father’s line – not an ounce of Jewish upbringing – but still a man wrapping himself in a Jewish identity because it suits his agenda. The Chair of JNP also appears to be an antisemitic conspiracy theorist:

Humans are free is a Holocaust denying, Nazi-apologetic, antisemitic, extreme-right, junksite. The second share is of far-right conspiracy theorist Luke Rudkowski. Once again we have evidence of anti-Zionist activists happily associating with ‘extreme-right’ antisemitic conspiracy.

JNP began to hold their meetings at SOAS. A sign of everything that is wrong with academia today – and more certainly with SOAS. What on earth has this got to do with academia? This group was set up to attack the Jewish community – and for no other reason – what should a British Jew make of a British university providing the safe space needed for them to plan their attack?

I obtained the official minutes for three of the JNP’s meetings.  You can see them here – September 2019, October 2019 and January 2020. What they reveal is jaw-dropping.

Here is the list of the steering group from the meeting held on 27th October 2019 at SOAS:

David Cannon was chair, Bresheeth is also listed but they are not the only stand-out characters in the group. Elleanne Green is also part of this inner circle. Green is not Jewish:

But she attends events suggesting that she is. 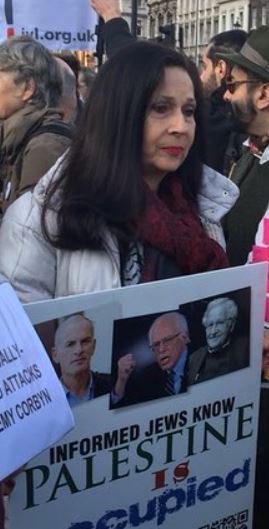 Green also signs every letter that she can as a ‘British Jew’. I have lost count of the number of times I have seen a letter, supposedly from British Jews – and found Elleanne Green’s name among the signatories. Despite everyone knowing that these open letters are extremely deceptive and misinform the reader –the Guardian endlessly publishes them.

There is no need to cite here further evidence that Elleanne Green has shared every antisemitic libel and conspiracy available online. The Palestine Live report laid it all out in stark detail. Green has associated with the most toxic antisemites, Holocaust deniers and extreme-right groups. She was recently exposed as attending events held by another ‘extreme-right’ group ‘Keep Talking‘.

Also in the steering group is Jonathan Coulter. Coulter is another non-Jewish long-term member of Palestine Live:

Coulter is one of those who swims happily with the antisemites. He is friends with the likes of Elleanne Green, Tony Gratrex, Tony Greenstein and Jackie Walker. He sometimes shares material from antisemitic websites himself – like this post from VNN that calls David Cameron an ‘agent’: 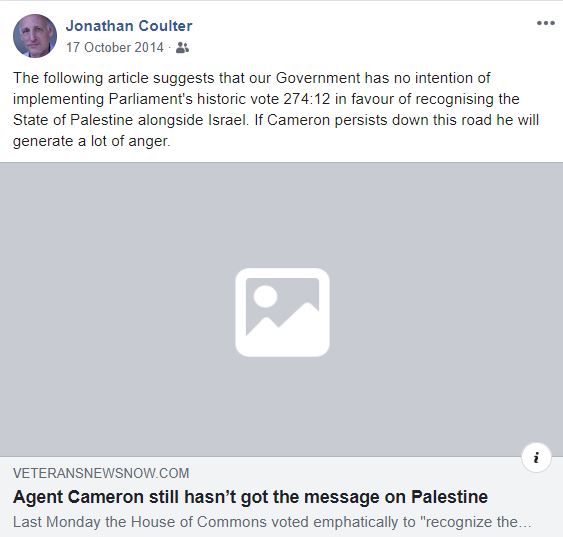 The website is now gone, but was part of the Veterans Today Network. An antisemitic fake news website. The author of the piece (via the internet archive) was Stuart Littlewood, a man who has been writing antisemitic conspiracy bunkum for a decade. Coulter also thinks the ‘Zionist lobby’ damages our democratic health and ‘can’t be touched’:

Les Levidow is another well-known name. He is an ‘academic’ who is a regular speaker at the annual pro-Hezbollah Al Quds demonstrations that take place in London. This image was taken by the Islamist group Inminds and he can clearly be seen next to the Hezbollah flag. 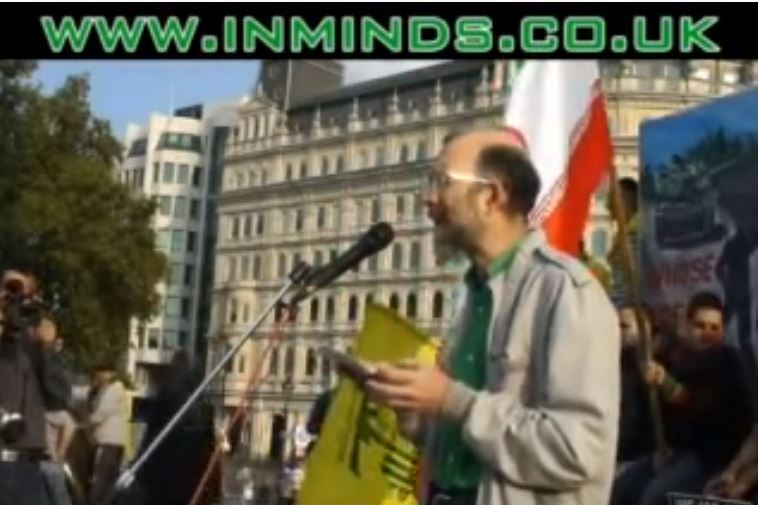 This linkage -between a handful of radical activists and Islamists is extremely concerning. It is no surprise that when the IHRC want a speaker or an article to belittle antisemitism they turn to people like Les Levidow for legitimisation. But more on the IHRC linkage shortly.

Even the more unrecognisable names seem no better. Linda Speight is another active contributor to Palestine Live. These people just grab at sources that confirm their distorted world view and their bias. Just recently she shared an article from the rabidly antisemitic ‘redressonline’ in support of Gilad Atzmon. Anyone who has read Atzmon knows the man is neck deep in hard-core antisemitic fascist – racist theory.

From the minutes – the IHRC

From the minutes of the meeting on Sunday 15th September 2019:

This is a real smoking gun. The Islamic Human Rights Commission – the radical Islamist group behind the pro-Hezbollah Al Quds demonstrations -ASKS fringe Jewish groups to write a letter to denounce the Board of Deputies. This provides real evidence of who is wagging the tail. When these fringe Jewish groups produce a joint letter – has it been directed from Iran?

These outliers – consisting of a handful of extremist Jews and ‘self definers’ – are acting as legitimisers and proxies for radical Islamist movements in the UK.

From the minutes – the Jewish group who have no Rabbis

It is in the minutes of the meetings that we find the really sinister. This is an ‘action’ from the meeting of the steering committee from the 27 October 2019. The group were asked by the supercessionist Christian group ‘Sabeel-Kairos’ to supply them with a Rabbi.

This shouldn’t be downplayed or written off as an amusing anecdote. A group claim to be led by a segment of British Jewry but has no contact with a single Rabbi. This is evidence that even they KNOW they are not connected to any part of the Community. In the end, the only option left is for them to contact an external fringe ultra-orthodox sect -Neturei Karta.

From the minutes – who is fronting their BDS activity

It was decided that Jonahid Miah will be leading the cultural boycott on behalf of JNP.

So who is this steering committee member of JNP who is leading their cultural boycott? Jonahid appears to be a Muslim: 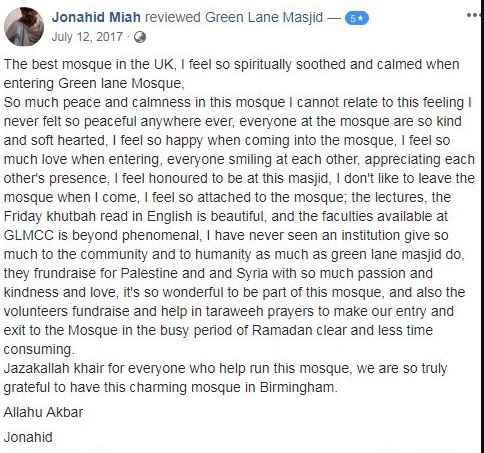 He is also a volunteer at Islamic Relief UK and Interpal. Like Green, Jonahid Miah also seems to add his name to these Jewish ‘open letters‘.

From the minutes – spreading the message

This is where it gets even more insidious. I have established the group is a tiny band of toxic extremists and antisemites, who even take instructions from the IHRC. But the aim of this group is to present itself as an authority on antisemitism and they have prepared ‘lectures’ which will create hostility towards Jewish people in the UK and destabilise the Jewish community.

There is evidence this is already underway. The meeting discussed Bresheeth’s attempts to arrange lectures:

At least one of these did take place – with Nira Yuval Davis speaking at SOAS in January. Through the event page on the SOAS website you would never know it had been organised via a toxic little group such as this.

From the minutes – on the street

The group had banners printed -to take to demonstrations. On the street people who see these will think that a large number of Jewish people align with the group. At events we can now see 4 or 5 different banners – all screaming the name of a ‘Jewish’ anti-Zionist organisation. Only those who are aware of what is taking place understand these are just the same dozen or two people wearing different hats.

This means that the first time these banners were seen on the street – they were held aloft by Elleanne Green  -founder of Palestine Live, Dave Cannon -who shares Rothschild Conspiracy -and Haim Bresheeth who speaks at pro-Hezbollah rallies.

This is Dave Cannon with the banner. The photo was taken by Elleanne Green. 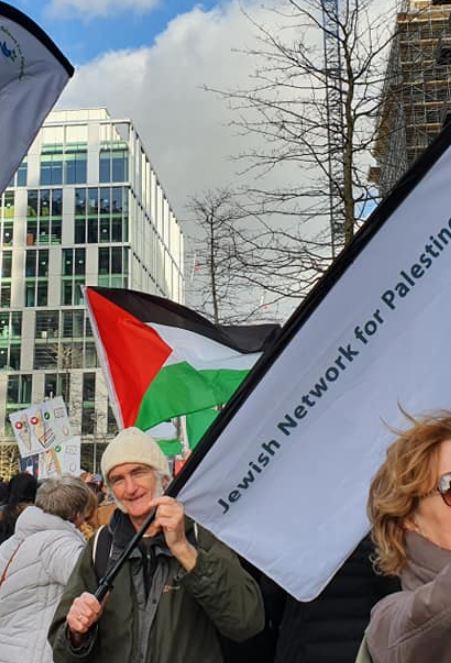 From the minutes – the PSC in the steering group

In the January meeting, ‘Jonahid and Huda’ discontinued their steering group membership:

Who is Huda? She is Huda Ammori, the key Campaign Officer for the antisemitic Palestine Soldarity Campaign. She used to be with ‘Manchester Palestine Action.’ Her mother was born in Iraq, the less said about her ‘Palestinian’ father the better. Why on earth was the PSC campaign officer on the strategic round table of a ‘Jewish’ group? -(rhetorical question). You can read more about Ammori on Harry’s Place.

The January meeting of the steering group indicates they had successfully brought events to another university – Queen Mary. 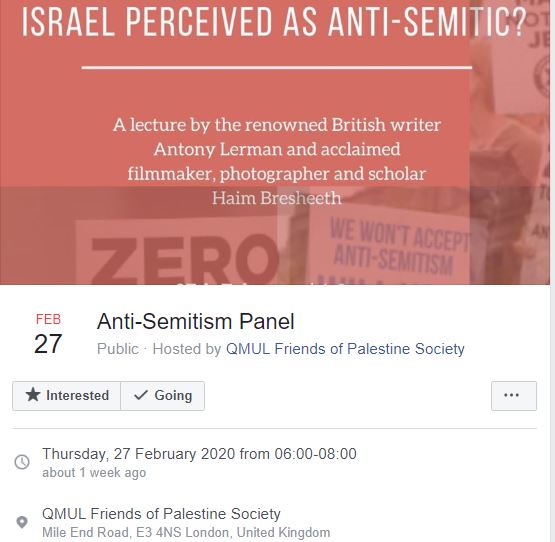 And this continues to be a key strategy of the group:

None of this would be acceptable even if it was organised in a private house. This is a movement linked to extremist groups, radical Islamist organisation and antisemites – pretending to be something it is not. The PSC, Interpal and the IHRC pretending to be Jewish. That this group gives itself an academic veneer and is hosted by SOAS – moves it into the categories of ‘insidious’, ‘dangerous’ and ‘sickening’.

The SOAS attack on Jews is relentless. On Friday there was an event at SOAS. On Saturday they held another. The JNP steering group was due to meet at SOAS on Sunday.

Academia at SOAS cannot help itself – and it will not be able to self-police or self-regulate. Given all this evidence, is it wrong to think that SOAS have declared war – not on Israel – but on the Jews. It really is time for the government to take firm action. This is antisemitism of the worst kind.

This blog is unique and the results speak for themselves. This research has been responsible for 100s of mainstream newspaper articles. I  engage in deep research, much of it undercover, into anti-Jewish hatred, anti-Zionism and anti-western extremism. Your support really does make all this possible. My work is fully independent and this independence is important for the freedom to go where I need to go. I was recently named as one of the J100 (‘top 100 people positively influencing Jewish life’) by The Algemeiner.  If you can, please consider making a donation towards the research.