SOAS are hosting a purveyor of Nazi and KKK antisemitic theory on March 7. The event is billed as a student workshop offering advocacy for ‘Palestine’, however this Hamas linked group -EUROPAL – has previously published a booklet pushing hard-core neo-Nazi antisemitism

SOAS is known as a hotbed of antisemitism. It has the dishonour of being a university in central London where Jewish students have said they are ‘scared to wear the star of David and speak Hebrew’. For years SOAS has been at the forefront of hostile campus activity. I have seen too many toxic events to list them all – terrorists are honoured there and platforms given to an endless stream of antisemitic speakers.

But surely – there has to be a line they won’t cross – even at SOAS? It seems not. In two weeks they are hosting an event by an organisation -EUROPAL – that has been caught before spreading antisemitism. To turn disrespect for Jews into absolute mockery – EUROPAL are on campus at SOAS to teach students about – yes, you guessed it – antisemitism.

The all-day event – due to be held on March 7 – is described as a ‘student workshop’ – teaching other students how to be better advocates for ‘Palestine’. It is co-hosted by the SOAS Palestine Society. The first two sessions to be presented are about method, delivery and BDS – which means they will be full of the usual lies and propaganda we are all used to. It remains heart-breaking that students are fed this type of ahistorical and demonising garbage in a place of learning – but nothing new for SOAS. The real problem arises in the third session – which is about ‘antisemitism’:

EUROPAL have been around since about 2014. It is run by Zaher Khalid Birawi. Birawi is frequently referenced in the ‘Terrorists in Suits‘ report recently released by the Israeli Ministry for Strategic Affairs. He is one of those figures with close links to Hamas, who connect the British ‘hard-left’ – with the terrorist group. This image was taken in Gaza and has the leader of Hamas standing next to Birawi – who has brought with him key figures from the Palestine Solidarity Campaign. 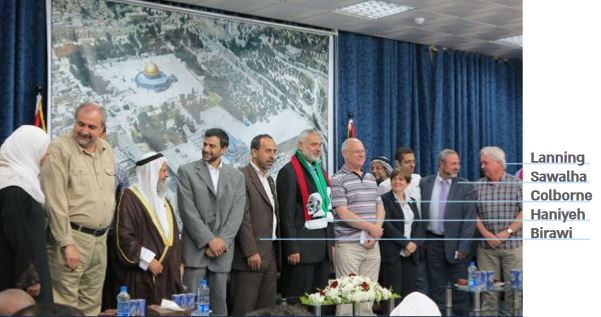 The Meir Amit Intelligence and Terrorism information centre call Birawi an ‘‘affiliate’ of both Hamas and the Muslim Brotherhood. ‘Terrorists in Suits’ label him a ‘known supporter of Hamas’. It is worth browsing those documents for a history of his activity.

Given these links, it is beyond belief that organisations such as these would be allowed to spread their hatred onto a British campus. This is a classic radicalisation technique. EUROPAL are given access to students – they slightly tone down their message – gain new recruits – and save their harsher words for their new recruits at events they hold elsewhere.

What is EUROPAL’s understanding of antisemitism? Putting aside the links to terror groups, we do not have to look far for evidence that these people spread Jew-hatred.

In March 2019, FOSIS held their annual Palestine Conference, co-hosted by Olive. It took place at Kings College. At this conference, a booklet was given out, titled ‘Basic Facts on the Palestine issue’. It was written by Dr Mohsen Mohammad Saleh.

The author is General Manager of the Islamic Strategic think tank ‘Al-Zaytouna‘. From his extensive writing, it is clear he also has solid links to Hamas leaders. The text itself is beyond offensive and glorifies and legitimises terrorism. The author approaches the conflict from an overpowering political Islamist perspective. There is nothing here about peace or equality at all. This is about Islamic rule, ownership and conquest seeking to ‘expunge’ Zionism completely from ‘all of Palestine’. The book ridicules Jewish claims to the land and when it deals with the origins of the Jewish people on page 7 – it pushes the Khazar Myth .

The pamphlet was published by EUROPAL, the Hamas linked group that SOAS considers an authority on Antisemitism:

You can download the pamphlet here. It is beyond belief that this type of material should be distributed at a London campus.

The Khazar Myth and the Nazi – Arab alliance

This myth suggests Jews do not come from Judea, but rather from a mass conversion of nomadic tribes around the Black Sea region in the 8th century. The Khazar myth spread where it was seen as a useful counter to Zionist arguments over British Palestine. It is obviously total bunkum. Even putting aside the silliness – and the inherent racism – of the argument itself, the majority of Jews in Israel are not even Ashkenazi.

In typical antisemitic fashion, the ‘Khazars’ have been demonised into a ‘warlike race’ who engaged in ‘phallic worship’. This type of rancid antisemitism can be seen today throughout hard-core Islamist anti-Israel propaganda. It is scary to think that the person who wrote the vile piece in the previously supplied link is credited with being the ‘Chairman of the Palestinian Encyclopaedia’.

How it spread into Islamism

Most Arab Anti-Zionist arguments originally were political arguments. They focused on the McMahon correspondence, Balfour or Arab rights to independence. The adoption of antisemitic ideologies such as the Khazar Myth into Islamist writing is a neo-Nazi influence and occurred later. The Nazi apologist Benjamin H Freedman has been credited as being the person who ‘sold this’ trope to the Arabs (US embassy letter in the British archives, FO371/522557).

Anyone who wishes to swim in a sewer of pure antisemitic hatred, can listen to Freedman’s 1961 speech at the Willard Hotel in Washington or read it here. When Islamists talk about the Khazars, it is Freedman that they reference. According to historians such as Albert and Cecil Hourani, Freedman convinced the Mufti’s cousin, Amin al Husseini of its merits. At the time everyone knew that Islamic anti-Zionism and the neo-Nazis were in bed together. A truth the current ‘PC’ crowd don’t want us to talk about. These days we let these people onto campus and then wonder why we have a growing problem with antisemitism.

When we sit quietly as extremist groups with ties to terrorist groups push the Khazar myth onto our campuses to spread their ideologies, we are allowing neo-Nazi thought to spread amongst students. From the adoption of this myth spreads the idea of Zionists being ‘Talmudic Jews’ – whilst anti-Zionists are the purer ‘Torah jews’. Clean Jews and dirty Jews. Much of the European Islamist antisemitism that we experience today is coming from people who have been radicalised by this stuff in *western* Universities.

This mix between neo-Nazi and anti-Zionist ideologies creates the sewer we have become far too accustomed to today. The CST recently published a report highlighting how the two seamlessly mix and mingle at events. In two weeks SOAS are hosting an event explicitly designed to teach students how to make life more hostile for British Jews. Who in their right mind thinks that EUROPAL are fit to talk to students at all, let alone given them instructions about antisemitism? Are we in the Twilight Zone?

We should take a stand. It would be possible to focus on the extremist Islamist influences and the support for terrorism. There seems to be little point as SOAS does not seem to care if radical extremist ideologies or support for terrorism is spread in its halls. SOAS does not care about truth, history, peace or equality. The only question now, is whether even SOAS would draw the line at the Nazis? I suggest we do not leave it up to them to decide, but rather take action ourselves. If we sit and wait for SOAS to take a stand against the rise of neo-Nazi ideology – our children will never forgive us.