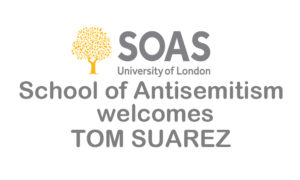 03 Nov 2016. I was inside one of the hot spots of radical Islam in London – SOAS. We came to hear Tom Suarez promote his book, ‘State of Terror’. I had not heard of Suarez, and he is a musician, not a historian. The book is published by Karl Sabbagh, who provided one of the speeches at the House of Lords event that saw the Zionists blamed for the holocaust. The only endorsements on the book were from Jenny Tonge and Ilan Pappe. My expectations were low.

My expectations should have been much lower. Suarez is an example of how someone can make a new career out of hating Israel without academic training or even a basic historical knowledge of the conflict. His methodology was clear, ‘I hate Zionists/Jews’, but to write a book, I need to make some citations, and he went off to find some.

Suarez doesn’t come with a backstory or a bio. There is no introduction. From the moment Suarez opened his mouth, until his pillar of sand had been swept aside by several people in the room, Tom Suarez built a narrative that was dripping with hard-core antisemitic undertones.

The basic script was difficult to believe. He has no grounding in history, nor does he seem to have academic research skills. He is clearly not well read, nor does he use diverse source material. What he does is plunder a single archive. Seeking out anything that can seem sinister. This quote, this thought, this demand, then becomes the driving force for the entire Zionist movement.

Suarez needs only a partial record of a conversation. He requires no hard logic. The method of creation is important to understand. Suarez enters a single archive seeking breadcrumbs.  It is a Goebbelsesque system of narrative creation that is supported by classic antisemitic tropes of scheming Jews, powerful Jews, bloodthirsty Jews and designed to propagate a myth of a satanic cult of ultimate power that brutally murdered a nation of farmers.

Suarez sidesteps entirely Arab violence. The only ‘terrorism’ of the 1920’s becomes legitimate Jewish land purchase. The only killers, Jewish. Another peculiarity was the insistence in referring only to Christian and Muslim Arabs in the British Mandate of the 1920’s as ‘The Palestinians’. Odd, racist and historically without any merit.

It is however a combination of factors that creates the truly sinister message. The insistence on cleansing the Arabs of violence pushes the outbreak of civil conflict into the late 1930’S. The belief in the global power of the Jewish Zionists.  The adherence to the image of the demonic bloodthirsty Jew.

When these three elements are merged, we are left with a rampant demonic force with global control and sinister intent, doing its will between 1937 and 1948. This as six million Jews died. His entire narrative depends on the existence of ‘Elders of Zion’ style control at the very same time as the world shut its doors to Jews and a genocide was committed against them. It is frightening in its sickening inter-dependency.

He gives Jews global control as they lay dying in Auschwitz. He suggest Zionist Jews ‘twisted’ Truman’s arm and Truman “always did as he was told”. There were brutally obscene comments, such as one discussing an atmosphere of diminishing global antisemitism in 1946 as Europe was knee deep in Jewish corpses. When it was put to Suarez that the Arabs co-operated with the Nazis, he suggested that the Zionists co-operated even more.

I lost count of the number of Nazi analogies. Everything the Zionists did was comparable to Nazi Germany.  Lenni Brenner and his Nazi-Zionist co-operation (‘51 document’) hoax seems to have been a heavy influence on Suarez in the creation of this fiction.

There was also much talk of indoctrinating and brainwashing children. There were discussions of Rabbis scouring post war Europe to kidnap Jewish refugees from non- Jewish families.  Effectively any transgression or ethically dubious action committed by any Jewish person over the last 100 years, is placed into a case file titled “evil Zionism”. He creates an image of a world desperate to receive hundreds of thousands of Jewish refugees, being frustrated at every turn, by a manipulative Zionist force that is determined their only destination should be Palestine.

Then question time arrived. There is an issue at these types of events and a clear disconnect between speaker and audience. Especially with the type of audience at SOAS.

The people watching the event, are invested in the modern fight against Israel’s existence. The base of their belief is the Naqba myth, the tale of a one-sided, pre-planned expulsion. Their history begins in 1948. People like Suarez provide pillars on which this narrative can stand, and for this the SOAS audience are thankful. Suarez helps to reinforce the vision of the Zionist monster in their heads.

Yet there is an absence of critical thinking. There is no attempt to challenge or address the tale Suarez has spun at SOAS. There are rarely many questions. He provided a service, he can go home now. Unless of course there are Zionists in the room.

What swiftly destroys the underlying pillars of the myth is the reality of Israel as the diverse nation. In the audience at SOAS there was a Muslim supporter of Israel. A black Israeli Jew. A Sephardic Israeli whose father was expelled from Egypt. The mere existence of these identities within the room destroys the opposition narrative. As they speak, there is no effective counter to their words. This type of challenge is far more effective than most and an element that should always be considered.

In the end, Suarez was easily handled. The Q&A session was taken over by supporters of Israel, but the lack of questions from the adoring crowd was the undoing of their own event. They had nothing to ask, so the vast majority of hands raised belonged to the tiny minority of Israeli supporters. One by one as they were picked, they took their opportunity to press the message home.

Antisemitism, the invention of an evil Zionist soul and global conspiracy theories involving Jewish power, should never be discussed. Not even inside the heart of the beast itself, SOAS.

Footage is being made available on this blog’s YouTube channel.