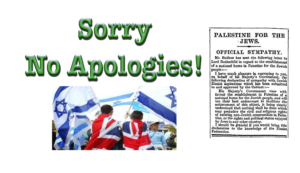 Suddenly everyone wants to talk about a letter written 99 years ago. As Israelis and Zionists worldwide begin the countdown to the 100-year anniversary celebration of the Balfour Declaration, several campaigns have been launched that seek to persuade the British Government to ‘apologise’.

The Balfour Declaration was a letter, written by the United Kingdom’s Foreign Secretary Arthur James Balfour to Walter Rothschild. It is recognised as having started the international process that would be undersigned through the San Remo conference, underpin the British Mandate of Palestine, the 1947 Partition and see the creation of the State of Israel in 1948.

One of the ‘apologise for Balfour’ campaigns was launched by the Palestine Return Centre in the House of Lords. It was to give a platform to vile comments and would lead to the suspension and resignation of Baroness Jenny Tonge.

Another of these campaigns, ‘the Balfour Project’ held an event at Southwark Cathedral last weekend. This itself part of a worrying trend of anti-Israel events recently held in Christian places of worship in the UK. Reports from that event suggest the campaign is “yet another vehicle for the vilification of Israel.”

Israel exists. The Jewish home was eventually created (albeit in a circular route), and is without much argument, the most liberal nation in the entire region. So just what should the UK Government apologise for?

There has been endless commentary on anti-Zionist outlets. I have analysed several of the pieces on the Balfour apology. They all centre around several key points.

Balfour and the settler colonial angle

Balfour was a letter of its time. Arguments used by anti-Zionists utilise different time periods to create an argument out of context. I see too many people struggling to respond to this. It is 2016. Israel was created in 1948. Balfour was written in 1917.  Six years after Balfour, two million people were transferred between Turkey and Greece. 30 years after Balfour, India was partitioned. Balfour can only be judged by the standards of 1917.

For anti-Zionists, this angle is important because it strengthens the idea of Israel as a colonial settler enterprise. Suggesting the British Empire took land from an indigenous people and gave it to European colonists. Yet this logic takes our eye off the ball (the Jews) by focusing on the player (Balfour). Jews were not the British.

Only if you look at Jews as being ‘European’ can you begin to ‘buy into’ this argument. And in doing so, inadvertently highlight the fundamental reason Jews needed a state of their own.

Anti-Zionists push the idea that white supremacist Jews rule over everyone else in Israel, Arab Jew and non-Jew alike. They frequently suggest all non-Europeans inside Israel are second class citizens. It is a central part of the BDS propaganda campaign.

Yet in Arabic lands, Jews were permitted to live, but considered ‘Dhimmi’. Protected, but second class nonetheless. Alien. There were often outbreaks of violence against Jews. In the 20th century there were brutal attacks against many of these communities.  The Farhud in Iraq in 1941 for example.

So, what did the Europeans think?

The Europeans considered Jews so alien that Jewish people were fleeing the brutal pogroms of Eastern Europe long before Balfour. Europe is littered with old ‘Jewish Quarters’ or ghettos, areas in a city where Europeans ‘permitted’ Jewish people to live. Balfour’s Europe was about to commit genocide against the Jews.

So nobody considered the Jews ‘native’. They were unwanted, segregated, and set apart everywhere they resided.  They chose to escape the lands of their persecution to recreate themselves in the land they had originated from. A clear movement of national liberation. A movement facilitated by the British.

Inside a world in which Jewish people in Europe underwent genocide because they were not considered European, the entire Colonial settler paradigm falls apart. We should thank anti-Zionists refusal to provide a home for Jews anywhere, even today (their refusal to accept Israel), for proving the moral imperative behind the Zionist argument.

The argument suggests Zionists inside the soon-to-be Mandate lands were but a tiny minority, and they sought to impose their will on the majority. Only through this imposition could the Zionists forge a state. Those like White use Zionist quotes out of context to make them seem more sinister.

White does this of course to create another myth. That Zionism is fundamentally non-democratic. He uses modern day issues such as the post 1967 disputes to drive home a false image of Israel’s anti-democratic nature. Yet tying Balfour in 1917 in a straight line to the partition of 1947 and therefore the creation of Israel is a gross rewrite of history.

It may work from the Israeli perspective: Balfour suggested, the League of Nations confirmed and Arab violence tried to stop. Therefore, Israel came to be despite opposition.

But it does not work the other way around. Had the Arabs not violently resisted Jewish immigration, there would have been no partition. Balfour did not propose partition, nor Israel. Balfour suggested ‘One state’ for all. What turned Balfour into the two-state scenario was Arab violence. That element is always missing from the anti-Israel narrative.

White’s articles have deteriorated. Time was, that despite reliance on a false narrative. Ben could be trusted to build a cohesive argument. Working well with the weak tools he had been given. Much more of his recent work has been directed to personal attacks, shoddy and sub-standard. The ‘unsavoury elements’ argument uses smear tactics and guilt by association as a way of demonising Israel. Israel is supported by extremists, fascists, illiberals. To discuss the ‘unsavoury elements’ accusation, a short exercise should suffice:

The suggestion is that Christian Zionist support for Israel is unsavoury. This as terror groups such as Hezbollah, Hamas and Islamic Jihad align with radical left wing groups such as the Communists or Momentum as the forces behind anti-Zionist movements. Look at some of the nation states that support and those that oppose Israel:

So which side is unsavoury? You can make your own mind up.

At both Balfour apology campaign launches, and in almost every single article written on the subject, one Jewish name is mentioned as often as Weizmann or Herzl, and that is Montagu. Edwin Samuel Montagu was the only Jewish member of the British cabinet at the time. Montagu, was opposed to the Balfour Declaration.

This is always used to suggest Christian anti-Semites wanted rid of their Jews and Balfour was the enabling method. That Zionism is a cult that does not represent Jews.  That Jews as a block opposed a handful of Zionist Jews and lost.

There is a certain irony in those that use Montagu as part of their argument. Hiding behind a Jewish person making accusations of antisemitism in the government are the very people who today belittle every accusation of antisemitism that Jewish people make.

So why did Montagu oppose Balfour? In his memorandum, often used for a headline, but rarely understood, Montagu details his opposition.

Montagu clearly displays limited vision. He talks of there being too many Jews to ‘fit in’ and a ‘tower of Babel’ full of people unable to communicate. Last time I looked, there were over 8 million citizens in Israel (just a fraction of the land in Montagu’s calculation) and most people seemed to be speaking Hebrew.

But the underlying sentiment here in his talk of nationalism and the newly found liberties of Russian Jews was an attitude that grossly misread world trends and the implications of what was occurring. We  understand also that 2000 years of diaspora life had made Jews wary of the ‘dual loyalty’ accusation that was the early warning sign of oncoming persecution.  Montagu wasn’t alone in reading the world wrong, but he was wrong. His was a monumental error. You don’t hold up the ‘blind man’ and use his vision to argue against those that could see.

We can categorically say that anti-Zionists prior to the holocaust were all wrong. We have historical support for this argument. We can say the same of anti-Zionist Jews who lived in Eastern Europe in the 1920’s. What of their anti-Zionism? Within 10 years many of them would be fleeing the rising vice like grip of Nazi Europe. Those that failed to run, burnt in the fires of antisemitic hatred.

There was an absolute, desperate need for a Jewish state by 1933. Are these historical anti-Zionists being used to  suggest there wasn’t? Using pre-Holocaust anti-Zionism to raise an argument against Israel is absurd.

It isn’t often that I agree with Ben White, but I will accept his article in one tiny part. The British do need to “reflect on a painful legacy”. Balfour was written in 1917. By 1922 the Mandate was in place.  If the British had swiftly finished the job they had been given international license to carry out, just how many Jewish lives could have been saved? Heartbreaking. Closing the doors to Jews running from the holocaust. That indeed does need some British reflection.

15 thoughts on “Apologise for the Balfour Declaration? You are having a laugh”