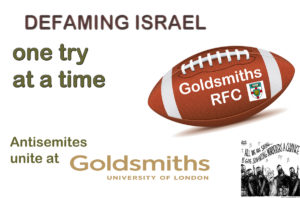 It was a few days ago whilst conducting a regular sweep of recent campus activity, that I noticed Goldsmiths RFC (Rugby club), have become deployed as a political weapon of the anti-Israel movement. As announced by the Palestinian Society:

“We’ve teamed up with Goldsmiths RFC to put our logo and the Palestine flag on their new shirts!”

I had been to Goldsmiths only a few weeks ago at the Palestine Society ‘freshers event’ seeking new recruits. I heard Alessia Cancemi, the President of the society seemingly suggest suicide bombing (blowing up civilian commuters on buses, that sort of thing) is a legitimate act of resistance. At the time I described the talk as one of the ‘most nonsensical, baseless and insane rants I have yet to hear *from a student* on a university campus’. Goldsmiths is not new to regressive hate. Last year, the head of the Goldsmiths Islamic Society resigned following a homophobic tweet.

So I listed Goldsmiths as an active society driven through a marriage of blind hatred and ignorance. No surprise then, that it reappeared on the radar so quickly.

Once I had digested the implications of this latest vile action, I used twitter to highlight my disgust and within an hour or two, Jewish News picked up on the issue and ran an article. Since then everyone has become involved, and the Goldsmiths RFC Facebook page was visited by many Jewish people not willing to sit quietly in the face of antisemitism.

Wiping Israel off the map

Let us first clarify. There are two symbolic elements on the rugby shirt,  the Goldsmiths PalSoc logo and the Palestinian flag. This is important because those supporting the action only refer to the flag. As we all know what the Palestinian flag looks like, let us look closely at the logo:

This of course is the classic map of the radical Islamic extremists who wish to see Israel obliterated. This map of ‘Palestine’, includes within all of Israel. They have taken the democratic will of a nation of 8 million and simply trodden it out of existence (with big rugby boots apparently). The astonishingly ignorant Vice President (Welfare) at the National Union of Students, Shelly Asquith, tweeted her support for the action: 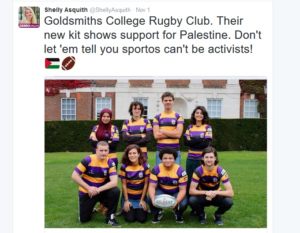 One wonders just what about the ‘welfare’ of the students who might not like such an obscene political statement placed on a piece of sporting kit. Like the two dozen Israeli students studying at Goldsmiths. Or the majority of Jewish students there. But it isn’t just the NUS that doesn’t care about Jewish students. Their welfare is of absolutely no importance to Goldsmiths either, as Daniel Nasr, the Goldsmiths Student President, was so quick to demonstrate  yesterday.

As the anger over the decision rose, the university appeared to criticise the action, suggesting, as we all know, that sport and politics are best kept apart. Danny Nasr then published a defence of the decision and attacked the university.  His response is both enlightening and frightening.

He firstly defends such political actions, using examples of individual voluntary sporting protest, such as an athlete choosing not to stand as an anthem is sung. I do hope he is not so stupid as to fail to understand the difference between an individuals voluntary act of protest and a creeping imposition of political will onto others. Note too, the title of his piece refers to the wearing of the flag, whilst completely ignoring the fact that Goldsmiths RFC has publicly promoted a political ideology that will inevitably lead to a second genocide of Jews. Don’t believe me? Look at the map.

“This morning I met with the University’s communications team and asked them to retract their statement and issue an apology to the Rugby Team. They refused at 5pm today.. “

He went on to suggest that the university threw the students “under the bus”, “opening them up to more abuse, harassment and senseless trolling”.

Nasr simply cannot understand why the university is failing to support such a stupid and outrageous action. ‘We should be protected’, he screams. The fact the idea should be scrapped because it was wrong and steps well over the lines of acceptability doesn’t enter his mind.

His reasoning is simple:

“Although some argue that sport doesn’t typically have an audience that is ‘political’, we can use these platforms engage a diverse cross-section of society- to enable a proactive and immersive political experience, opening up debate and bringing it into the mainstream.”

Nasr is willing to go far to protect the beliefs and sensibilities of people like him. Cross a line of what is considered acceptable, and abuse will be hurled in your direction. ‘Homophobe’, ‘Islamophobe’, ‘racist’, ‘sexist’. There is of course only one group not protected by these thugs; Jews.  They give lip service to antisemitism of course, but don’t actually ever see it. Jewish claims to antisemitism are discarded.

And when it comes to those things they believe in, these we must have shoved down our throat. Even into areas not normally transcended by politics. And the Student President at Goldsmiths doesn’t see the problem with such insidious encroachment. An invasion of political will into areas normally protected from such interference.

Because otherwise there is no freedom you fool. It is like hanging the ‘party flag’ at every meeting, every dinner engagement, every sporting event. Don’t you see what you are promoting? Individual freedoms, opinions, the right to choose, all get trampled underfoot, taking a back seat to your sensibilities, your vision, your opinion. You justify ‘invading’ safe space, because you can ‘use the platform’. Shameful. Disgraceful. We have names for people like you.

And then Daniel, I believe you were born in Lebanon. Which is interesting, because of Lebanese treatment of Palestinians. Inside Lebanon Apartheid really exists. Special property laws. Career paths that are closed. Children born inside Lebanon denied citizenship. Lebanon has seen brutal treatment and slaughter of Palestinians. Why not boycott Lebanon until it provides citizenship to people who were born in Lebanon sixty years ago and have lived every day of their life deprived of their basic freedoms by the Lebanese government. Stick that on your rugby shirt.

Antisemitism in the Palestine Society at Goldsmiths

But of course, unlike Lebanon, Israel is majority Jewish. And as every PalSoc and Isoc (Islamic Society) around London is brimming with Muslim students eager to demand we all boycott Israel, we have to remind ourselves of the driving force behind these actions. This short clip from the recent attempt to deny an Israeli speaker a platform at UCL:

Or in other words. The two dozen Muslim majority states in the Middle East that abuse human rights on a daily basis are not a problem. One tiny state however, has too many Jews inside. Perish the thought we should make an accusation of hypocrisy. Last time I mentioned Alessia Cancemi’s stupidity, let us now look at one of her partners in crime at Goldsmiths, fellow ‘Twinning Officer‘, Mona Mounir.  This a photo from her Facebook. 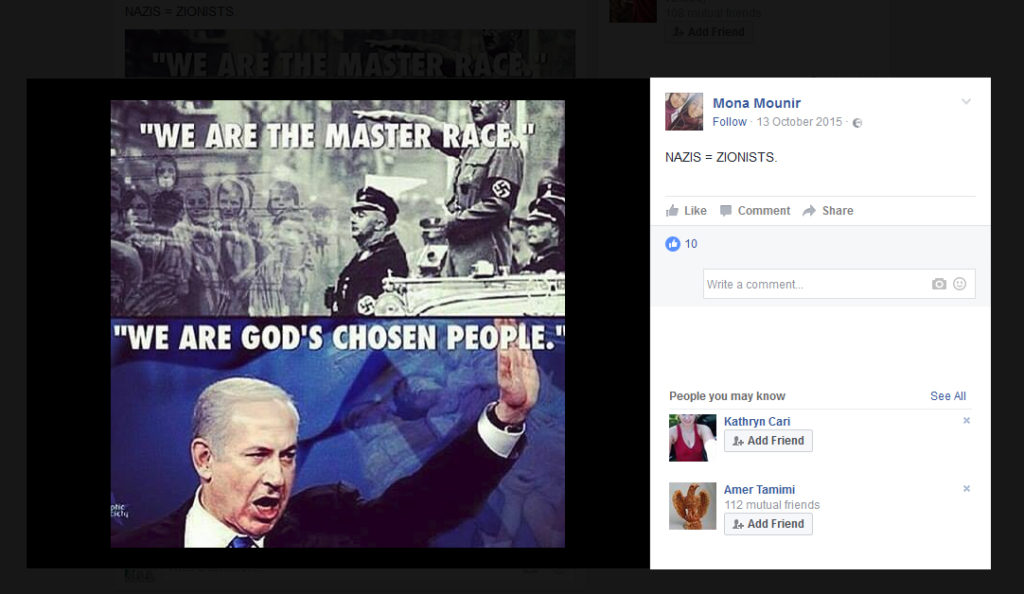 So let us not beat around the bush and pretend we are dealing with rational humanitarian arguments. It is antisemitism. These students are importing a fight we should want no part of. They will not accept ‘no Jewish majority state’. The entire Middle East is full of nations brutally abusing the human rights of everyone in sight. Genocide is actually taking place. Israel is by far the most free, most liberal and most democratic nation in the entire region. So putting aside the whining of a few radical left communists, why is there BDS on campus? The simple truth is that Israel’s Jewish majority is the problem. If Israel was a Muslim majority state, there could actually be blood in the streets every day in Hebron and still there would not be a single Palestinian Society on any campus in the UK.

And just before Mona Mounir protests and suggests that hers is simply a call for equality and the rights of the Palestinians. Let us expose the hypocrisy further, via more assistance from her Facebook page. 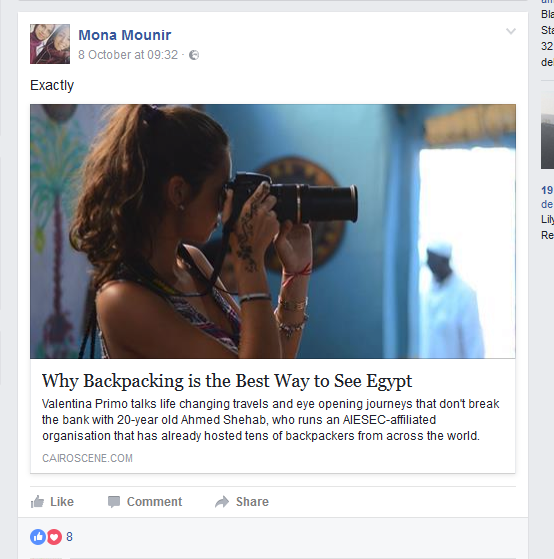 Think about this for a moment. Read a news report about Egypt’s brutal closure of Gaza. One about Egypt flooding tunnels. Scan Egypt’s Amnesty report which states the “human rights situation continued to deteriorate”.  Egypt completely trampled on democracy and slaughters political opponents at will. It has demolished homes and forcibly evicted thousands of Palestinians, and yet here is Mona Mounir, part of Goldsmiths dynamic Palestinian Society, promoting tourism to Egypt. Why? Well why do you think?

I think Mona was recently in Saudi Arabia too. Most of the Goldsmiths rugby cannot openly step foot in Mecca. Mona herself states she cannot enter without a male family member as escort. Let us not begin to analyse Saudi abuse of freedoms. Yet Saudis are not Jewish enough to boycott.

As always, you don’t need to dig deeply. On the society page, I looked at the list of PalSoc events. On October 20th, they had an event titled “What is Modern Israel”. Apparently, someone called Samia Malik attended. She appears also to have been Goldsmiths educated.. Malik is one who believes ISIS is an Israel creation. These are just some of her posts: 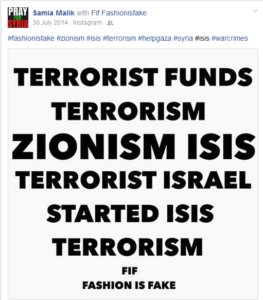 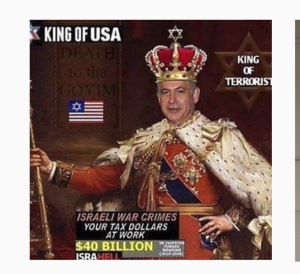 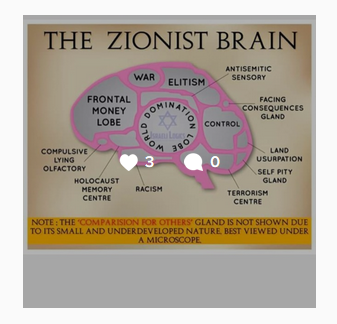 I think the last image really needs looking at properly to understand the depths of this antisemitic hatred. ‘Holocaust memory centre’ ‘compulsive lying’ ‘frontal money lobe’ ‘world domination’. This is the ideology being fed at Goldsmiths PalSoc. This is what the BDS movement caters for. An end to the Jewish majority state.

The university needs to stamp this out. I have no doubt the rugby club has been ‘won over’ via a friend or girlfriend, but the squad, should see through this transparent action and ask themselves whether they really want to be used to push what is blatantly Jew hatred. To take antisemitism out of the secret theoretical confines of the university and onto a sports pitch that really should remain totally free of such vile, hateful and regressive ideologies. This continent has seen enough thank you very much.

8 thoughts on “Dropping the antisemitic rugby ball at Goldsmiths University”