On Saturday 14 October, a group of anti-Israel activists went to protest outside of Jason Atherton’s ‘Little Social restaurant’. The group behind the demonstration was ‘Inminds’, a small, highly active, and particularly thuggish group, whose activists clearly have an issue with Jews. This time, they gathered to protest a restaurant participating in ‘Round Tables‘, an international culinary festival in Tel Aviv. As is so often the case now, you can become a target for these haters merely for not being antisemitic yourself.

When I arrived, Jonathan Hoffman was already there. Standing by the door of the restaurant with an Israeli flag. Taking this position meant the Inminds crew wouldn’t be able to crowd the restaurant door and intimidate the restaurant’s clients. Three other counter demonstrators arrived, Richard Galber, Tony Jacobs & Stephen Franklin.  These four Zionists spent their Saturday lunchtime, countering an attack on the legitimacy of the State of Israel.

On the other side of the argument, the Inminds crew arrived. In the end there were fifteen protestors in total (not counting two children). As is always the case when dealing with material of this sort, many of the links on this page may not be safe to open at work.

Sandra Watfa is the ever-present face of Inminds: 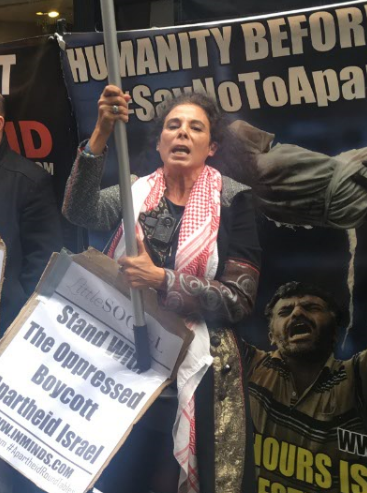 At the Al Quds march in June, she was one of the speakers. Sandra Watfa was also picked up by my PSC report (page 35), that detailed antisemitic posts inside PSC related activism.

As an example of Sandra’s feelings towards Jews, this is a hashtag she used on more than one of her posts:

This is another Rothschild conspiracy post, that Watfa shared. Just in case you thought Jewish global financial control, accusing Israel of being behind 9/11 and 7/7 was as far as Watfa would stoop, here is a little bit of Holocaust denial thrown in for good measure:

Like most activists who search for anything that stokes their own personal demons, Watfa shares material from people like David Icke and pushes website material awash with Nazi ideology. Often sharing hard-core Jew hatred, far removed from any excuse about Zionism. This is a link to the post she shared on the ‘Holohoax‘. The video on the right  was of a history lesson given by  antisemite and Holocaust Denier, ‘Eustace Mullins‘. Sandra Watfa, is the public face of Inminds.

At the peak of the demonstration, there were fifteen people in total on the ‘anti’ side, and three of those were there to film (Seymour Alexander, Peter Marshall and Abbas Ali). This left twelve anti-Israel demonstrators. Ten of those twelve are regulars, whose faces are often seen at these types of events.

One of those, Derek Jardine was holding up the far right hand side of the banner. Jardine had also been to two other recent Inminds demonstrations. 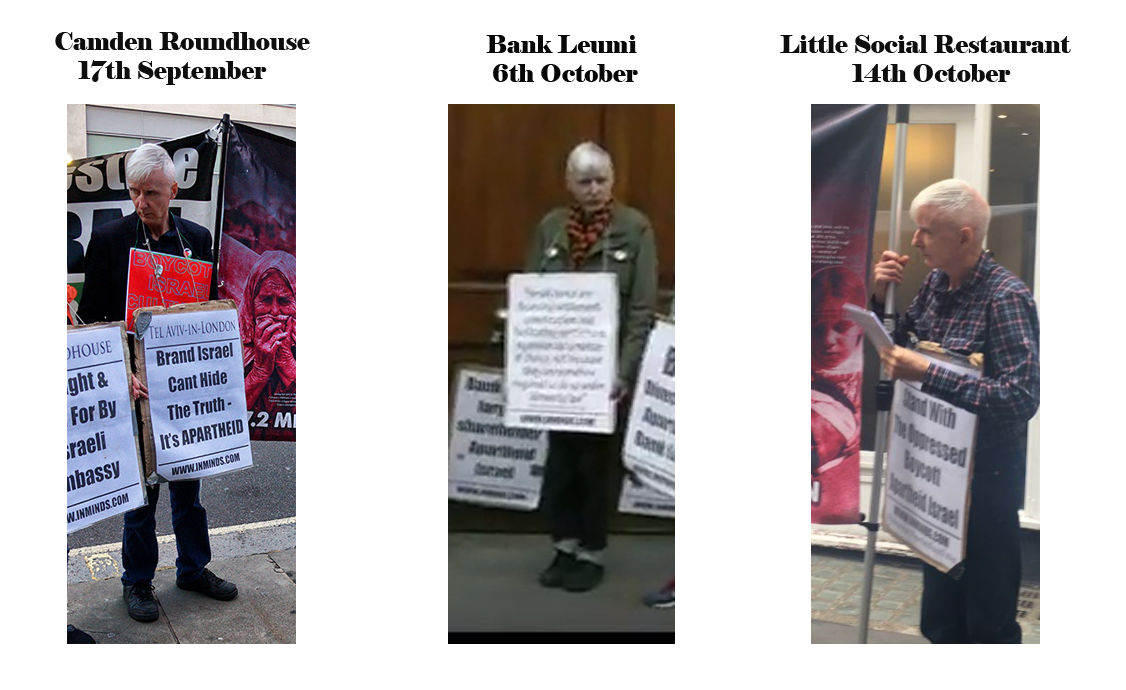 When Derek Jardine wasn’t busy singing ‘from the river to the sea, Palestine will be free’, he did take time to suggest ISIS was an Israeli supported thing. I confronted him on this, and asked where it is possible to gather more information; what is his source? He said ‘everywhere, and then, just google it’. I told him this isn’t on the BBC website, at which point he sneered at me.  ‘Is that where you source your news from – the Zionist BBC‘, he responded. I did ask him to clarify exactly what ‘truth telling’ sites I should be visiting, I received no response. 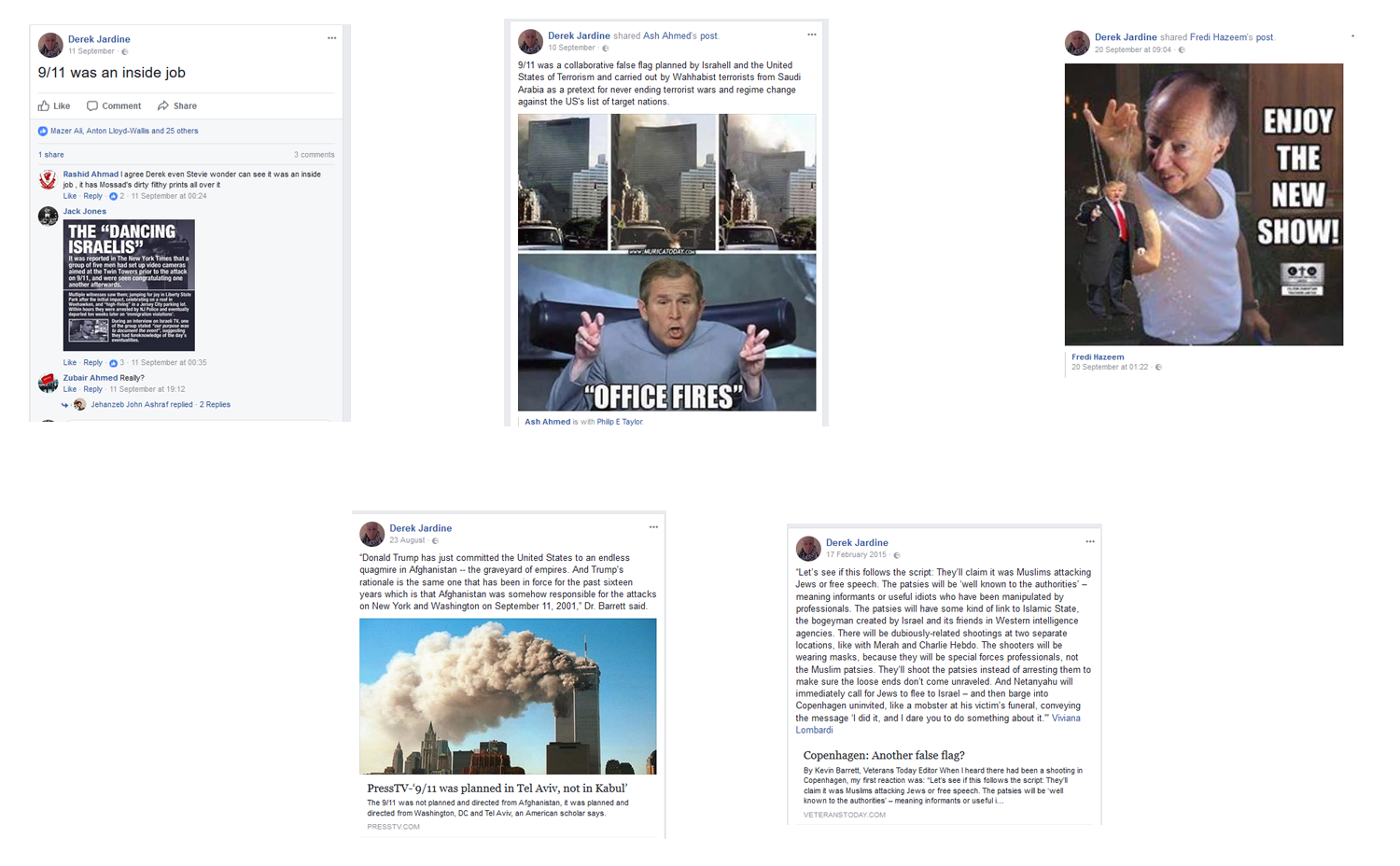 Jardine’s Facebook profile suggests he used to work at ‘Gay News’. He shares material from PressTV, a propaganda arm of a nation that well, oppresses and has executed gays. He oddly speaks of Bashar Assad being ‘respected’ before 2011, and welcoming foreigners. The Syrian regime has never been respected and has always persecuted Gays.  Some of the material Jardine shares comes from Holocaust denial sites like Veterans Today, and his timeline gives access to material from many right-wing ‘alternative news’ websites. Sites that also have issues with Muslims and Gays. The man is clearly not just someone with issues against Jews, he is also really, really stupid. 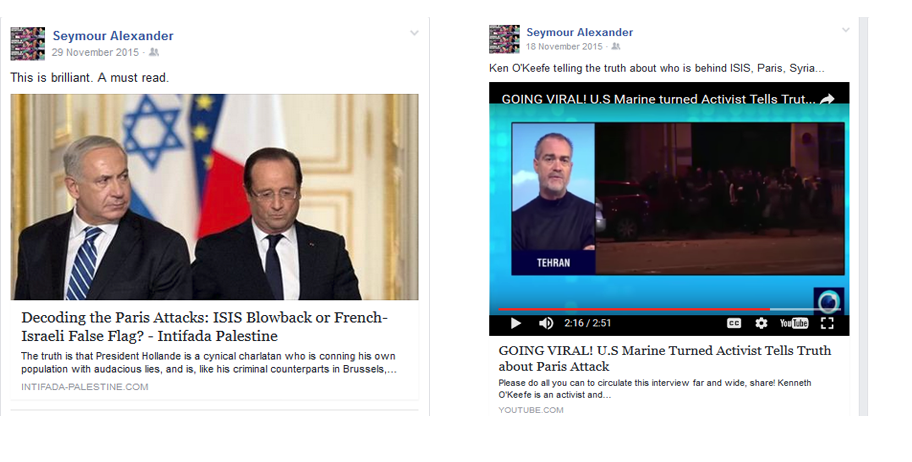 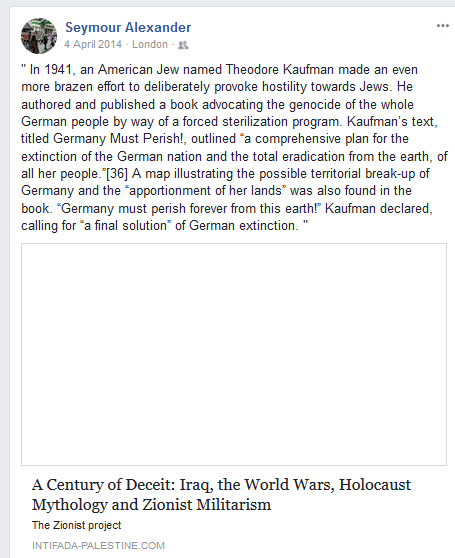 This from the article:

‘Since the dawn of Zionism in the late 1800s, Jewish-Zionist ideologues had been ravenously promoting the story of “six million” persecuted and oppressed Jews. “We Jews need a homeland of our own because we are persecuted wherever we go” was the traditional Zionist argumentation. But the First World War did not produce the circumstances needed to foist this propaganda on the world. Jews were not singled out for persecution or mistreatment by any belligerent in that war, which is why the Zionists, following the dictates of their founder Theodore Herzl, deliberately aided and abetted Hitler’s forces to corral their fellow Jews into ghettos and concentration camps during the Second World War..

‘Revisionist scholarship has determined that somewhere between 100-150 thousand people perished in Auschwitz mainly as a result of disease and starvation, which was not a deliberate act on the part of the Germans but rather the outcome of Allied carpet-bombing of Germany’s infrastructure.’

A copy of the article is available here.

Elleane Green was also at the demonstration.  Green is a co-founder of the secret Facebook Group ‘Palestine Live’. The other ‘co-founder’ is Tony Gratrex, a hard-core 9-/11 truther and rabid antisemite. The Facebook group is a cesspit of anti-Jewish activity.

Green proudly boasts she was the one who helped identify me, so as to have me removed from the QEII Palestine Cultural event. As she also took a photograph of me to disseminate online when I was at the Labour Party Conference, it seems Elleane Green has a thing for me. She has a thing for other Jews too: 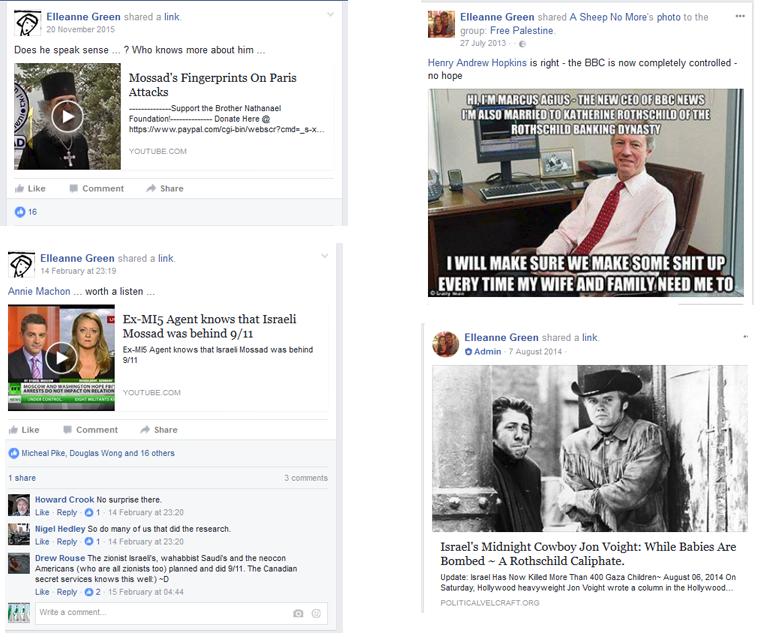 Talking to other haters

I spent much of the two hours, trying to talk to some of the demonstrators. The amount of ignorance, from people actively trying to attack a liberal democracy, was astounding. I have been around this block before, I know that most people engaged are ignorant of certain facts, but I am always surprised at how under-prepared the hard-core activists are when it comes to having their central beliefs challenged. It is almost as if they haven’t even run through these arguments with themselves.

I was told by three different demonstrators, this was about the creation of a ‘one state for all’ secular democracy. This as they stood under the banner of Inminds, an ‘Islamic group’. One spoke to me about the slave trade and Jewish lobbies. Another spoke about false flag attacks. Yet another about Jewish cowardice. None of them had a historical grasp on the conflict at all. These people are clearly driven primarily by prejudice.

As is always the case, the statistics speak for themselves. Even though some of the demonstrators remain unidentified, we know at least 50% of those present, have shared or voiced antisemitic ideology. Of those identified, the figure was over 75%. It is simply unacceptable that groups displaying this level of anti-Jewish prejudice, should be free to demonstrate against any business they choose.

At one point, one of those demonstrating tried provoking Jonathan Hoffman. Repeatedly poking him, daring him to react. He was clearly spoiling for a fight. Jonathan did not respond and eventually another counter-protestor, Tony, came to diffuse the situation.

But this isn’t just a game between a few Jew haters, and some Jewish folk. This demonstration took place in a narrow street, directly outside of one restaurant, but impacting also on one or two others nearby.

These business owners are directly affected by those with anti-Jewish prejudice. In response, if you are going to a restaurant in the area, take a small detour, and book at Little Social. It is in a central location just two minutes from Oxford Circus. There are places to eat next door and opposite that were also intimidated by the demonstration. Booking a meal at any eatery in Pollen Street would be a solid response to this type of thuggery.

I have two hours of footage before my mobile camera died. I have gone through quickly and placed together a few small clips.

On a final note, one of the photographers, posted a report online about the event

Look at this group of conspiracy theorists and antisemites. How can anyone consider this gang a ‘Human Rights Group’. Peter Marshall’s description is a disgrace. It is this central public misconception that must be fought. The battle is not between us and them. The real fight is having this hatred recognised by others for what it is, and then dealt with accordingly.