As each page of the Thomas Suarez book, State of Terror, is turned, another horrific statement against Zionists appears. The book was called a ‘tour de force‘ by Ilan Pappé. Jenny Tonge referred to its central ‘truth‘. Publishers Weekly suggested it is ‘an impressive display of historical excavation’.

So we (David Collier and Jonathan Hoffman), went digging to see if the Thomas Suarez story ‘held up’ – to see if he had used his sources properly when he wrote his book. This meant dozens of visits to the National Archives at Kew, and other days spent diligently reading books by anti-Zionists such as Ilan Pappé, Hanna Braun and Yosef Grodzinsky. There is no getting away from it. ‘State of Terror‘ isn’t just a vile book, it isn’t just antisemitic, it is a pyramid of errors. Far too many for this to ever have been accidental.

As Thomas Suarez opens his introduction he uses a quote from 1946. He forgets to tell his readers that he cannot confirm it was ever said. This is the way the book begins. The first archive file he lists says something very different to the way he describes events in 1938. This is the way the book ends. Between these two are a couple of hundred pages full of unsupportable libels. We know they are unsupportable because we checked some of the source material behind the claims. Today we publish our report.

Most of the errors inside the book stem from sloppy research. The result of a rabid little man, motivated by hatred, grabbing at archive files in a desperate attempt to find something, anything, that sounds like it is attacking Zionists. Suarez is no historian and does not possess the frame of mind to provide context to anything he writes. For a wannabee historian, this is a fatal weakness.

Thomas Suarez and his errors

There is no understanding about how to use the material he has in his hands. His choice of the source he uses, often gives away his motives. When the most reliable source for a particular event would be the National Archives he used for years, he still turns to the ramblings of an anti-Zionist Israeli, simply because it works best for the picture he desperately wants to paint. The result of that episode was yet another huge historical mistake in his book.

The inversion of meaning is another common theme throughout. We lost count of the number of times his words were contradicted by the source material he used in support of his writing. The ability to twist the meaning in such a fashion was only outdone by his use of the strategy of omission, skipping over all those items that proved his central arguments were false.

Here is just one example from the many errors listed in our report. From the book, page 106. The year is 1945. Teddy Kollek (future Mayor of Jerusalem) was being interviewed by the British. Suarez claims that Kollek suggested the Hagana, Irgun and Stern ‘choreographed’ events. That ‘according to Kollek, the Hagana, and Irgun would agree on a particular attack, the Irgun would carry it out, and then the Jewish Agency would then publicly condemn it‘.

This line of reasoning is important to the Suarez story. Suarez cannot show that some Zionists were extremists. He needed to show all the Zionists were. Thus, the actions of Stern and the Irgun had to be shown to be undercover actions of the Hagana. Without this, Suarez has no story. In his endnotes (number 202), Suarez suggests this information came from Kollek ‘interview number 8’. This is the content of the interview: 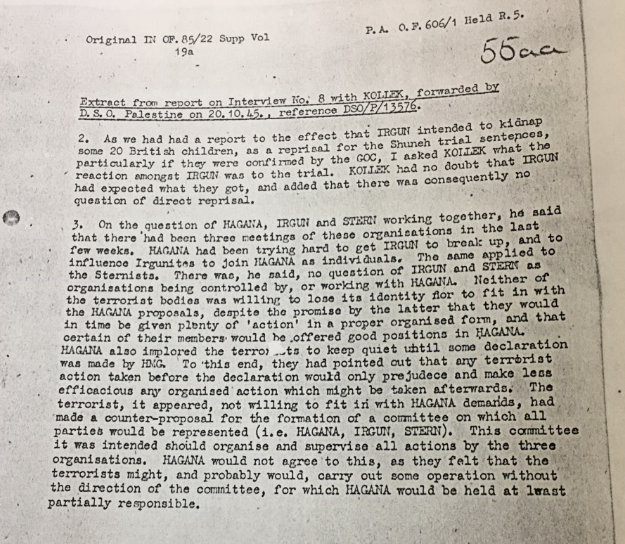 It says nothing of what Suarez alleges. In fact, it says the opposite. Kollek said that there was ‘no question of Irgun and Stern as organisations being controlled by, or working with Hagana‘. Going on to further point out that Hagana explicitly ‘would not agree‘ to cooperation. Rather, they wanted the Irgun to ‘break up‘.

And on the strategy of omission, this an extract from a further interview with Kollek in August:

According to Hagana – Stern and Irgun ‘Terrorism was fatal to Zionism, and the Jewish Agency did not agree with terrorist methods‘. Had this one snippet been put inside the book that Thomas Suarez wrote, his entire argument would collapse. No surprise that it was overlooked.* (see edit below).

The Thomas Suarez book ‘State of Terror‘ butchers truth. It butchers history. For that we call it a fraud. But the underlying message is far more sinister than a nasty little man making up stories. Suarez blames the Jews for everything. At one point, he infers the Holocaust and Second World War might not have happened without them.

There are no depths to which Thomas Suarez seems unwilling to stoop in his mission to attack the Zionist Jews. Reading the book the first time was nauseating. When you read it again and realise that in many cases the author is making things up, you are left with little doubt about the motivation.

At one point, Thomas Suarez attacks a Holocaust survivor who had escaped Josef Mengele’s Block 10 medical experiment laboratory, simply because she got in the way of the story he wanted to tell. His is not a humanitarian argument. When Holocaust survivors, refugees, wash up on the shore seeking freedom, Suarez condones forcibly removing them and shipping them away to be put back into camps. If a ‘good Jew’ becomes a ‘bad Jew’ simply by escaping from Nazi Germany to British Palestine, then the only good Jew becomes a dead one.

The message that is screaming from the pages as you turn them is that this is an author who has issues with Jews. From a story of a drunken Jewish soldier in 1919, to events surrounding Jewish children who survived the Holocaust, Suarez sees Jews as Zionist monsters who ‘hijack’ Judaism, ‘kidnap’ Jewish orphans and ‘coerce’ Displaced Persons.

This book has an antisemitic stench from the very first page to the very last and Thomas Suarez wrote every word of it. According to Suarez, when it came to saving Jews in Germany, Zionists only did it for their money. For the most part, Suarez has every Jewish person in British Palestine willing to let their family members rot.  Each one of these ‘monsters‘ plotting to ethnically cleanse the Arabs. Suarez even included in this libel Jews who wanted a bi-national state. There is no spectrum, no way out, if you are there, you are guilty. This is the Suarez method. It is inhumane, racist, and against Jews, clearly antisemitic.

We stopped the research because we ran out of time. The material is far from exhausted. On the last day, a few final statements were randomly chosen, with dozens of suspect items cast aside. Whatever is in the 20,000+ word report, there is just as much still uncovered.

Suarez’s book was praised by a Professor at the University of Exeter. It is lauded by a sitting member of the House of Lords. The rabidly antisemitic SPSC recently promoted a speaking tour for the book. Thomas Suarez delivered a vile talk on the campus at SOAS. Publishers Weekly endorsed and promoted a putrid antisemitic book. Now he is off to the USA, where the First Amendment allows any old antisemite to speak freely.

We cannot let this type of historical fraud continue unchecked. It is time to draw a line in the sand. We see you. We know what you are. This report is published today, so others can see you too.

*EDIT 7/9/2017. There seems to be some clarity required over the Hagana and Irgun. This is Suarez pillar #9. We all know that some Hagana / Irgun cooperation took place, (esp post-1945).  Suarez’s intention however is to erase the ideological differences between the Hagana, Irgun and Stern and blur time periods. It is part of the general strategy to suggest all Jews in Palestine were extremists.

33 thoughts on “Exposing an antisemitic fraud: The case of ‘State of Terror’ by Thomas Suarez”