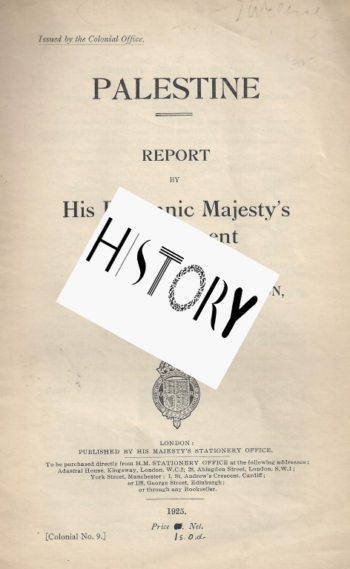 The Mandate: From 1919 to civil war, antisemitism and Bergen-Belsen

I have been spending time recently in the British Archives at Kew. I am working on a project (with Jonathan Hoffman) that is due to be published on Sep 4th. It has meant spending time, inside the files that recorded the British view of the events of the Mandate. Engaging with the mindset of those that wrote the documents. This ‘perspective’, and the bias behind the written conclusions, are often missed by researchers. The British records highlight the growing adversarial nature between the British and the Zionists as the Mandate evolved.

It has been an emotional and yet empowering experience. During the research, I found some files not related to the project, that I simply couldn’t leave idling away on my hard drive. So here are a few interesting snippets taken from British Archive files from the 1919-1948 period.

The British archive file FO 608/99 is full of documentation regarding the 1919 Versailles Peace Conference. It is fascinating because it highlights 1919 attitudes towards the land and the people that are entirely out of sync with the way they are described today. 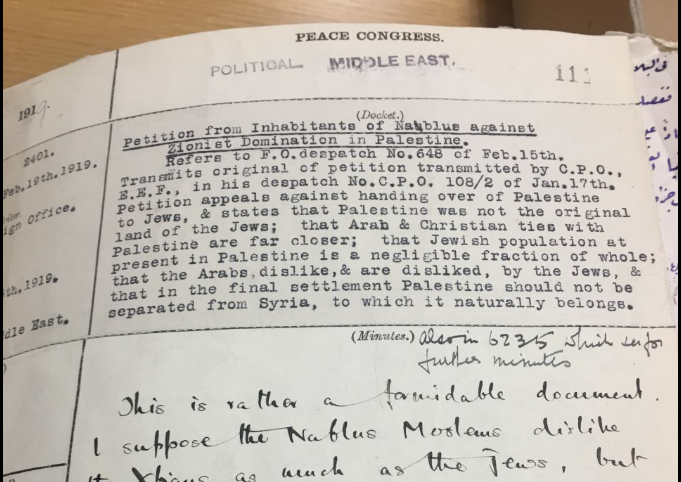 A dislike of Jews and Palestine, ‘belongs’ to Syria. Arab communities across the globe were not so vocal about their ‘Jew hating’ credentials, but went straight to the point over Syria. From the same file: 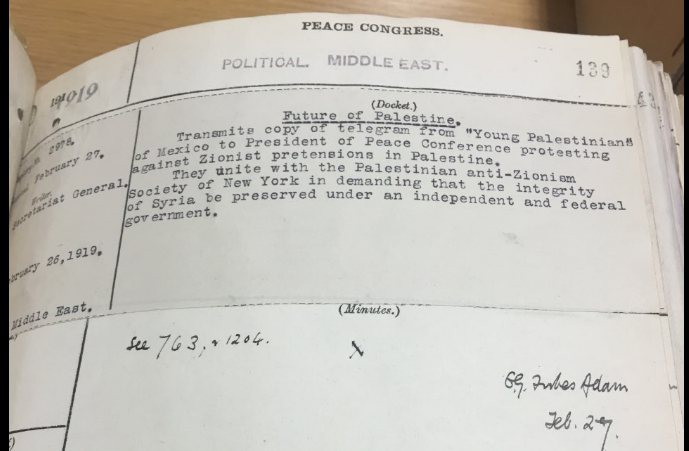 The ‘integrity of Syria’. Reading the British description of the inhabitants is also enlightening (Memorandum by Sir Erle Richards, from section 1, ‘territories in question’:

‘As to the Southern Boundary there are a number of different questions. On the one hand, it is contended that the cultivable areas south of Gaza ought to be part of Palestine because they are necessary to the subsistence of the people. On the other hand, this area is inhabited by Bedouins of the desert, who look really towards Sinai and ought not to be associated with Palestine at all…. the remaining area South of Gaza and to the Dead Sea and Gulf of Aqaba should be reserved to the Bedouins and attached to Egypt, since the tribes are identical with those in the Sinai Peninsula’.

These writings illustrate perfectly the land being discussed was devoid of any national identity. And just as importantly the people in the land, were not connected to each other. The Arabs in the South, aligned with Egypt, those in the East with Syria, and Arab Christians in the Galilee, would have aligned with Lebanon. 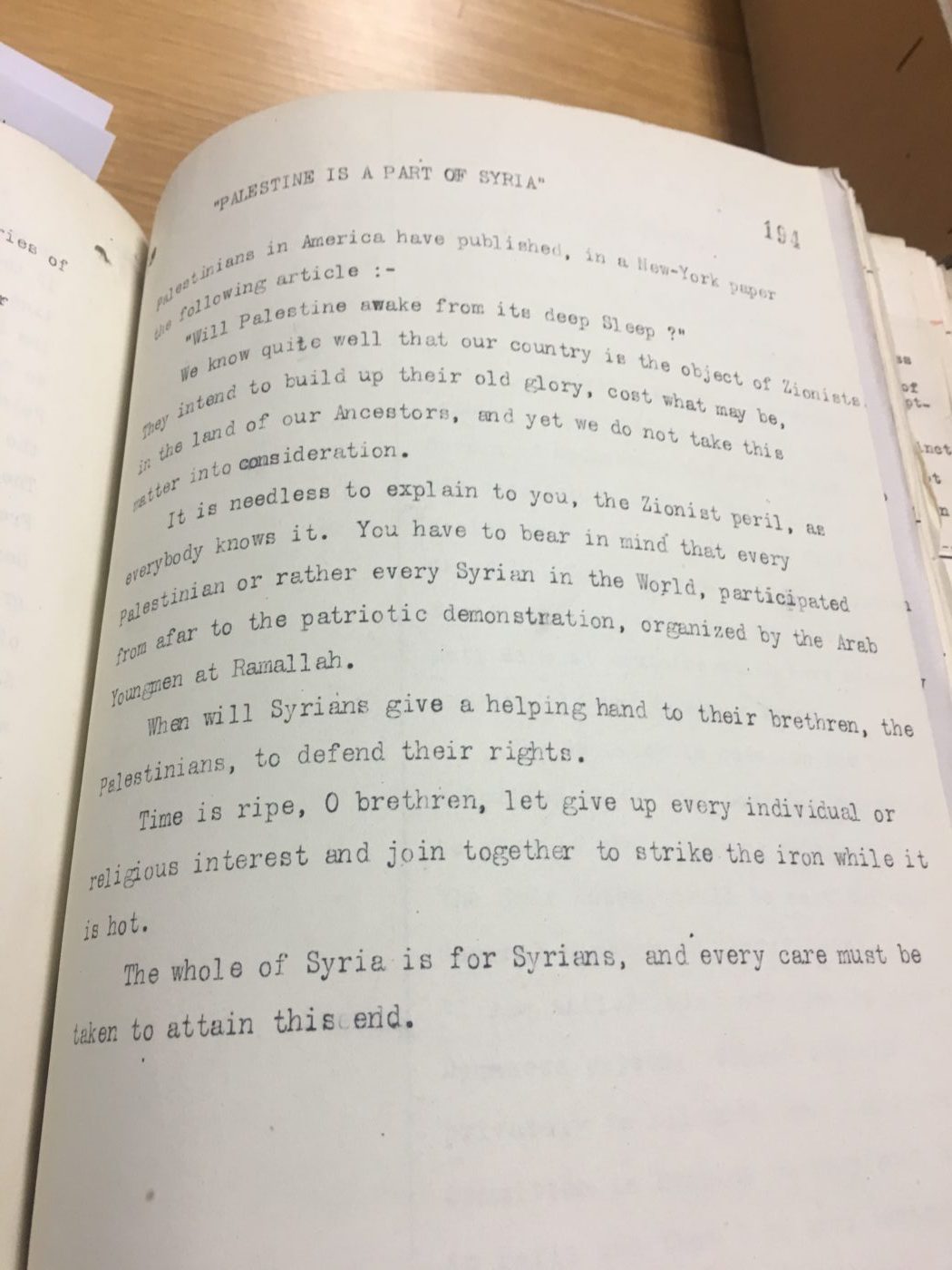 There is a civil war inside the Mandate

Jumping through the Mandate, to early 1948. From File FO 141/8742 (most images below are from this file), a casualty count. A British summary of incidents reported to the police, between the time of the Partition vote and late April 1948. 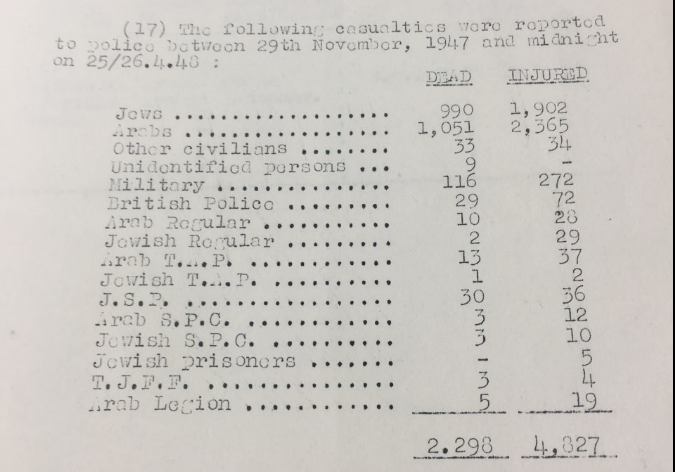 It clearly shows that the fighting was bloody, and at this point, the Jews were suffering badly (remember if they were proportionally a smaller number of the population, then relatively equal casualty figures indicate the serious consequences such figures would imply).

The next document is a British diplomatic telegram from Amman from January 15th: 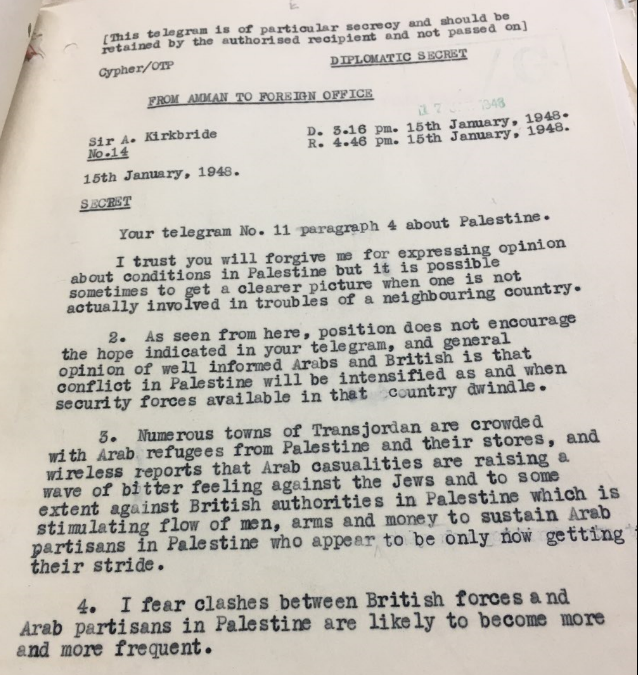 Look at point number three. It indicates that the radio reports (that in January were overstating everything), were leading to an influx of men, arms and money to help fight the Jews. The other important point of note is the ‘crowded’ towns in Transjordan, full of Arab refugees. This is confirmation of refugee flight long before any Zionist offensive (Jan 15th is really early and if the towns are already crowded, then the Arabs were fleeing in December 1947.

The next document is simply fascinating. A weekly intelligence update from 23rd February 1948. From beginning to end, this single document is dripping with historical significance. 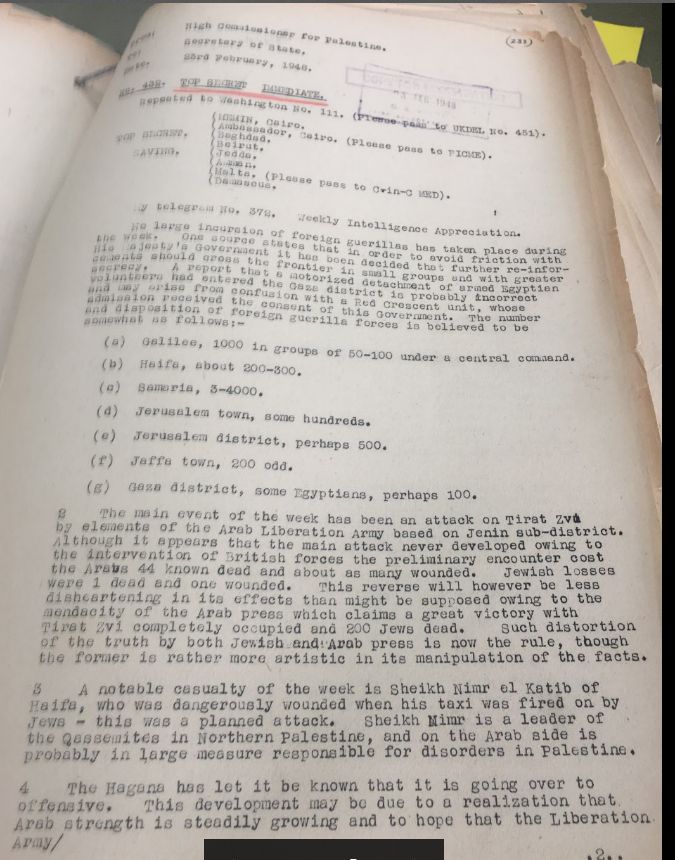 The first section contains the estimated size of foreign fighters (for the most part the ‘Arab Liberation Army’), that had begun to inflict heavy casualties on Jewish forces. These were foreign fighters from Lebanon and Syria who had crossed into the Mandate lands. This element of the civil conflict is belittled by revisionists *precisely because* it is so important to the real story. Then there is a report on an Arab attack on Tirat Tzvi. The attacking Arab forces were repelled and destroyed by the British. 44 Arab dead. Which in turn means that even at this late stage, while most Jews were being murdered by Arabs, many Arabs were still being killed by the British.

Note too that item four, has the Hagana begin to talk about ‘going over to offensive’. Why? Because of the ‘growing’ strength of the Arab Liberation Army.

Then on the 30th April, a Telegram from the High Commissioner for Palestine to the Secretary of State:

It starts on the page before (not visible in the image).

‘Fear breeds recrimination and they (the Arabs) are perhaps willfully blind to the fact that for months past they and their press have clamoured for the entry of the Foreign Arab Guerilla bands which, having successfully stirred up the Jews.. are now proving quite unable to protect the local Arabs from the Jewish reaction’ – CONTINUES FROM IMAGE- ‘In their hearts the Arabs realise that their much vaunted Liberation army is poorly equipped and badly led’….’and they themselves misled; in their hearts they must pin the blame on someone’…. ‘the Palestinian administration incessantly requested that armed Arab bands should at all costs be kept out of Palestine under after termination of the Mandate, but the bands entered and were defeated’…. ‘Many of their so called leaders are fleeing the country and the Effendi class do not seem to be ashamed of watching the contest from the touchline’.

‘Jewish traits’ during the Palestine Mandate

‘The old Jewish trait’. In places British antisemitism drips from the files. It isn’t restricted to the British though. And this antisemitism isn’t new. The next image is a Diplomatic report (from file FO 371/ 68365) on a meeting of Arab ministers in December 1947.

Notice how the Arab leaders, when contemplating the support they would receive for the upcoming battle against the Jews, knew they could rely on the ‘anti-Jews‘ in many countries. This deliberate partnership between the anti-Israel cause and (the ‘anti-Jews’) antisemitism, was there from the very start. It is visible today, wherever anti-Israel activity exists.

These documents are only some of thousands I have seen at the archives. The central truth of the conflict has remained constant. The revisionist ‘narrative’ takes carefully selected events, airbrushes out unwanted information, and magnifies unfavourable Zionist actions to the point that the reader is no longer absorbing a factual tale. The underlying narrative is a truth we must own, if we are to fight against those that seek to distort history and rewrite the sequence of events. The journey into the archives was empowering for this reason. It reinforces the central truth behind the history of Israel.

The final document, I posted on my FB page some days ago. I was flicking through a fairly ordinary bureaucratic file, passing over and endless stream of telegrams and there it was. An impossible to describe moment awash with multiple layers of differing emotions. It is from the Jewish DP’s at Bergen-Belsen. Still captive months after liberation. It doesn’t need, introduction or explanation. It just needs you to view it, read it, and reflect. 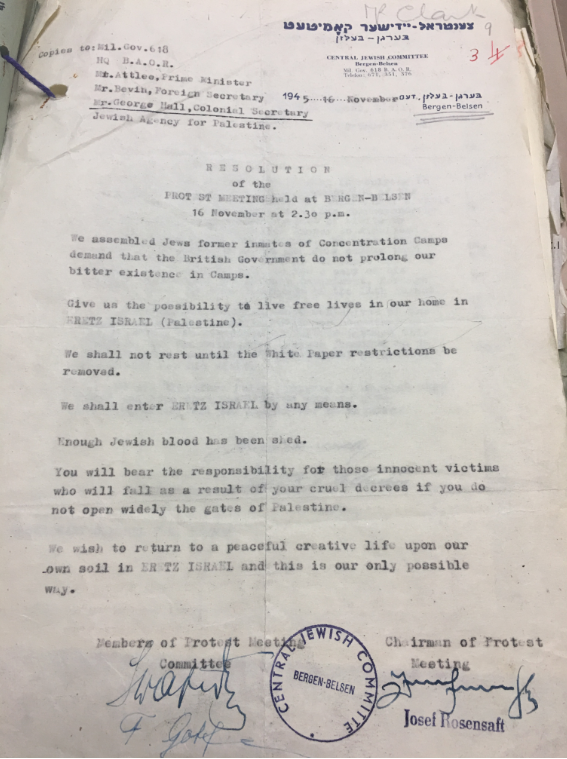 32 thoughts on “The Mandate: From 1919 to civil war, antisemitism and Bergen-Belsen”