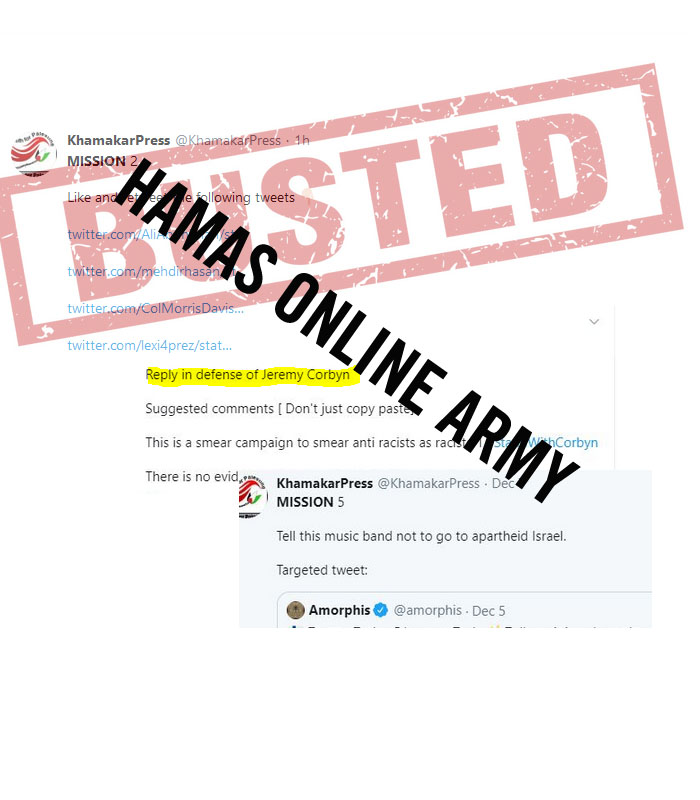 Hamas and pro-Hamas outlets are conducting an online campaign to help Jeremy Corbyn win the election. A Hamas propaganda outfit deploys armies of trolls to attack Jewish campaigners fighting antisemitism, they support Corbyn online, help to create pro-Corbyn trends and vote for him in online polls.

Take the account, KhamakarPress. They have a website, with contains a link to join a WhatsApp group. When you join the WhatsApp group, other numbers in the group become visible. Several carry the 972 59 country and area code – including the group admin. 972 is Israel. 059 is the code explicitly reserved for Jawwal, a Palestinian mobile network.

The admin of the group is Wafa Aludaini, a propagandist from Gaza. Aludaini’s FB page is connected with 100s of key anti-Israel activists in Europe and the US.

The website’s European HQ seems to be in Holland and it is linked to an Islamic Organisation there. The Dutch Islamic website even defended a Salafi school that was closed due to links to terrorism.  The KhamakarPress Facebook page is run by Henny A.J. Kreeft. He is a Dutch convert to Islam and has penned antisemitic articles about the ‘Jewish empire.’ He co-founded a political ‘Muslim Party‘ in 2007.

When you follow Khamakar Press, you soon realise that they are connected to massive anti-Israel initiatives. Take the ‘Palestine Ambassador’ website. It is a website set up to train anti-Israel activists. Another connection is the 16th October Facebook group – an anti-Israel propaganda outlet. All run by those who run Khamakar Press. The 16th October group claims it is unit of ‘Aithoraya Institute for media and communication.’

Whatever it is, ‘AlThoraya’ is official. Remember, 16th October is run by the same Aludaini that is the admin of the WhatsApp group.

The Althoraya website is in Arabic. They have a section on ‘media and communication’ which is run by none other than Wafa Aludaini. The aim of the unit is to train people to be anti-Israel propagandists.

And here we run into serious trouble.  On the studies and research page, the website informs us that it was headed by Hoda Naem, a Hamas official and deputy on the legislative council. A Hamas MP was running this website. This is a not just a Gazan propaganda outlet it is linked explicitly to Hamas. When they wanted the website updated, they used the same person who updated an official government ministry website.

The Facebook page is run by Ibrahim Abu Naja: 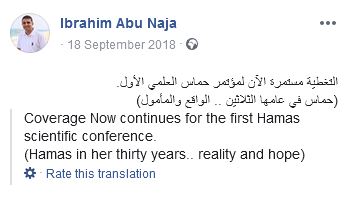 Everyone involved in this outfit studied at the Islamic University of Gaza, which has been described as a prime method through which Hamas converts Palestinians to its cause. One of those currently running the research unit is Suzan Ziyada. This is her account:

This specialised propaganda unit has Hamas written all over it. If this is not a Hamas propaganda outfit – why was a Hamas MP running it?

What does this account run from Gaza do – it actually gives ‘missions’. Such as voting for Jeremy Corbyn in a poll over who won the leaders debate:

Or telling people to retweet and like Jewish Voice for Labour articles.

The JVL Tweet received over 2000 retweets. Evolve politics over 6000. Corbyn won the poll above with 93% of the vote.

An example of an order to attack

Take this tweet. Gnasherjew had posted a viral video of Jeremy Corbyn, So had I. The order went out from Gaza to target our tweets. ‘Mission 2a’: 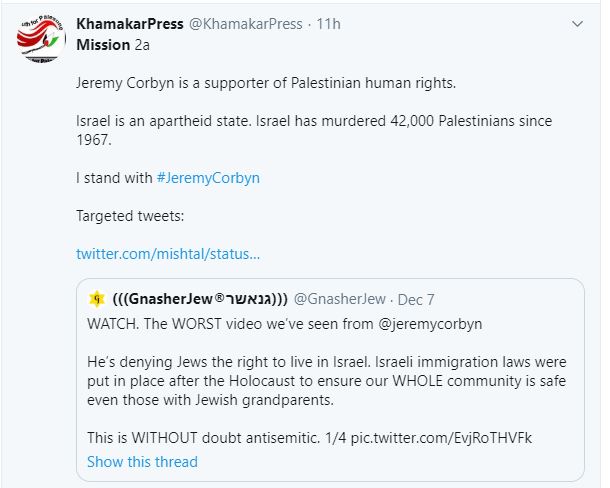 The instruction to target the tweets is given, along with 3 suggested phrases for the disrupting accounts to use. I need to introduce another two suggested responses suggested by the ‘mission’ account at the same time:

Agents were given 5 suggested responses:

They are even told not to copy and paste to reduce the evidence. This is Gazan interference in our elections, run by what seems to be a Hamas propaganda outfit. So what happened?

The response was overwhelming and immediate. These are all individual accounts, some posted on both tweets:

Rabosh is an account that was created in December 2019.

One with an Arabic name created in July 2019: 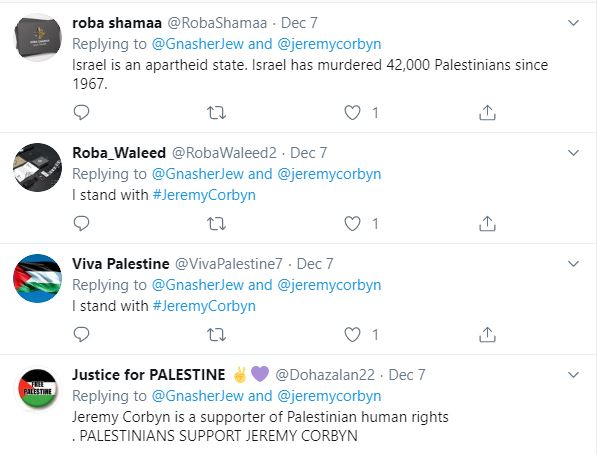 There were more – all these also replied using one or more of the suggested responses:

Which reaches at least sixty accounts that appear to have followed instructions from a Gaza based propaganda account with clear ties to Hamas. These agents explicitly targeted Jewish accounts fighting antisemitism and deliberately promoted Jeremy Corbyn, through the use of simple repetItive comments and careful use of hashtags.

These 60 accounts are just those caught from a single tweet. How many others are there – how many control accounts giving out missions? The way social media works, especially through the repetitive use of names and hashtags, impacts on how other see issues.

These accounts don’t just spread the good word about Jeremy Corbyn using hashtags. They are told to share material. There are endless retweets of all of the anti-Israel websites, with a special focus on the UK and US. Everything from Jewish Voice for Labour to Ilhan Omar. 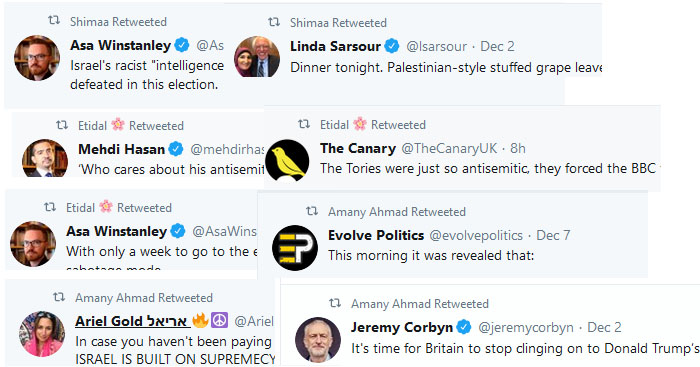 These agents are used to dog-pile artists who are going to Israel. Iron maiden, Celine Dion and Amorphis have all been targeted:

And they’re told what to say: 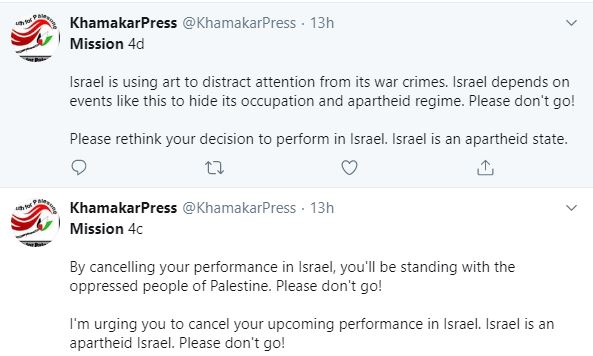 America is a target too.  This Hamas linked outfit is directing people to ‘show the love’ for Ilhan Omar and Rashida Tlaib:

The UK is the main focus

Currently the UK is the main focus and the knowledge of who to target and who to share is scarily accurate. This is clearly a two-way relationship. How would someone in Gaza know to promote the Canary or Jewish Voice for Labour unless someone here was telling them? Put alongside other known connections such as Walid Abu Rouk and it begins to appear like a widescale coordinated Hamas campaign to help Jeremy Corbyn win the election – that receives information from the UK about who to target and who to promote. How would Hamas based propaganda outfits know to attack Joseph from the Israel Advocacy movement?

As if British Jews didn’t have enough problems already – now we are targeted by Hamas. When British Jewish activists post anything negative about Jeremy Corbyn we are instantly targeted. When pro-Corbyn accounts post something positive it gets quickly promoted and shared. Nothing is as it seems. Pro-Corbyn hashtags soon become trends – others see pro-Corbyn hashtags trending and are influenced. This is terrifying stuff. There is clearly a Dutch influence but the WhatsApp group contains the Gaza activists and it is all led by a man who runs the media control unit for an official outlet that is linked to Hamas. 60 accounts targeted a single tweet – almost all of them accounts created in the last 2 months- explicitly to fight in the UK general election. This is direct interference in UK elections by a radical Islamic terror group. In his hour of greatest need – Jeremy Corbyn’s friends seem to have come to his aid.