On 5th December, BBC Newsround published a page titled ‘Christmas trees from around the world.’ If the BBC take it down, the page is archived. It was published on their Newsround pages and is explicitly targeted at children. The item is intended to raise the Christmas spirit and brings images of impressive Christmas trees across the world. So far, so good.

Until you look at the page. I have a radar for anti-Israel activism and propaganda. To analyse articles and work out which ones are subtly twisted by a journalist who wants to weave their personal dislike of the Jewish state into the words on the page. On many occasions that bias is subtle and can even be expertly hidden. Rarely are these people caught with their trousers so firmly down around their ankles as with this particular BBC page. Outside of the world of a petty anti-Israel activist deliberately writing a piece of Palestinian propaganda fit for a Hamas PR unit – this BBC article makes absolutely no sense.

How many impressive Christmas trees are there in the world? The BBC webpage published 10 days ago managed to find seven. Just seven. The page hasn’t been updated since and there are still seven trees. The BBC found impressive trees in Vilnius, New York, Gaza, Prague, California, Ramallah, and Bethlehem.

Three trees in PA/Hamas areas. Three. This is not education – this is blatant propaganda. Even the Arab outlet ‘Gulf News’ wouldn’t publish such a piece. They found other images from Dortmund, Strasbourg and the Vatican – cities with Christmas trees that for whatever reason – the BBC just couldn’t find.

Christmas in the PA /Hamas areas

Whatever initial motivations may have been behind the page are captured in the 7 trees that have been listed. I think it is clear that whoever wrote it did not start without the ‘Palestinian’ trees already in the hand – and those trees gave them the idea for the piece. In other words, it was deliberately written as a propaganda piece – and probably wouldn’t have been written if it had no pro-Palestinian value. You don’t go looking for Christmas trees around the world and accidently find 43% of them in Gaza, Ramallah and Bethlehem. The world is too big for that.

They even disgracefully use the name of ‘Palestine’ as a location. This piece was penned by someone who used the BBC for anti-Israel activism: 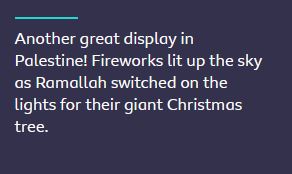 The article is spectacularly twisted. Christmas in Gaza? There are just 1000 Christians left in Gaza – if that. Christians have been hounded out of Gaza for decades. Permitting Christmas to be celebrated publicly in Gaza today is no more today than a PR stunt for a radical Islamic terrorist group. Just last year a flyer was handed out warning Christians not to celebrate Christmas. There used to be a Christmas tree set up in a central Gaza Square, but that hasn’t happened since Hamas took control. Now, it is just at the YMCA a celebration takes place, an up-scale and prosperous part of Gaza City. In 2008 the library of the YMCA was attacked and bombed – with the gunmen asking the security guards, why they worked for ‘infidels’.

YMCA Gaza have not updated their website in 9 months. They didn’t even upload a report on this Christmas event. In fact, there last post is a February 2019 upload about Christmas 2018.

How about the others? On April 25, the ‘terrified residents of the Christian village of Jifna near Ramallah asked the PA to protect them after they were attacked by Muslim gunmen‘. Three days later it was the turn of the Anglican church in the village of Aboud, west of Ramallah. No suspects have been arrested. Churches in Bethlehem has been subjected to several attacks in the last few years, including a 2015 arson attack that left one badly damaged.

The Christian population in Gaza and the WB used to count for about 10% of the population, now it is about 2%. Like in much of the ME, Christianity in Gaza and the WB has been under Islamist attack, sometimes violent, and it has virtually wiped the religion out. Open Doors, an organisation that reports on persecuted Christians, and publishes reports – writes of ‘Islamic persecution‘ of Christians in PA controlled areas. Open Doors highlights that converts to Christianity are particularly at risk. The organisation has called what is occurring to Christians in many parts of the world as ‘Genocide’.

The Arabs deliberately push Christmas out because of the propaganda value. It reaches the west and it enters churches – where the image of poor Christians persecuted by Israelis is the story they can tell. If not for this value – then outside of Bethlehem there would be no trees. In Gaza? Really? What next – in 2020 will the BBC tell the story of how ISIS does Christmas?

Newsround when it isn’t Christmas

I quickly went looking for more on Newsround. Take this basic history.

“After World War II and the Holocaust in which six million Jewish people were killed, more Jewish people wanted their own country. They were given a large part of Palestine, which they considered their traditional home but the Arabs who already lived there and in neighbouring countries felt that was unfair and didn’t accept the new country. “

How absolutely vile. This is the disgraceful propaganda the BBC are feeding our children. Sweetened up further with images of Christmas trees in Hamas territory. I could ask writes this stuff – but I don’t need to. The real question is how does it ever get published? It is obscene that Palestinians use the Christians they persecute as a propaganda weapon in an anti-Israel brainwashing campaign – but it is unforgivable the BBC become willing accomplices. But then such is the attitude of the west. Rather than stand by persecuted Christians, western Christian organisations side with Hamas, the very organisation persecuting fellow members of their faith.

Delete and move on

It took 10 seconds to find the Zocalo Christmas tree in Mexico City another 20 to find both the Floating Christmas tree in Rio de Janeiro and the Bee themed tree at Galeries Lafayette in Paris. There is no shortage of ‘festive firs’ as the BBC webpage describes them.  So why only seven? Because only three were important and they were already on the page. In reality the Bethlehem tree, because of its religious significance is the only one that should have been considered relevant.

It is the cleverest type of disinformation, because the person who complains looks like a troublemaker and at times even heartless. It is finely-tuned devastating propaganda. When it is Propaganda directed towards children there is justifiable reason to be angry. The image that this presents to the world is entirely false. It is fake news.  Put together by an anti-Israel propagandist. This stuff brainwashes children.

It is rare that such a raw example is found. Someone is responsible for this. It is no good just updating or removing the page. We can’t just delete and move on. There is evidence that a propagandist used the BBC to deliberately promote their own agenda. That person should be held to account. Paul Plunkett is the current editor of Newsround. Georgina Bowman is listed as a deputy editor. They’ll know who it was.

The BBC should be made to tell the tale of how such a blatant Hamas propaganda article ended up on its pages and ensure that whoever it was responsible, never writes for them again.