Nimbus is a $1.2 billion dollar project recently awarded to Google and Amazon. The Nimbus contract is about supplying cloud services to the Israeli government. The anti-Israel boycott movement, BDS, is fully aware that the entire tech industry is well outside of its reach. Israel is a world titan of tech and innovation and every single tech monster on the planet wants a piece of the pie. More than 250 non-Israeli companies have even set up R&D centres inside Israel. BDS may be able to persuade Ben and Jerries to do something stupid – mainly because an anti-Zionist extremist is currently its CEO. It can even dupe Sally Rooney into making a similar move – mainly because Ireland is neck deep in antisemitism anyway – but BDS knows – it knows – that Google, Microsoft, Amazon, Apple, Intel, IBM and co – are all firmly in Israel’s camp.

Which is why what happened with Project Nimbus and the Guardian cannot be put down to an editorial mistake.

Following the announcement of the Nimbus contract in May, the words ‘Israel’ and ‘Nimbus’ do not appear together anywhere of note on social media until 12th October 2021. What eventually brought this contract back to everyone’s attention was an op-ed letter printed in the Guardian newspaper – claiming to be from ‘hundreds’ of Amazon and Google workers, calling on their employer to break their strong ties with Israel: 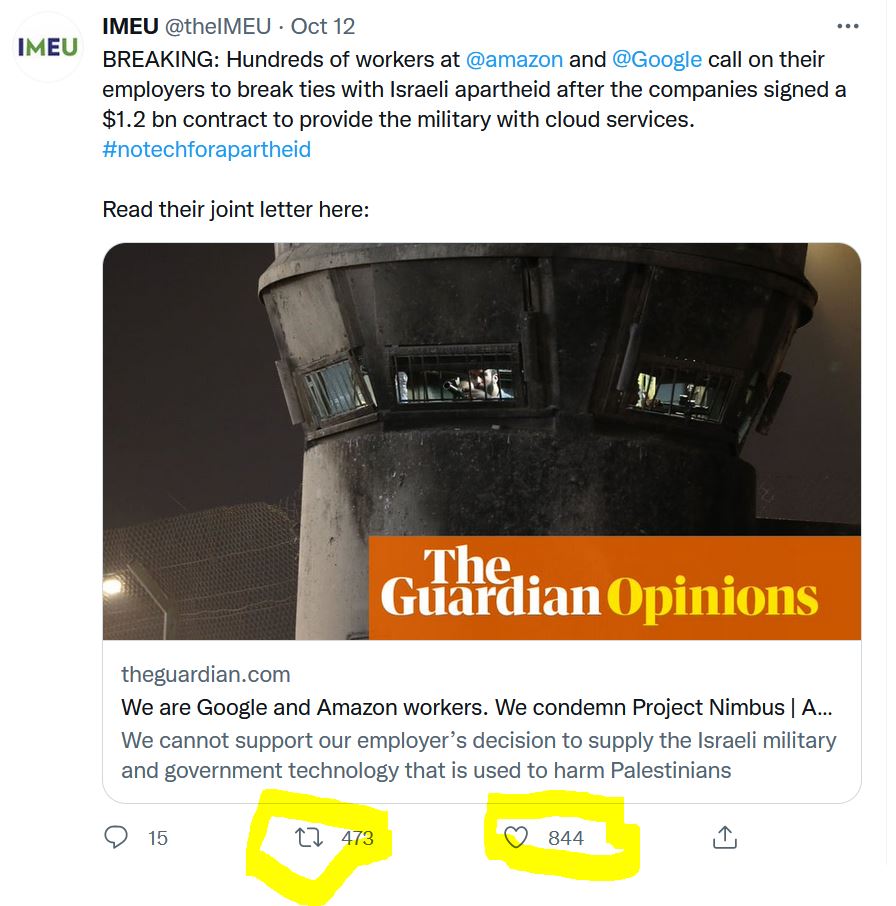 The story was bogus

As we now know, there is nothing ‘grassroots’ about the letter that the Guardian published – nor any newsworthy substance to it. Instead it was an astroturf propaganda stunt by the anti-Zionist extremists of ‘JVP’ and the just-as-toxic ‘MPower Change’ – Linda Sarsour’s group. Here is the timeline of the set-up:

The website was created in August. Yet the campaign and hashtag only appeared in mid-October. Only three workers, all known activists put their names to the campaign. One was a known Jewish anti-Zionist extremist who has previously called on the international community to ‘intervene’ – even in places such as Ramla, Lod and Haifa! Another known activst, Ariel Koren – is linked to JVP, one of the groups behind the stunt. The third seems to be a raging antisemite:

That’s it – three workers – out of over a million. Hardly newsworthy. And as the Israel Advocacy Movement’s video correctly points out – how is it possible that so many toxic BDS organisations such as the PSC in the UK – were ready to sign a letter – that had only just been formulated? The entire episode was clearly a coordinated propaganda stunt.  I am sure they will now get a few antisemites to sign the well-publicised letter – and then pretend they had the names all along.

The Palestinian faces of the Nimbus stunt

On the campaign website are the usual attempts to make the readers hearts break. What they do is list a few Palestinian names – five in all – and each one tells a tragic story. On the face of it these people do not look connected but I can reveal that this is just another part of the deception. Each of the people mentioned – Ahmad Abu Shammalh, Akram Abunahla, Israa Musaffer, Jan Amin and Baraah Qandeel are from the hard-core BDS propaganda group ‘we are not numbers‘ – which means every single one is an active BDS propagandist. Even worse – all five of these stories were only added to the ‘we are not numbers’ website on 10th October 2021- just two days before the Guardian letter was published.

The person who added all their stories to the site was their ‘mentor’ Catherine Baker from the Palestine Poster Archive. This proves that the whole thing was coordinated in preperation for the launch by players in the BDS movement. Catherine Baker just happens to work alongside groups like Mondoweiss and JVP – who ‘coincidentally’ rushed to promote the campaign.

All five of the faces mentioned may talk in a sweet voice – but the face behind the mask can sometimes be very different. Take Israa Musaffer – she is pushed by the campaign as an administrative assistant from Ramallah who wants to tell the world about Facebook censorship. She claims that her FB profile was deleted just because she had expressed her ‘personal experience’. How awful for her. 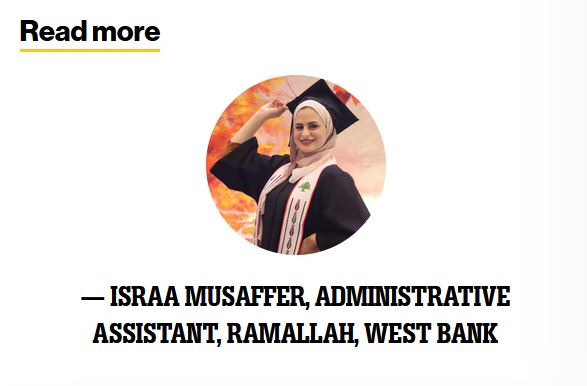 But we can publicly see some of her Facebook posts. On the recent anniversary of the second Intifada – an explosion of terror that led to over 1000 Israelis being slaughtered by terrorists – Musaffer made a celebratory post and linked to a SoundCloud account that glorifies terrorism:

When you access the SoundCloud account you become swamped with images of terrorists. Like this one – of Izz ad-Din al-Qassam, a Syrian terrorist operating in British Palestine during the 1930s – and whose name is now used for the armed wing of the Islamic Resistance Movement, Hamas. Is it possible that Facebook deleted her first account because she promotes radical Islamic terrorists? 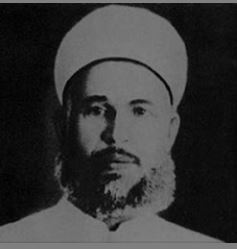 In any event – the real question remains – is this the campaign the Guardian is supporting?

Nimbus is not the first time.

We have seen such campaigns before. In 2018 – at the height of the Labour Party’s illegal harassment of British Jewish members, the Independent ran an open letter that falsely claimed lots of Jews proudly stood alongside Corbyn. After it was published I spent time researching the ‘groups’ who signed the letter. I found some groups had been invented just to sign, others had signed more than once – most were no more than one-man bands – and one group was even a fake Jewish group fronted by a Holocaust denier. The whole thing was a scam intended to provide support for the unsupportable at the height of its antisemitic behaviour. And the culprits behind that fake letter were JVP – the same toxic extremists who have pulled this latest stunt.

But to focus on the underhand strategies of JVP is to miss the point entirely. There are endless attempts by fringe groups, extremists and antisemites to spread disinformation. We saw the same strategies during the Corbyn years with the self-titled yevsektsiya group Jewish Voice for Labour. We are old hands at this. Everyone knows what JVL and JVP are.

The Guardian Nimbus affair – story of a hostile newspaper

Which is why attention must turn to the Guardian. They are the ones ‘responsible’ for taking yet another con and promoting it into the mainstream as if it were real. It was their action that did it. There is no way the Guardian could have verified this – so who at the Guardian chose to give it publicity? That is the question we should be asking.

There is no doubt that the Guardian is an Israel-hostile media outlet. By this I do not mean that they are just ‘unfriendly’ or contain a slight bias – when I say hostile – I mean hostile. A simple look at their website confirms this is true without much argument.  Look at the Guardian page for the ‘Palestinian territories’. During September and October they have run 15 separate stories. All of the key anti-Zionist messages are there – support for the boycott, the lie that Palestinian voices are supressed, support for prisoners in Israeli jails and a constant drumbeat about Israeli ‘brutality’. The page does not just ‘lean’ in the Palestinian direction – like any BDS outlet there is no dissenting voice allowed at all.

Over the last few weeks a corruption story has broken out in the PA areas. The Guardian couldn’t be bothered to tell its readers about it. There has been mass rioting by Palestinians in Jerusalem too – but this was also ignored. Hamas threatening Israel with war? – not good enough for the Guardian. Nor was Hamas passing out the death sentence to people they call ‘collaborators’.

There is no room for the Guardian to confuse its readers with conflicting messages. If it doesn’t demonise Israel with the beat of a BDS drumkit – it simply doesn’t make their pages.

The Guardian’s Israel pages are not much better. It is either empty archaeological fluff or demonisation. There is not a single story – not one – that counters or balances the constant political anti-Zionist message.

There are over 30 stories on these pages during September and October – almost all demonising Israel – and this is a time of relative quiet. Compare that to Pakistan – a serial abuser of human rights – they get just one negative story on their page. Even Iran doesn’t get treated as badly as Israel does. And it goes without saying that the Palestinians get far more attention from the Guardian – than the million or so Uyghur’s facing genocide.

So it is no surprise – none at all – to find out that the Guardian, via this Nimbus story – is actively spreading fake news about the Jewish state.

There are no doubts

There is a very simple way to prove this point beyond all argument. Over the last two months – as the Guardian was demonising Israel:

These are clearly three newsworthy stories. The only problem is that anti-Zionist media outlets only seek to demonise Israel – and these three stories present a positive face on Israel’s relations with the outside world. Unsurprisingly, none of these stories made it to the pages of the Guardian. Yet rather than report the speech of the British Foreign Minister, the Guardian found space for empty propaganda pieces from anti-Zionists such as Hanan Ashrawi and Khalil el-Halibi.

The Guardian Nimbus apology that will never come

The Guardian should apologise. It should say sorry for the fake Nimbus story – say sorry for demonising the only Jewish state in the world – and most of all – it should apologise to British Jews for the hostile position it has taken. Somehow though, I do not think the readers of the Guardian should hold their breath waiting for an apology to come.

It is past the point of making excuses. I have dealt with the Guardian’s bias before as it became stuck in the mud defending Corbyn’s antisemites (and another article on the issue). But the Labour party argument – which the Guardian proudly gave voice too – was bogus too – and Labour were found to have illegally harassed their Jewish members. We have given the Guardian far too much credit and way too much benefit of the doubt. The Guardian’s actions are nothing short of calculated, obsessive and deliberate.

It must now be recognised that the Guardian is not just a bad newspaper – or one that has a ‘slant’ – but rather one that will eagerly promote those that seek the destruction of Israel. This shouldn’t just be ignored – or dismissed – the Guardian’s poisonous obsession should be actively opposed.