The Guardian newspaper is on a mission. Over the last few days, it has published several ‘Jew-hostile’ news and opinion pieces. For example, two that attempted to discredit the EHRC (the statutory body that conducted the investigation into Labour’s antisemitism), and two more that set out to undermine the IHRA definition of antisemitism.

The criticism of the IHRA definition of antisemitism came first in the form of a letter signed by over 100 Arab ‘intellectual’ voices. Most are names are instantly recognisable as political anti-Israel activists. The other attack on the IHRA was an article written by David Feldman. Feldman is director of the Pears Institute for the Study of Antisemitism at Birkbeck, University of London.

David Feldman was rolled out because he is Jewish. Just as the Guardian loves to print anti-Israel letters from the Jewish modern Yevsektsiya groups. The haters learned long ago, that if you want to effectively attack Jews, make sure you pick up a Jew to do it with.

Feldman’s main positions are that the IHRA definition curtails free speech and that he believes in an ‘all lives matter’ approach to racism. As David Hirsh expertly points out, ‘the All Lives Matter‘ approach is far from helpful. Hirsh’s article is well worth a read and therefore I have no intention of covering all that ground here.

Another major problem with the ‘all racism matters’ approach is that whole strands of anti-Jewish racism today are coming from parts of the Muslim community and Black Lives matter activists. Jews are explicitly ‘othered’ by members of these groups and often cannot enter their spaces to discuss racism with them.

The right to free speech

Much of the Jewish community, along with the Government have been campaigning to pressure universities to adopt the IHRA definition.

The argument over the right to free speech is an important one. Frivolous accusations of antisemitism should be shouted down loudly. Calling someone an antisemite because they do not like the Likud or Israeli building in parts of Jerusalem is not antisemitism. But then the IHRA doesn’t say that it is. People who raise these sorts of arguments are deflecting.

Jewish people need defending – especially on campus. The main thrust of the opponents of the IHRA definition is coming from antisemites who want to continue to be antisemitic. They must be pushed back.

Sit down and shut up

My key problem with David Feldman is neither his error on free speech nor the ‘all racism matters argument’. Basically, I want to know where he was for two decades. The only thing I know about him fighting antisemitism is that he played a key role in legitimising the Chakrabarti whitewash.

On Corbyn he was silent. In fact he has been more or less silent for decades as antisemitism worked itself into the veins of the unions, universities and left-wing political spaces.

The *ONLY* people to whom I am going to listen on the IHRA and EHRC are those who fought the battle. David Feldman didn’t. He was one of those Jewish people who sat by and watched. As Jonathan Hoffman points out – he and the Institute are part of the problem.

He can sit down and shut up.

The shame of the left

Every problem we face has a cause. The reason there is so much opposition to the IHRA definition is because antisemitism has become so normalised. For decades, elements on the left turned a blind eye to the problem – and that included David Feldman. It was possible for people to wave a Hezbollah flag in the morning, go online to talk about Zionist control of the media, and then turn up in the afternoon to vote for a radical comrade in a local Labour constituency election. All this was going on and most of the experts on antisemitism just yawned or dined out in Westminster.

Churches and Unions opened their arms to the antisemitic Palestine Solidarity Campaign even though PSC directors and activists were spreading antisemitic conspiracy theories.

They are all so used to doing it, it has all become so normalised, they feel like we are asking for something abnormal.

As people come forward offering their advice on how to deal with the issues we face – it is both our right and our duty to ask them at least these four questions:

I cut off at March 2018 because that is when the earthquake happened. Palestine Live, then the Mural then the Parliament Square demo (in that order) – all in the space of three weeks. Speaking out on antisemitism *after* the earthquake occurred was a comfortable and easy option, even the mainstream media were on board. The real fighters were the ones who had been alone in the trenches for years. Where was David Feldman? Yawn.

Haroon Siddique and the EHRC

The attack on the EHRC came from two articles (1, 2) written by Haroon Siddique.

Haroon Siddique carries the title of Senior Reporter at the Guardian. Siddique has been at the Guardian for over a decade. I had a quick look at his Twitter feed, it is fairly active, Siddique has made over 5500 tweets. It is when searching through his tweets that it becomes quickly apparent Siddique has his pet subjects.

For example. He never tweeted about antisemitism in the Labour Party. The only tweets on the EHRC report have been to criticise it.

Nine of his tweets mention ‘Jews’ or ‘Jewish’. One was sports related, one criticised Israel, two dealt with both Muslim and Jewish sensibilities.  For whatever reason on two of the nine ocassions he felt the need to link Jewish people to violent extremism.

What is also interesting is that all his mentions of Jewish people stopped in 2014. When British Jews started complaining loudly in 2015, he went silent. He almost never tweeted out on Corbyn or Labour – and never in the context of antisemitism.

The bias and the bigotry

Things are very different when you look for the word ‘Muslim‘. Suddenly Siddique sees bigotry – but in the Conservative Party. 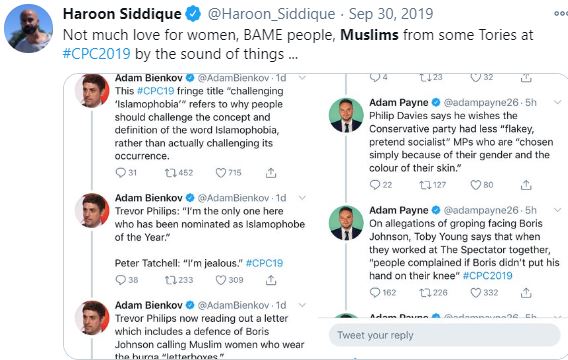 In fact there are dozens of tweets highlighting anti-Muslim bigotry. It is therefore fascinating that the only time he deals with anti-Jewish hatred, it is to belittle the report that details it.

I followed this up with a quick check to see how often Siddique mentions different nation states:

More than double on Israel than on any of the major global human rights abusers. Even ISIS only received about 25 mentions. What is also noticeable is that some of the Israel tweets come with personal sarcastic commentary:

And Siddique also takes the opportunity to share those that demonise the Jewish state. A share comparing Israel to Jimmy Saville written by notorious anti-Israel hater Ben White:

Haroon Siddique supports the Pakistani cricket team. Most of his Tweets on the serial human rights abuser Pakistan are cricket related. I searched for mentions of Balochi or Balochistan – to highlight the ‘epidemic‘ of human rights violations by Pakistan – and found no mention at all. One can only assume he was too busy tweeting about Gaza.

What of the Guardian

The Guardian is lost between antisemites and oblivion. The plain truth is this, for decades the Guardian has been a key part of the problem. Long before Camera UK was UK Media Watch, it was CIF (Comment is Free) Watch, which was set up because the Guardian’s comment pages were full of antisemitic hate.

The Guardian has been shown to be obsessively anti-Israel. By the early 2000s the Guardian was giving voice to antisemitic Islamists and the pre-Corbyn rantings of people like Seamus Milne.

It now has a serious problem. Much of its readership was brought up on an anti-western, antisemitic, Islamist friendly diet fed to it by – the Guardian. Over the last few years as the problems with Corbyn surfaced, the Guardian needed to face some of it down to maintain any mainstream credibility at all. But it riled its own hard-core support as it did so.

The Guardian finds itself caught between a rock and a hard place. It is choking on the very poison it helped spread for decades.

If some offer us advice on antisemitism – it is our right to question where they have been for the last twenty years. It is clear that the Guardian was helping to create the problem. Given all this we should have no interest in what they have to say – other than perhaps a very belated ‘sorry’ for all the antisemitism they have helped to spread.

161 thoughts on “The Guardian – lost between antisemites and oblivion”