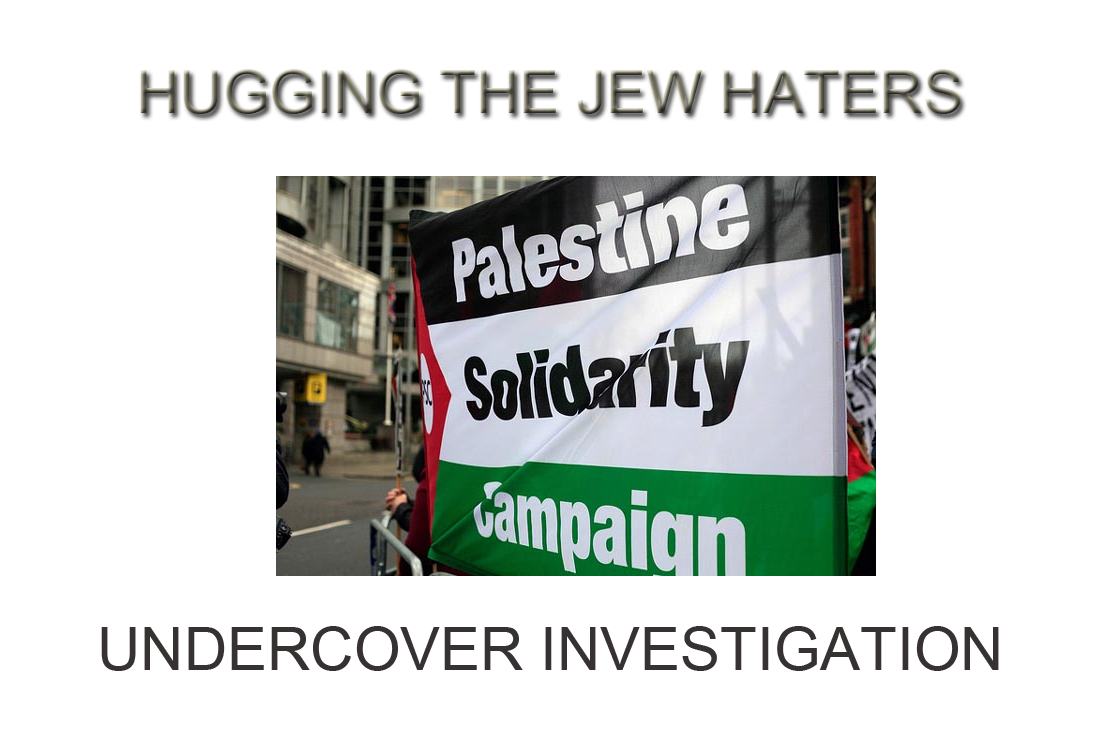 Hugging antisemitism and holocaust denial. Welcome to the PSC

I have just concluded an in-depth investigation into antisemitism inside The Palestine Solidarity Campaign that has spanned months but drew on several years of underlying research.  The Palestine Solidarity Campaign (PSC) claims to be “the biggest organisation in the UK dedicated to securing Palestinian human rights.”  The PSC patrons include: Jeremy Corbyn MP, Pat Gaffney, Rev Garth, Ken Loach, Dr Ilan Pappe, Hilary & Steven Rose,  Alexi Sayle, Baroness Tonge of Kew, and Betty Hunter.  It partners with many of the largest unions in the UK.

The result of this research is an eighty-page report, that focuses on seventeen separate PSC branches across England and Wales, and culminated with an in-depth case study of a mass demonstration in London. The full report can be downloaded at the bottom of this page.

In truth, I stopped the detailed analysis at seventeen branches simply because I was inundated with material.  Although not mentioned in the report, I also found ‘qualifying material’ at the PSC branches in Brighton, Faversham, Camden, Haringey, Lambeth, Waltham Forest, Liverpool, Manchester, Milton Keynes, Nottingham, Oxford, Plymouth & Portsmouth. As the researched progressed, finding more of the antisemitism at every branch became an exercise in pointing out the obvious. The question became to how to find a way to measure and quantify it.

When I refer to antisemitism within this study, I avoided *all references to the conflict*. We all know the trick is to deflect accusations of antisemitism with a false cry about criticism of Israeli policy. I set out to avoid this. I was only interested in those pushing conspiracy theory, holocaust denial or classic antisemitic tropes. The argument that antisemitism is about legitimate criticism of Israel simply has no weight against this research. The bar for antisemitism that was used is unnaturally high.  As an example, if the worst I found was an activist suggesting Israel should be destroyed, is committing genocide and Zionists are all Nazis, that activist *would not* have made the grade for this research. Let that fact sink in.

Below are pictures of the leader of the opposition, Jeremy Corbyn, next to a PSC activist. Meeting not once, but at least twice. Once inside a PSC event, the other at a Palestine Return Centre gathering. The man standing next to Corbyn posts a constant stream of ‘9/11 truth’, holocaust revisionism and other such vile messages. In UK anti-Israel activism he is a star, he was the central figure (if he is not still running) PSC Reading, is an admin for a major secret online anti-Israel group and just last month, attended the PSC AGM. The thing is, everyone knows about him, including the PSC.  PSC have known about him for years. When the PSC permit those like Tony to continue to associate with the organisation, the PSC spit in the face of all Jews and insult all those who seek to fight antisemitism.

This a quote from an article Tony Gratrex posted, one of the scores of such posts:

The Zionists’ militarist mindset is evidently motivated by the ethnocentric myths of Jewish victimhood. World-conquering Neocon-Zionist belligerence is driven in large part by the religious adherence to the official propaganda of the victors of World War II. Elite Jews played an important role in bringing about the Second World War as the final phase of their plan to establish the state of Israel. The First World War accomplished several things for the Zionists: it freed up Palestine from Ottoman control (the Ottomans previously rejected Zionist offers to purchase Palestine), it fractured the big empires of Europe who could then be manipulated into future conflicts, and lastly it delivered Russia to the Bolsheviks, a majority of whom were Jewish chauvinists hell-bent on the subjugation of that Christian Empire. With Russia now in the hands of Jewish communist extremists and Palestine falling under British dominion, the Zionist plan for Israel was well on its way.

But the research is full of such articles.  Having successfully found antisemitic posts in abundance, I attempted to quantify antisemitism (how much of the activity is driven by antisemitism). I focused on a single mass demonstration in London, the anti-Netanyahu demo on 6th February.   I was honestly shocked by the findings. Fifteen out of the thirty six accessible social media accounts identified, carried Jewish conspiracy style posts.  They suggest that the more likely someone is to pick up a Palestinian flag and call for people to boycott the Jewish state, the more likely it is that antisemitism is involved.  By the time someone is engaged with publicly protesting against Israel outside Downing Street, there is a good chance he is antisemitic.

There were many sickening moments during the research and it was emotionally draining to continue with this task day after day, week after week. To clarify, the correlation between activity and Jewish conspiracy was evident throughout the research, it was only at the demo was I able to quantify it. I had already seen numerous examples of people on the street, calling for the boycott of Israel, who believed in global conspiracy theory.

Watch this video post by a BDS action group:

That is Kajsa Anckarström.  These are some of her posts:

Another of her posts called Charlie Hebdo a ‘Zionist false flag’, and the top left post came immediately after the Paris terror attacks on November 13th. Now look at the video again. We have someone displaying deeply antisemitic attitudes, entering a shop and trying to persuade people to boycott products from the Jewish state. It looks and is horrific.

PSC will no doubt try to distance themselves from the activists in the report.  But in some cases it is the Chair of the branch, in others it is someone on the stall in the high street. On too many occasions it is someone clearly connected to the PSC.  What they should do is apologise. Apologise to Jews, apologise to their partners, and apologise to some members who have innocently aligned themselves to an organisation riddled with such antisemitic hatred.  Here for example is the PSC top table: 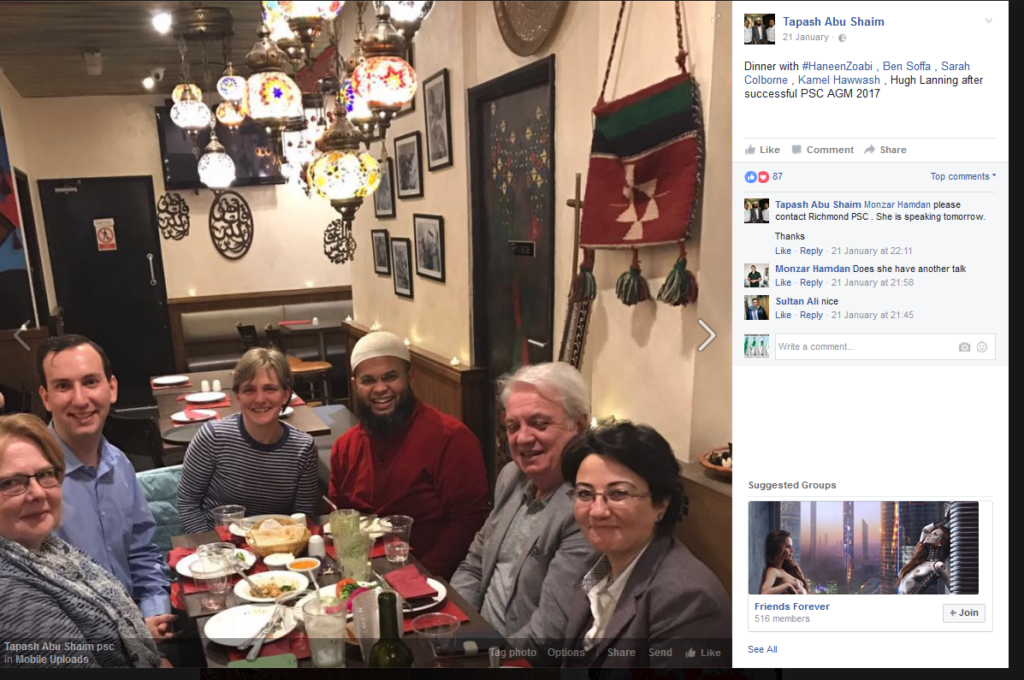 Sitting next to the ex-Director of the PSC Sarah Colborne and its current Chair Hugh Lanning, is Tabash Abu Shaim. Here he is on the street (far left) protesting against Israel.

He made many unacceptable posts, but this is a quote from one of the articles he linked to:

“It does a disservice to the Palestinians and non-Palestinian victims of Israeli foreign policy to try to divorce the Palestine Question from the broader manifestations of the locus of power which James Petras has referred to as the “Zionist Power Configuration” (ZPC). This ZPC operates at both a global and local level as was indicated on 9/11. As Naomi Klein accurately wrote in the Guardian “[the] Likudisation of the world [is] the real legacy of 9/11.”

Tapash appears to have been on the PSC stall at the Labour party conference. One inevitably has to conclude that antisemitic conspiracy theory is welcome at the top table of the movement.

Given the research found rabid antisemites, with a long history of Jew hatred, welcomed wherever they go within the PSC family, including into the HQ at the AGM, the PSC clearly only pay lip service to fighting racism within their ranks. They play a game which visibly laughs in the face of antisemitism, relying on a tiny minority of Jewish supporters to provide cover for blatant and rabid global conspiracy theory, holocaust denial and other antisemitic ideologies.

These findings should have repercussions as it brings into question all support that this group receives. The NUT alliance, the War on Want alliance, the other trade union alliances, the cooperation with elements of the Labour party, all these groups should rethink their policy towards activism that is clearly connected to rabid Jew hatred. The TUC is allied with the PSC, how is this acceptable?

All venues that host these groups and all Patrons of the PSC should surely sever their links.  Jeremy Corbyn is a Patron.  How is an association with a group that accommodates Holocaust revisionists and antisemitic conspiracy theorists acceptable to The Leader of the Opposition?

What does this message say about BDS activists?  The report shines light on people who apparently subscribe to dark antisemitic ideology shouting out in public about boycotting Jewish goods. This is not 1930’s Germany; there is no reason to accept such behaviour, regardless of the cause it attempts to hide behind. Download the report. Read it. Digest it. Act on it.

Please if you can, consider making a donation. I believe that attacking the lies and distortion for what they are is important. We need to be there to expose it. Mine is an dependent action and research is expensive and time consuming. Even producing just one of these piece does take days, sometimes weeks (like this one), and whilst I do what I can, there are serious constraints that impact on what is possible. Your assistance can and does make a difference. Every contribution is greatly appreciated.

70 thoughts on “Hugging antisemitism and holocaust denial. Welcome to the PSC”