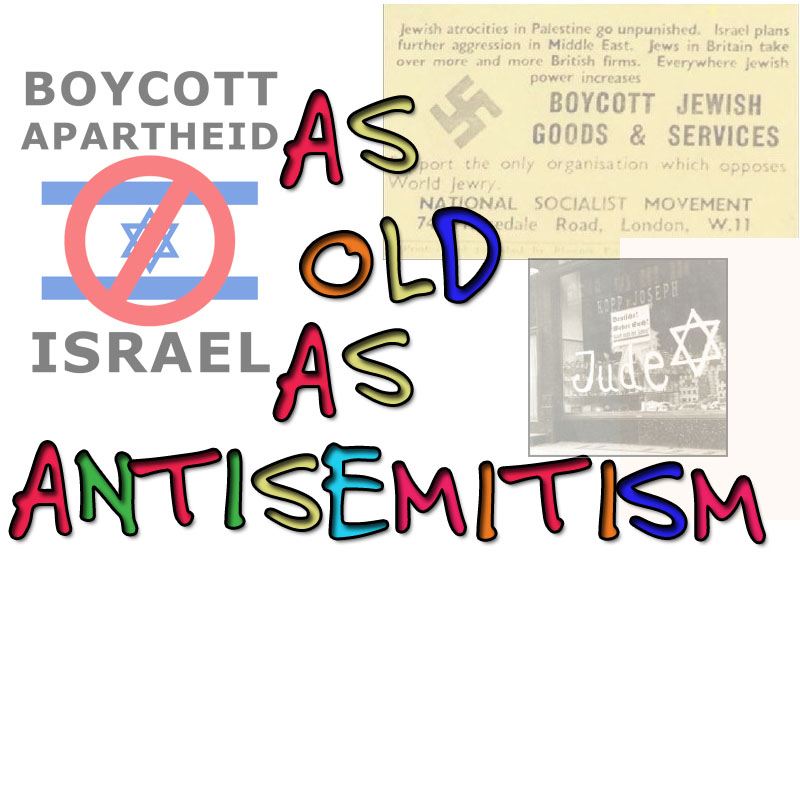 Boycotting Jews is nothing new. It is as old as antisemitism

Boycotting Jews is nothing new, and in order to protect the current mutation (the Boycott Divestment and Sanctions movement), antisemites are hiding behind a massive straw man argument about personal freedoms.

From persecution to boycotting

Outside of the Old Testament, early Jewish history is difficult to piece together. The earliest tribal leader that told his clan not to deal with the Hebrews is lost to history – as are his reasons for doing so. Things started to change drastically as European Empires took hold and the Jews spread out within them. It was the rise of Christianity that gave anti-Jewish persecution real continental teeth.

The ebb and flow of anti-Jewish measures continued for almost 2000 years. Jews were persecuted, massacred or expelled. Sometimes there would be a period of relative quiet, where Jews were lucky enough to be tolerated.

People had no voice, but it isn’t difficult to imagine that as a Jewish population faced major persecution, their persecutors were often also choosing not to engage in trade with them. And let’s face it – would you want to trade with the people who drank the blood of your children, killed god and spread the plague?

It is difficult to know how many Jews there would be in the world were it not for the lack of a place to call home. Some of the historical figures placed on early Jewish populations are clearly inflated and unreliable but the miracle of the Jews is that they survived at all.  Persistent persecution, forced conversions, expulsions and massacres kept ‘culling’ their population. But it didn’t just stop growth, it left the Jews a perpetual, fragile, wandering, minority group.

Even outside of the paradigm of a modern economy, anti-Jewish measures invariable fell into one of the three categories – boycott, divestment or sanctions.

Boycott – restrict the ability of the Jew to trade and be financially secure. Create a legal environment where they are limited in their choice of work, where to live and ability to provide for their families. Ostracise them. Banning Christians from working for Jews is an example of ancient, institutionalised boycott.

Divest – downsize the scope of dealings between your community and the Jews. The constantly changing laws around lending money frequently led to kings or landowners divesting from local Jewish communities. Back then this would often just be plain theft. As this was often done explicitly to cause hardship to Jewish communities – this is a clear divestment strategy.

Sanction – punish Jewish communities. This involved everything from forcing them to wear symbols of shame, to genocide or expulsion. There are 1000s of examples of severe and often brutal sanctions against Jews throughout history.

Boycott and divest to weaken a people and it becomes easy to expel or slaughter (sanction) them when they are powerless and defenceless.

As boycott is a weapon of the people, the first recognisable anti-Jewish boycotts arose in the 19th century as people finally found political power. The word ‘boycott’ even originates from this time, when in 1880 Charles Boycott, a Land Agent in Ireland attempted to evict tenants from land. Locals ostracised Boycott for his actions.

From this point on, anti-Jewish boycotts became a primary weapon of the antisemites. In 1882 at the first International Anti-Jewish Congress, they adopted a slogan against Jewish merchants and professionals. I imagine that is what ‘anti-Jewish congresses’ were for anyway.

Sometimes it was people rather than state. In Austria, the antisemitic slogan ‘don’t buy from the Jews‘ was declared illegal by the state, so the antisemites changed the slogan to ‘buy only from Christians‘.

Other times the antisemitism was state driven, such as when the Soviet’s developed a committee of Jewish Marxists (the Yevsektsiya) to attack the Jews. The Yevsektsiya, which was explicitly set up to destroy Jewish community life, used boycott as a key strategy.

From Jew to Zionist to Israel

It was not just Christian Europe. In the Muslim world, dhimmi status perpetuated second class citizenship, but there were peppered bouts of wide-scale anti-Jewish violence. These episodes became more frequent with the rise of Arab nationalism.

Communist, Christian, Nazi, Muslim. Each group shaped its own boycott, divestment and sanction strategy as a means of weakening and attacking the Jewish population.

Amidst the nationalist awakening, Jewish nationalism also rose, and this allowed anti-Jewish feeling to mutate again. Anti-Jewish boycotts that focused on ‘Zionism’ began to appear. One of the Yevsektsiya boycotts was against Zionist theatre and in 1922 the Arabs set up a boycott of Jewish business in the Palestine Mandate.

By 1945, the entire Arab League, a product of Arab nationalism, was singling out Jewish nationalism – Zionism – for boycott. At this point Israel still did not exist. The Arab boycott of 1945 uses the words ‘Jewish’ and ‘Zionist’ interchangeably. The Arabs created a ‘Permanent Boycott Committee’ in 1946, two years before there was an Israel to boycott. By 1951 the Arab states had opened boycott departments across the region. They prohibited all products made by Jews in Israel (boycott), applied a secondary boycott on funds and strategic commodities (divestment) and spent large amounts on arms in order to be able to punish the Jews for what they had done (sanction).

Boycotts against Jews are never isolated. They always accompany both divestment and sanction. It isn’t just about driving Jews to do what you want; Jews also need to be isolated, weakened and punished.

BDS is far from new

There is little new about today’s BDS movement. It is an antisemitic attack which makes up laws, that Jews are then accused of breaking. Just like Medieval Christians used to do. It provides the groundwork for the ‘necessary’ isolation and punishment.

BDS did mutate before finding the ‘perfect’ formula with which to dupe humanitarians in the west. Shortly before the Palestinians ‘called from within’, Jewish Marxists in the UK, like the Yevsektsiya before them, started a boycott of Zionist academia. It didn’t have the ethical legitimacy of those ‘persecuted’ crying out for help and stalled. Jewish Marxists in the UK told the Palestinians what was needed and shortly after the ‘call from within’ appeared. BDS as we know it today was formed.

The strawman goes like this: “Choosing to criticise or boycott nations is a fundamental right and an exercise of free speech.”

Following on from this of course – cracking down on BDS becomes an infringement of those fundamental rights. Major anti-Israel figures have spoken out on this and NGOs like Amnesty have also geared up for the fight. Time Magazine has just published an article promoting BDS. Time’s piece even links to a fake news article about progressive Jewish groups supporting the movement.

Unfortunately, elements of the political left are falling for this strawman and battle lines are being drawn in all the wrong places. Consider this statement:

– teachers have a right to sanction disruptive children in the classroom.

Well of course they do. But what if a racist teacher is either constantly picking only on the children who are black, treating them differently or over-reaching with the sanctions? Then the whole structure of the argument changes. Pointing out that *this* teacher is wrong and needs removing from her post isn’t a denial of the teacher’s freedoms, it is a protection of the children’s. The same is true with BDS.

Nobody is questioning the general right to boycott – we are pointing the finger specifically at BDS and making accusations solely about that movement. The general argument about rights is not applicable here.

This is made worse by the deliberate vagueness of the BDS movement. As boycotting settlement goods adheres to one of the three BDS goals, left-wing Zionists become reluctant to call it out for what it is. Part of their politics aligns with some of the goals of BDS and therefore they see aligning with BDS detractors as a defacto support of Israeli settlement policy. These people must be made to realise that standing up against an antisemitic movement that seeks the destruction of the state of Israel is the ethical thing to do.

The problems with BDS

Therefore, if the antisemitic discrimination inherent in BDS is to be challenged, some of the problems with BDS must be made clear:

Call ‘boycotting Jews’ out for what it is

BDS simply needs to be called out for what it is. This is not about free speech. You are not free to illegally discriminate. BDS is just another in a long line of antisemitic movements that chooses boycotting Jews as an initial way of weakening them. It has no place in unions, on campus or on our streets. The BDS movement should be treated as we would treat any of the antisemitic boycott movements from the last 2000 years. They should be shunned wherever they try to sell their hate.

237 thoughts on “Boycotting Jews is nothing new. It is as old as antisemitism”