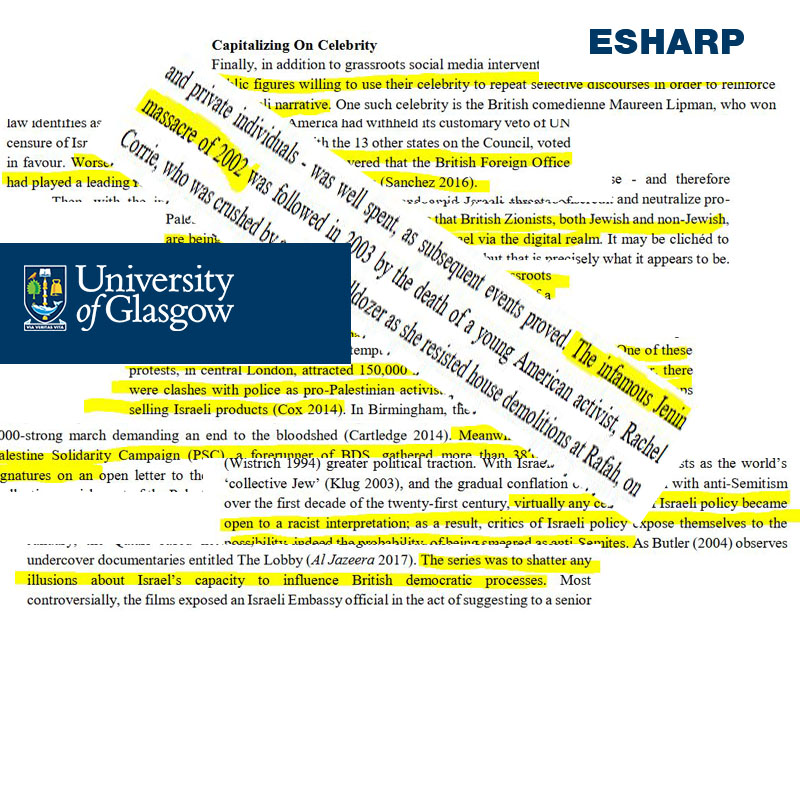 Glasgow University is ranked as a top UK university. The University is a member of the Russell Group. It runs a platform called esharp which is an ‘international online journal for postgraduate research.’ The University is very proud of the outlet. It states that all the paper are ‘double blind peer reviewed’. The university claims that the ‘rigorous and constructive process is designed to enhance the worth of postgraduate and postdoctoral work.’

A paper on the ‘Israel lobby’ appeared in issue 25 volume 1 (June 2017). It was written by Jane Jackman, an academic product of the universities of Durham and Exeter. There isn’t much to be found about Jackman online. She spoke at events in Exeter and SOAS and was an active member of the British Society for Middle Eastern Studies (BRISMES).  In 2017 Jackman was being supervised by Willaim Gallois at Exeter. Unsurprisingly, the conspiracy theorist and ‘liar’ Ilan Pappe was a co-supervisor.

There is almost no sign of public activity from Jackman on social media. There is an inactive Twitter account in her name, which only follows accounts linked to Israeli advocacy or the fight against antisemitism. Given her academic focus on the ‘Israel lobby’, it is a safe bet to assume it is hers. She did spend some considerable time commenting on blogs and articles, including mine.

Glasgow University and the Jackman paper

Jackman’s paper was titled ‘Advocating Occupation: Outsourcing Zionist Propaganda in the UK‘. The key thrust of the argument is that people like myself (I feature prominently) have been recruited by Israel to spread disinformation. I have studied the entire article. My key questions would be –

The paper isn’t just laden with conspiracy, antisemitism and errors – much of the time the reference material does not even support what the article is suggesting. The work is beyond shoddy. Jackman makes unsupportable outlandish statements, that are far more fitting for gutter press journalism such as the Independent than an academic journal. The paper frequently contradicts its own logic. This is in no way an academic piece of work. It should be hung on the walls at Glasgow university as a reminder of the shame that they ever allowed this to be published. The only justification for ‘peer reviewers’ to have accepted this piece is that they agreed with its content and wanted it published. The entire process is rife with heavy antisemitism. Who were the editors that sat around a table and accepted this submission?

The shame of Glasgow University

The paper is so bad and the errors so numerous, that it would need a book to address them all. I did not want to burden this blog with a long rebuttal, so I created a simple PDF that highlights *some* of the *academic* issues I found with this shoddy piece of work. You can download the PDF and see for yourself. However bad you think it could be – it is worse. Unforgivably, Jackman even refers to ‘the infamous Jenin massacre‘:

Any student of the conflict knows that there was no massacre in Jenin and the misreporting of the incident in 2002 swiftly brought shame to much of the British press. Which academic outlet in the world today supports the notion that there was a massacre in Jenin in 2002 and how is an outrageously unreferenced (unsupported) statement such as this acceptable in a peer reviewed article?

How is it possible that this was ‘peer reviewed’? Are the ‘peers’ all this unprofessional? The entire piece describes how British Jews are directed (and funded) by Israel to manipulate opinion and lie to the British public. How was antisemitic conspiracy ever published and uploaded on the Glasgow University website? Glasgow University – shame, shame, shame!

Glasgow University makes a great show of talking up the professionalism of their esharp platform. Which means this article is used to support antisemitic conspiracy in academic circles. The article has an ‘.ac.uk’ website address. It is available on ‘Google Scholar’. How is this not Glasgow University’s fault?

Once green-lighted by Glasgow University, the paper can be referenced by others who assume it has passed through some type of rigorous peer review. For example it appears as a reference in the International Education Journal: Comparative Perspectives Vol. 17, No. 1, 2018, pp. 7-2. In an paper written by Lou Dear, who ‘coincidentally’ has a PhD from Glasgow University. How is a Russell Group University awarding PhD’s to ‘academics’ that can read Jackman’s article and consider it worthy of reference. How?

The paper was presented at the BRISMES annual conference. BRISMES is the British Society for Middle Eastern Studies. The Vice-Chair is Nicola Pratt from Warwick University, an anti-Israel academic with whom readers of this research should be familiar. This is evidence of the enormity and dangers of the problem. Once you let unprofessional, sloppy, bias enter academia – other academics follow suit. Each climbing on the shoulder of the one before them. They create a network and spread out like a cancer. In the end, truth becomes lost.

A long road back

For so long we ignored what was happening on campus or casually dismissed it as irrelevant. We only woke up after antisemitism had become normative. It is astonishing that this type of antisemitic discourse was not immediately identified. If Jackman had been writing about any other minority group, this paper would have immediately been rejected as blatantly racist. Instead Jackman finds herself published in a postgraduate journal and proudly hosted on university websites. This is also our fault for being so passive for so long. It took the advent of Corbyn to wake most our community up and it is going to be a long struggle to reclaim the lost ground.

Please contact the Principal of Glasgow University Professor Sir Anton Muscatelli  (principal@glasgow.ac.uk). Ask him how the University ever felt this paper was worthy of academic publication. Make sure you attach the PDF.

If you are not satisfied with his response you should contact the Scottish Ombudsman.

I battle back against those who seek to revise history and I fight to expose antisemitism.  If you can, please consider making a donation.