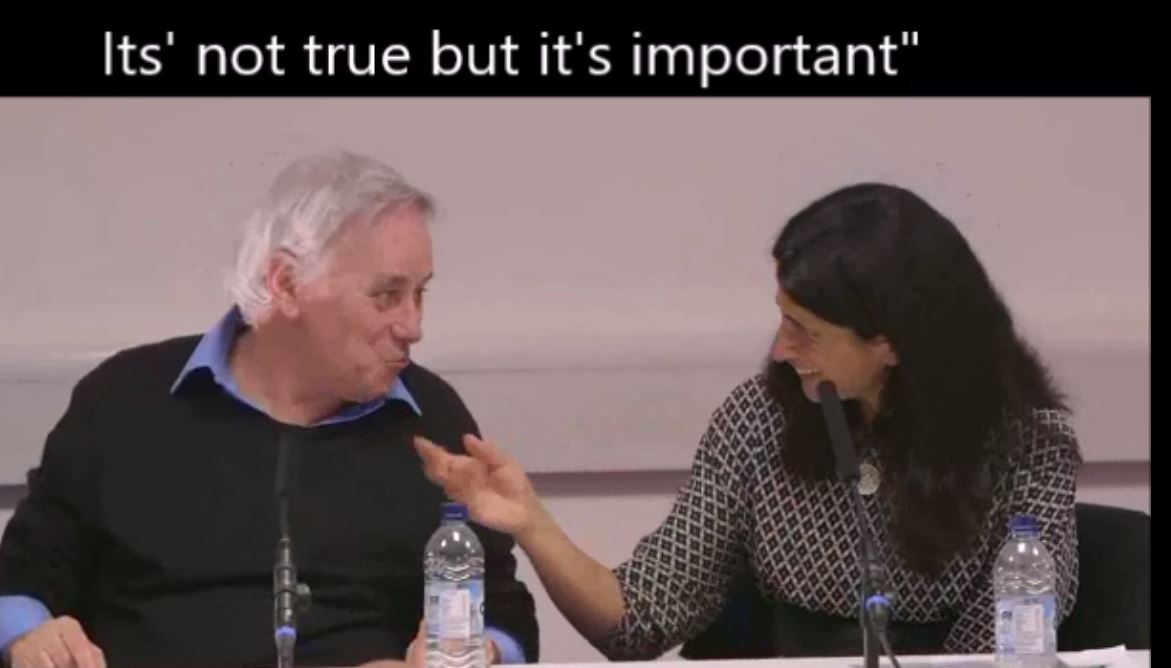 Ilan Pappe is the head of a department of a UK University. Below is a video apparently signaling Pappe believes it is ‘important’ to push a line for the ‘historical record’, even if it is not ‘the truth’. What is scary is that his cause and the subjects he teaches are intimately related. How can the university not address this? In the video Pappe also seems to indicate that the BDS call did not come from within.

What does this crucial revelation do to the central pillar of the BDS movement?

Although the Arab boycott against the Jews preceded the state of Israel, it was always limited in scope. The extreme left wing international activists only began to view boycott as a viable tactic following the successful boycott of South Africa. For the top strategists in the anti-Israel camp, replicating South Africa became the central aim.

So from 2002, we began to see academic and cultural boycotts arising from radical left wing groups. Here too they failed to gain momentum. As the main victims of such a boycott would be the Arabs themselves, it would be almost impossible to gain ethical support from amidst the humanitarian organisations.

Noam Chomsky speaking in 2004 said this as the boycotts faltered:

This statement was made incredibly (coincidentally?) just 12 months before the ‘Palestinian call for ‘BDS’.

What concerns activists is what we witness on the street. A combination of choreographed efforts that allow antisemitic thugs to express themselves on campus under a flag of humanitarian concern. But a major part of the delegitimisation campaign is occurring in academia. It is here the theoretical ethical battle is being fought. Putting aside what you believe of the conflict itself, Chomsky in 2004 had exposed a major weakness of any call to boycott.

Israelis were never going to call to boycott Israel, but for those advocating a one state solution, the ethical problem could be restructured by including the Arab population of the 67 lands in the calculation. If residents of Ramallah, Jericho and Hebron call for boycott, then it becomes theoretically possible to claim the situation is similar to the requested ANC boycott of South Africa. For those wishing to draw parallels, this became a neccessity.

However, the equivalent of the ANC inside the PA areas, would be the PA, and they were not going to support a boycott either.  How then to circumvent the issue? To bring about the required request from within, so as to provide the ethical pillar of support for a boycott.

In essence, this is union of communists, antisemitic thugs and Islamic radicals. Strategically plotting to bring about the downfall of the world’s only Jewish state. I have little doubt Illan Pappe was involved. He is a master strategist and he has been at the forefront of the struggle against Israel for decades. Whatever was taking place late in 2004 after Chomsky highlighted the ethical weakness of the boycott, Pappe would have been there.

Ilan Pappe talks about BDS at every single lecture. This is the type of thing he says.

“It (BDS) began as a call from within the civil society under occupation, endorsed by other Palestinian groups, and translated into individual and collective actions worldwide.”

Do not underestimate the importance of this claim. The call has to come from within. It is of VITAL significance. In an event at the University of Kent, I was told by a speaker from War on Want, that boycotting was only legitimate because “the Palestinians had asked us to”. Put aside all the other reasons to reject the boycott, as the major casualties from any such boycott would be weaker members of Palestinian society, for any humanitarian organisation to align with it, they would have to be absolutely convinced the call was genuine.

We now know it wasn’t.

Many people have long surmised that external activists told several groups of Palestinians what they needed. Then civil groups, some only made up of a couple of members, effectively sided with Hamas. They signed on the dotted line and BDS was born. The tail effectively wagging the dog. Whilst this has long been assumed, the evidence did not exist. Now it does. Watch the video. Bookmark it.

Having seen Pappe on many occasions, I know he holds the Palestinian ability to self-lead in total disdain. A typical self-righteous elitist. There is never a speech when he does not let his ego run away with him as he criticises them. As can be seen from the snippet in the video, he ‘begs’ them to lead. When Salah makes the comment about the Palestinian call for BDS, Pappe cannot resist. The exchange is stunning.

Pappe then clearly wants to change the subject

Pappe the activist, who at every single opportunity promotes BDS by suggesting that BDS began as a call from within civil society, now claims that is not true.  He also acknowledges that for ‘historical records’, it is important that people believe differently.

This conflict exists because if you remove the ethical underpinning of that boycott, the entire movement collapses. How can a humanitarian organisation side with a boycott that is put together by a few radical extremists and actually hurts the weaker members of civil society?

Ilan Pappe would have been there at the time BDS was put together. So when we have Pappe clearly indicating a problem with the historical record we have to sit up and take note. What Pappe seems to be suggesting is that the Palestinians did not call for boycott, but rather were told to call for boycott. We can also see from the reaction by Salah, that the bog standard academic Palestinian activist is unaware of this deception.  So whenever you see the suggestion that “The Palestinians called for Boycott”, you know now that is not true. Even on the edge of the far left, in the halls of the liberal humanitarian organisations, the very pillar of BDS has just fallen apart.

And let’s not forget, the head of a department of a UK university seems to have just suggested, it is okay to distort the historical truth if it suits your agenda.

15 thoughts on “Ilan Pappe destroys BDS, claims its central pillar is not true”