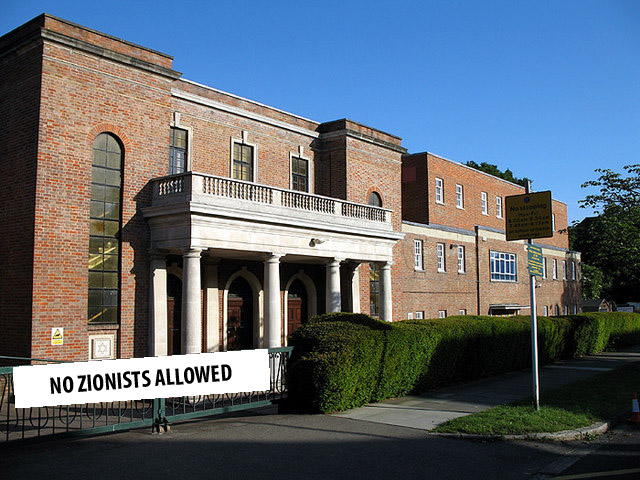 HGSS, Jewish News and Yachad, shutting the mouths of the London Zionists 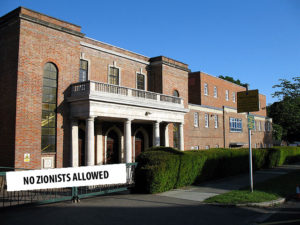 A Jewish newspaper in the UK smears a Zionist movement in a badly researched hatchet job, a London synagogue bows down to pressure and cancels a Zionist event. A scene from an antisemitic horror movie? No, this is the actual state of affairs of Jewish London in 2016. Read on for a Beyond the Great Divide exclusive:

Questions now need to be asked about just where British Jewry is heading. Are the ‘red fascists’ taking hold in our community?

Over the last few months, I have received several invitations from grassroots activist group ‘Campaign 4 Truth‘. Some of the speakers have been impressive. ‘Campaign 4 Truth’ are unashamedly Zionist.  I only wish more of our established Jewish community bodies could take a page from some of the grassroots groups and proudly wave the Israeli flag.

One of the more recent invites was for an event with an Israeli organisation called ‘Im Tirtzu’ that was due to take place on September 11th. It was scheduled to be held at HGSS, the ‘orthodox’ ‘United’ Hampstead Garden Suburb Synagogue.

Like many of the groups currently campaigning against the delegitimisation of Israel, ‘Im Tirtzu’ are not without their critics. Just a few months ago, a horrendous name and shame campaign backfired badly, and brought criticism against ‘Im Tirtzu’ from across the political spectrum. The main focus of ‘Im Tirtzu’s’ campaigns are the NGO’s that sit to the very left of the Israeli political spectrum. Groups that are now under the microscope, such as B’tselem, Breaking the Silence and more importantly the donors that enable the activities of these groups. In the opening paragraph on the Wiki page for ‘Im Tirtzu’, it says this:

“Im Tirtzu is mostly known for its campaign against the New Israel Fund, foreign government-funded NGOs, and alleged bias in university curriculum”.

No surprise then that the Chief Executive of the New Israel Fund, Adam Ognall, appears to be a primary source for the article in the Jewish News.

On August 11th 2016, Jewish News ran what can only be described as a hatchet job of an article. It was titled “Controversial Zionist group leader’s UK visit criticised”. Indeed, the paper went on to suggest the group’s intended visit, has been met by a ‘wave of criticism from Jewish groups in the UK.’ This ‘wave of criticism’, as far as can be gauged in the report, comes from the natural political enemies of ‘Im Tirtzu’, the New Israel Fund and the self-titled ‘peace group’, Yachad.

The Jewish News article throws the word ‘fascist’ about a lot. The source of this ‘fascist’ claim was a court hearing a couple of years ago, where ‘Im Tirtzu’ attempted to bring a libel case against political rivals. The entire case was eventually thrown out on appeal. Interestingly, it seems as if both Adam of the New Israel Fund and Hannah from Yachad were too busy drooling over the use of the word ‘fascist’ to actually read the court findings. If they had, they would have read that the judge in question, Raphael Yaakobi, might just as well have been talking to both of them when he said this:

“in order to ensure a healthy exchange of ideas, it is preferable to allow discourse between embittered political rivals to proceed with the ”least possible restrictions or sanctions”.

It is somewhat ironic that the two naysayers behind the Jewish News article should have relied on the decision in that particular case to try to push the argument for denying their political opponents a platform. This is precisely the reverse of the intended message delivered by that judge. It is only to be expected though. Don’t ever expect proper research to surface where cheap and nasty political points can be scored.

Shutting down the Zionist voice

The central message of the article published on the 11th (and reproduced in print form in the weekly Friday edition) was that Jewish groups in the UK should not accommodate ‘Im Tirtzu’. This from Hannah Weisfeld:

Now, regardless of whether or not I agree with the position of ‘Im Tirtzu’, for as long as they stay within the law, their voice has every right to be heard. As a perfectly legitimate Zionist position inside Israel, I hardly think it credible that Jewish organisations within the UK, should deny the people inside their community the whole spectrum of opinions available. That this statement is coming from the political enemies of ‘Im Tirtzu’, makes it an incredibly transparent and cheap political trick. That it comes from a group sitting on the very fringes of Israeli politics makes the entire episode border on the absurd.

Hannah’s use of the word ‘dangerous’ to describe ‘Im Tirtzu’ is simply ludicrous. I am surprised Jewish News fell for it. I hope it was an error caused only through naivety. Let’s not put aside the hypocrisy here. When writing in Haaretz in January about opposition to a Yachad event in Manchester. This is what Hannah wrote:

“people were encouraged to complain to the synagogue to try and force them to cancel it. Despite the intense pressure the synagogue executive and rabbi came under, in the end, commitment to free speech won out.  No chairs were thrown in Manchester, and no protests were held outside and the event was able to go ahead. But had those bombarding the synagogue with email and letters of complaint got their way, the impact of their behavior would have been exactly the same as that of the protesting students in London. The tactics and rationale might have been different but ultimately they share a common aim: to silence the voices of those with whom they do not agree.”

Isn’t it amazing how quickly the core values of these people disappear when it doesn’t suit.

The story is not yet over. For up to the publication of the article, the event was still scheduled to go ahead at HGSS. It seems however, that pressure was now being applied behind closed doors, because at some point the venue, the orthodox synagogue, declared that it was not an event fitting for the venue.

My primary question to them would be this: If an orthodox Synagogue in London is not the place to hear vibrant discussions on the conflict in Israel, then where is?

When I was told this story, it actually took a while to digest. This isn’t Ben White or Illan Pappe setting their clones on some theatre in Edinburgh to silence the Zionist voice, this is a Jewish newspaper and a Synagogue in London suggesting that Zionism isn’t welcome in the London Jewish community.

Am I wrong? For my second question to HGSS is this. Am I welcome at your Synagogue? Can I come? If I am allowed in, can I talk to people there about the conflict? Am I allowed to speak? I am a flag waving Zionist. Can you explain to me exactly what political position ‘Im Tirtzu’ stand for that left them outside of the walls of your Jewish hospitality?

Apparently, the synagogue suggested they did not want to take sides.  Take sides between who? Yet if you return to the event schedule above, you will notice that Yachad are holding an event on 5th September at the same synagogue. Open debate and the provision of a platform are not a one way street. Why are ‘Im Tirtzu’ denied but Yachad allowed? I can assure you, Yachad are deeply controversial in our community. Did the apparent presence of the Yachad chairman on the board of management at HGSS make a difference?

My political position is supported by the majority of Israelis. I will not sit quietly whilst cowards, bullies and naive astroturf suppliers manipulate the Jewish community into believing blue and white are tainted colours. I will wave the Israeli flag and I will not be silenced.  This synagogue needs to be challenged by its members to understand *on what grounds exactly* was the Zionist voice silenced. This is a disease that must not be allowed to spread. If you belong to this synagogue. Ask them!

‘Im Tirtzu’ are still coming, a new venue has been arranged and tickets can be purchased here. I will be there to listen. What they have to say is normally far more relevant, far more important and far more factual, than anything you will ever hear from a Yachad puppet or their puppet masters at the New Israel Fund.

58 thoughts on “HGSS, Jewish News and Yachad, shutting the mouths of the London Zionists”