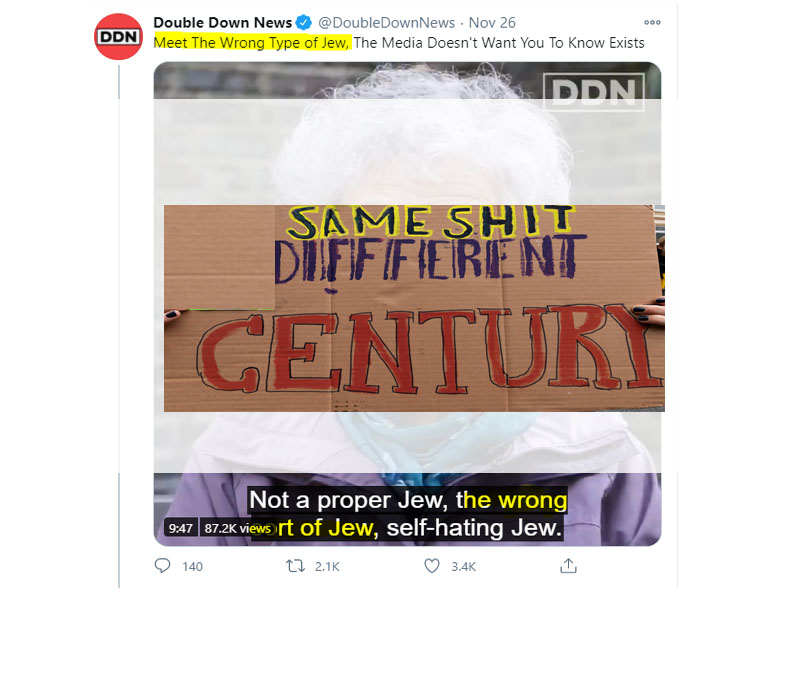 I want to start with an exercise. Google the phrase ‘the wrong sort of Jew‘ (you can repeat the test replacing the word ‘sort’ with ‘kind‘ or ‘type‘.)

Scanning the results from the first few pages, one thing becomes absolutely clear – this phrase is exclusively reserved for a hard-left attack against mainstream Jewry. In all of the examples on the pages there is a clear message; that any Jews who stick up for the Palestinians are silenced as the ‘wrong sort of Jews’ and the ‘media’ do not want you to hear these voices. This is one of the ‘fake news’ tricks that is often pushed by conspiracy websites. An offer to hear a truth that the powers that be want to hide from you. It is clearly a conspiracy theory.

Last week one tweet by ‘Double Down News’ was shared 2000 times and received 3400 likes. It was an upload of a 9-minute video of Naomi Wimborne-Idrissi from Jewish Voice for Labour. On YouTube, the same video was watched over 120,000 times in 4 days.

Above the video ‘Double Down News‘ used the headline -‘Meet the Wrong Type of Jew, The Media Doesn’t Want You To Know Exists‘. Putting aside the fact that Idrissi and all of her JVL buddies have been given more than their fair share of mainstream media platforms, the underlying accusation here is stark. Zionists control the media. Why else would anti-Zionists not be given a platform? In other words, this is an antisemitic conspiracy theory.

The recent video even starts with Wimborne Idrissi saying she has been called the wrong sort of Jew. Except nowhere in any of the google searches was there any indication Idrissi and co regularly face such an accusation. All of the ‘wrong sort of Jew’ results were of Jews on hard-left websites batting away at an accusation that does not really exist.

They built the straw man and are now busy playing victims as they publicly demolish it.

The video by ‘the wrong sort of Jew.’

In just nine minutes, Naomi Wimborne Idrissi takes the viewer through most of the rancid arguments we have come to recognise in the fight against antisemitism. The pillars of hard-left antisemitic – anti-Zionist discourse.

A vile cocktail of lies and distortion.

But despite the blatant propaganda in the video, it is the antisemitic conspiracy theory that does the most damage:

This message strongly suggests that mainstream press have no legitimate reason to choose not to continually give these people a voice. Which clearly makes this a conspiracy to unfairly silence them.

Which leads to the obvious conclusion which is a total inversion of the truth. Zionists become the antisemites. Those attacking the Jewish mainstream become the victims.

Attacks on Jews can now be carried out under the perverse umbrella of ‘fighting antisemitism’. So when I raise my voice in opposition – I become the ‘white man’ who is attacking the Jew:

Nobody should underestimate how dangerous this type of conspiratorial thinking can become.

The wrong sort of Jew. What an awful thing to say. Middle East Eye used it as a headline in September. Another well known Jewish anti-Zionist Robert Cohen, used it in 2017.

This isn’t about their Jewish identity at all. Because they represent such a fringe opinion amongst the Jewish voice – it would be a distortion of the truth to use them. They would be of no use at all beyond a propaganda tool to twist the truth. Which is why the hard-left love them so much.

Very few Jewish people walk down the road of ‘who is a Jew’. Most Jewish families have members who have married out – even more that enjoy a bite of bacon. Our cousins span the Zionist spectrum. Because of their small number – not many of us have actual anti-Zionist members, but we know they exist. On all religious matters, we are all full of our own personal contradictions.

Every person I have ever met who uses this phrase, ‘wrong sort of Jew’ comes from one fringe group who are using it to complain they are not being given a loud enough voice. It is a deliberate strategy used to confuse outsiders and render the Jewish mainstream voiceless.

Why it is so toxic

After watching the video, if I didn’t know any better, I’d feel sorry for Naomi Wimborne-Idrissi too. Which is the entire point of the video. Feel sorry for Naomi and grow to hate those that oppose her – the 93%+ of Jews. But JVL and the anti-Zionist Jews who push this antisemitic conspiracy theory know the truth. These outliers are fully aware they do not represent anything but a tiny fringe. Almost every one of these people is an outsider even in their own family.

The strategy is toxic. If, people such as Naomi W-Idrissi know the truth, then the motivation is clear. It is to create an illusion and silence the voice of British Jewry. Over 93% of us disagree with her – but she is demanding that each time the majority is heard – the viewer must also be fed a pack of lies by hard-left Jews so that the general population would be left not knowing what the truth is. What better way of making us vulnerable than to silence out our cries.

Jews of the radical left are not new. Because there will always be some Jewish people to support a cause, it becomes possible for any propaganda outlet to deploy some Jews for the same purpose. Want to ban circumcision? ‘Jews against circumcision’ will be there to help.

The Communist Yevsektsiya were a group set up by the Russians shortly after the revolution. Their struggle was against Judaism and Zionism. The Yevsektsiya was explicitly set up so that the Communist actions against the Jews could deflect accusations of antisemitism. That is identical to the core purpose of JVL. There is nothing new under the sun.

As the Yevsektsiya were part of the ruling party apparatus, it was not long before they began to dismantle Jewish community organisations throughout Russia. Their being Jewish does not protect them from a clear and justifiable accusation of antisemitism.

JVL and company are not the wrong sort of Jews. These people are denied a platform because their voices are fringe, dangerous and they set out to deceive. They enable and empower antisemites. Just like they did with this latest video.

Can you help to support our fight?