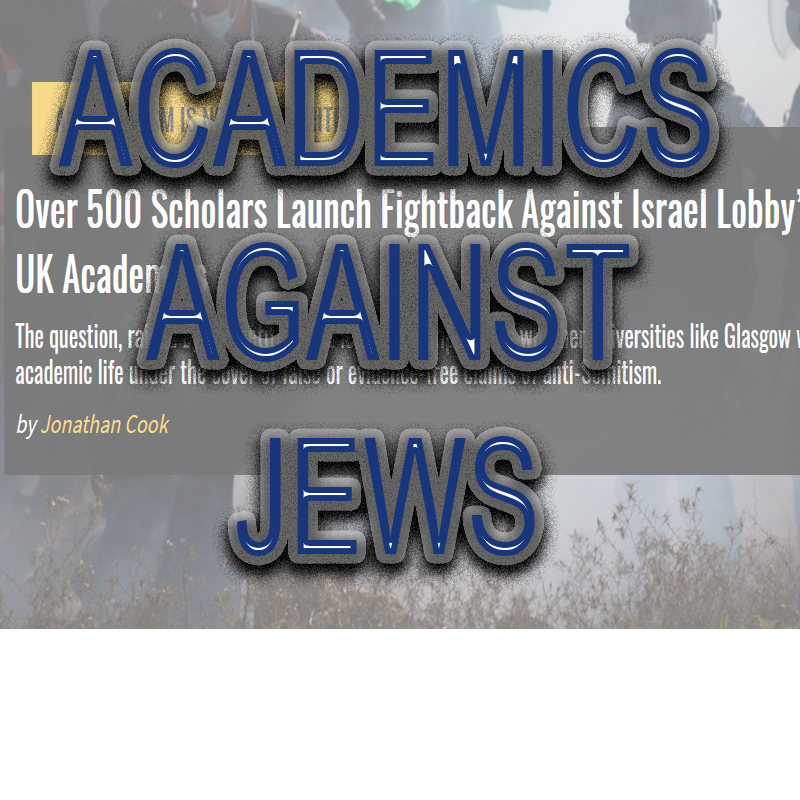 Academics against Jews – another shameful story

The ultimate purpose of peer review is to maintain integrity and standards in academic research. It is therefore a policing exercise. Academic research that has undergone peer review is considered to be validated and can be published in respected academic journals and spread around as ‘science’.  Wikipedia, other academics, journalists, and students build from these journals safe in the knowledge that the peer review system is working.

But what if it isn’t? What then? No politician will go near the minefield that is called ‘academic freedom’ – and anyone that even scratches at this basic premise is looked at in horror. Yet academia polices itself. It is the guard and the judge of all things contained within. And everyone avoids the most basic of questions – what if something is rotten inside?

Where there is power – there is abuse. And no institution – not even under the umbrella of academia – should be beyond the scope of external criticism, review and ultimately, if found wanting, be held to account. Quis custodiet ipsos custodes?

Glasgow resurfaces as academics fight back

Glasgow University has just become the target for a large group of toxic academics. Over 500 ‘scholars’ (and I use the word loosely) have just signed a petition attacking the university for *apologising* over an antisemitic article that was published in a peer review journal on the Glasgow University website. They are not angry that the university published a paper full of errors and anti-Jewish conspiracy, but rather because the university apologised for doing so.

I know all about this ‘academic paper’ because I was the one that put it through a proper review, reported my findings, and after the university had a chance to look at the matter more thoroughly, they did the right thing and apologised. The paper in question was a sewer article, littered with errors, substandard scholarship and full of antisemitic conspiracy. The only question *ANY* decent academic should be asking – is how this article was ever peer-reviewed and published.

The petition claims that because the subject of the peer-reviewed article was ‘advocacy for Israel’ it was attacked with false claims of antisemitism. This pillar – upon which BRICUP just launched their petition, is unquestionably false. The error laden article promoted antisemitic conspiracy – which is why it was antisemitic. None of this has anything to do with advocacy for Israel.

All the usual names have signed the petition. Ilan Pappe, Nicola Pratt, Hilary Rose, Ronit Lentin, Ken Loach and so on. We know who signs these things.

The petition is 425 words long. It mentions peer-review four times. See how it works? They use the peer-review system as a sign of legitimacy. There are enough toxic academics inside the system to push through any anti-Jewish racist material as ‘peer-reviewed’ – and here we catch them trying to rely on the credibility of the system that permitted them to do it. That this article was published is all the proof anyone needs that the system is rotten – and the fact these academics try to rely on it – shows how easily the process is abused.  This whole story is simply a horrific indictment of our academic system.

Why aren’t other academics rising up in fury about this because it damages the credibility of all of them? Where the hell are they? Too few care as long as nobody interferes with them, so they are more likely to side with the antisemites who want their freedom – than the Jews being abused. This is how academia is being destroyed from within.

The poison is everywhere

When David Miller gets sacked over antisemitism – they speak out in anger. When the IHRA definition is adopted in order to ease identification of antisemitic discourse, they protest or create counter-definitions to undermine it, and when Glasgow University apologises for an antisemitic article – they rise up in horror.

There are academics that just want to be able to spread antisemitism without ever having to be held accountable. They create their own journals and organisations to legitimise themselves and have even developed their own antisemitic ‘scientific’ niche – that is perversely subsidised by British tax-funded academic institutions. Tragically there are thousands of these activist academics on campuses. How do we know there are thousands? Because they keep signing these petitions.

Not a new problem

The problem is not what is happening today, nor is the root cause of the horror with which some academics are viewing the adoption of the IHRA definition a modern affair. For several decades a cancer has been allowed to spread in our universities unopposed. These academics built a palace for themselves inside and have hidden behind the defensive wall called ‘academic freedom’ – allowing every discriminatory, abusive, and twisted antisemitic ideology to grow unhampered. The current position is so skewed, and so damaged, that it requires drastic measures to even attempt to unravel decades of systemic abuse.

Consider this. A Professor of History is on camera admitting that it is sometimes important, for political reasons, to lie about historical events. And he teaches on the very subject that he made that admission about. How is this different from a Doctor admitting that sometimes he deliberately gives the wrong medicine to his patients? Yet in academia – nobody even blinks. Ilan Pappe is protected behind a wall called ‘academic freedom’. This man is an activist who lies for his cause – this deserves no respect or legitimacy.

This deserves no freedom

Funding from abroad – including Islamist funding – has created pockets of extremism, in which students are shaped to further the politics of the Islamist funders. This has nothing to do with science.  Nor does the infiltration of academia by hard-left political activists who abuse their position, deliberately shutting out alternative voices and pushing their own extremist politics onto their students as facts. ‘Critical thinking’ is allowed, but only within the confines of the carefully selected and biased reading material that the academic has listed on the module program. That process – which is occurring on almost every campus in the west – isn’t ‘science’ either.

A quick example. At the University of Exeter, there is a module ‘ARA3200‘ titled, ‘Gender, Sexuality and Violence in Palestine/Israel’. The module takes place under the umbrella of the Institute of Arab and Islamic studies. Within this Institute, Ilan Pappe is the ‘Director of the European Centre for Palestine Studies.’

This may be a subject worth exploring, but it is also undoubtedly true, given Israel’s relatively free society, that it is an issue heavily weighing in Israel’s favour. Can you imagine casting this lens onto Hamas run Gaza? Or into the heart of the streets ruled by the gangs of Jenin?

But truth is not what the course is about. The expected outcome for the student makes that clear. It is to learn ‘how gender sustains settler colonialism’ and look at how gender ‘shapes resistance’ in Palestine/Israel. It is one sided nonsense and openly hostile to Israel.

The module provides a reading list for students to use in order to help master the subject. It lists papers written by eleven academics:

Eight of the eleven openly support the boycott movement BDS, two others have signed petitions against the IHRA. There is no dissent here.

This is not an academic course built to challenge and educate students. It is one sided hate being taught inside our universities. Students who graduate can take an MA, people who get an MA can embark on a PhD – and when they are finished, they can take up an academic role themselves – usually on another campus – thus spreading the hatred. This is exactly what has happened over the last several decades in academia throughout the west.

Note the focus of the academics

Consider the three key battles being fought today. There is a protest over the sacking of David Miller who abused Jewish students. Another protest occurred over the introduction of a definition of antisemitism on campus that is written to protect Jewish students. And the third battle is taking place because a university apologised over antisemitism in an academic paper.

These are the battle lines hundreds of academics have decided to draw. And none of these battle lines have anything to do with helping Palestinians at all – they are all about attacking Jews. It makes it all kind of obvious when you think about it.

108 thoughts on “Academics against Jews – another shameful story”