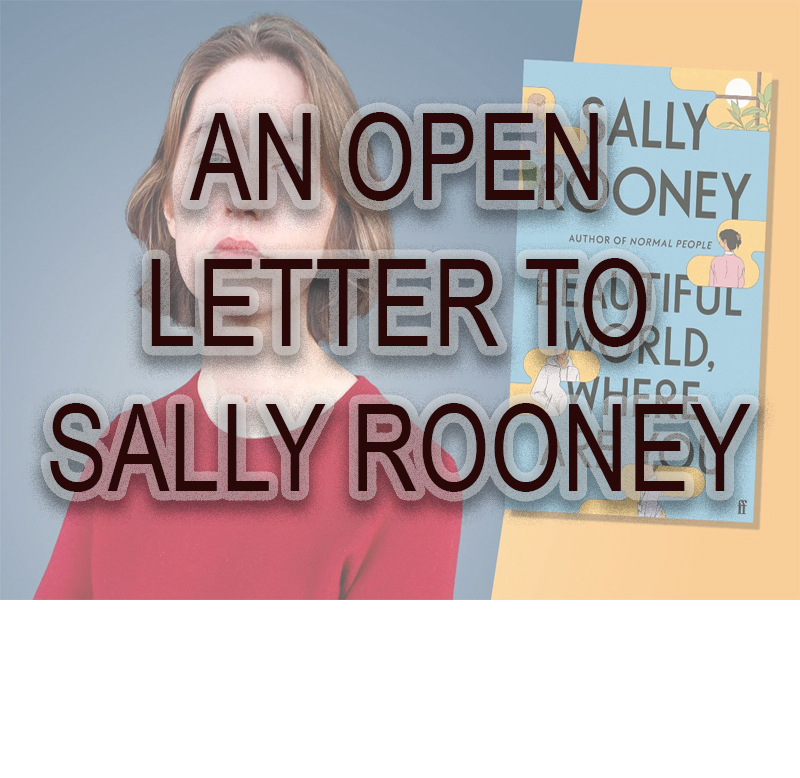 An open letter to Sally Rooney – on the boycott of Israel

I understand from the recent publicity that you are engaged in a boycott of Israel. Let’s be frank, the manner in which the story originally came out was a bit of a mess wasn’t it – because it painted you as someone who was boycotting Hebrew, rather than just Israel. Following this initial negative publicity, I am certain that the key players of the boycott movement circled around to protect you and helped compile the carefully worded but ultimately disingenuous statement that tried to undo some of the damage. The BDS camp have these public cultural boycott announcements down to a fine art (pardon the pun).

In reality of course you are still boycotting Hebrew speakers, because your statement creates an environment in which no publisher would find it viable to translate the book – if they cannot freely sell to Israelis in Israel. However you may try to word it, this really isn’t a good look.

But I am not here to point out the absurdities of your public announcement, but rather to question your wider support for the BDS movement. It always astonishes me when people who I do not believe are inherently antisemitic, align with something that is so clearly rooted in anti-Jewish sentiment.

Have you ever read a proper history book? Unfortunately for those suggesting Israel is a ‘colonial enterprise’, Israel was not born because the British empire created it – far from it. From the mid 1920’s, Zionism’s key fight was actually against the British Empire which sought to extinguish the Jewish project the international community had given it the Mandate to oversee. By the late 1930s Zionism was almost in open war against Britain – and with a short break so everyone could fight the Nazis together – the Zionists carried on fighting the British from 1945 onwards. It was the Jews fighting the British for their rights and independence – which is why back in those days, there was actually Irish Republican support for Zionism.

And have you ever looked closely at a map of the MENA region? Because the second Imperial force that stood against the rebirth of the Jewish nation was the remnants of the Islamic empire. It had fallen apart following the collapse of the Ottoman Empire and was busy trying to work out how to put itself back together again. The Arabs that you today call Palestinians, saw themselves as an indistinguishable part of this Arab empire. An area the Arabs had controlled – and an empire they built – through violent conquest.

What has turned it on its head – what makes people in the west see Israel as the ‘power-base’ and the Arabs as the tiny minority group standing helpless before the mighty Zionist onslaught – is raw, unfiltered antisemitism. Only an antisemite can read the history, look at a map of the middle east – see ‘Jewish power’ and think Israel is the problem that needs to be dealt with.

There is no rational, logical support for what BDS puts forward as its ‘case’. In turn, the arguments put forward by you and your friends as the reasons behind your support for BDS are beyond stupid, and easily exposed. Take this hypothetical scenario:

Seventy years ago, suppose that Ireland took in 50,000 refugees from country ‘x’. For political purposes Ireland decided to let them rot. It created camps for them to stagnate in. Rather than give them citizenship it denied them their rights – developed an Apartheid system around them – refusing them the ability to move or work freely. They were not allowed to buy property in Ireland either. They were locked in their camps.

And so it continued. Rather than sort out the mess it had developed within, what if Ireland let this horrific situation continue to grow. Then the refugees had children and then their children had children – all the while being forced to stay in their little refugee boxes. Let us imagine that today that these refugees in Ireland were still in their camps, now numbering about 200,000, having suffered 70 years of Irish apartheid, racism and persecution.

Would anyone in their right mind point the finger at country ‘x’ and blame them for this? Ireland created the Apartheid, Ireland was guilty of racism, Ireland committed this crime against refugees who should have been absorbed as citizens over 70 years ago. What on earth has country ‘x’ got to do with it?

This was actually the fate of Arabs who fled the civil and regional conflicts that were started by Arab Imperialists who sought to exterminate the Jews. The Arabs wanted the war, they started it, and luckily for the Jews – they lost it too. The end result of the conflict included a refugee problem. If you check out the third goal of that BDS movement that you are so fond of believing in you will see that in a truly perverse twist of truth, BDS blame Israel rather than the Arab nations who are responsible for the continued plight of these people. The refugees ended up in places like Lebanon where their human rights have been deliberately and severely abused for over 70 years. Yet BDS is telling you to boycott Israel for this. It is as transparent as the tropical water of the Red Sea.

BDS is about destroying Israel – the only Jewish state in the world and the only democracy in the entire MENA region. And you support it. Yet as the slave trade flourishes in some Arab nations, democracy is non-existent and human rights are unheard of – you do not take an issue with translations into Arabic. Nor do you have a problem with Chinese – with China a Titan of human rights abuses. Nor Russian, or any of the languages of the world’s real human rights abusers.

But it isn’t just about brazen hypocrisy. Last week I published a devastating report on antisemitism in Ireland. Those people you seem to feel comfortable surrounding yourself with are neck deep in anti-Jewish hatred. You side with those that believe the Protocols of the Elders of Zion are real, push Holocaust denial, rabid anti-Jewish conspiracy and wish for a violent end to Jews and Zionism. Not all of them sure, but how many antisemites do you have to stand alongside before you feel uncomfortable?

Because BDS plays on people’s antisemitism. The BDS National Committee is fully aware that they can make up any old story about Jews and Zionism and there are enough antisemites to drive their twisted demonising narrative into the mainstream. Once in the mainstream it finds support from the naive virtue signallers. People it seems, such as yourself.

This obsession with Israel exists in certain bubbles, but like most false paradigms, eventually the bubble will burst. I don’t know whether it will be 10 years from now (doubtful), 20 (probably a little too soon), or 50 years from now (almost certainly) but at some point mainstream researchers will be looking at the obscenity that is the ‘obsession with Israel’ and tearing it apart. They will point to the UN and the UNHRC targeting of the world’s only Jewish state and explain them away as despots ruling the roost – and they’ll go on to wonder at how it was that anyone took these organisations seriously. They will talk about the damage done by the increasing Islamist influence inside global NGOs like Amnesty and HRW too. But they will also turn to the players who supported the BDS boycott. By then it will be seen for what it is – just another attempt by the Arab ’empire’ to do away with the tiny Jewish enclave that fought for freedom in its midst. And those fools in the west that played along – boycotted the products of the Jewish state – or refused to have anything to do with publishing houses there – will be seen just as racists are always viewed through the lens of history. I have no doubt that your current actions will be held up as an example of the antisemitic fervour of the day. That will forever be part of Sally Rooney’s legacy.

So go ahead – boycott Israel. It isn’t like the Jews are not used to people boycotting them. Let your books continue to be translated into Chinese and not Hebrew – Israel will continue to thrive without the Israelis reading them. But you should always remember that the brave folk are the ones that stand up against the tide of rising antisemitism. Those who see the anti-Israel obsession for what it is and refuse to partake in the blatant attack on Jewish self-determination are the heroes worthy of remembering. Your actions are those of a coward.