When did the BBC and the Guardian become ‘fake news’ outlets? Last week the Guardian newspaper, published a letter, written by ‘over 200 Jewish members’. It was compiled to belittle the problem of antisemitism in the Labour Party, and in support of Jeremy Corbyn. For some (as yet to be discovered) reason, BBC News even gave airtime to it. The letter is no more than a rehash of the last time the Guardian decided to give this particular rabble a voice. Nor any different from the one before that, nor the one before that. We can follow this line all the way back to 2002, when the Guardian first gave publicity to the movement that was to become BDS.

Who is inside the rabble? People like Naomi Wimborne Idrissi, who have spoken under the flag of the soon to be proscribed Hezbollah and Elleanne Green, founder of the antisemitic Palestine Live Facebook group. Without the antisemites, this group could not gather a regular ‘minyan‘, which is why they never publicly demonstrate. In other words everybody should know, including those at the BBC and the Letters Editor at the Guardian newspaper, that this fringe crowd is not a legitimate ‘Jewish’ voice.

Last September, the Independent also gave publicity to another list of Jewish organisations that upon closer inspection was also not a legitimate Jewish voice. That list even contained the vile group ‘Scottish Jews against Zionism‘. The face of ‘ScottishJAZ’ is Jolanta Hadzic: 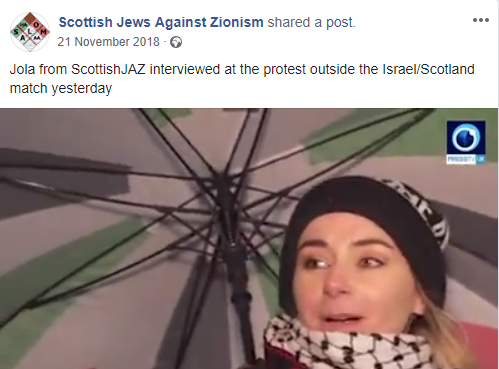 Jolanta is just another person who spreads rabid antisemitism and Holocaust denial: 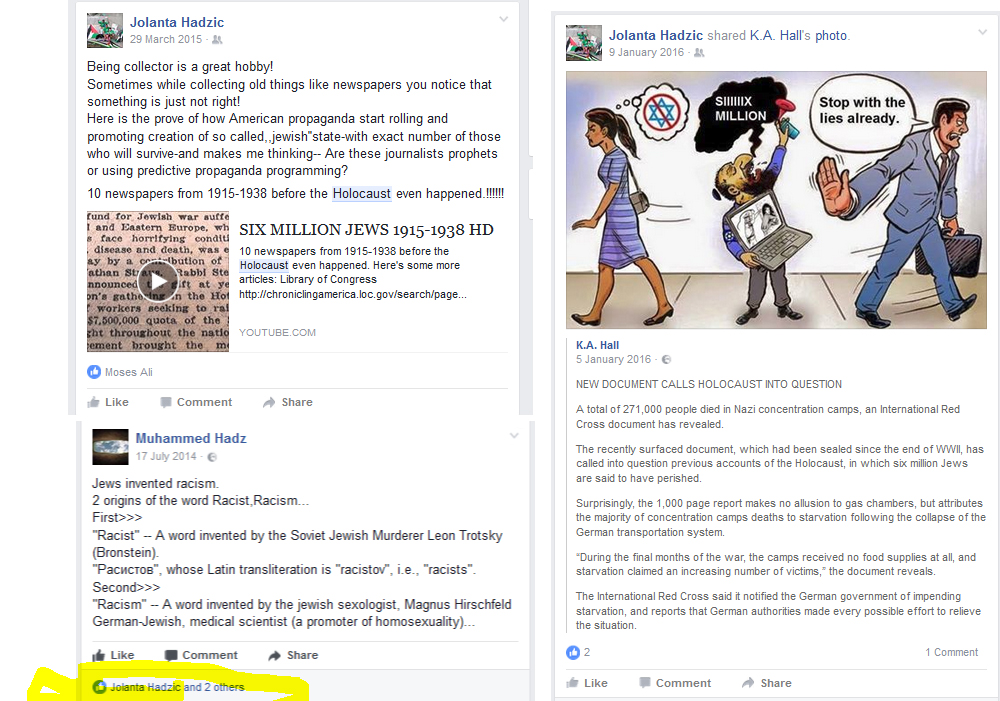 What do all these letters have in common? That it is always the same names. Some of those involved are not Jewish and some are even publicly outed hard-core antisemites. Both the Independent letter and the Guardian letter have signatories who spread Holocaust Denial. The situation is absurd. There are always people who will stand in opposition to anything. You can find Christians who oppose Christ, people who believe in Santa and Muslims who fast on Yom Kippur. There are more people who believe that they were abducted by aliens, than there are active anti-Zionist Jews in the UK. Would the BBC or Guardian run an article about alien abductees every time they aired a show featuring Brian Cox in order to ‘add balance’?

No of course not, because they would quickly be regarded as fake new junk sites. Which is exactly why we must not let them get away with how they treat Jews.

This is why the problem is far deeper than just a few Marxist troublemakers.  Those running Jewish Voice for Labour (JVL) and ‘ScottishJaz’ both know how small and insignificant their core membership is. In theory these people should be harmless. Yet when I first published my reports into the Palestine Solidarity Campaigns (PSC and SPSC), those in the UK who publicly stepped up to ‘ridicule’ the research, were a group called Free Speech on Israel (FSOI) and a Scottish writer named Sarah Glynn. Those behind FSOI went on to create the pro-Corbyn group JVL. Sarah Glynn was a founding member of ‘Scottish Jews against Zionism’.

Think about this. Sarah Glynn who read a report containing hard-core antisemitism, founded a ‘Jewish’ group in Scotland with a person who had been heavily included in the report. A person who she knows had spread hard-core antisemitism and Holocaust Denial. The same can be said of Mike Cushman, Naomi Wimborne Idrissi and all those in FSOI who after they read the report on the PSC, still chose to hang out with people like Elleanne Green who were included in that report. Even two years later, they are still presenting letters to the Guardian that include Green’s name. Nobody would take these groups seriously. Right?

Even as these people seem to be openly spitting in the face of British Jews, outlets such as the Independent, the Guardian and the BBC, don’t seem to care. This small group of Jewish people, accompanied by self-identifying Jews and the antisemites they all hold hands with, are given a stage far larger than their small number deserves. In Scotland the same rules apply. This is Sarah Glynn boasting about a letter from Scottish JAZ they had published in the ‘National’:

You want evidence of how twisted it can become? Jolanta Hadzic, seems to have signed the letter using the name ‘Jola Litwitz’ in what would appear to be an attempt to make herself ‘sound Jewish’. It seems a bit of a coincidence that the global virtual footprint of ‘Jola Litwitz’ spreads no further than SJAZZ letters and notice how the name Hadzic is not on them.

So why does Jolanta Hadzic become Jola Litwitz when it comes to signing letters that need Jewish names? And just as importantly, why are JVL deploying Holocaust deniers when they write open letters to the Board of Deputies: 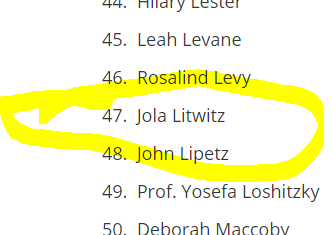 What is going on? The National should apologise for having published the letter, as should the BBC and Guardian, but of course they never will. How does Sarah Glynn justifying counter-signing such behaviour? For the same reason Idrissi, Cushman and Rosenhead can walk with Elleanne Green and Tony Gratrex. They don’t care a jot, and they know from the fact that they are still being offered a platform, that nobody else cares either. How can either the BBC or Guardian *EVER* give any of these people a microphone?

16th March is the date for the annual ‘Stand Up To Racism‘ demonstrations. As usual pro-Israeli groups like ‘the Confederation of Friends of Israel‘ may well join the march. Scottish Jews Against Zionism don’t want ‘Zionists’ (read Jews) on the street, so have publicly called for civil disobedience to prevent groups like CoFIS  joining the march:

Which means that a group led by someone who has shared hard-core antisemitic material and Holocaust denial has put on a ‘Jewish hat’ to call for civil disobedience to exclude Jews from marching against racism. It must be hoped that the police in Scotland can see through the disguise and give the Jewish people in Scotland the protection that they clearly desperately need. If they really wanted to do their job properly, they could do worse than have a much closer look at ‘Jola Litwitz’ and those that use her to attack Scottish Jews.

And yet the Guardian, BBC and Independent all give groups like this airtime, legitimacy and allow them to spread poison. This is why things have become so serious.

It is the associations that need exposing. Somewhere inside organisations such as the BBC and the Guardian are people that use Jews for click bait; or perhaps they are antisemites too. The result is that these organisations spread what can only be described as ‘fake news’. Alllowing their viewers to believe the Jewish community is split 50/50, in some type of ‘he said’ ‘she said’ argument. That is the key issue that needs addressing. Engaging the Marxists plays into their hands and legitimises them. All of the anti-Zionist Jewish movements are in bed with hard-core antisemitism. Behind closed doors many of them freely associate with people who spread Holocaust denial and share white-supremacist material. The problem is just as bad in the United States as it is in the UK. We need to expose and shatter the connection between all these antisemites and the gullible audience, whatever the connection is and wherever it is hidden.

Which is where I am today. It is safe to assume that when I am not posting regular blogs, large detailed reports are on their way. Do stay tuned.

This blog is unique and I engage in deep undercover research into antisemitism and the revisionist narrative against Israel. The work is fully independent and I have uncovered many key stories on antisemitism on this site. I was recently named as one of the J100 (‘top 100 people positively influencing Jewish life’) by The Algemeiner. There *are several* ongoing large projects nearing completion. There is always upcoming work in the pipeline. Not everything is visible, but when I am at my most quiet, antisemites get nervous.

Every contribution is truly appreciated and goes towards fighting those that hate us.

128 thoughts on “The BBC and Guardian as fake news outlets. Enabling antisemites.”