The obsessions of Antisemites

Most people do not understand antisemitism at all. The question “what did he say that was antisemitic” is one almost immediately encountered when challenging antisemites. But antisemitism is not just about individual acts – anti-Jewish hatred is a mindset. The antisemite carries a grossly distorted view of how things work.

Opposing the Jew – in whatever form the Jew may take – almost always becomes a human rights cause.

Which brings us to the obsession with Israel. I know that as some people read that they will roll their eyes – but this is exactly my point. Obsession with Israel has become so normalised many people no longer see it for what it is. The UN, NGOs, left-wing media, some church groups, student societies even the ICC – all distort reality and demonise Israel. And it escalates. The more people buy into it over time, the wilder the accusations can get. Today, words such as ‘genocide’ ‘ethnic cleansing’ and ‘apartheid’ are all frequently attached to Israel. Lies built on top of other lies.

The antisemitic obsession has become so normalised that those amplifying it no longer try to maintain an appearance of impartiality. The Amnesty report? One of the key people behind their ‘report’ is a Palestinian activist who had a fetish for using Palestinian terrorists as his Facebook profile picture. Many of Amnesty’s key staffers obsess and lie about Israel. In the field, Amnesty employ people with a history of anti-Israel activism and sends them in as ‘unbiased human rights workers’ to report on what is happening. Their twisted accounts then provide the motivations for constructing far larger Amnesty campaigns against Israel.

There should not be a forum in the world in which this is taken seriously. Yet there is hardly a media outlet that did not promote the findings of the Amnesty report with lengthy articles.  We live in a world in which the United Nations Human Rights Council consists chiefly of despotic human rights abusers – and like many NGOs that constantly attack Israel – much of it is funded and rubber-stamped by western democracies.

The pro-Palestinian movement surely cannot believe its luck. They can produce a picture of a puddle created during a month of heavy rainfall – place a narrative upon it that suggests Israel has poisoned the water – and the image goes viral. Imaginary dams can flood, a few tents become towns, 17-year-old terrorists with guns become ‘innocent children’ and rioting protestors become ‘worshippers in a mosque’.

It may all be nonsense but it is foolish to dismiss it. The lies are perceived wisdom in many circles today – and the hatred these lies generate is very real.

None of this new. Most of the major antisemitic attacks against Jews – the ones that led to the largest bouts of violence, were supported by the science of the time. Have no doubt that as the bubonic plague ravaged Europe, the stories of the Jews poisoning the wells had been suitably ‘proven’.

In 1941, as academically supported racial theories were about to unleash the Holocaust on European Jewry, Hitler sent his Einsatzgruppen to lead the extermination of Jews. Many of the commanders held doctorates because Reinhard Heydrich specifically sought out highly educated men for the task.

What we call anti-Zionism today is just a rehash of the antisemitic ‘scientific theory’ formed inside the communist and KGB think-tanks of the Soviet Union.

And so it goes on. The idea floated recently that Anne Frank had ‘white privilege‘ is rooted in pseudo-scientific Critical Race Theory. Inside Post-Colonial studies, ‘science’ somehow turns the Jews into white European settlers. This just two generations after the Jews were all but annihilated in Europe because ‘science’ had proven that Jews were not ‘white’. The antisemitic Khazarian myth – which supported Nazi and Soviet antisemitism – is currently being propagated by publications at western universities.

As a product of all this ‘science’, there are scores of books published each year, ‘proving’ that Israel is some type of unholy terror state.

Hate is capable of dressing up to look like whatever it wants. It can produce legal arguments that suggest Jews celebrating Jewish holidays is a racist act. NGOs can write lengthy reports to ‘prove’ Israel is an apartheid state. 9/11 conspiracy theorists can ‘factually prove’ Zionists were behind the attack on the towers. There are 1000s of videos ‘proving’ that Jewish banking families were behind both world wars. And CNN can ‘prove’ Israel deliberately shot a journalist even without having access to the soldier, the bullet or many of the necessary facts.

In global terms Israel is involved in a tiny conflict. A war that would have ended in 1949 and long been forgotten – if not for the horrific demonisation campaign that targeted the Jewish state. Of course there is no peace! Why on earth would the local Arabs *EVER* compromise and accept a peace deal? Every smear created about their enemies is swallowed whole. The world even built a special type of ‘refugee’ just for the Palestinians and created a unique agency (UNRWA) to look after them. Which in turn employed terrorist supporters and antisemites to teach Palestinian children awful lies about Jews.

And Jewish people have become so used to it – this antisemitism has become so normalised – that their starting point in discussion is often defensive and apologetic. Some have even bought into the inverse reality so much – they’ve basically switched sides.

The scale of the lie is simply staggering. Since the beginning of 2017, approximately 270 Palestinians in Jerusalem and the PA areas (excluding Gaza) have been killed in the conflict with Israel

Bearing in mind Gaza remains totally silent unless Hamas launches attacks – this statistic is the important one. For example, during 2020, a year of relative calm on the Gaza border, only 1 Palestinian was killed. That Palestinian was Muhammad ‘Ali Hassan a-Na’em – an Islamic Jihad operative who was killed by the IDF whilst trying to plant explosives. If Hamas does not launch hostilities from Gaza – there are no casualties on either side.

Also remember that the figure of 270 deaths includes over 100 terrorists who were engaged directly in attempts to murder Israelis and another 100+ who were involved in violent confrontations with the Israeli army.

In a peaceful country such as Scotland there are approximately 60 murders a year. This means we can create a statistical fact. If you are Palestinian in Judea and Samaria – and you do not try to harm Israelis – then your chance of being killed is far less than that of a person walking the streets of Scotland.

This is seriously what some people call Genocide? Is Israel really a barbaric state that needs to be investigated by the ICC?

The reality is so far removed from the ‘facts’ spreading through the streets of the west that many have lost themselves inside these obsessive antisemitic delusions.

Before 1920 the word ‘Palestinian’ was never used in parliament (simply because ‘Palestinian’ did not exist). A search of parliamentary mentions clearly shows how a tiny conflict has turned into an obsession – even within the halls of power: 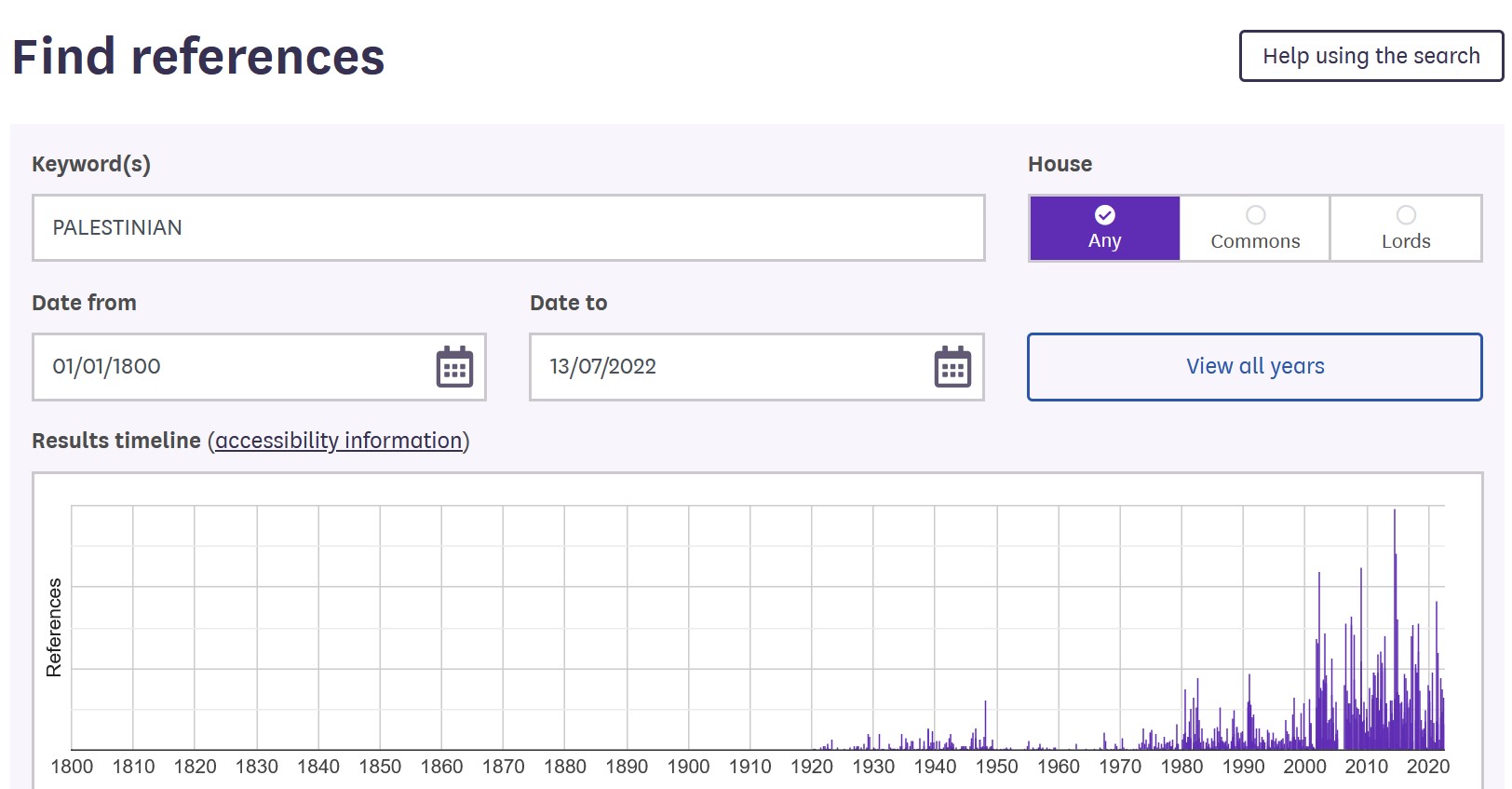 Wherever you look in the pro-Palestinian camp you will find antisemitic obsessives leading the charge. Take Pete Gregson, who was expelled from the GMB union for antisemitism (amongst other things he said that Israel exaggerates the Holocaust’). There is no doubt about Gregson’s antisemitism. This image – suggesting Zionists belong in ”Kazakhstan’ – is taken from his website, which is titled unashamedly ‘Campaign against Bogus Antisemitism’:

Gregson is from Aberdeen. He recently tried and failed to have Edinburgh twinned with Gaza and he is now planning to bring a Neturei Karta Rabbi (extremist Jewish cult) from the US on tour. What makes a guy from Aberdeen obsess about a low-level conflict 1000s of miles away? Genocide? Daily killings of Children? It is all bunkum. There are surely far greater problems in Scotland that need dealing with, but Gregson’s head is now riddled with antisemitic lies and conspiracy theory.

He is far from alone. The west is full of such people. Chris Williamson was the MP for Derby. Now he is an antisemitic conspiracy theorist pushing hate on Iranian state TV. Jackie Walker ex Vice-Chair of Momentum, Professor David Miller, formerly of Bristol University, they all caught the bug. Whatever their imagination turned ‘Zionism’ into, it took them to a truly dark place. There are 1000s of antisemites providing most of the energy behind anti-Israel activism on the street. One of Palestine Action’s key activists is a Holocaust denier. The Palestine Solidarity Campaigns of England, Scotland and Ireland are all held afloat by little more than the antisemitic drive of their membership.

The lies about Israel of today are built upon the lies about Israel yesterday. It creates inevitable escalation. BDS Boston recently drew up a map of Jewish and Zionist institutions, universities, organisations, and individuals to be targeted. A map that would not look out of place in the 1930s.

The antisemites and their defenders

Whilst there is no doubt that much of the activism against Israel is driven by antisemites – these people feed from the lies being spread through the mainstream. Pushed mainly by Journalists who have long ago removed the mask of impartiality. This includes those at Sky News, the BBC, the Guardian, CNN and the NYT – whose networks rely on Palestinian support – and mostly produce pieces that bolster the disinformation campaign.

Just as they have always done, lies about Jews create the atmosphere for antisemitism to thrive.

Just recently, Amnesty’s general secretary Agnese Callamard said critics of their ‘Israel apartheid’ report ‘weaponise antisemitism’. Callamard runs an organisation that spread libels about Israel – driven by the Islamist extremists and antisemites in her own camp – and then attacks the Jewish people who stand up against her organisation’s racist falsehoods.

Jews ‘weaponising antisemitism’ is the latest of the anti-Jewish libels. Events on the subject are held globally and academics provide the neccessary ‘science’ to ‘prove’ the accusation is real. Websites are created about ‘bogus antisemitism’ and those called out for their anti-Jewish hatred receive applause as they claim they are victims of a ‘Zionist witch hunt’.

The media is happy to lend a hand, by publishing endless articles about how anti-Zionism is not antisemitism – or by promoting that view that it is all about silencing ‘legitimate criticism of Israel’. (BBC, Guardian, NYT, CNN, Irish Times, Independent, Washington Post )

Antisemites and their defenders. A partnership that has lasted over 1000 years. Plus ça change, plus c’est la même chose.

10 thoughts on “The antisemites and their defenders”