Sarah Wilkinson is a Holocaust denier and rabid antisemitic conspiracy theorist. She is also a star of UK anti-Israel activism. Sarah Wilkinson was one of the three people recently charged over an attack on an Elbit factory, and has appeared in ‘Palestine Action‘ videos boasting about the feat.

Yesterday she posted an absurd statement of denial about her antisemitism. Why is the Sarah Wilkinson case important? Because it highlights why those on our side that expect goodwill from more ‘moderate’ voices are badly mistaken.

Wilkinson is from the Midlands and operated the West Midlands Palestine Solidarity Campaign Twitter feed for a while. She attends events across the country and is a well-known figure in the anti-Israel camp. I have reported on the antisemitism of Sarah Wilkinson several times. There is even a video of her turning violent on a Jewish attendee at an event. Sarah Wilkinson has shared some of the most vile anti-Jewish conspiracy ideologies. Here are a few examples of her posts:

She said the head of ISIS was a Jew and liked posts about the ‘Rothschild war’ path:

This toxic anti-Jewish extremist is the person that Palestine Action proudly put in their video. She is a leading activist in a group that Extinction Rebellion share actions with.

The denial of the Holocaust denier

Hanging around with Holocaust deniers brings bad publicity, and someone from either Palestine Action, or more probably Extinction Rebellion clearly rattled the cage of Sarah Wilkinson over her antisemitism – because yesterday, she put out a statement of denial.

In a truly absurd piece of fiction, she stated that she hadn’t posted any antisemitism. Sarah Wilkinson claimed it was a plot to discredit her. Wilkinson went on to suggest there was a ‘parody account’ that had nothing to do with her.

Sarah Wilkinson is a liar

I suppose when you spread Holocaust denial, simple lies are a minor infringement. Researchers often ‘save’ pages of interest that they see – precisely so offenders cannot simply airbrush them out of history. You can view an original tweet in the internet archive from 2017 and very clearly see it comes from Sarah Wilkinson’s personal Twitter account: 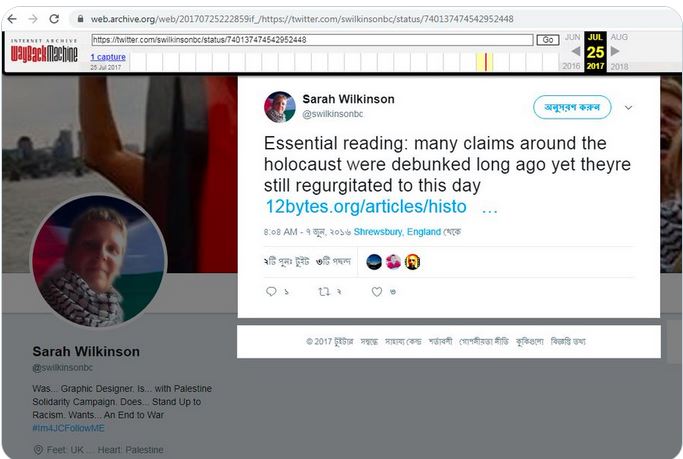 For those interested, you can access the neo-Nazi, Holocaust denying, website she links to (NSFW). Although this provides 100% proof they were her tweets, I will provide one other piece of evidence. In 2017, Wilkinson shared an article on my report, which contained images of her posts. She referenced being inside the report – but made absolutely no mention of any fake posts or parody accounts:

The evidence above is concrete and Wilkinson has clearly scoured her own account to delete problematic tweets.

Wilkinson’s denial makes everything worse. Instead of ignoring the accusations or excusing them – Sarah Wilkinson blamed it on the Jews. ‘Zionists’ were not just behind 7/7 and 9-11 but they also created a troll account which is trying to discredit her. She actually blamed us for her trouble. Wilkinson knew as she deleted those Holocaust denying tweets, exactly what she was doing. She wanted to deny the Holocaust AND play the victim. How toxic can you get?

Too much value to throw away

In a normal world, someone who has shared hard-core antisemitic ideology would be shunned, but that is not the case in anti-Israel activism. Wilkinson has value and so whether what she says is or is not true- ceases to matter. Just like holding up a fake photo from Syria and claiming it is Gaza – if Wilkinson says these tweets were not hers, then they were not hers:

Sarah Wilkinson has 58000 followers on Twitter. Her foul and ridiculous denial received 1000 likes and over 500 retweets. It is worthwhile looking at some of those who supported her:

Rabbi David Mivasair, from Independent Jewish Voices and the JVP Rabbinical Council came out in support of the Holocaust denier:

Mivasair is in the toxic Facebook group Palestine Live and my report on American activists inside the group proved he has no problem hanging out with hard-core antisemites.

Silverstein is also active in Palestine Live and has become little more than an antisemitic conspiracy theorist himself.

No prizes for guessing that a branch of the Palestine Solidarity Campaign came out for team Wilkinson:

There is no goodwill

So remember all this the next time you see an attack on a Jewish or Israeli business led by a group such as Palestine Action or Extinction Rebellion. Think of the twisted ideologies of those behind the masks. Either they share antisemitic conspiracy theories and Holocaust denial or don’t care if their fellow activists do.

And if a Holocaust denying, antisemitic conspiracy theorist is acceptable to JVP, the PSC, Palestine Action or Tikkun Olum – then what or who isn’t? Holocaust Denial and racism against Jews does not matter to them. There is a cause, Sarah Wilkinson is valuable to the cause – if she is a toxic antisemite, well then, they can look past that. They even get to benefit from the extra motivation this provides.

100s came out to support Wilkinson. And those that follow her do not seem to care either. A sitting member of the Labour Party’s National Executive Committee, when informed about Wilkinson’s antisemitism by a campaigner, chose to block the campaigner rather than unfollow Wilkinson.

This is why those on our side, who still think through prisms of ‘fair play’ and ‘moderates’, keep getting it wrong. There is no goodwill on the other side. Stop pretending it is there. This is not about settlements or Gaza. It is ALL about the very existence of the Jewish state. A Holocaust denying antisemite is helping to lead the charge against British Jews and NOT ONE of the pro-Palestinian organisations will publicly distance themselves from her.