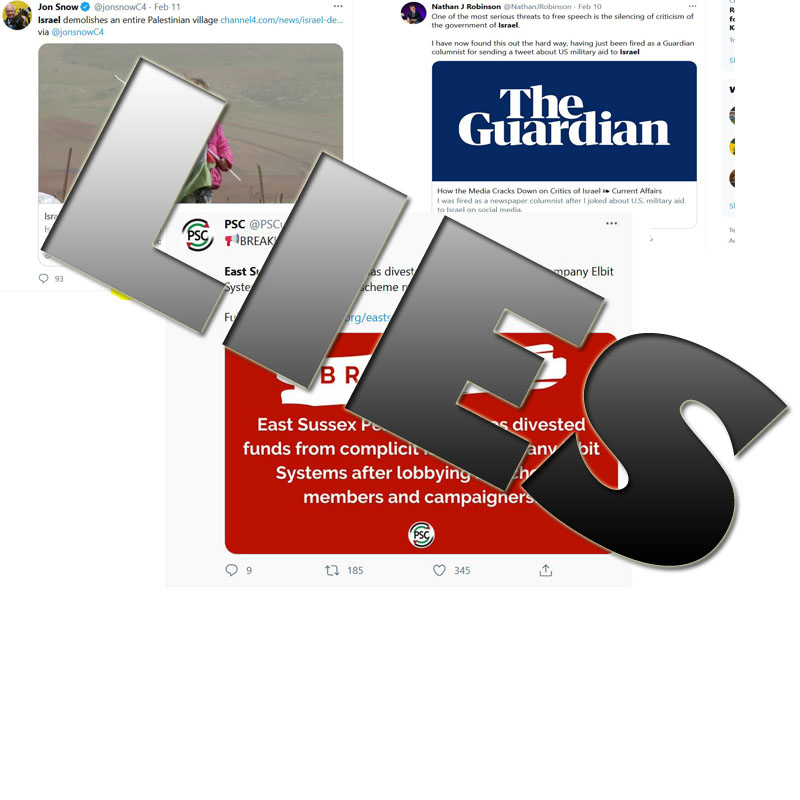 I am just coming to the end of a project that has taken almost a year and had promised myself that I would not get distracted in the final stretch. But when this week highlighted just how badly anti-Israel activism is dependant on fake news and lies, I decided to take a slight detour to share it with you.

Divestment and the lies of BDS

The boycott movement against Israel is a complete failure. Israel’s hi-tech economy is booming (Covvid aside – tourism was booming too) and BDS has nothing to show for 16 years of effort but a few activists taking selfies next to avocados on a supermarket shelf.

Sure, in confined political student circles, 14 students can force through a pro-BDS vote whilst the 22000 non politically active students on campus are busy with their actual studies, but in the real world – all of these students use Israeli hi-tech to communicate with each other.

BDS is a noise that spreads antisemitism, demonises Zionism, and hurts Jews in the diaspora but it doesn’t actually do damage to Israel. Worse than this, where it does have some effect, it just ends up hurting Palestinians.

Because of this failure, what the BDS movement is forced to do is engage an absurd fake news strategy – any divestment of any Israeli stock or product for any reason – is promoted as a BDS victory.

For example – even when a football club changes kit supplier – something they all do every few years- if it is the brand of kit used by the Israeli team – BDS will falsely claim it is a ‘divestment’. In the end, the embarrassed club can even be forced to issue a statement rejecting the claim. This happened to Luton Town FC just last year. Think for a while how pathetic this all is.

And if the evidence is not even there, they make it all up anyway. BDS and toxic organisations such as the Palestinian Solidarity Campaign just love to spread lies. It is all they have.

This week provided a perfect example. The Palestine Solidarity Campaign ran with a story that the East Sussex Pension fund had divested from Elbit, a successful Israeli arms company. 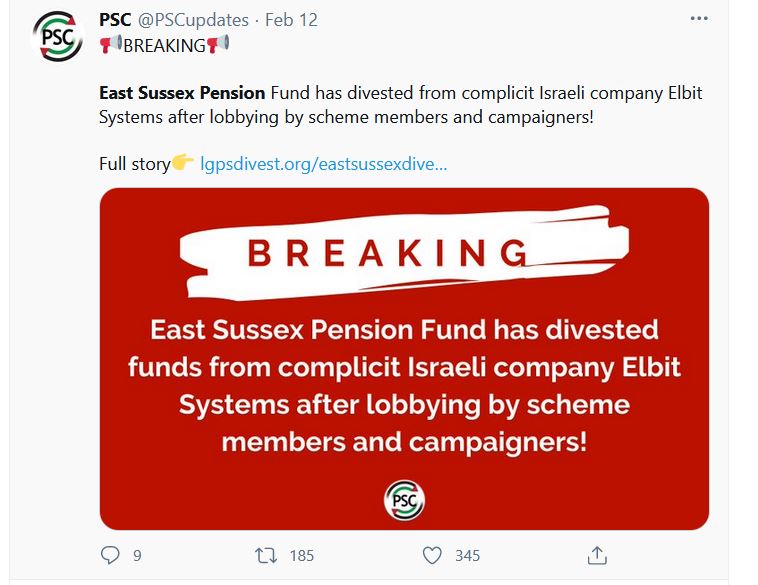 The news went around. The official BDS movement bragged about it, the thugs at Palestine Action sang about it, and Middle East Monitor wrote an article in celebration.

Ben Jamal, the hapless director of the PSC followed suit.  Incredibly, an industry magazine, ‘Pensions Age‘ ran with the story too, in an article written by Jack Gray, their Brighton-based ‘News Editor‘.

Except of course the story is simply not true.

It is true that the PSC has been hounding the fund. During the last meetings of the fund committee – the PSC ran a campaign that got a few of their eager soldiers to write letters to ask the fund to divest from Israeli companies.

But in December, the committee gave a written response – that the PSC saw- and it was made absolutely clear that the fund couldn’t actively divest from Elbit.

Not only did the fund have just 16k invested in Elbit at the time, but it was all tied up in ‘passive’ investments. Which (response – page 14) the Committee explained, means “there is no ability to divest from any specific company within it”. Or in plain English, the East Sussex Pension Fund cannot choose whether or not that 16k would remain in Elbit.

Whilst the fund continues to hold passive equities, the East Sussex Pension fund could not choose to divest from Elbit. The 16k may have since been reallocated by a third party – it could just as easily have doubled. This PSC story is fake news – empty propaganda.

The written response even makes clear that East Sussex Pension is not an ‘ethical fund’ and its primary legal function is to pay pensions to the fund beneficiaries when they become due (make money to pay pensions). Which basically tells the PSC where to stick it.

The absurd lies of the antisemites

The whole situation is absurd. The PSC is a rancid organisation riddled with antisemites. They launch a campaign and ask their followers to swamp a council pension fund with letters of complaint. You can read the letters here (from page seven). Most of the letters are also full of lies -which isn’t a surprise given who is writing them

As an example, one of the people who wrote to the Pension fund was David Roger. On Facebook he refers to Hamas as “a totally legitimate resistance army” – and Roger often posts rancid conspiracy theory – like these (‘Humansarefree’ is a toxic antisemitic conspiracy website -see example of antisemitism):

His timeline is full of Mossad, 9/11, and Rothschild’s’ banker’ nonsense. This means that the Pension fund is being pestered by antisemites who want the fund to lose money – all in order to boycott the Jewish state. Why is the fund listening to anti-Jewish racists in the first place?

Almost as worrying as the fake news story is a comment in the meeting’s minutes which suggests that Councillor Fox had agreed with the antisemites and had referred several times in the discussion to ‘stolen land’. Gerard Fox is a Conservative Councillor and he should be asked whether he actually used these errant, disgraceful words.

As part of this research, I emailed both the reporter and Head Editor of Pension Age asking why they had engaged in spreading fake anti-Israel propaganda. To their credit, Francesca Fabrizi, the Chief Editor responded by taking the article down to investigate further. At the time of writing, the article has not been republished. Fabrizi needs to ask some serious questions of her Brighton-based reporter. Just where did he pick up this trashy fake news story from?

Those running the PSC are not the only liars currently spreading fake anti-Israel news. Everywhere you look – anti-Israel activists are publishing nothing but lies. This week Jon Snow produced a two-minute segment for Channel 4: 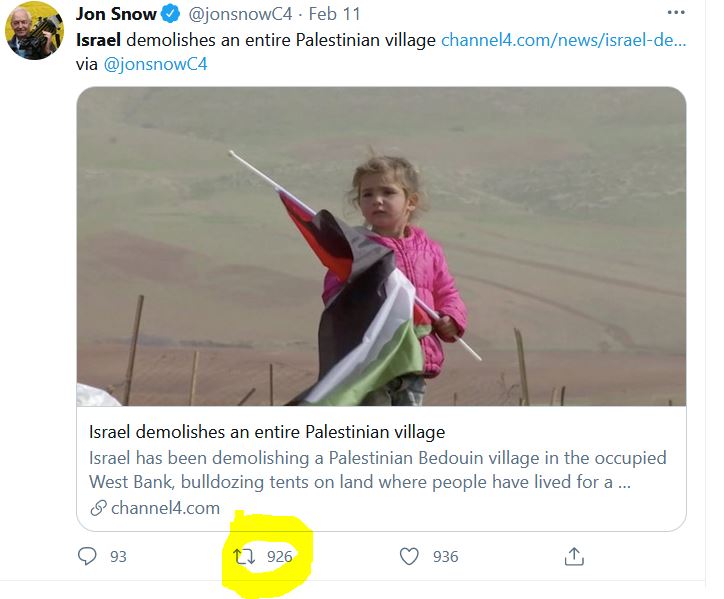 This is a fake news story – just the same old story about a few illegally placed tents that we have seen so many times before. It is a lie, placed on top of fiction, that sits upon falsehood, that is all covered with lashings of non-factual detail. There is no hiding the venom with which the piece was written. ‘Israel demolishes an entire Palestine village‘. In reality, Israel moved on a handful of travelers, just as nations across Europe – including the UK – often do.

At this point the Guardian, Independent, Channel 4, NYT – none of them care whether or not a story has any basis in truth – they publish anyway – and because it demonises Israel, it goes viral.

The Guardian and the lies of Nathan Robinson 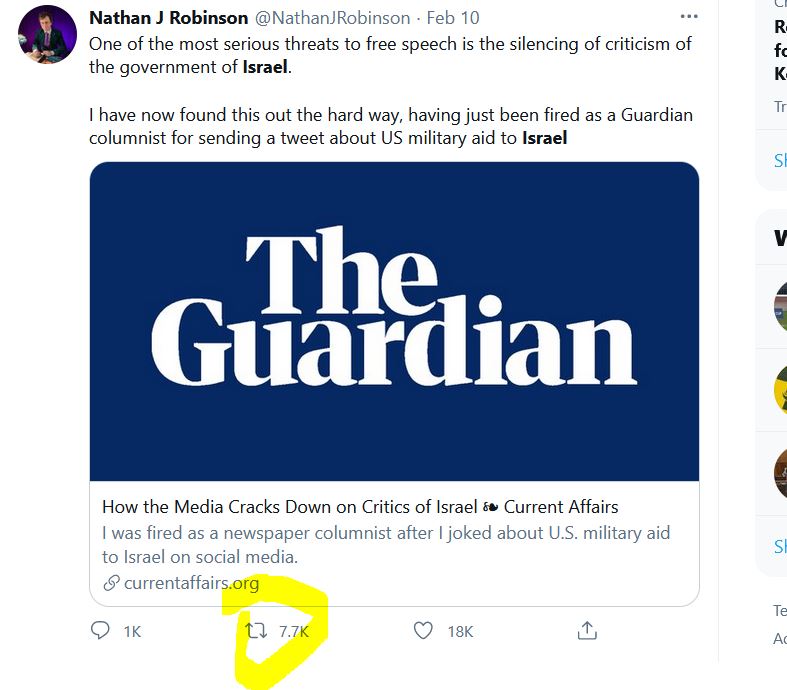 Robinson claimed he was sacked by Guardian for criticising Israel. The truth is that Robinson never worked for the Guardian. If he was sanctioned by the paper – (and they have since denied it) they did so because he was spreading fake news. This viral story was just more lies but this one post alone received 7.7K retweets.

And then there is the hypocrisy- does Nathan Robinson even read his own articles? Here he is just a few months ago OPPOSING free speech platforms.

And it is not just fake news that goes viral – any lie about Israel will do – take a look at this one: 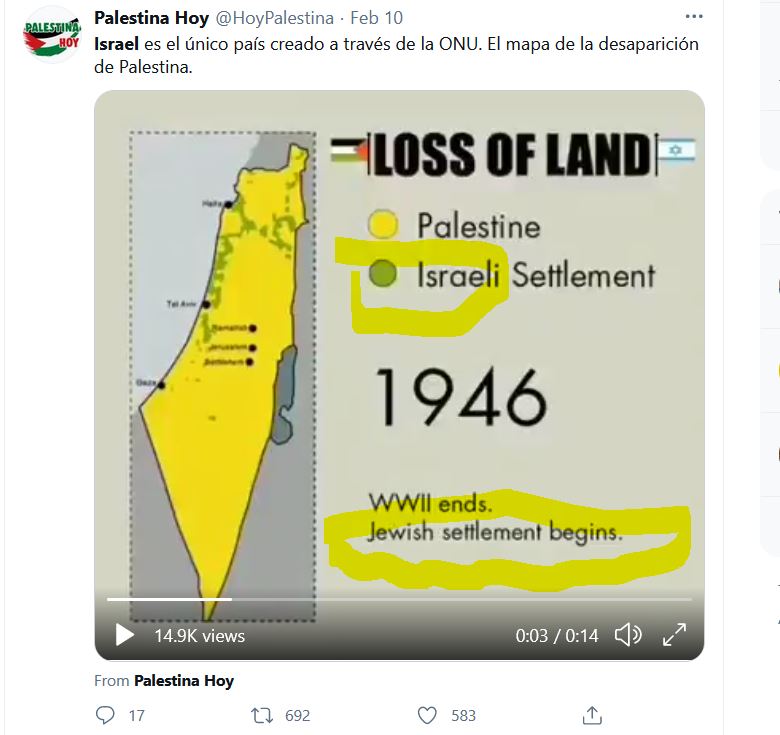 692 retweets of a map which suggests Jewish settlement in ‘Palestine’ begins in 1946. Simply mind-numbing.

Spinning stories across online media. Anti-Israel activism is an endless stream of lies.

I always refer to antisemitism being one of the pillars holding the Palestinian flag aloft. ‘Lies’ is another pillar. What we are fighting is not interested in the truth, it seeks to spread hate – and it does not care how it needs to do it. Always remember – if the truth supported their position – they wouldn’t need to lie all the time.