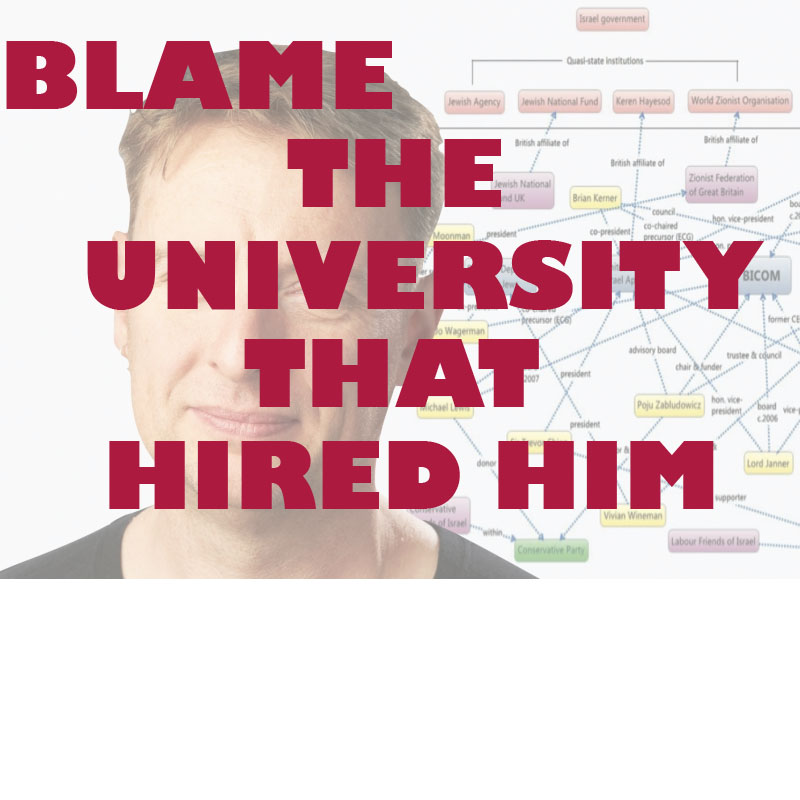 David Miller must live in a dark world and his recent comments about Zionism and the Bristol University Jewish Society were outrageous. But none of this is new. Miller has been dripping this type of poison for well over a decade. Given his history, the University of Bristol must take responsibility for having given him a role in the first place.

Before David Miller was at the University of Bristol, before Bath, he was at Strathclyde. Whilst at Strathclyde he set up ‘SpinWatch’. Behind David Miller is a whole history of ‘Zionist lobby’ obsessions. As far back as eleven years ago, there was already a website dedicated in part to pointing out the antisemitism that circled his work.

Given the publicity his latest antisemitic outbursts have received, there is no need to recount his long and chequered past. This man has even blamed a rise in ‘Islamophobia’ on ‘Zionist’ strategy and suggested a community interfaith project was a ‘Zionist’ trojan horse. Nobody should be surprised at where we find ourselves today. If you are interested in a refresher course, you can see more elsewhere. (Twitter, Twitter2, spinwatch-watch, BOD, blog, blog)

His latest statements were so glaringly unacceptable, that Miller has so far only received public support from predictable sewer swimmers – such as – Press TV, Chris Williamson, Asa Winstanley, Miko Peled and Malia Bouattia. That situation will probably change swiftly if the university takes any action against him.

David Miller and his defenders are hiding behind the term ‘academic freedom’, which is absurd. Even freedom of speech is not absolute and academic freedom has far less flexibility. It is bound by the laws of the land, restricted somewhat by the Overton window, and held in check by the terms and conditions of the academic institution in which the research takes place. There are a million things that David Miller cannot say, do or research. One of the first things an academic student learns before embarking on research is an ‘ethical code’. This would not be necessary in a world in which academic freedom reigns supreme.

There is no academic right to be racist

There are lots of things that cannot be researched at university. Imagine the outrage if someone started mapping non-white students (who are not Jews) and implying they are 5th columnists working for a foreign power, trying to subvert British democracy and working to silence opposition. Such an academic would be called a Nazi – and instantly dismissed from any position that they held. There is not a chance that someone such as this, would freely get away with mapping this minority for a decade and still be held in high regard and offered senior positions on campus.

The argument would be clear – there is no academic freedom when it comes to racism. And those on the left would all applaud the dismissal. The only time this is not true is when the discussion is about Jews, Jews as 5th columnists, Jews trying to subvert British democracy and Jews working in secret networks to silence opposition. In a case such as this – the toxic left perversely comes out to defend the academic.

One of the key issues with academia is that academics mostly see an attack on one as an attack on them all. Raising the cry of ‘academic freedom’ immediately gains majority support. We witnessed this in the battle to address the bias in the proposed 2015 conference at Southampton University. The problem with that conference was not so much what was being discussed, but that it was being discussed without academic challenge. Still – the conference defenders successfully marketed the campaign as a fight for academic freedom. 1000s signed petitions calling for Southampton University either not to cancel – or later to reinstate the conference. Yes it was cancelled, but this occurred despite large-scale academic opposition.

Academics consider themselves a superior breed. Ilan Pappe – a historian and activist, is on record admitting lies can be important, yet he runs a history department at Exeter University. How can anyone justify a historian that accepts it is sometimes necessary to lie for the cause, being allowed to teach students? Despite all the evidence – he is part of a protected species. This very notion of supremacism left academia unable to police or protect itself. It was eaten from within.

The black hole of anti-Zionism

Modern anti-Zionism is a false paradigm built on lies, misdirection and false history. There is also no connection to pre-war anti-Zionist movements at all. Proponents of the right to abortion do not advocate the right to kill children after birth -there is a big difference. Like many modern anti-Zionist concepts, it is a difference anti-Zionists hide – trying to suggest that they are a continuation of a far more legitimate (although ultimately mistaken) historically contextualised discussion.

Today’s anti-Zionism occurs in a vacuum. Built on pillars of disinformation, it cannot exist in the same room as Zionism – nor is it capable of countering the core Zionist arguments. Therefore the first rule of anti-Zionism is non-engagement – the second is the removal of the Zionist voice from the room. To bring this about ‘Zionism’ was falsely described as part of the imperialist ‘colonial’ world vision, and with the need to ‘decolonise’ academic space, the non-platforming of Zionism became part of the wider strategy of the ‘radical left’.

Those caught within the false paradigm enter a black hole from which escape is almost impossible. To counter the hypocrisy and weakness of their underlying positions, anti-Zionists are forced to incrementally ‘bolt-on’ several additional ‘facts’ in order for the core belief to remain inherently intact. It is in this attempt to maintain a coherent argument with puzzle pieces that do not fit together, that anti-Zionism needs antisemitism in order to survive. To explain away their own weakness and failures, Zionist power, Zionist media and Zionist money become necessary additions to their core belief system.

Thus the western democratic nations that support Israel are all seen as infected with the Zionist curse. With western media apparently in the hands of those pesky Jews, they swiftly turn to the Iranian or Russian press for their news. Because they are wrong in almost everything they believe, the more they push, the more push-back they feel. Inevitably this reinforces the notion of ‘Zionist power’ that they fear so much. The monster in their heads just keeps growing.  This monster swallowed David Miller whole.

I have long said Corbyn was a symptom of a far greater problem and only now is that beginning to be more widely understood. The rewriting of history took place in academic halls long before it began to spread on social media. We witnessed the growth of anti-Israel movements only after academic activists had provided them with faux legitimacy. The NGOs fighting against Israel are full of graduates who were taught their twisted hatred, whilst studying at government-funded educational institutions. A whole generation of academics has arisen, who view the world through an antisemitic lens. They protect each other, stand together to silence dissent and spread their false tales to all the new students that appear. It is a factory that creates clones.

If they leave academia to branch out into law, politics or non-profit work, they spread their toxic beliefs wherever they land. It was only a matter of time before a mainstream political party became a target.

In comparison to the battle against Corbynism’s invasion of the Labour party, we are faced with a much more difficult fight. Academia will be protected by academics. The wider uninformed public will not tolerate interference with something that all the little graduate soldiers in media and in NGOs will come out to defend. David Miller’s case highlights this perfectly. The Bristol faculty, certainly the parts surrounding David Miller, are probably very hospitable to his views. When Bristol University considers its response to the outrage facing David Miller, make no mistake – the reaction of their own faculty if they respond harshly is a larger worry to them than having to deal with a few unhappy Jewish students.

But ask yourself this. If Bristol University which adopted the IHRA, still cannot deal with a case as blatant as David Miller then what value does the IHRA have? At the very least, the IHRA demands that a name be given to such breaches – and that name is antisemitism. The Miller case proves that those attacking the IHRA have little to worry about.

The responsibility of the University of Bristol

But the bottom line is that this story is all down to the University of Bristol. They chose to give him a senior role even though he had been targeting the Jewish community for a decade. If you employ a racist and he racially abuses your students – you bear responsibility. This is no different.

Bristol is failing in providing a basic duty of care for Jewish students. It is a waste of time turning to an academic who is lost down an anti-Zionist black hole and expecting some type of understanding, sympathy or apology. Miller sees our community as a fifth column with a power base that he would happily dismantle. All this is down to the university. They chose to employ him. They would not have done this to any other minority group. It is time they afforded their Jewish students the basic protections that they are legally obliged to provide.

It is time they start doing their job.