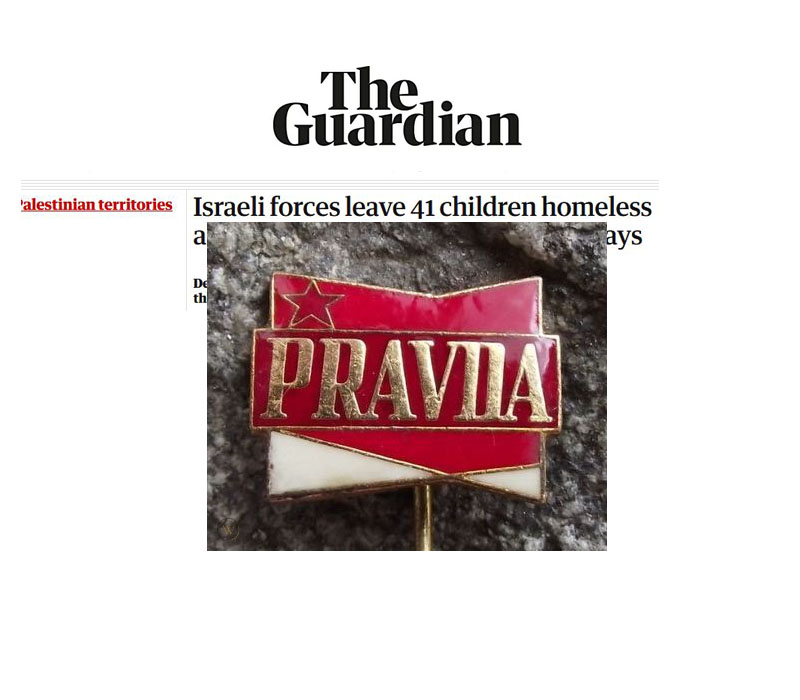 The Guardian just ran an article that could have been penned by activists at the propaganda rag Electronic Intifada. The piece heartbreakingly describes 41 children who have been left homeless by the Israeli army after their ‘village’ was razed.

The article tells us that 73 villagers lost their homes and that this is the ‘largest demolition in the past decade’. There are post demolition pictures of a bed (and a cot for good measure) lying homeless in the desert along with footage of villagers ‘rifling through their wrecked belongings’ as the ‘first rains’ fall.  The Guardian piece quickly went viral, receiving 1000s of shares in just a few hours. And with every propaganda piece that only tells part of the story and dehumanises Israel, comes the vile responses. There is a clear correlation. Lies about Israel – a demonisation of the Jewish state – logically creates hate against Zionists.

This is not about whether you agree with Israeli policy vis-a-vis the Beduin in the Jordan Valley or not. It is about newspapers having a duty to tell the truth. The Guardian knowingly pushed out an anti-Israel propaganda piece.

The Guardian and Khirbet Humsa

The village name is given as ‘Khirbet Humsa’. There is even a link to a B’tselem video inside the article that shows vehicles on a road approaching with menace – before the footage swiftly cuts to an after image of a bed and some other objects lying around after the destruction. What there isn’t – is an image of the village itself being destroyed. Why doesn’t the B’tselem video show it?

Exercise 1 – Google “Khirbet Humsa” and click on images. You soon realise why nobody is showing images of the village prior to the demolition. There aren’t any. You’ll be lucky to see pictures of a tent. And publishing images of a couple of tents would greatly reduce the impact of the propaganda story. Which raises a question. In researching this story, the journalist Oliver Holmes MUST have looked for images of the village. Yet sorely lacking from the article is ANY suggestion, this village is no more than a few make-shift tents.

If you do a quick historic search of ‘Khirbet Humsa’, you soon realise this small gathering of tents has been a politicised battleground for decades. There is nothing on this ‘village’ at all – outside of the context of this conflict. It is a fairly basic conclusion that the Guardian reporter MUST have done this ABC research. Yet his article holds back all this information from the reader.

This area, alongside the Jordanian border was declared a firing range shortly after the 1967 war. Today there are a few clans of Beduin who use the land for grazing. For decades the Israelis have been trying to move them out. They refuse to go. Israel’s military liaison to the Palestinians said it had ‘destroyed structures that had been erected illegally on an IDF live-fire zone’.

These tents are placed illegally in an army zone and because this is an ongoing story, it keeps resurfacing in the press. See these from 2015, and 2016, and 2018. Anti-Israel outlets continually run propaganda stories about how the residents of Khirbet Humsa have to leave their homes because of army exercises. None of this in the article.

The residents have taken the matter to the High Court – as is their right. They did this several times – and they lost. Why is there no mention of the legal battle in the Guardian article either? Whilst ‘Israeli military law forbids the expulsion of permanent residents’ from a firing zone, the High Court ruled that ‘Khirbet Humsa’s residents did not meet that standard’. The high Court decided that ‘the petitioners have no recognized property rights in these areas. These are intruders who use these areas for grazing’.

All omitted from the Guardian piece. Clearly the propaganda intent is to infer that these people had no legal recourse. That is a lie.

This story is clearly part of a wider argument and each side takes up position accordingly. There is history, there is context, politics and there are far too many facts being left out of the Guardian article for it to be taken seriously. All we are left with is a story about children being evicted from their homes as their village is demolished by a brutal army. A decontextualised, non-factual article that tells lies and demonises the Jewish state.

As stated earlier, it does not matter what your political views of this issue is – newspapers have a duty to tell readers the truth and let them decide for themselves. Spreading lies, hate and a demonisation of the Jewish state is the job of propaganda rags like Electronic Intifada. With each passing day the Guardian looks more and more like one of them.