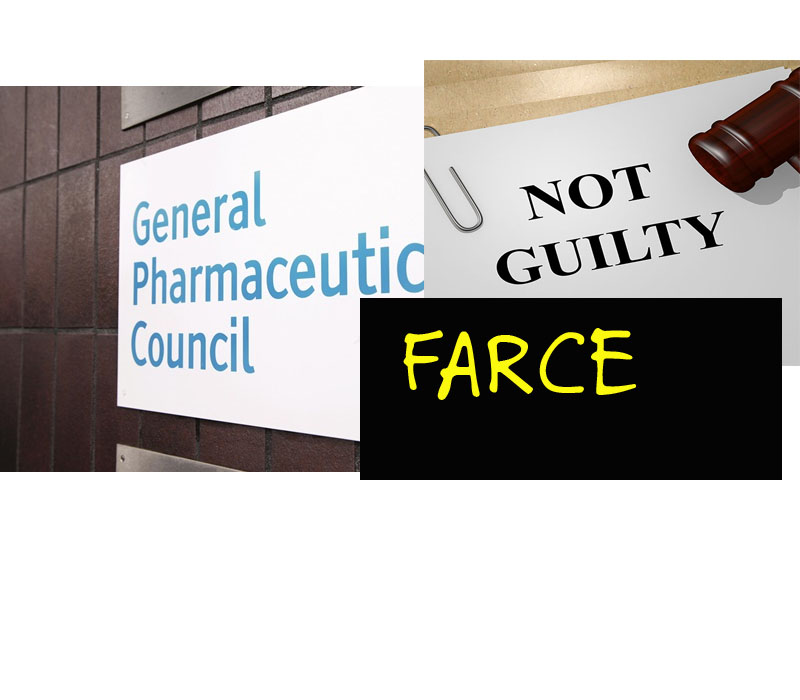 The General Pharmaceutical Council spits in the face of British Jews

Yesterday, the General Pharmaceutical Council (GPhC) spat in the face of British Jews. They did so as one of the most outrageously incompetent ‘Fit to Practise’ hearings came to a close. Pharmacist Nazim Ali had been called to defend against accusations of antisemitism. There will rarely be a case in front of the committee that is easier to decide – and they got it wildly wrong.

I rarely make official complaints, but following the Al Quds rally in 2017, I filed one with the General Pharmaceutical Council (GPhC) regarding the behaviour of Pharmacist Nazim Ali. At the pro-Iranian, pro-Hezbollah rally it was the role of Nazim Ali to ‘get the crowd going’ before the march. During his time holding the megaphone his main focus was not the fate of ‘Palestinian refugees’, ‘child prisoners’, ‘checkpoints’ or the ‘occupation’.  On that day in June 2017 he was trying to make the crowd angry about the actions of British ‘Zionists’.

Nazim Ali’s words were blatantly antisemitic. This is some of what he said – these sentences were the key phrases used by the fitness to practise committee for their deliberations:

#4 They are responsible for the murder of the people in Grenfell, the Zionist supporters of the Tory Party.

He also said the BoD had ‘blood on their hands‘, and that Zionists ‘give money to the Tory Party, to kill people in high rise blocks‘.

It is quite plain that even just based on those above, the decision is easy.

#2 The comment about ‘alleged Jews’ is clearly a reference to the antisemitic Khazar myth.

#3 The ‘imposter’ sentence is also a pharmacist publicly arguing against interfaith with 93% of British Jews.

#4 References to Grenfell and murder is classic blood libel. A tragedy happens, the finger points where it always does.

I was called to give evidence – and it took 3 long years to arrange the hearing. My recordings from the day were used for the hearing. Although under quarantine I was given an exemption and I was the first witness to give evidence. Ali’s lawyer was then allowed to ask me questions. His first was about my daughter.

For those that don’t know my daughter is currently in Israel preparing to join the IDF. Back in 2017 she had stood with me in that crowd as we listened to Nazim Ali. At the time, her thoughts were only about going to university in the UK. I cannot be 100% sure that what unfolded in the UK during 2016-2019 was responsible for my daughter’s change of heart – but it is hard to believe she would have gone otherwise.

Because the atmosphere in the UK had deteriorated for British Jews and my daughter had decided to leave for Israel – my loyalty was being questioned. The lawyer asked a few more questions and within about 15 minutes it was over. The time had come for the members of the panel to ask any questions – they had none. The prosecuting lawyer had none either.

Whether I accept it or not I am considered by many involved as an expert on issues of antisemitism – and the panel did not ask me anything. I won an award as one of Algemeiner’s J100 (top 100 people positively influencing Jewish life). My Twitter account that focuses on antisemitism has over 50,000 followers. It was my research that opened the path to exposing Labour’s antisemitism crisis. My work on antisemitism has been referenced in every major UK newspaper and many globally. Yet this panel – which needed to deliberate on issues of antisemitism could think of nothing relevant to ask me? Nothing? Instead, I was being smeared by classic insinuations of dual loyalty. I was free to go. At that moment I knew Nazim Ali would get away with it.

Due to quarantine I was only able to attend the first hearing but Jonathan Hoffman did what he always does and sat through every minute of the seven-day hearing. Hoffman also gave evidence. Yesterday, the decision was reached – Ali’s comments were not deemed antisemitic – and although considered ‘offensive’ he received nothing more than a warning.

If we allow this decision by the General Pharmaceutical council to just stand, we may as well pack our bags. It is a clear sign our days in the UK are numbered. The panel (Alistair Cannon, Raj Parekh and Claire Bonnet) had no visible expertise on antisemitism at all – nor did the prosecuting lawyer. And what is worse is that although it was offered to them – they didn’t want it.

After Jonathan Hoffman gave his evidence, he also was not asked any questions by the panel. This means that the panel felt there was nothing relevant to the case that Jonathan or myself could offer in terms of knowledge – that they did not know already. The only two Jewish witnesses – and they had nothing to ask of us.

So who was deciding whether or not Nazim Ali was being antisemitic or not? On what grounds? With what expertise? The man literally spread antisemitic myth, blamed a tragedy on us and spoke about our ‘genetic code’.

I realise I have just participated in a show trial. One that was always going to find him innocent of the antisemitism charge. There was no sign at all – at any point – from any of the panel members – that they had any interest in what was or was not antisemitism. This hearing also shows you how far antisemitism will be allowed to spread without consequence.

Whilst both Jonathan and I were considered ‘credible’ the panel also believed us both to be ‘not entirely impartial’ – the reason – we are Jewish. I cannot imagine a tribunal in the world in which a man who is black would be openly considered ‘not entirely impartial’ because of the colour of his skin. This is an unforgivable and shameful error. No wonder they did not feel the need to ask us any questions.

If we accept this type of error in justice – we may as well just pack our bags now. If we want to stay – we really are going to have to fight.