This piece on the cruel sewer of the far-left is not for the faint-hearted. The article contains sickening responses to the news of the passing of Lord Jonathan Sacks, the former Chief Rabbi. My research is here to provide a historical record. As such, this piece, however difficult to write or read – needed to be made public.

If you are easily offended or upset, I strongly suggest you give this one a miss.

The cruel and sickening responses

It is easy to go and find some anonymous troll making an offensive or cruel comment. It is for others to engage in distortion and propaganda. What is important to note about this blog is that these are not trolls or bots. These are real people and most have held or hold key positions in anti-Israel activism or other political circles.

I start with Mick Napier the chair of the Scottish Palestine Solidarity Campaign.

That vile post by Napier was liked by Jacqueline Walker – ex Vice-Chair of Momentum.

At the time of writing, Napier’s post has received around 50 likes and has been shared 17 times. Walker, not content in simply liking a grotesque post about Lord Sacks, set out to post some comments on her own timeline.

Moving south to our own Palestine Solidarity Campaign, we arrive at the Portsmouth Branch and a post from Jenny Flintoft:

What is interesting about Flintoft’s post is that it highlights how uttterly delusional the Corbynite bubble is. She references JVL (Jewish Voice for Labour), as if choosing a Chief Rabbi of the JVL type is even possible. They are virtually all atheist. Most members of JVL would not know where their nearest synagogue was. I am not aware of any who would know what to do if they were to find it. Flintoft’s post is written by someone who does not live on this planet.

Cruel face of the Labour Party

Whilst reading these posts, along with 100s of vile comments that were deleted by the busy admin in other unofficial Labour Party Facebook forums, I had to keep reminding myself that these were ‘Labour Party’ people.

Corbyn’s cult often pushed themselves as ‘kinder gentler politics’. Meet Angie Stack. Stack was once a Chair of Governors of a primary school. Highly active politically, Stack was Chair of Bromley and Chislehurst Labour Party and Chair of her branch of Unite.

This is what she had to say:

Koser Saeed uses the account name ‘Anya Zenn‘ on Facebook. Koser Saeed is the Editor of Spotlight Newspaper. This is how She responded:

Keir Starmer posted condolences on Twitter. Just scanning through the comments tells us everything we need to know about the continued existence of antisemitism in the Labour party. Many of these cruel comments are from Labour people. The hate is fully embedded in the party now, and I am not sure it can be salvaged. ‘Kinder, gentler, politics.’

All told I recorded and archived cruel and disgusting comments from over 270 different FB accounts. There is no need to reprint them all here. This is an example of just one comment stream: 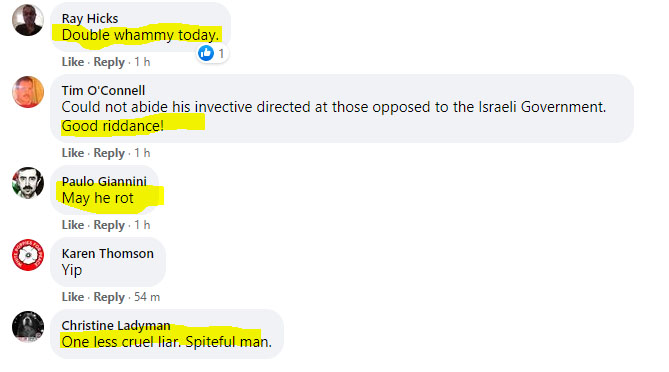 Seymour Alexander was for years the main photographer at events organised by the Palestine Solidarity Campaign. This is how he responded:

The only good Zionist….

And for those who still have doubts about the true intention of anti-Zionists. I can end with the words of Bruce Levy:

He believes that the only good Zionist is a dead one. And for every ‘anti-Zionist’, there is one who is not even bothering to mask the hatred. When I posted a tweet about Jonathan Sacks – this was one of the responses I received:

This is the face of the hatred we face. We must never forget it.

We need to battle back against those who seek to revise history and expose antisemitism. I fight when others don’t.  If you can, please consider making a donation.

129 thoughts on “The cruel sewer of the far-left. Not for the faint-hearted”