Maybe we need to be thankful to the media and organisations such as Amnesty International, that in their rush to demonise Israel, they sometimes inadvertently expose the truth. Here is the story.

The media and the biggest demolition of the decade

Last week *MANY* of the major news networks ran headlines about ‘the biggest demolition in a decade‘.

Predictably, obsessive NGOs who spend their time demonising the Jewish state, sprinted to publish their condemnations:

And those tiny, attention hungry, fringe, left-wing Jewish groups, the ones who spend all their time demonising Israel and pushing Jewish youth ever closer to the anti-Zionist cliff – soon followed suit:

It should be noted that both of these extremist groups took the time to mark the passing of the PLO’s propagandist Saeb Erakat, yet neither had a single word to say when news broke that the former Chief Rabbi, Lord Jonathan Sacks had died. Their priorities are clear.

Finally of course, we had angry responses from politicians. People who cannot hide their hatred of Israel, no matter what else is taking place in the world.

The story is there in black and white. Israel destroyed an entire village, engaged in ethnic cleansing and undertook the largest demolition in a decade as it brutally displaced villagers who had been living in their land for centuries. All of the outlets ran exactly the same story, based on the same deceptive press release.

The UN – the power behind the lies

The source of the report was B’tselem, a toxic NGO that lost its moral compass decades ago. The fictional tale was soon given international legitimacy by UN OCHA – The United Nations Office for the Coordination of Humanitarian Affairs and their coordinator, Yvonne Helle.

This body is often the starting point of anti-Israel rhetoric. The UNOCHA regurgitate the propaganda of anti-Israel NGOs and give outlandish lies a seal of UN approval. It is like a disinformation clearing house. A statement by this UN department is considered as ‘gospel’ when in reality it is little more than a propaganda machine. UNOCHA is not impartial, instead it eagerly spreads disinformation and facilitates funding for toxic anti-Israel NGOs, including those that promote the BDS boycott movement.

Everyone with an ounce of sense knows that these UN bodies are anti-Israel to the core. So why are the BBC and the Guardian acting as if they are impartial observers? It is like pretending the UN Human Rights Council has merit. These are editorial choices these media outlets make and produces blatant journalistic deception.

The removal of tents

We know all of these reports are lies. Last week I reported on the deception. Since then both Honest Reporting and CAMERA have produced articles exposing the depth of media lies.  Israel advocacy movement also published a video dealing with the deception and focusing on the outrageous ‘ethnic cleansing’ claims of Ilhan Omar.

We all know there was no village. Instead there was a few tents, an outpost, placed illegally inside a military firing zone.

This is an illegal outpost. Put up provocatively in a military area. Military land v sheep is not new or restricted to Israel. There are examples the world over. Farmer (Romania), finds good grazing land – builds without permits – has to move on. Yada yada yada. Farmers (UK) need to move off land when firing exercises take place – yada yada yada. Military orders (Sth Korea) expel an ACTUAL village (not imaginary one) – yada yada yada.

The misreporting raises another issue. This from the Belgian Ministry of Foreign Affairs:

Apparently these people receive funding and supplies from the EU. How on earth are members of the EU justifying sending funding to illegal outposts in Area C – an area under full Israeli control? This is the relevant question our media will never ask.

How our irresponsible media support the conflict

Here is an ABC question.

If every time that a Palestinian illegally sites a tent – even in a closed military area – Israel receives negative headline press for removing it – what do you think the outcome would be?

Hence, because our own media are tripping over themselves to publish any disinformation about Israel that they can, they enable and empower those seeking to toxify the atmosphere even further. Would these families still have deliberately sought out this ongoing confrontation (which they did) if the media were not eager to print this story?

We know that there are anti-Israel provocateurs looking for trouble in areas such as the Jordan valley. Just as we are aware the livelihood of some NGOs is dependant on frequent tensions. These are all shady groups with little or no accountability.

Our media are different. As there are real consequences to the swallowing of lies and anti-Israel propaganda that openly encourages further actions of the type – we should hold them to account for the part they play. This relationship between an anti-Israel media and willing actors inside Area ‘C’ is rarely fully understood.

But first they should apologise

But we need more from the media than shooting straight, Israel should receive an apology for years of anti-Israel spin. Because here is the problem. If the removal of seven tents from an illegal site is officially ‘the biggest demolition in a decade’, then the entire media has been grossly misreporting Israeli actions for at least ten years. If seven illegal tents in a firing range is the best they have got – then looking back over a decade of headlines of the BBC, Amnesty, the Guardian and other anti-Israel outlets is to scan a horizon full of lies, disinformation and demonisation. 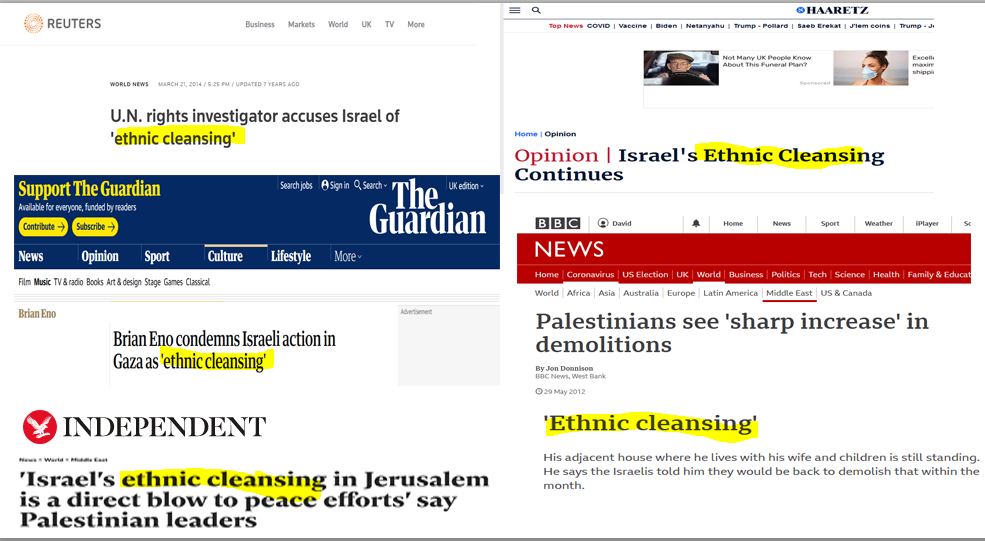 Ethnic cleansing? How can there be ethnic cleansing if the largest demolition in a decade is seven tents? This insults all victims of ethnic cleansing everywhere. Imagine how the Rohingya feel or the Kurds, when the term is so openly abused in this fashion.

The media reported that the removal of seven illegally sited tents was the biggest demolition for a decade. That’s the real story. So maybe we should be thankful these anti-Israel media outlets have finally let the truth slip out – even if it was unin*tent*ional.

237 thoughts on “Amnesty and the left wing media, finally spill the truth”