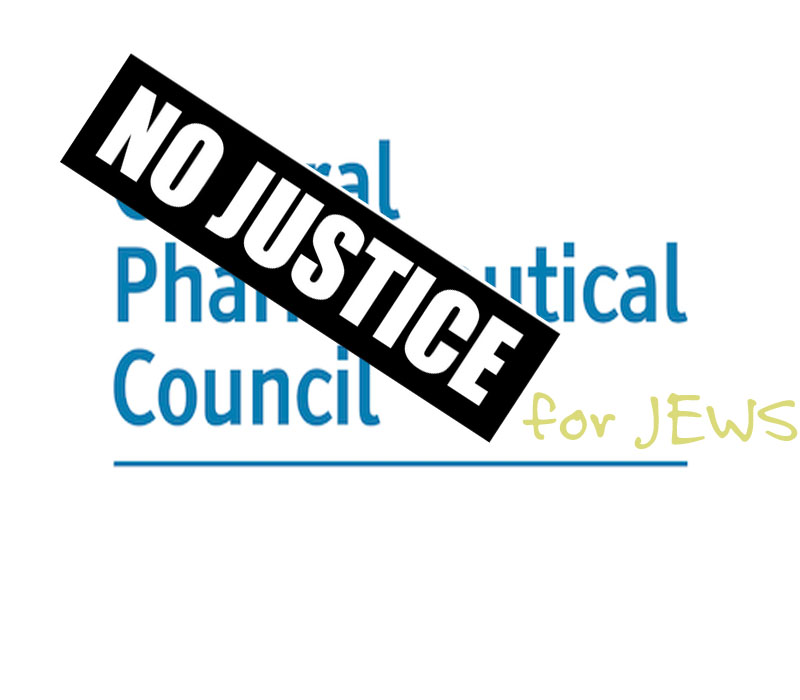 There is no real justice for Jewish people in the UK

Three years ago I was present at the pro-Hezbollah Al-Quds rally in London. In the process of whipping up the crowd to prepare them for the march, the leader of the rally, Nazim Ali, made several blatantly antisemitic statements over a loudhailer. After it became known that Nazim Ali was a pharmacist, complaints were made to the General Pharmaceutical Council. They took three long years to even arrange a hearing. Last week they published their determination – that the four test statements they had selected, whilst offensive, were not antisemitic. An embarrassing joke of a finding and a slap in the face for all of us. The obvious conclusion from this story is that there is no real justice for Jewish people in the UK.

Justice and the facts

The undisputed facts of the case are these:

Nazim Ali is a pharmacist and is also a Director of the Islamic Human Rights Commission. The IHRC is an extremist group ‘inspired by the worldview of Ayatollah Khomeini’. On the last Sunday of each Ramadan, they hold a demonstration on ‘Al Quds’ day, an Ayatollah designed, pro-Hezbollah, pro-Iranian march through London. Until proscribed in the UK, Hezbollah flags were ever-present at these rallies. Nazim Ali has been the voice of the Al-Quds demonstration for several years.

At the event in 2017, and before the gathered protestors began to march, Nazim Ali made several antisemitic comments about Zionists. Some examples: Ali claimed Zionists were not real Jews, he blamed them for the Grenfell disaster, stated that they genetically need to ‘occupy’ and suggested British Rabbis have blood on their hands.

Justice fails in the findings

The publication of the findings of the ‘Fitness to Practise’ hearing confirmed all our worst fears. The entire process had been a badly handled, incompetent affair, that resulted in a near total whitewash. The Committee decided that whilst offensive, the words of Nazim Ali were not antisemitic.

There are several *major failures* in the determination. These are the two that I consider the most important:

Antisemitism – In deciding what was and was not antisemitic, their Legal Adviser had provided them with the dictionary definition. The IHRA definition was included by the Council in the bundle of papers ‘for guidance’. In assessing whether a comment was antisemitic, the Committee decided it would attempt to judge the view of a ‘reasonable person’, with knowledge of all the facts and context. Someone with ‘no particular characteristics‘ (ie not Jewish).

Impartiality – both myself and Jonathan Hoffman were not considered impartial. They mentioned that I had just returned from a visit to Israel along with the fact my daughter recently volunteered for the Israeli Defence Force. They concluded that this meant I was not an ‘entirely impartial observer‘. For Jonathan they stated that he had described himself as being ‘of the Jewish faith’, before mentioning his public order conviction and the fact he had visited Nazim Ali’s pharmacy as the reasons why he too, was not fit to be described as a ‘wholly impartial observer‘.

They found we were of ‘little assistance’ in reaching their decisions (page 52).

The bitter pill we are forced to swallow

Having read the determination twice, it is difficult to overstate how atrocious the decisions were. I want to use this example – taken as to why the comment about ‘European alleged Jews‘ was found to be not antisemitic:

The Committee concluded that most reasonable people would not find anti-Semitic a part of a comment they could not understand when it appeared to make no sense. (page 56).

In other words, because Nazim Ali had been unable to explain clearly why he had used the phrase and because the Committee considered a reasonable man would be unable to decipher the comment – it therefore could not be considered antisemitic. This is absolute incoherent and absurd poppycock. What were they smoking?

All this shows is that the Committee had neither the expertise nor knowledge to do anything more than conduct a show trial. Nazim Ali blatantly stated that he regards approximately 93% of Jewish people as not Jewish (2015 survey, 93% consider Israel a part of their Jewish identity, 90%  support Israel’s right to exist as a Jewish state). How is this not a clear attack on Jewish identity? That even after three years of preparation, they still did not possess the basic understanding of modern antisemitic tropes (and the accusation about fake European Jews is a favourite of modern antisemitism) is nobody’s fault but their own.

Imagine a racist making an offensive comment about black people, using well-worn slurs to which a black person would be highly sensitive. Then imagine a committee led by white folk dismissing the claim, simply because it had neither the knowledge nor the understanding to comprehend what the argument was about. Farce? That doesn’t even begin to cover it.

The ignorance of the committee

From start to finish this hearing failed to deal with the problem seriously. It rejected offers of expert advice on antisemitism. On one of the most highly charged issues of today it was handed a dictionary and told to get on with it.  The Committee clearly felt they knew better.

There was no proper guidance on the anatomy of the Jewish community, which meant that the Committee was left evaluating everything under the illusion that the community is split between ‘Zionists’ and ‘anti-Zionists’. Once they had fallen into the neatly created rabbit hole provided by one tiny extreme cult called Neturei Karta, any chance of a real hearing was doomed.

As someone who is well versed in all the arguments, – reading the determination is like reading the deliberation of a man from Mars. The Committee may have meant well – but their own exaggerated sense of self-importance destroyed any chance they ever had of reaching a proper conclusion. Seriously. ‘It cannot be racist because we personally didn’t understand it‘ – on what planet is that justice?

Listen to the Jews

They had two Jewish people in front of them, but they didn’t ask either any probing questions on either Zionism or antisemitism. The Committee clearly felt they knew all they needed to. In the end they dismissed the *ONLY* real evidence they had – because those who provided it were not considered ‘impartial observers‘. The reason for the dismissal? We were Zionist Jews.

The Committee’s finding suggests that any victim would be of ‘little assistance’ to them because a victim has an interest in the case. They don’t want victims, witnesses just get in their way. This is a Committee that knows it all already.

The injustice of impartiality

In August 2020 my daughter made Aliyah to volunteer in the IDF. As any parent would, I went to see her when I had the chance. And here is the first problem with the Committee dismissing my evidence – in June 2017 when the event happened – I hadn’t been to Israel in 11 years and my daughter was a 16-year-old who was contemplating A-Levels and university. In other words the excuses for them dismissing the evidence I provided in 2017, hadn’t yet occurred.

The same can be said of Jonathan Hoffman. His altercation with Sandra Watfa the Holocaust denier only occurred in 2018. Similarly, he only visited Nazim Ali’s pharmacy because of the events that had already occurred in 2017. How on earth can you justify post-dating a person’s bias?

In truth the problem was that we were both Jewish. As the committee clearly stated – only a non-Jewish person is ‘reasonable’ to identify what is antisemitism. These people live in the Dark Ages.

Exploring the problem with bias

The Committee never bothered to understand antisemitism and couldn’t find the time to learn a little about the Jewish community and Zionism. Now I want to explore its reasoning for considering my evidence of ‘little assistance’ even further. They had a problem with where I went on holiday. So is it legitimate to ask where they went on holiday? Do Judges and panels and arbitrators need to complete a ‘Where Have You Been on Holiday?’ form before being deemed acceptable?

What about my daughter’s choice? Am I responsible for that? Does each of the members of the Committee need to explain exactly what each of their family members do prior to being deemed acceptable? My daughter, in the three years of Corbyn, decided that her immediate future lay outside the UK – this is an indictment of what the UK did to British Jews, it has nothing to do with me.

Once you start down this road – you end up in chaos.