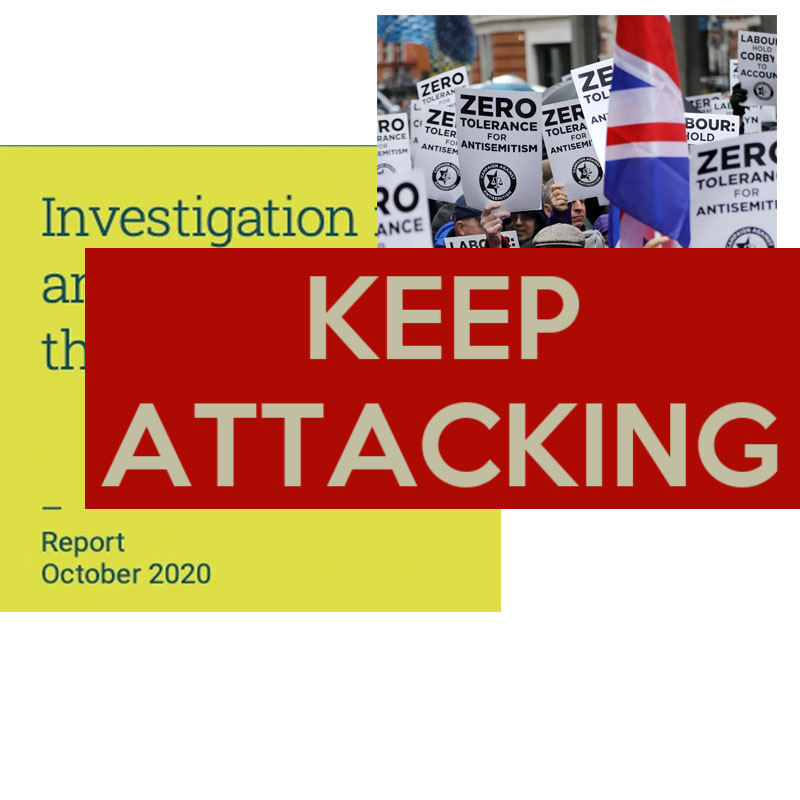 Yes, the EHRC is out – be ready to fight again at dawn

I have stayed away from Labour antisemitism for a while because whilst the EHRC report remained ‘pending’ there was nothing I could do or say that would make a difference. Yesterday, 29 Oct 2020 – at 10am, the report was published.

On Monday I gave evidence in the tribunal against Nazim Ali.  For those that don’t know, Nazim Ali is from the Islamic Human Rights Commission and each year he leads the Hezbollah friendly, pro-Iranian Al -Quds march. The tribunal is related to his public comments about ‘Zionists’ being responsible for the Grenfell tragedy. As I am currently quarantined, I was only given an exemption to provide my statement and have been unable to attend the rest of the hearing. From those who are there I hear Ali relied on the ‘some of my best friends are Jewish (from the Neturei Karta)’ defence. This issue of ‘some Jews’ being used to provide an umbrella for a hatred towards Jews must be addressed and the failure to grasp this properly in the first place is what allowed the entire Labour party to walk willingly into the antisemitic sewer.

Almost every Jew is a Zionist. Surveys tend to suggest that number hovers around 90%. The non-Zionist element of Jewry is therefore small. Even smaller is the active opposition to Zionism or ‘anti-Zionist’. Anti-Zionists are split into two key groups. The Marxist left and a fringe sect in the ultra-religious right. Given what we know, it is probably reasonable to conclude each of these groups is probably somewhere between 0.5- 2% of Jewry.

Nazim Ali hides his hate behind a single tiny ultra-orthodox sect. Ali claims he cannot be antisemitic because he has found a few ultra-religious Jews who have built themselves around opposition to Zionism. It is astonishing that this clearly false argument has actually worked in some quarters.

The hard-left use Jewish Voice for Labour in the same way. Holocaust deniers, Rothschild conspiracy theorists and white supremacists all suggest they cannot be antisemitic because fringe groups waving ‘Jewish Network’ banners hold hands with them at events. This strategy works in the mainstream within outlets such as the BBC, Sky News and the Guardian. It shouldn’t.

Using fringe Jews with different beliefs to attack other Jews is still a form of religious persecution. Zionism is a fundamental part of our Jewish identity. This holds true for over 90% of Jews. We have a right to demand this discrimination stops.

Raining on the EHRC parade

I don’t want to rain on the parade, but I am not celebrating the publication of the EHRC report. It is true that this report provides a historical record of the failure of the Labour party to protect Jewish members and shows how swiftly a movement can become infected with antisemitism. Yes, it is important and welcome. But those who think this is the end of the battle are sorely mistaken.

The Labour Party was not dragged into the antisemitic sewer. It went willingly. They exiled the heretics, took up arms to fight the devil (Zionists), held their false messiah aloft – and joyfully sang his name. The key disciples received standing ovations wherever they went. We cannot know how much damage was done, nor how long it will take to undo it. As I write the Labour party is heading for open civil war. The unions are almost a united front against us. The antisemitic incubators inside the universities are alien turf for us and protected by the ‘Iron Dome’ of academic freedom.

‘Jezza’s army’ also had their Jewish umbrella. ‘Jewish voice for Labour’. These fringe Jewish Marxists were given multiple platforms, welcomed inside the CLP’s and used as a cover to attack the British Jewish Mainstream. Yesterday, even after the EHRC report came out, the BBC rolled them all out. There is no excuse for this. The EHRC report proves that ‘at best’ this Jewish fringe are delusional and clueless. At worst they are deliberately undermining the fight against anti-Jewish racism. This is now historical record. How on earth can the BBC justify still having them on?
Because the war is far from over. In fact, it may well be just beginning.

In 2017 my daughter was just 16 and had just sat her GCSE’s.  At the time, the only conversations we had on her future where about which university she would choose to go to. In 2019 she changed direction completely and has since volunteered as a lone soldier in the Israeli Defence Force. She is no longer living in the UK.

I cannot be sure that the Labour Antisemitism earthquake that hit British Jewry during 2018-2019 is responsible for my daughter’s change of heart, but nor can I dismiss the possibility. In Jewish households throughout the UK we all felt the roots beneath our feet shake. Who is to say what long lasting effects this has had on our sense of the UK as our ‘home’?

The EHRC fallout – Jezza – your part in his downfall

I was reporting on antisemitism in the party long before most. In Autumn 2015, after Corbyn’s leadership victory, it felt like a lonely and uphill struggle. Few wanted to see the truth. We are diaspora Jews – we do not like to be seen to be rocking any boats.

It took far too long for some in the community to wake up and realise the dangers that antisemitism on the left poses. The problems that pro-Corbyn elements presented for us as Jews in the UK. There was ignorance about how antisemitism has masked itself and naivety over how quickly it spreads. Until spring 2018 a sense of ‘it will pass’ or ‘can’t happen here’ was still the order of the day.

For now, lots of people are climbing to the top of the hill, metaphorically holding the head of Corbyn aloft and crowing about how they (or their organisation) are heroes. It is my hope that this pause in fighting to chest-beat and celebrate is a brief one. Does our community possess both the understanding to realise the battle is not done and the courage to accept the boat must be rocked even further? I am not sure it does.

We must turn our attention to campus. The unions must also be fought. And on the political front, Jezza’s army – that sees the EHRC only as the establishment protecting itself – is still out there – and it is far larger than it was in 2015. Many local Labour Party groups remain toxic and hostile. Does anyone really believe that the antisemitic Palestine Solidarity Campaign – which actively spreads Jew hatred – will be unwelcome at the next Labour Party Conference?

Celebrate if you must, but make sure you are ready to fight again when dawn comes.