Last Friday 47-year-old schoolteacher Samuel Paty was butchered and decapitated near the school at which he worked. His ‘crime’ was to teach his students about free speech. There is a horrific difference in this terror attack that is not being fully digested. This was a community effort. Some Muslims at the school were offended and a protest was launched. A parent brought in an ‘expert’ to help fight the blasphemous teacher. A fatwa was issued and a punishment for blasphemy was handed out. Worse still – despite statements of solidarity with the victim that inevitably filled the political chambers – the message was clear – and teachers all over France received it. Blasphemy in France is a crime punishable by death.

Many writers won’t touch this subject – they are too nervous in case they make a slight mistake that will be used against them. They fear they’ll be shouted down as an ‘Islamophobe’. This in itself is indicative of the problem and shows how our rights to free speech and to defend ourselves are being removed from us. A teacher was brutally murdered for doing his job. Earlier this year a 16-year-old girl in France needed police protection for criticising Islam. We have to talk about this.

The Paris attack is different

Why is this terrorist incident different? In attacks such as the Manchester bombing, 7/7, Nice or even with the murder of Lee Rigby, the specific victims were random. There was nothing random about this attack. This was the application of Islamic law on the streets of Paris. Which is where we arrive at our first hurdle- the western PC reflex to terrorist attacks by radical Islamic Muslims is to publicly state that it is nothing to do with Islam.

But what may hold some weight (I am not saying it does) when a nutcase with ISIS ideology filling his head detonates himself in a crowded venue – does not hold at all when a particular target is butchered because of blasphemy.

Simple fact : It is an argument within Islam. Those Muslims who say a blasphemer must be killed are arguing Islamic law just as much as those who say it doesn’t.

Those who say this is nothing to do with Islam should consider this – if the teacher had done this in Pakistan, Afghanistan, Iran, Mauritania, Nigeria, Somalia or Saudi Arabia the same punishment (death) may well have been handed out – in a state sanctioned killing. In places such as Jordan, Egypt, Algeria, Syria, Libya or the PA areas, he might just have spent a lengthy time in Jail. But the fact is this – one way or another all Muslim majority countries have criminalised blasphemy. All of them.

Ask yourself this question – how many devout Muslims have you spoken to who think Charlie Hebdo did nothing wrong at all?

What took place in Paris is not out of place in Pakistan. In Pakistan at least 51 people recently accused of blasphemy, never made it to the end of their trial. They were killed in extrajudicial murder. Just four months ago, Tahir Ahmad Nasim, a US citizen was shot dead inside a courtroom as he stood trial for blasphemy. The person who smuggled the weapon into the court and gave the weapon to the killer was a lawyer. The large public protest that followed was not for the victim but in support of the killer: 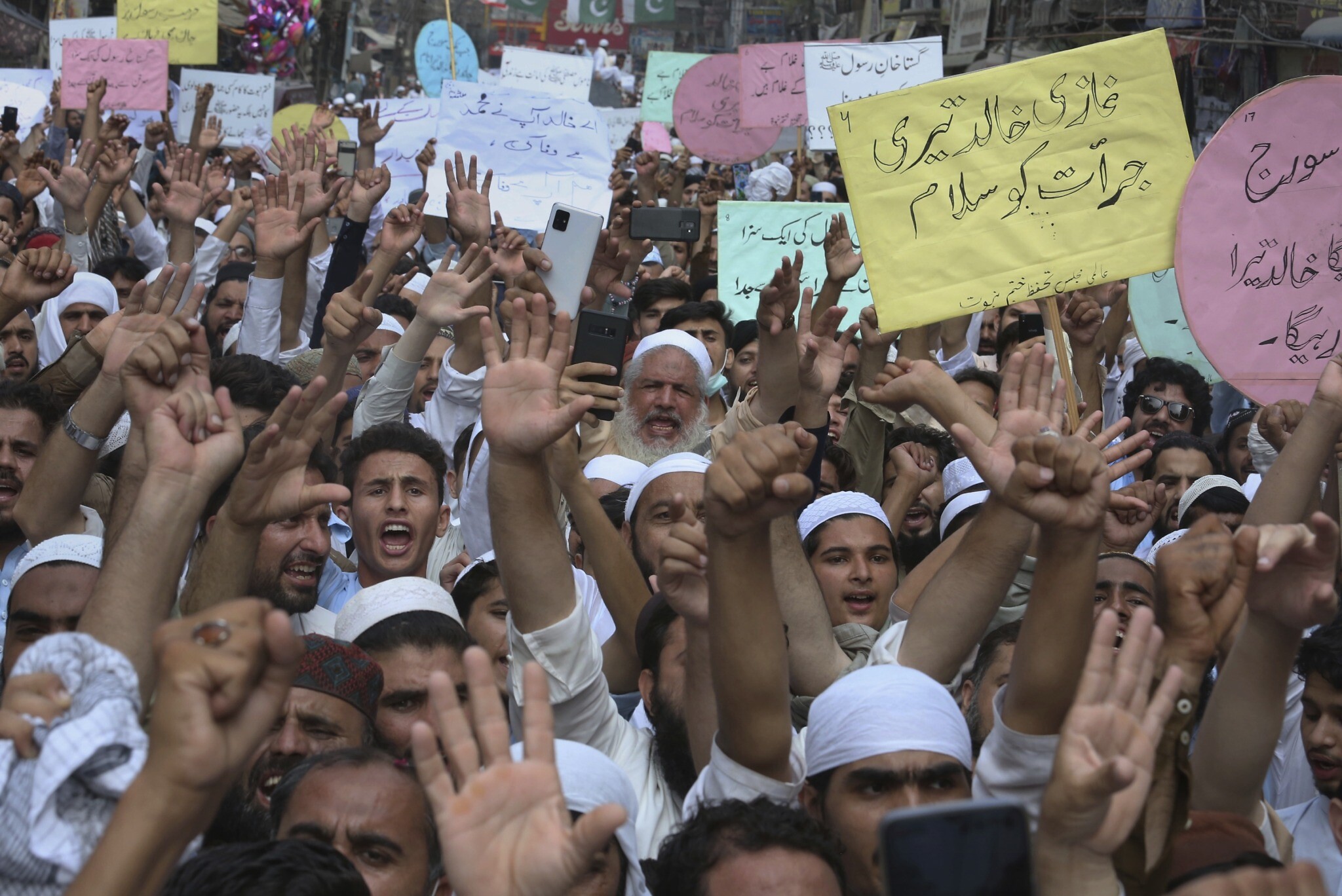 Samuel Paty had done everything a teacher should do. He taught of the importance of free speech. He even told Muslim students that might be offended that they could leave the class. None of this mattered. In sharing the caricature of Muhammad from the satirical magazine Charlie Hebdo, Samuel Paty had signed his own death warrant.

The 18-year-old terrorist, Abdoullah Anzorov, was shot dead but he was no lone wolf. Since the attack about 15 other people have been arrested, including the father of one of the students. Apparently, after the moral and civic education class took place, a parent of a female student filed a complaint with the police, claiming Paty had ‘disseminated pornography’. His daughter did not even attend the class. Then protests took place at the school and online. One parent had turned to a well-known radical Islamist, Abdelhakim Sefrioui for help. On the day of the murder, the killer stood in wait outside the school and ask some students to identify the teacher – he paid them £270 for their help.

Abdelhakim Sefrioui is a well-known extremist. Here is a picture of Sefrioui speaking at an anti-Israel event in 2012: 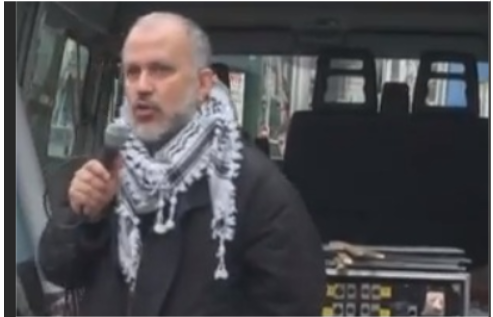 Radical Islamic ideology is one of the key pillars of anti-Israel activity but is almost never referenced as such in mainstream media. That 2012 anti-Israel event – with an extremist speaker who thinks blasphemy should be criminalised was no doubt misreported as a ‘human rights protest’. ‘Progressive’ elements in the west hold extremists aloft – give them platforms and sometimes even idolise them.

The deception, deflection and lies

For most people in Europe, the attack was a horrific event that has left them shaken. This was a teacher, doing his job and educating his students. For doing that he met a brutal end. But not everyone felt that way. Roshan Salih is the Editor at 5Pillars, a British Muslim news website. Salih laid the blame on Charlie Hebdo: 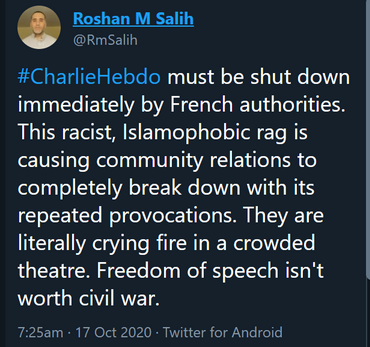 Since the attack Salih has produced a stream of tweets attacking France. Then there are those who think it was a false flag. Ahsen Khan appears from his profile to be a British Muslim:

The classic strategy remains delusion and denial – the ‘this is not Islam’ approach.

The truly spectacular comments are from anti-Israel activists. They leave little to the imagination:

This terrorist attack was the imposition of Islamist blasphemy law in Europe. Whilst many Muslims do not support the killing, it is also true many do think that blasphemy should be criminalised (and is therefore punishable to some degree). In return, so as ‘not to offend’ – progressives in the west play this down or ignore it. Just as they ignore the antisemitism that is rife in Muslim communities. We make allowances – and we shouldn’t.

If you walked onto Sheffield Hallam campus waving an Israeli flag – you would soon face hostility and serious opposition. Yet the Pakistani flag can be freely and proudly displayed on the campus grounds: 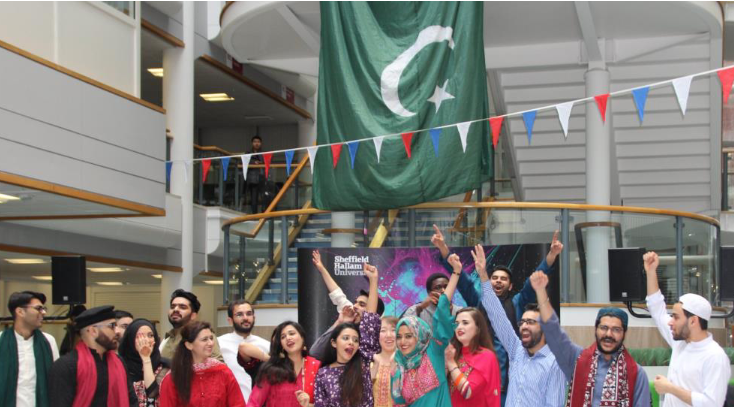 This question lies at the heart of this issue. Why? How is it that we have allowed anti-Israel activity to flourish, when it is obviously duplicitous and rooted in a religious and antisemitic fervour. Islamic societies on campus are often at the front of anti-Israel activity. This is not a ‘human rights’ issue but an imposition of Islamist ideology or discrimination on university grounds. Yet not a single progressive outlet will call them out on it. Instead they ‘play along’ and pretend they don’t see the truth. Or in an even more dangerous turn of events – they are actually supported by Marxist academics as part of their own anti-Imperialist battle. Perversely – the shutting down of the Jewish voice and the no-platforming of pro-Israeli opinion is presented as a case FOR free speech.

This weakness poses a real danger to all of us – not just the Jews. What happened to Samuel Paty was a result of ignorance, stupidity and cowardice. There should be no tolerance – none – for any type or form of Islamic ideology that does not conform to the freedoms and tolerance expected of citizens in our nations. That is the message we should be delivering loud and clear. Our failure to do this has made Europe a breeding ground for extremism. The parents actually thought they had a strong enough position to raise complaints with the school. That misplaced empowerment is our own fault.

Last year, the Foreign Minister of the UAE Sheikh Abdullah bin Zayed Al-Nahyan told us that our own naivety will be our undoing:

We really should be paying more attention. Many lives may depend on it.

393 thoughts on “The decapitation of Europe’s freedom”