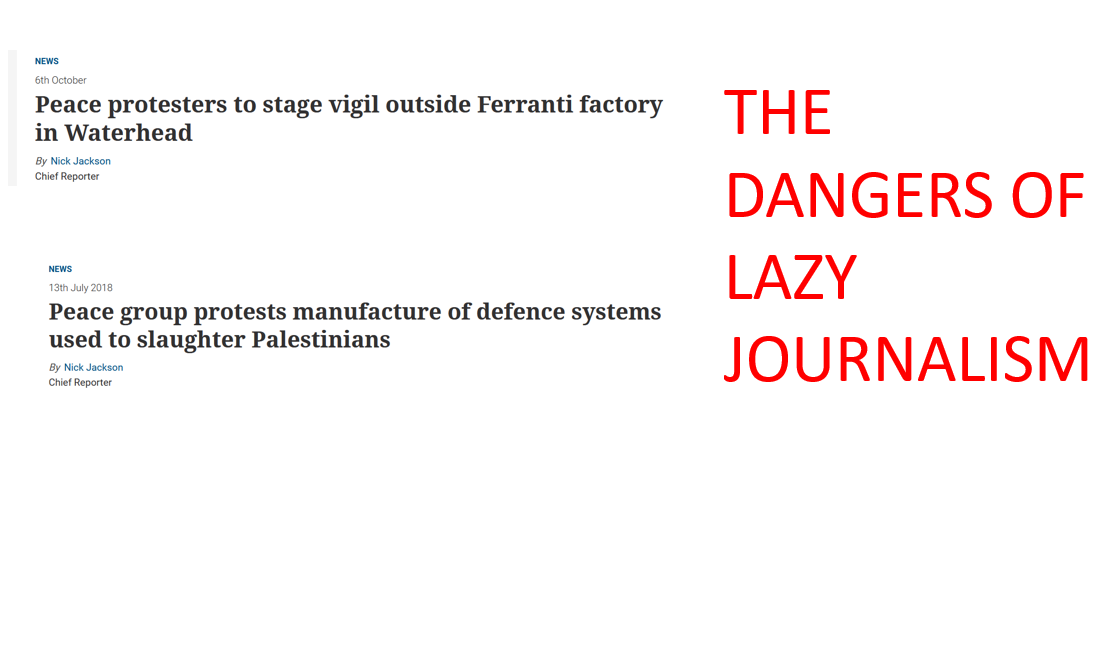 The greatest enemy of truth telling is lazy journalism

The greatest enemy of truth-telling about the Israel / Arab conflict is lazy journalism. Everyone knows Hezbollah are the bad guys. but as you work your way down the ladder of hate, things become progressively more difficult. At the grassroots level of anti-Israel street activism, the lines have become so sufficiently blurred through lazy journalism that you really need to unravel a maze of inaccuracy to get the true message across.

Any reporter writing about such activity needs to do his research. Failing to do so inevitably means the media outlet will badly misinform their readers. Outfits like Palestine Action or the Palestine Solidarity Campaign are not instantly recognisable as a hate group solely because journalists are not doing their job properly.

Organisations such as Camera and Honest Reporting spend all their time fighting back against errors in reporting on Israel. Whilst sometimes the culprit is a hostile journalist, many of the worst cases, come down to simply laziness.

Lazy journalism is an enemy of the truth

As an example I want to use a recent article in ‘the Oldham Times’. The Chief Reporter of the OT is Nick Jackson. As local groups in the region organised a protest outside a factory connected to Israel defence company Elbit, Jackson penned this article for his paper:

This ‘Peace Protestors’ headline was not the mistake of a lazy editor. In his opening paragraph Nick Jackson refers to the protesting groups as ‘peace campaigners’.

The article focuses on ‘the Oldham Peace and Justice Group’. The first mistake is that the OPJG are the only group mentioned in the piece. A quick look at the event page shows other co-hosts – Manchester Palestine Action and the Manchester branch of the Palestine Solidarity Campaign. In the ‘peace group’s own report on the protest, Halifax friends of Palestine and Liverpool friends of Palestine are also mentioned. The five groups managed to bring about eighteen people between them.

This is not the first time this has happened in the Oldham Times. In 2018 Nick Jackson made exactly the same mistake:

The headline is outrageous and the comment about ‘slaughter’ clearly stands out as vile and false opinion being presented as fact. But the problems run much deeper than this. Any reporter calling people ‘peace campaigners’ must surely look at the group’s activities. After all, I doubt Nick Jackson would refer to North Korea as a democracy, simply because they  have the word ‘democracy’ in their official title. In the 2018 article Nick Jackson bases his piece on the words of ‘Adie Mormech, a ‘protester and street theatre performer’. In the real world Adie Mormech, who goes by Adie Nistelrooy on Facebook is a hardened activist from the International Solidarity Movement and a member of the thuggish group Palestine Action.

Nistelrooy also hangs out in the sewer that is Palestine Live, mixing it up on the street with well-known antisemites such as Elleanne Green.

The Oldham ‘Peace and Justice’ group do not state they are explicitly an anti-Israel movement, but it seems that the Israel conflict is the only one these ‘peace loving’ people of Oldham have heard of. Of the 100s of posts made in 2020, only a single nation is attacked – Israel. The group have no time for any of the other problems in the world.

The group is in effect two women, Caroline Bedale and Jacqui Greenfield.

Their page receives virtually no comments or support. Except for the occasional rabid hater who pops up to make his mark or push antisemitic conspiracy theories:

Most of their recent posts have been to promote the hate group Palestine Action. Peace? This next image is a Palestine Action activist trying to throw a brick through a window. 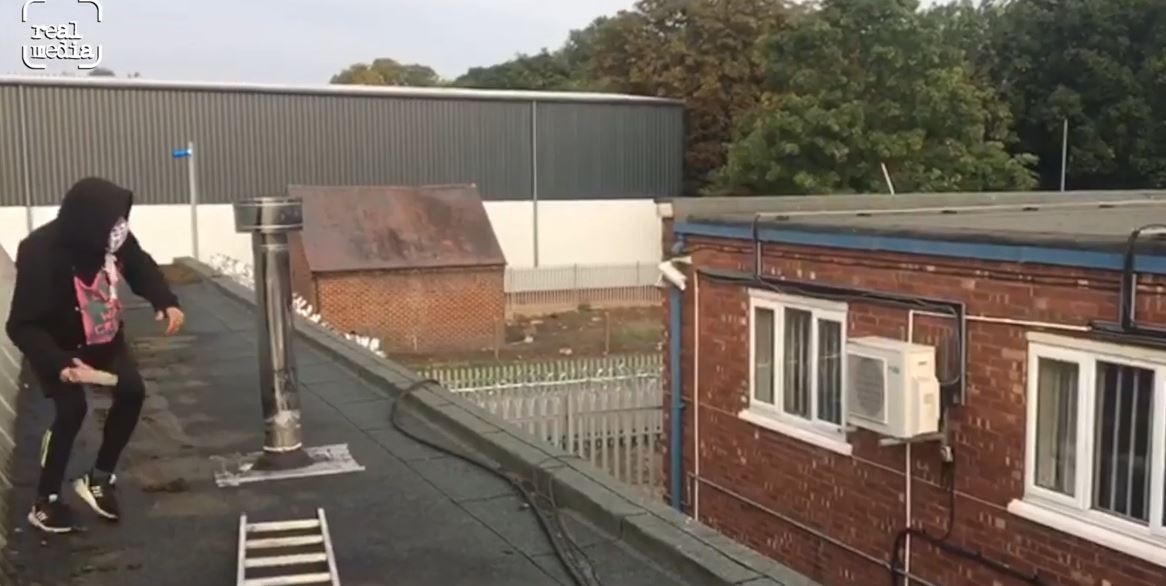 Palestine Action is a violent group that supports the destruction of Israel. It has no problem with antisemites or Holocaust denial, with well-known denier Sarah Wilkinson often turning out for the group. This image of Wilkinson at a Manchester protest was shared by the Oldham Peace Group: 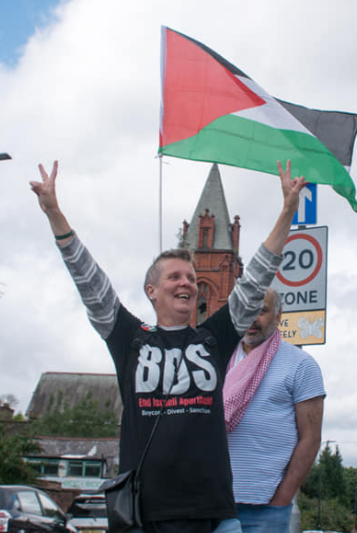 Co-hosts of the event, the Palestine Solidarity Campaign is a group inundated with activists who hate Jews. This hate group also support the destruction of Israel. So do the equally toxic Liverpool and Halifax Friends of Palestine

In other words the peace campaigners referenced in the article are brick throwing thugs, antisemites, hard-core haters, Holocaust deniers and a few naive folk who obsess over Israel and have aligned themselves to a movement seeking to destroy the only democracy in the Middle East.

No Justice – no peace

Anti-Israel activists are not ‘peace campaigners’. None of these groups have ANY CONTACT at all with Israeli peace groups, or groups that cross the divide and work building bridges between Israelis and Palestinians. They represent a side in the conflict and these groups REFUSE to talk to Israeli peace groups. They adhere to the Boycott Divestment and Sanctions movement that never mentions peace at all. Peace is not on the agenda for any of them. What they claim they seek is ‘justice’ – but then the question is – whose justice?

Those behind the Palestinian cause create demands that can never be met, wrongly state they are internationally sanctioned positions and then they suggest they will fight until this ‘justice’ has been brought to serve. This justice includes the destruction of the Israeli state that could only possibly come about through war and massacre. What type of peace is that?

The movements behind the boycott movement BDS, are those such as Hamas and the PFLP, both terror groups. To the radical Islamic terror group Hamas, justice involves throwing people from roof.

It is unforgivable that any journalist would buy into this deceit and help to propagate these lies by calling activists such as these ‘peace campaigners’ in articles. It takes just two minutes of research to expose the truth. Two minutes Nick Jackson obviously was not prepared to take.

The article above by Nick Jackson is just one recent example of what is a really dangerous situation. Casual readers see the word ‘peace’ alongside the image of the Palestinian flag. If anti-Israel activists are ‘peace campaigners’ – then what are pro-Israel activists? If Palestine = peace, then what does Israel equate to?

The Oldham Times and the journalist Nick Jackson are guilty of spreading dangerous fake news. These local outlets slip under the radar. There are 1000s of small regional papers and their articles are often shared and read online within their community groups. They tell their readers lies and their false message spreads. Brick throwing antisemitic thugs become ‘peace campaigners’. When Jews opposing them get attacked, it can therefore easily be seen as ‘justice’. Thus the safety of British Jews becomes compromised. It is our duty to seek out these ‘fake news’ errors and make sure they are addressed.

Perhaps we should start by letting Nick Jackson and the Oldham Times know that this lazy journalism is as dangerous as it is unacceptable.