If anyone knows the true face of Pro-Palestinian activism in the UK, then I do. My assessment is not built on assumptions, bias, or just a dislike of their politics. I simply spent a long time dressed as one of them. Going to their events, seeing how they act, and listening carefully to what they were saying. It didn’t take long before I realised that whatever the outward humanitarian mask, many of these people were not what they seemed. A deep and persistent undercurrent of hating Jews, or antisemitism, infested these groups every time they gathered. The meetings I attended were breeding grounds for intolerance, thuggery and racism.

So I did some detailed research on two of the main groups of pro-Palestinian activism in the UK. The first on the Palestine Solidarity Campaign (PSC), and later (on behalf of Jewish Human Rights Watch), on the PSC ‘sister ship’ in Scotland, the Scottish Palestine Solidarity Campaign (PSC). The results were clear and brutal. Almost half of Pro-Palestinian activists found on the streets, shared and promoted material from white-supremacy websites.

After publication, both groups chose to belittle or ignore the reports. They had little choice, as whilst the findings were indefensible, if either of these movements were to actually try to cleanse such racism from their midst, they’d cease to actively function. So the groups called me names and some of the activists made threatening remarks.

Still, there are important differences between these two movements both in size and structure, and in turn, this effected the way the reports were perceived. The PSC is much larger and it has a better, far more political, structure.  There are Patrons, and a board that itself, doesn’t really take to the streets. In turn, this opened up space for denial. They claimed these people on the streets were not ‘PSC’. It doesn’t matter that they are manning the stalls, running the events, heading the branches. The PSC had enough of a political head to create deniability (even if one of the people that ran their stall at the 2016 Labour Party Conference had frequently shared such racist material).

The SPSC had no such luxury. Mick Napier sits at the top of the SPSC and he is the most active of them all. The SPSC group is smaller than the PSC, and there wasn’t enough space between the top and the activists to create such deniability. They were too exposed. Napier, and thus the SPSC, had publicly identified itself with the racist thugs in the report, far too often for anyone to claim innocence when the report was published.

All this though is just cosmetic. In reality the PSC are just as dirty as the SPSC. Because the activists are all the same. The actions are all the same, The racism is all the same. North and South of the border. From the perspective of the street, and the ideology of the activists on the street, there is no separating them. In many ways this means the PSC in England & Wales is worse, because there are far more of them, and they operate under a greater veneer of respectability. In turn, this makes them more effective. When racists are more effective, we enter into ‘dangerous’ territory.

Pro-Palestinian Racists in the North 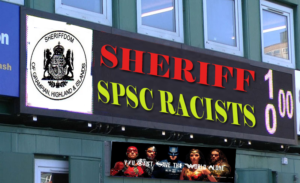 In Scotland yesterday (11 September 2017), Ally Coutts was found guilty of ‘acting in a racially aggravated manner with intent to cause distress and alarm’. A charge based on ‘racism’. Coutts was an SPSC activist, who along with other SPSC activists, have been trying to hound a Jewish owned business in Aberdeen. The SPSC had already chased Nisan Ayallon, the owner of this business, out of Glasgow. This is still a story only because of Nisan’s persistence, other businesses simply left, with the SPSC crowing ‘victory’ every time.

So as Scotland has Jewish businesses chased from its streets in 2017, the question was only about ‘motive’. Are these BDS thugs going after the goods, or is it more personal. Nisan Ayallon provided a perfect case study for analysis because he also holds Israeli citizenship.

Having spoken to someone who was at the court yesterday, there was little doubt. Security at the mall had no doubt. The police had no doubt and as it turned out, the Sheriff had no doubt. Nisan was targeted specifically. The action – racist. There were even Israeli goods in the same mall, that were left untouched. It was a personal attack. Nisan’s stall was attacked, Nisan’s staff were harassed and Nissan’s livelihood has been affected, because of racist SPSC thugs.

Like most thugs who use our liberties to attack the freedoms of others, Napier has laughed at legal attempts to curtail his actions. Napier often uses the image of a sports scoreboard depicting how often his crew have escaped such charges.  The verdict is in. His team now needs to change their name to ‘racists’.

Pro Palestinian Thugs in the South

On the subject of thugs, we can now focus on events in Birmingham on Saturday 9th September. We leave the territory of the SPSC, and enter the PSC’s domain. West Midlands Palestine Solidarity Campaign (WMPSC) were hosting an event, with Haneen Zoabi speaking. Zoabi is an elected Arab representative in the Israeli Parliament. I have seen Zoabi speak before.  As is so tragically common with Pro-Palestinian activism, an agency problem exists, and Zoabi, rather than seek to better the life of her constituents, spreads lies and hate about Jews wherever she goes. Because of this the PSC adore her.

How seriously she is taken is evidence of how little the pro-Palestinian world is connected with reality. Zoabi is an elected member of a parliament that she freely criticises. Zoabi’s role and her actions are evidence of Israel’s freedoms, not the opposite. When Zoabi speaks of oppression, everyone in the audience should laugh.

One or two in the audience on Saturday, including Mandy Blumenthal, began to interrupt, having had enough of Zoabi’s persistent incitement. Immediately, one of the PSC’s central thugs, Sarah Wilkinson, gets up and stands directly in front of those becoming vocal. Wilkinson had been arrested just days before in London, in another anti-Israel protest.

The video below leaves no question as to the intolerance and violence inherent in these groups.  In a mirror of actual Palestinian activity, within hours of the violence, the WMPSC had uploaded edited footage and suggested it was the ‘Zionists’ who unprovoked, had attacked the crowd. Only later, after I managed to obtain and upload missing parts of the footage, did they swiftly take their posts and their false accusations down.

Wilkinson clearly grabs Mandy Blumenthal’s phone and runs, Blumenthal runs to retrieve it, and is eventually surrounded and attacked. This is the true face of left fascists. Those who are able to meet criticism and verbal opposition only with violence. That these groups are built on an ideology that dehumanises over 90% of world Jewry, makes them a direct threat to Jewish communities worldwide. Remember, between 40-50% of these activists share material from neo-Nazi sites. It doesn’t matter what the other half of them think, in history, it never has.

I titled this blog with the use of the term ‘Pro-Palestinian’. I did so deliberately to highlight the stupidity of people using it. There is nothing ‘pro-Palestinian’ about any of this. These are racist, violent thugs, who target Jews because of their identity, and are willing to hound them out of business and violently attack them. Anti-Israel, or anti-Jewish (or both) are the best names for this activism. We have to stand up to them, and to anybody who gives them cover. Our opposition needs to be relentless.

These racist thugs, turn to the tiny minority of Jews (the 5%) to artificially give them cover. Just this week, a Scottish Blog called Bella Caledonia, incredibly published a piece that tried to excuse people posting material from white supremacy websites. The piece was written by one of the 5%. It actually blamed the victims of racism for the racism. A horrific, disgraceful piece, that highlights how twisted these people are willing to become to protect their fetish. Bella Caledonia actually gave cover to Nazis. Imagine what you could do to any minority, if it was legitimate to find their 5% to use as a cover to attack them.

What is clear, is that these groups are dangerous. For decades they have collected money across the UK. They do so by pushing tragic pictures of the ugly face of conflict. But they are thugs, they are intolerant, they are racist and they are dangerous. Their motivation, just as with the attacks on Nisan, is all about the Jews.

One other thing to remember too. For all the money they have collected, for all the claims that they are doing it for the betterment of Palestinians. The number of Jewish businesses they have successfully forced to close in the UK, is larger than the number of Palestinian refugees they have helped out of refugee status. More Jewish businesses closed, than schools or hospitals built. It isn’t about making things better for the Palestinians at all, it is about making things worse for the Jews. Think about that.