On Thursday night Jeremy Bowen reported from Jerusalem on BBC One News at Ten. The segment lasted for four minutes and three seconds. It is 243 seconds in which Jeremy Bowen gave a masterclass in anti-Israel propaganda.

Make no mistake – this type of ‘news reporting’ is not accidental. Every image – each word, is inserted or removed to deliver a message. There is also no doubt at all that the level of distortion we saw on Thursday – delivered on a BBC flagship news programme – helps to spread antisemitism.

Bowen’s segment on President Biden’s visit to the region was introduced by Huw Edwards. In the lead-in Edwards tells the viewers that Biden and Israeli PM Lapid signed a join declaration ‘to stop Iran developing nuclear weapons’.

Bowen begins. He is not interested in the declaration at all. He quickly tells viewers “it has all been said before“, explaining that Israel just “needed him to say it again” (because obviously Israel is attention seeking and craving of indulgence like that).

With this dismissal Bowen sidesteps the actual news of the visit completely. There is no need to mention the Abraham accords, the growing new alliance in the region, the changing face of geo-politics. Not even potential growing ties between Israel and Saudi Arabia. Bowen doesn’t care about that. He just wants to get on with demonising Israel.

To begin his masterclass Bowen takes us to the Northern border. Where Israel faces Hezbollah – one of the most lethal radical Islamic terror groups on the earth. Hezbollah is only described as “Iran’s strongest ally and client” and viewers are told that Hezbollah is a “friend of Iran”. In fact – although BBC viewers wouldn’t know this – the terror group has not only been proscribed by many western democracies – it is even considered a terror group by the Arab league.

Careful editing then does its work. Bowen talks to an Israeli soldier who is stationed on the border. We are told that “when Hezbollah appeared they were in Israel’s sights” and as he said this we are show three clips. The first was an Israeli soldier clearly aiming his weapon. We are then shown the view through the soldier’s scope – and finally we are given the image of two guys being targeted (in civilian clothes).

Israelis pointing guns at a couple of people with binoculars is all we see. No mention of the 150,000 rockets pointed towards Israeli citizens.

Bowen then tells us that ‘it took one incident to spark a month of war in 2006‘:

Indeed it did. On 12th July 2006, Hezbollah launched rockets at Israel military posts and towns – wounding several civilians. At the same time, they also attacked on the ground, killing three soldiers, injuring several and capturing another two. It was such a minor ‘incident’ that Hezbollah had even given the long-planned operation a name (“truthful promise” – in reference to Hassan Nasrallah’s pledge to kidnap Israeli soldiers). In total – in the raid and Israel’s immediate attempt to recover the kidnapped soldiers – nine Israeli soldiers lost their lives. Hezbollah refused the offer of an immediate ceasefire in exchange for the kidnapped soldiers – and so the two sides went to war.

One wonders whether if the war had started because Israel had invaded Lebanon, kidnapped people and killed 7 other Lebanese, Bowen would still have belittled the event by describing it as an ‘incident‘ – as if the conflict was started by accident.

Bowen then got to turn to the subject he wanted to address all along, and it had nothing to do with Biden, Saudi, Iran, the Abraham Accords or anything else of immediate import.

Bowen said this:  “What’s missing is any attempt to ease the festering Israeli – Palestinian conflict“.

As he said this these two images were shown to represent the two populations:

On the one side are orthodox Jews – no doubt plotting to do diabolical stuff to Palestinians on their phone. On the other are 3 Palestinians sitting down on chairs. A complete misrepresentation of the conflict Bowen was referencing (why not soldiers and suicide bombers – or at least rioting Arabs). To make sure you understand which side maintains their humanity – the Palestinians even have a cat.

“on the other side of the wall that Israel has built to separate Jerusalem from the Palestinians of the west bank.”

The only part of that which is true is the fact Israel built something. There are two key ways of looking at the security barrier. The first is the historically factual way. Israel built the wall to protect itself from an endless stream of deadly suicide attacks carried out by terrorists crossing a porous border. That is why it was built. Period. Don’t believe me? Here is the BBC in 2002: 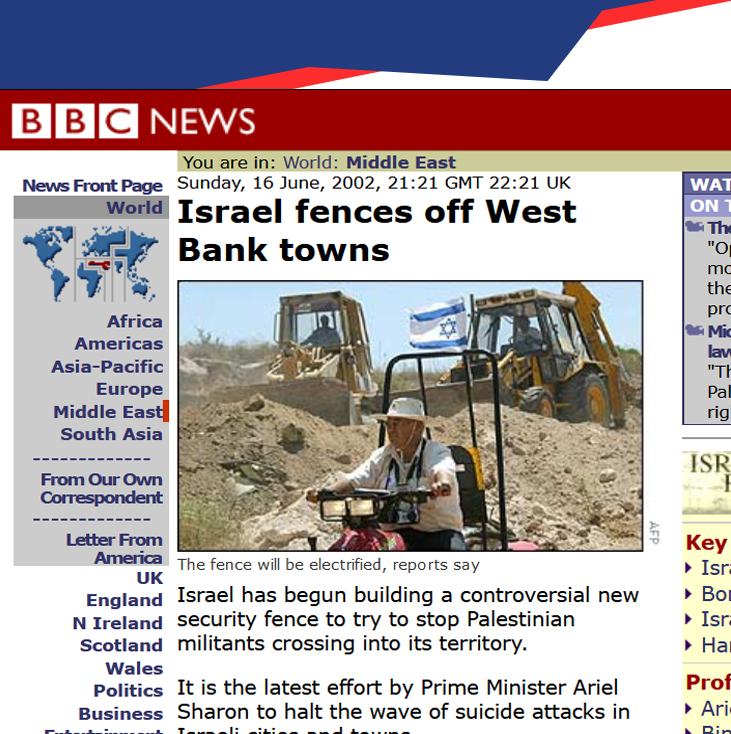 The other way is the way that anti-Israel activists distort the truth. They want to make it about ‘separation’ in order to help spread the Apartheid Lie. And as Bowen is there to demonise Israel – he turns his back on the truth and renders the BBC nothing more than an anti-Israel propaganda machine.

In the clip we are then introduced to the only two civilians in the entire piece (that was meant to be about Iran, Biden and so on) – two Palestinians in Ramallah. A young girl and an elderly man. Both talking about how the President doesn’t care about them. It gets worse, Bowen then reinforces the Apartheid smear:

“Along Joe Biden’s route into Bethlehem, his next stop, are accusations that Israel is guilty of Apartheid. Denied by the US and Israelis, widely accepted by Palestinians and human rights groups.”

For those that missed it, re-read Bowen’s clever use of language. He has created a situation where only the US is standing by Israel against all the human rights groups.

This is simply a lie. There is no Apartheid in Israel – and the fact anti-Israel activists have corrupted NGOs like Amnesty from within may be sad, but it is obvious to anyone who cares about truth. And Israel and the US were not alone in rejecting the blatantly biased reports. Canada, the Czech Republic, France, Germany, UK, Austria, Australia, Ireland and the Netherlands are just some of those who turned their backs on it. Even Israeli Arab politicians rejected it. To present the accusation in the manner Bowen did is deceitful journalism at best.

And again – Bowen chose to reinforce his message with not one example – nor two – but three separate shots of different ‘Apartheid’ signs:

He wasn’t done. Bowen saved the best for last:

“and he (Biden) will see many portraits of Shireen Abu Akleh, the Palestinian Journalist killed by Israeli troops in May”

Which was accompanied with an image: 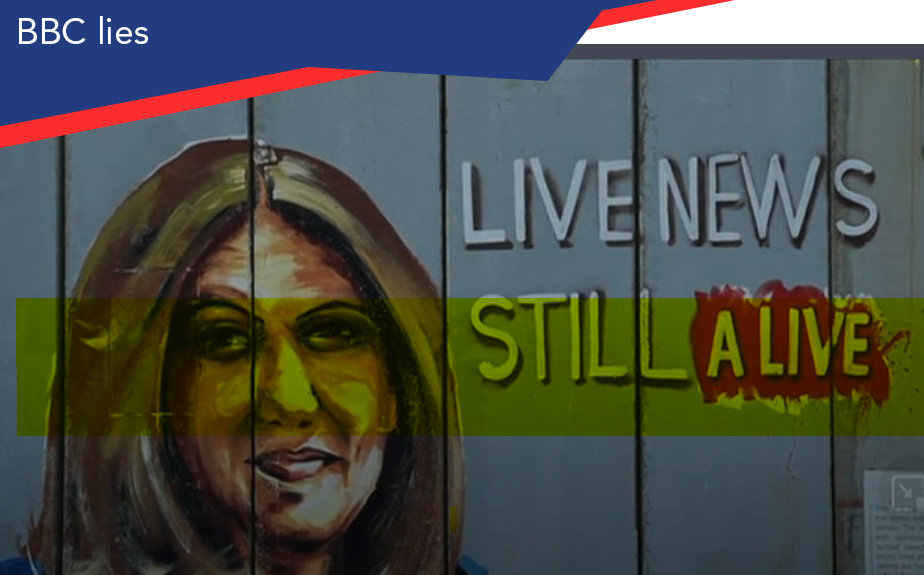 We do not know who killed Shireen Abu Akleh. And the key reason we do not is because the Palestinians themselves were not forthcoming. It is also possible Palestinians killed her. Whatever may or may not have happened on that day – Bowen doesn’t know it – nor does the BBC. Bowen knew exactly what he was doing here. Just recently the Guardian was forced to retract on this very issue. This is an outright, deliberate and inexcusable lie.

BBC and Bowen – Enough is enough

These problems with BBC reporting are not new. Jeremy Bowen is one of those with a very long history of demonising Israel through inaccurate reporting. The raw truth is that this type of activist journalist (one who spreads activist lies through his journalism) helps the spread of antisemitism. This means that our licence fee is being used to spread racist hatred against Jews.

It is not enough for the Jewish community organisations to make half-hearted noises – we are well past time for that. It is also not right that it should be left to a tiny Jewish community to have to (once again) take a stand against an institutional problem. The BBC complaints service does not work and the BBC are not capable of investigating themselves. Complaints to Ofcom have little effect. If Israel revoke the licence of toxic BBC journalists – we know how that would be received. No. none of this is good enough anymore.

The BBC has been getting away with telling lies and helping to spread hate for decades and even a previous investigation was ‘covered-up’. Utterly deceitful behaviour.

We need the government to step in and force a thorough independent examination of exactly what has gone so badly wrong at the BBC. And then make sure those findings are published.

In the meantime the BBC should at least do one decent thing – and make sure that Jeremy Bowen never reports from Jerusalem again.

19 thoughts on “The BBC – Bowen, his lies, and the spread of antisemitism”