Those who have no history have to steal one.

Anyone who spends time on social media has seen these pictures. Images from the British Mandate held up by anti-Israel activists to ‘prove’ that there was a land called ‘Palestine’ before the Jews ‘invaded and stole it’: 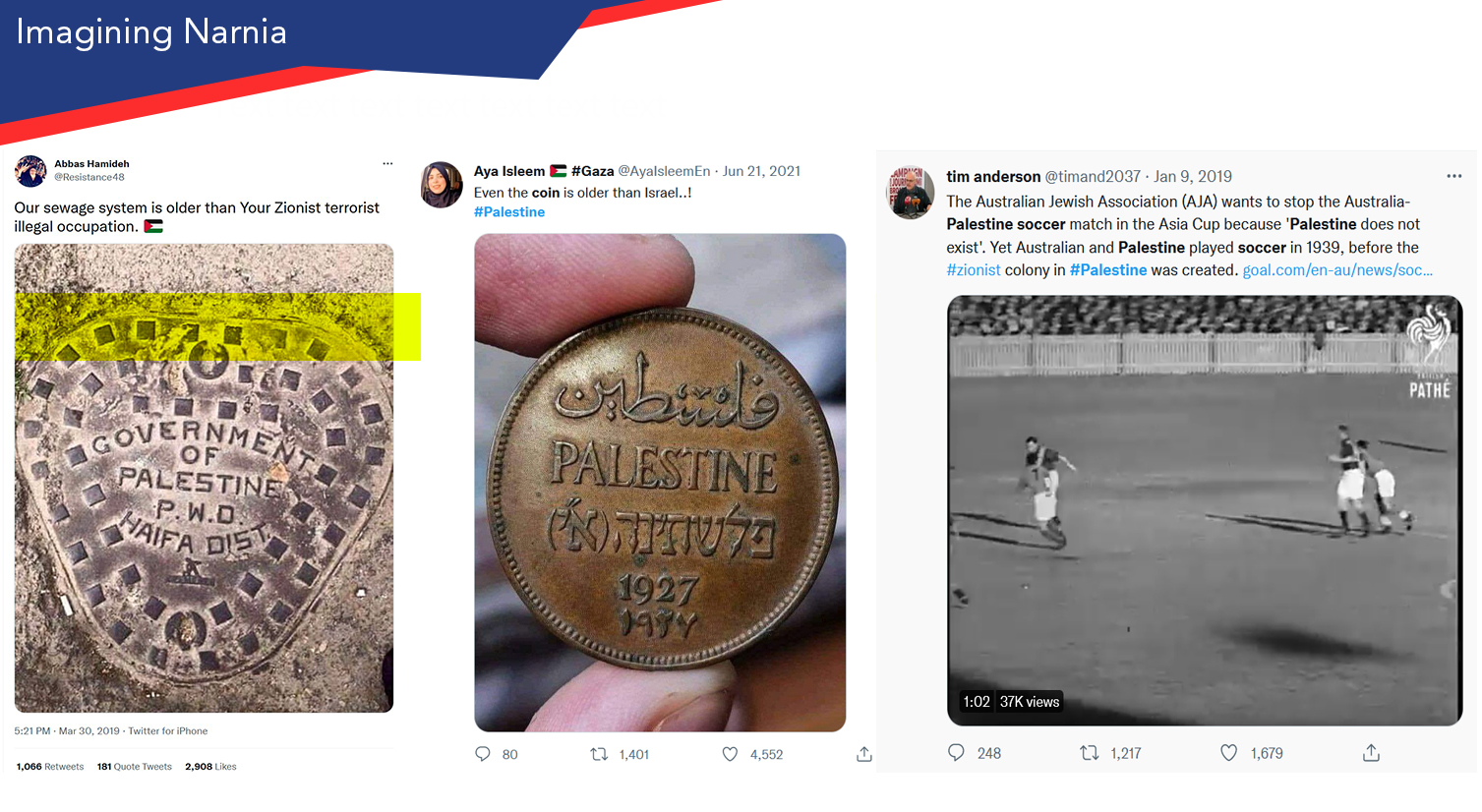 As we all know, these images betray the ignorance and foolishness not just of those who post them – but because they go so viral, also of the entire anti-Israel movement that loves to share them around.

The scale of the delusion is staggering. This tweet about a ‘Palestinian’ driving licence was posted on 18th July. Within a day it had already received over 24,100 likes. 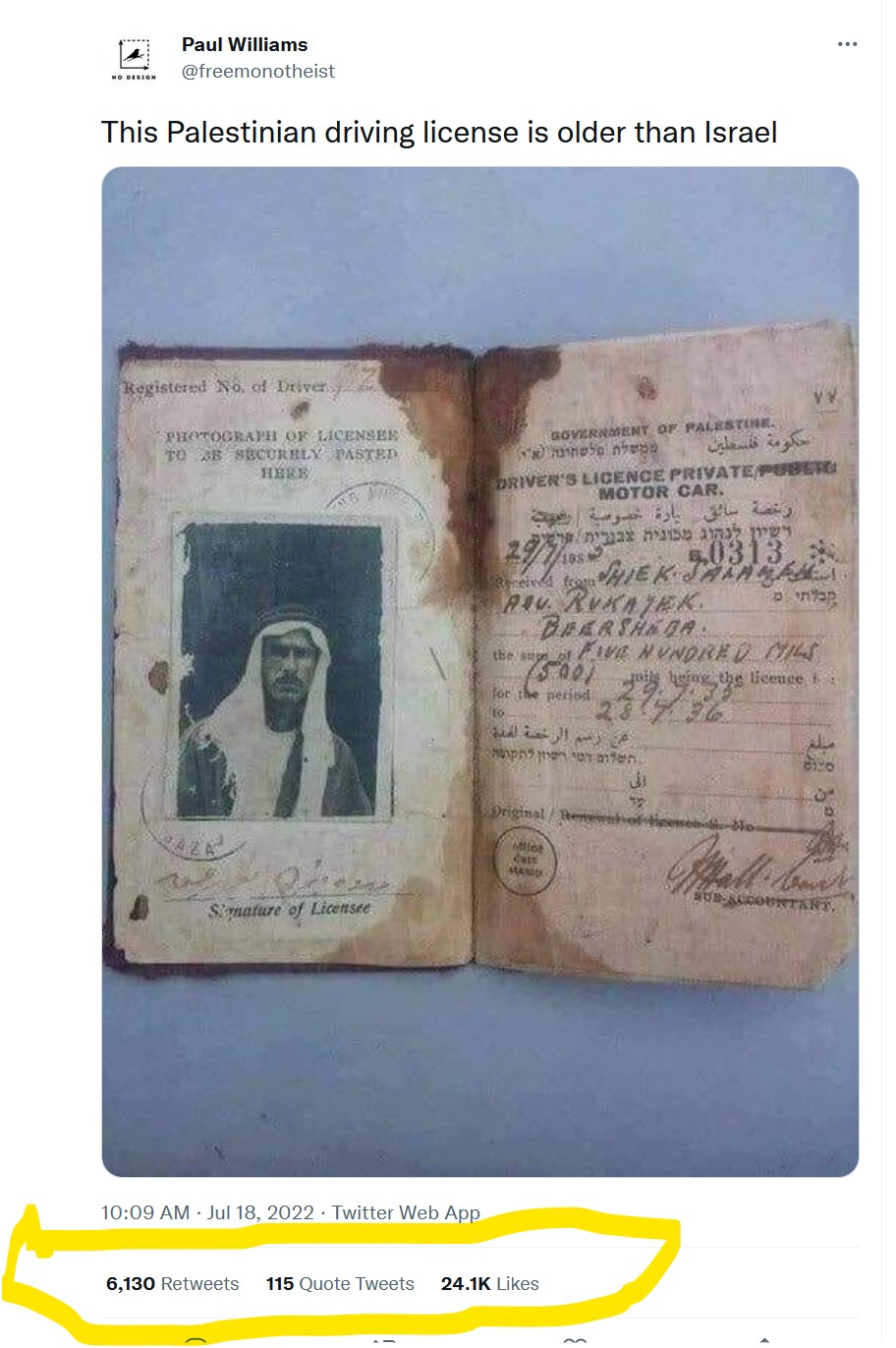 The licence of course was a British one – issued from within the Mandate that the League of Nations ratified in 1922 in order to help rebuild a Jewish homeland.

But few stories encapsulate the Palestinian theft of Jewish history as much as this next one:

It starts as always with viral posts. These were tweets about the ‘Jerusalem’ or ‘Qalandia’ airport:

These posts go viral for several reasons. The first, as with the coin, manhole, licence and soccer team – is to suggest that ‘Palestine’ existed, happy and glorious – before the Jews stole it.

The second is that Israel is planning to build a settlement called ‘Atarot’ on the site:

Devoid of any real national story, there are two periods the Palestinians rely on for their fake ‘history’. The first is the Palestine Mandate, a land the British only called ‘Palestine’ because for them it was the romantically notional name given to the Christian ‘Holy Land’. The other is the Jordanian occupation between 1949-1967.

The airport covers both these periods. The false narrative being sold here is that the Israelis invaded, captured, and stole the airport from the Palestinians. And now they want to build on it – thus erasing the glorious Palestinian history from the map.

As you will see – rarely has a package contained so much bunkum.

In 1912 land was purchased by ‘Hachsharat Hayeshuv’ – the *Zionist* ‘Palestine Land Development Company‘. This was before the British even arrived. The intention was to set up a farming village outside Jerusalem.

The Jews abandoned the first attempt to settle the land during WW1, probably in fear either of Ottoman oppression or military conscription. The Ottomans viewed Jews as ‘enemy’ (as an example Jewish communities in Tel Aviv were expelled at this time).

They returned in 1919 and in 1923 the JNF purchased a further 384 dunams to expand the Moshav. It was named ‘Atarot‘ after a biblical settlement that was believed to have existed in the area.

The British wanted to build a small airstrip near their seat of power in Jerusalem – and they began to expropriate the Moshav’s lands.

In 1926 and 1931 the British uprooted trees, destroyed crops, tore down buildings and restricted any further growth of the Moshav.

The fields and trees they destroyed were part of the livelihood of the Jewish village.

As a side note – In 1936 the airport was renovated by a Jewish engineer and businessman, Pinchas Rutenberg. And as the airport began to take commercial flights – Rutenberg founded ‘Palestine Airways’: 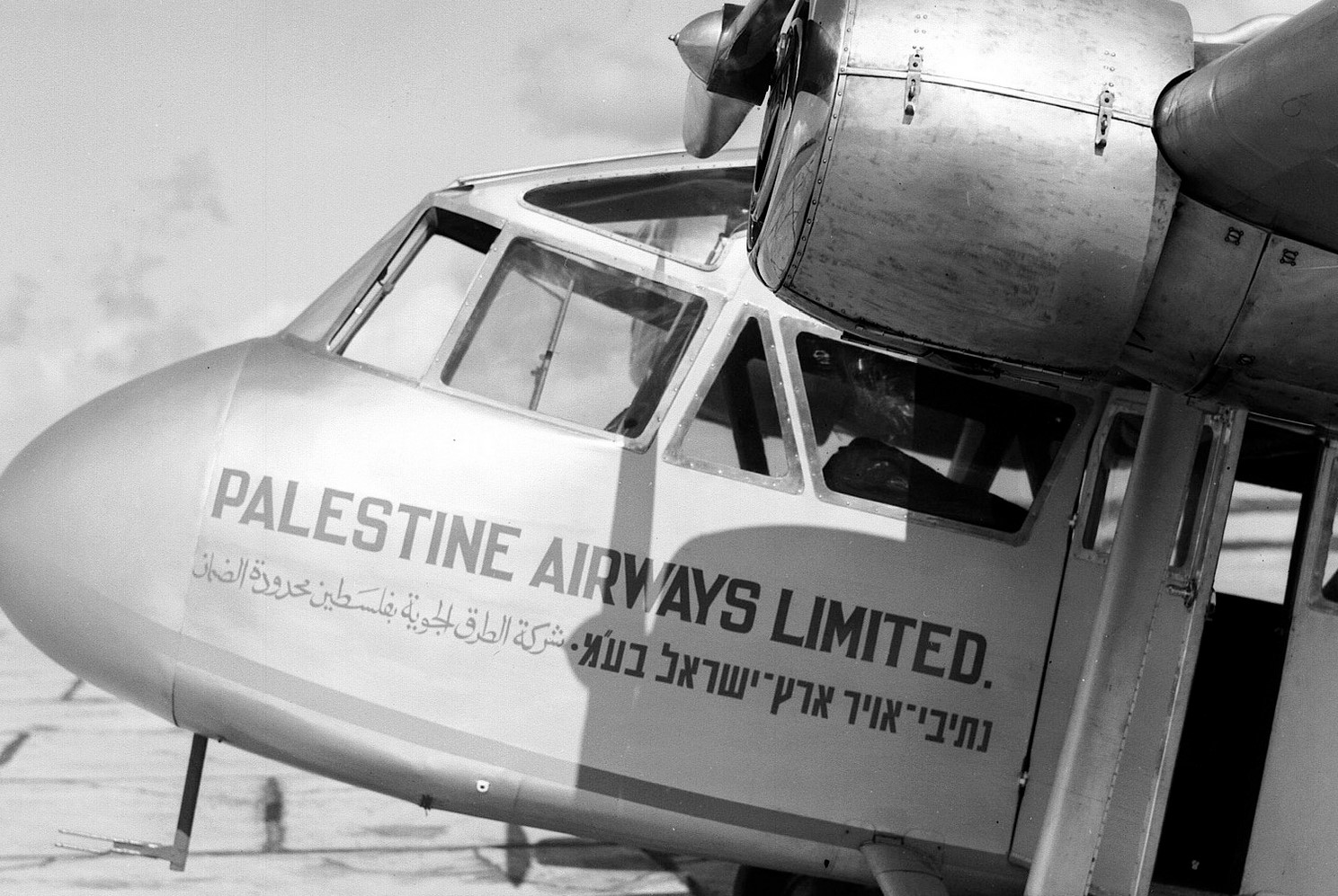 That is no doubt another image that anti-Israel activists can turn into a viral ‘theft’ of Jewish history.

There was no happy ending.  In 1948 The Jewish town was attacked, first by locals, and then the Jordanian Legion. As they tried to hold on, a convoy sending supplies in March 1948 was attacked, and 16 Jews were slaughtered. Unable to survive – the Jews were forced to leave in May. Several Jewish neighbourhoods in the area were ethnically cleansed: 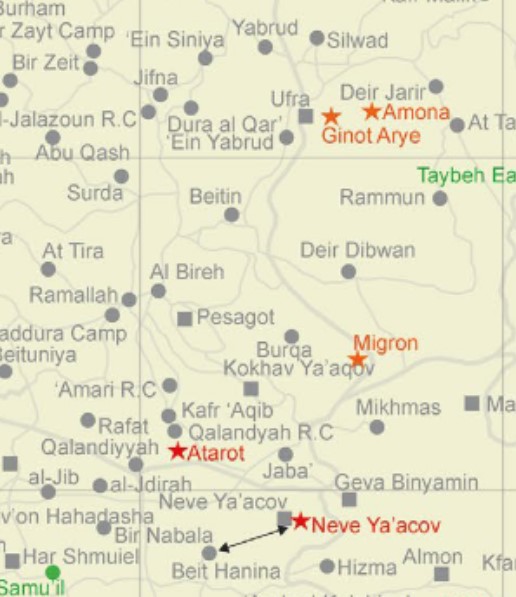 The Jordanians destroyed almost all the evidence that the village had ever existed – and used all the available lands to expand and internationalise the airport. It was built on top of an ethnically cleansed Jewish village.

This is the airport the Palestinians are so proud of.

It would be foolish to think the fake narrative is only the work of social media trolls. This is how this history is described in a piece on the website of the  ‘Institute for Palestine Studies’ in the section under ‘Historical Background‘:

“The airport was established by the British Mandate in 1920’s. It was a small military base known by the British as ‘Kolundia Airfield’. In 1948, the British Mandate ended and the West Bank was put under the supervision of Jordan. In the early 1950’s the Jordanians turned the airfield into a civil airport, erected the still existing airport building and named it the Jerusalem Airport.”

They simply wipe the Jewish history out completely.

The inversion of truth

I often say that the Palestinians probably cannot believe their luck. They can make up any old story – create any fake history, and much of the world is willing to think the worst of the Jews. This was land that the Jews bought – even before the British arrived. They built a village there. For decades they faced British and Arab hostility – had land stolen – people killed, and eventually were expelled completely from the area. And today anti-Israel activists turn it all on its head – pushing lie after lie. Perversely, they even use words like ‘illegal’ and ‘colony’ –  as if it is the Jews who have stolen something.

“The Qalandia Airport was a magical place where I first experienced, as a child, the freedom of flying. Like the rest of Palestinian land, it was stolen, violated and deformed, becoming a symbol of oppression and captivity.” – Hanan Ashrawi, a member of the Executive Committee of the Palestine Liberation Organisation (PLO) 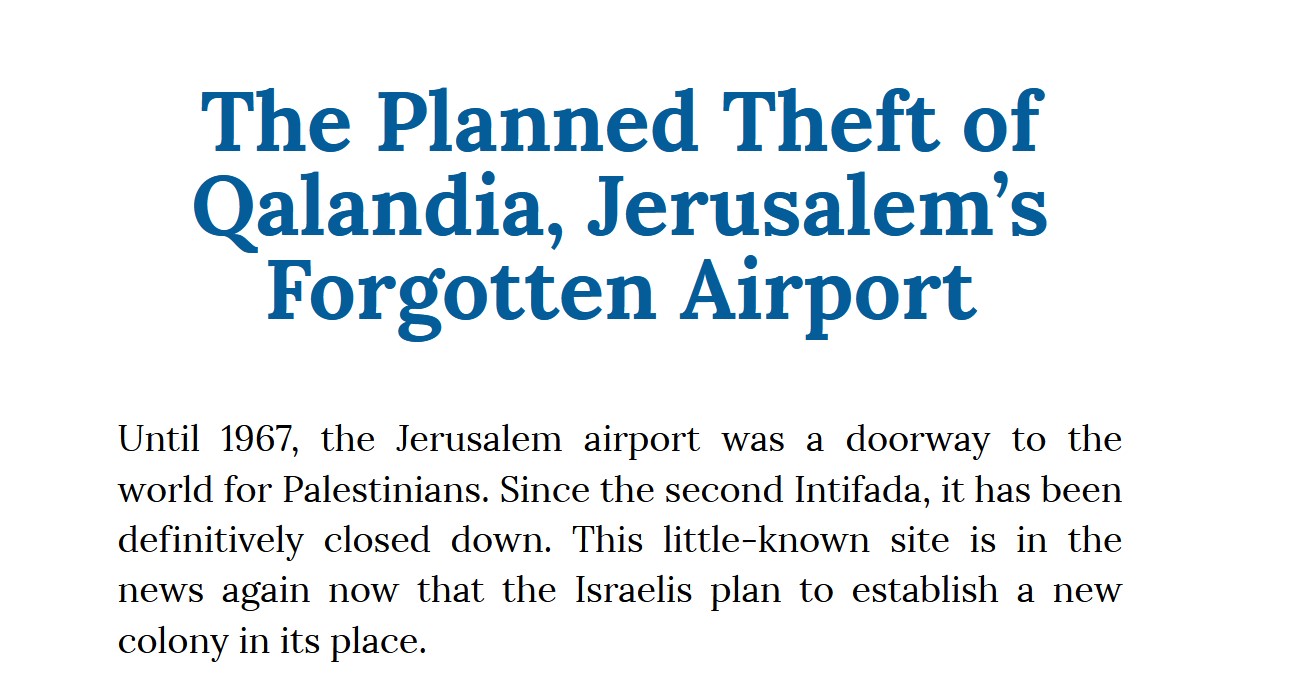 Very little of what Palestinians claim is true. It is without much doubt one of the most effective and successful propaganda machines ever built. They even make up stories about imaginary dams flooding and European politicians will share the story as if it is true. The Jerusalem Airport story is a microcosm of the conflict and the Palestinian propaganda war against the truth. The Palestinians deny Jewish history and seek to erase it – in order to convince people that once upon a time Palestine was actually a nation. When you literally do not have a history you have to invent or steal one. The Palestinians do both.