We are witnessing a legitimisation of Nazi messaging against Jewish people in Israel. Some of it is our own fault. We have become so desensitised that we no longer differentiate between ‘a simple lie’ and full on extreme-right rhetoric. We see the messages everyday. They have entered the mainstream and celebrities, newsreaders and lecturers all use it. ‘The left’ as Nazi. We should display zero tolerance of this. Instead of pointing out the blatant swastika hidden behind the image, we enter ‘rabbit holes’ of discussion about historical accuracy. When we respond, at best, we just call it ‘propaganda’.

There is a difference between anti-Israel propaganda and Nazi messages. Arguments over cease-fires, settlements and proportional response are ‘narrative’ or ‘propaganda’ discussions. But what I put forward here has nothing to do with legitimate discussion or hard-left antisemitism. It isn’t about whether the other side has created a myth or not. What I deal with here is Nazi messaging and when you see it, reject it as swiftly as you would if it was in the shape of a swastika. Here are just a few examples.

I start with this map (two examples of the same map). It is the first of the four in the ‘disappearing Palestine‘ image. The map is probably the most used of all the images in anti-Israel advocacy. It appears on every campus, at every event, and has even been mistakenly used by mainstream media sources. 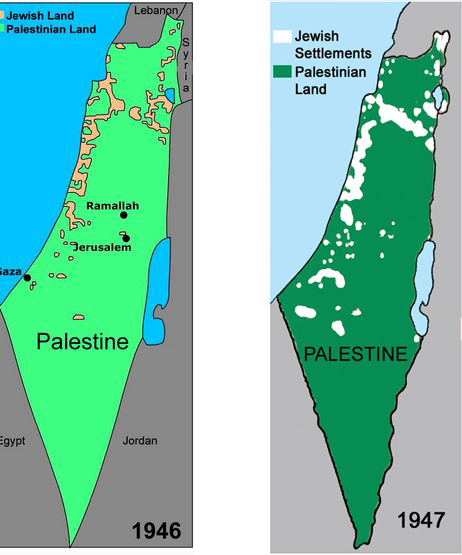 I have no intention of addressing these maps as an anti-Israel propaganda exercise. Whilst I understand their good intentions, people who engage it (and I have seen plenty), by pointing out the issues of demographic mistakes or state own land (and so on) are missing the point entirely.

Let me address the real issue here. Land where Jews were massacred and ethnically cleansed (see lack of Hebron in map on left) becomes ‘Palestinian land’. The term ‘Palestinian land’ does not even relate to where Arabs live or what they own. What has happened is that Jewish communities who have lived there for millennia are ‘excluded’ from the ‘Palestinian population’ and placed into Jewish ghettos with their rights to any claim removed, purely because they are Jewish. The green area may as well have the words ‘Judenrein’ printed on them.

Still don’t get it? Imagine a map of the United Kingdom. Then imagine someone had mapped out places where ‘non-whites’ live. Not even just new immigrants, but anyone who was considered ‘not white’, regardless of how long their families had resided in the UK. At what point, as they designate the areas which are free of ‘non-whites’ as ‘British land’, do the swastikas start appearing in your mind?

There is no excuse for this map, nor any legitimate way of reading it. Wherever this map appears, Nazi ideology is being promoted. It has no place *anywhere*. It is a clear example of how this type of Nazi terminology has entered the mainstream of the anti-Israel cause. If you see this map, wherever you see this map – call it out for what it is. Extreme-right, Nazi material.

From Hebron to Jerusalem and Baghdad to Tulkarm 1929-1949

The next example is a simple one. The Jewish community of Hebron was ethnically cleansed following a massacre of Jews that took place in 1929. That ancient community had a virtually unbroken presence in Hebron, aside temporary expulsions (Crusaders) and an exodus following a pogrom in 1517.

Throughout most of the mid 1800s, Jerusalem had a Jewish majority. For several thousand years, temporary denials of access aside, the Jewish people were a sizeable part of the city’s population. Much of Jerusalem’s Jewish community were ethnically cleansed in 1948. The commander of the Jordanian forces is reported to have said: ‘For the first time in 1,000 years not a single Jew remains in the Jewish Quarter‘.

Descendants of all of these Jewish families, live in Israel today. They are counted as ‘invaders’ ‘colonial settlers’ and ‘usurpers’. Why? Because they are Jewish.

There is no doubt that an influx of Arab migrants entered the Mandate of Palestine throughout the 1900s. That flow of human traffic had started decades before. Egyptians fleeing military conscription in the late 1800s for example. European interest (Britain/France) alongside a Jewish Zionist influx also brought investment, and people gravitated towards economic growth. There are many such clues. Bushnak for example is the surname of Arabs who came from Bosnia. Many other surnames, such as Al-Baghdadi, Tamimi, and Al-Tachriti are clan-based and clearly not local. Martin Gilbert estimates 50,000 Arab immigrants arrived under British rule, others suggest double that.

Many of the descendants of these non-Jewish families live in Israel, or the 67 lands today. They are considered indigenous people, whose rights to the land override all other claims. Why? Because they are not Jewish.

When UNWRA created the definition of a Palestinian refugee they based it around residency of only two years. This means that a 1946 immigrant from Iraq is counted as an indigenous person whose rights in places such as Hebron override those of a Jewish person whose family had lived there forever.  That is nothing to do with settlements or checkpoints. It is another Nazi narrative.

Jewish people landed on the shores of the Ottoman Empire and then later British Palestine. For the most part they were refugees fleeing persecution. Spikes in Jewish immigration coincided with periods of persecution and the closing of the doors of the UK (1905) and the US (1924) only narrowed the choice. By the 1930s Jewish people had nowhere else to go.

The increase in Jewish immigration was met by Arab violence. The higher the number of refugees, the worse the violence. Eventually the Arab refusal to accept Jewish refugees, forced the British to close the doors completely to the Jewish homeland. This violence was the primary driver behind the idea of partition.

Every refugee or immigrant becomes a ‘settler’, an ‘invader, a ‘Khazarian thug’:

These myths, and every variation of them, all portray Jewish immigration as violent, land-stealing and foreign. Jews came and ‘stole’ the land (under the British – really?). People create something unnatural about the nature of the Jew and they sanitise it by calling every Jew who arrived in British Palestine, ‘Zionist’. Many of these same people, who dehumanise the motives, and desires, of the Jewish immigration into British Palestine, hold up banners saying Europe and America must ‘welcome refugees’.

As always, I ask you to translate the language to the UK or US. Who claims refugees steal homes and jobs? Who calls them invaders or aliens? What ideology dehumanises their motivations and intentions? Yet a complete demonisation has occurred in relation to Jewish people running from Pogroms and Genocide. Why? Because they were Jewish. This is yet another Nazi narrative.

How long have you been living here?

There are a range of questions that nobody would ever ask someone living in the US or UK. Why? Because we are not racists. Almost every single Jewish person who lives in Israel were born there. As were most of their parents. The conflict, started by Arab violence, has created the notion of two separate states, but beyond that? My neighbour is of Indian heritage, I am an ethnic Jew, the person next-door-but-one seems to be white British. We were all born here. As were our parents.

Would anyone begin to suggest that the individual rights of the white British person exceed those of myself or my neighbour? And yet ‘recent invaders’ is a term often used, even in places like the university campus, to describe Israeli Jews. If someone called my neighbour, a recent ‘invader’ where would you place that person on the political map?

Remember the right-wing attack on Obama’s heritage? Pretty unpleasant, right? I mean, we know what side of the spectrum these type of attacks come from – don’t we? Anti-Israel activists use that exact strategy with Jewish people in Israel: 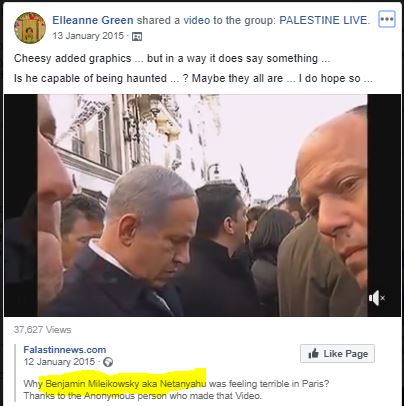 For the record, both Elleanne Green and Judith Brown (images above), posted that they joined Labour for Jeremy Corbyn. All of these people, may be dressed up as leftist peacemakers, but the messages are all extreme-right wing.

Imagine walking into a Fish and Chip shop in your local high street. And let’s say the owner is of Turkish, Indian or Chinese heritage. Would you and your friends return to form a picket-line outside, to accuse the owner of cultural appropriation? Where exactly on the political spectrum would you sit, if the thought entered your mind? Yet everything Israelis do is branded as ‘cultural appropriation’.

I start with the fact some Israeli families have lived on the land as long if not longer than the Arabs. Are they not allowed to make hummus and call it their own? The next addition is of course the descendants of the million or so Jewish Arab refugees that arrived. All with hummus, pita, falafel, malawach, tabouleh, matbukha, jachnun and shakshuka in their recipe books. The final nail is the Arab Israelis, 20% of the population. The majority of Israelis are directly descended from people who have never left the region. And what of the rest? What is so wrong with Israeli hummus?

Take an Israeli family who have resided in the region for ever. Before the British, before the Turks, before the Arabs, before the Christians. If they make Hummus it is cultural appropriation. Why? Because they are Jewish. How can people not see this for what it is? Nazi messaging.

Nazi narratives have to be rejected

These are just some of the many examples available. It is wrong to call any of this propaganda and to focus on arguing against the logical or illogical pillars. We should not be calling it revision of history either, because it needs to be called out for what it is. The material is of far-right ideology and the message is a Nazi one.

Far-right ideology has infested the self titled ‘peace-camp’. Much of this (not all) is down to the red-green alliance. Radical Islamists are not leftists and as these groups hold hands on anti-Israeli platforms, elements of the left swallowed extreme-right, racist ideology, simply because it had been repackaged. These themes have entered into campus, into unions, into schools and into politics. Nazi, anti-Jewish narrative has gone mainstream. I have heard or seen every single one of the examples above hundreds of times. I’ve seen them on campus, I’ve seen them in politics, and I have witnessed children being fed them at school.

It is time for us not just to call it out, but to tear the whole structure down.

53 thoughts on “Nazis in disguise. How some anti-Israel messaging is extreme-right rhetoric”