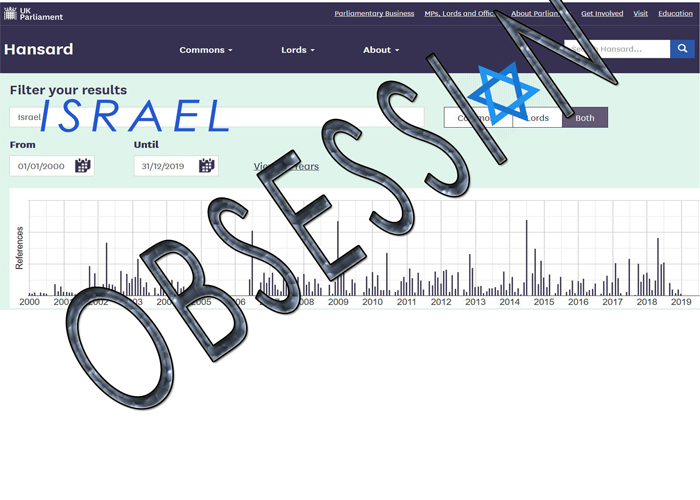 Delving into Hansard, the record of Parliamentary debates, turned up astonishing results on Israel, the Levant, Jews and antisemitism. It highlights a total obsession with Israel in Parliament and suggests antisemitism is a growing problem, of which Corbyn is merely a symptom. It has something to say on ‘Palestine’ and Israeli settlements too. Take a look:

Hansard provides official transcripts of Parliamentary Debates in Britain. The digital archive is online and searchable. Like many things associated with the British Parliament, Hansard’s own history is built upon the bedrock of people fighting for freedom. Thomas Curson Hansard was one of the original pressmen who fought for the right to publish reports of Parliamentary proceedings.

Hansard opens a window into the beating heart of British democracy. Through use of the archives from the 1800s, these discussions can help recreate the world vision, of what was at the time, the most powerful nation on the Planet.

We start with searching the terms of ‘Palestine’ and ‘Jerusalem’.

If anti-Israel propaganda is to be believed, ‘Palestine’ was the name used to describe this region, long before the ‘British Mandate’ was created. Except Hansard records show that there is almost no mention of ‘Palestine’, before the 1920s (when it was created as the legal vessel to enable the Jewish people to return to their historical homeland). If the British considered this area ‘Palestine’ and they were certainly active within it, then why is it hardly mentioned? Perhaps, you might weakly suggest, that the British were simply not talking about the region or foreign affairs at all. You would be wrong:

Jerusalem was mentioned 219 times in the 19th century. On the rare occasions (41 times) that ‘Palestine’ was mentioned, more than half were when someone in Parliament used a biblical reference or spoke about British Jews:

The 19th Century mentions of ‘Palestine’.

Beyond a nostalgic biblical concept that drew lines on a map in the minds of Christian men, ‘Palestine’ simply did not exist. In comparison to ‘Palestine’, the word ‘Syria’ was referenced 517 times. The identity ‘Palestinian’ appeared for the first time in 1920 (at the time it was an identity only really accepted by Jews).

Here’s another nugget. I did a search for Israel v Palestine from 1800 until 3/11/1917 (the day after Balfour). Even when I deduct the errant results (reference to a man named Israel), there were twice as many 19th Century mentions of ‘Israel’ in Westminster, than there were of Palestine.

Gaza is mentioned seven times in the 19th Century. Not once in the same speech as the word ‘Palestine’. Whenever Gaza is referenced, it is with linkage to the Bedouin and always geographically tied to Egypt. Ramallah was not mentioned until 1948. The city Jericho was mentioned eighteen times. Each occasion either a biblical ‘Walls of Jericho’ (Jewish) analogy or quoting from the Gospel of Luke (Christian).

Nablus is mentioned once, on the opening in 1882 of the English Episcopal Church in the town.  Nazareth has fifteen mentions. If it wasn’t used in a discussion about Jews, then it was to quote the bible (‘can any good thing come out of Nazareth’).

The search of ‘Acre’ (Akko) is illuminating. In discussions of the 1840 capture of Acre by Sir Charles Napier are all manner of international identities. The Egyptians, Turks, Lebanese and Syrians are all mentioned as players. The one identity completely missing? ‘Palestine’. This is evidence against the argument that the British simply viewed ‘the natives’ as beneath them. The British seemed to have noticed, and named, everyone involved. In moments of biblical nostalgia, Palestine may be referenced, but in cold, hard real-world political talk, it is simply not there.

Hebron had no mention at all. Jenin’s first mention was during the 1930 uprisings. Haifa had three mentions before 1850, all of them typographical errors of the words ‘Half a‘. Haifa’s first legitimate mention? Discussions in 1883 over the denial of entry of Jews to Haifa. A matter which the British Government wanted to protest.

The first ever use of the word ‘antisemitism’ (anti-Semitism in Hansard) was by Winston Churchill on 22 August 1911. He was discussing an incident in Wales. Some of the records during the Mandate and the rise of antisemitism are heartbreaking. Take this snippet, from a speech by Colonel Wedgwood on 24 November 1938. He was talking about Jewish refugees in Europe:

If you do not want them to come here, where humanity and Christianity would at least give them a chance of life, let them go to Palestine, to their friends, and do not keep them out of Palestine because you are afraid of offending a gang of murderers in Palestine.

It is a tragedy Britain closed the doors to British Palestine, just as Europe’s Jews needed the sanctuary the most. Wedgwood was a Labour man. Oh Jezza, what have you done to that party?

This Hansard graph contains an important message about rising antisemitism. It is part of a trend. It isn’t tied to a single individual, nor can accusations of antisemitism simply be a plot to unseat Corbyn. If the antisemitism ‘smear’ exists to unseat Corbyn, why were there spikes of discussion in 2004, 8, 9, 11 and 14? And why is there a clear and gradual increase *before* Corbyn was elected. The rise of Corbyn is linked to the rise of antisemitism, in that extremist ideologies have entered the mainstream. For this reason Corbyn is a focus. You can even see a gradual rise through the 90s. Each decade worse than the one before. This graph suggests Corbyn is a symptom of a problem that is getting worse.

The graph above from Hansard presents more evidence of the growing problem. The spikes are all significant points of Jewish life, from emancipation (1850s) to the rise of fascism and the Holocaust. Now look at the last two decades. There is clearly something in the air.

Anyone with a knowledge of the conflict can recognise the spikes in the graph. Independence (1948), Suez (1956), Six Day War (1967), Yom Kippur War (1973), Lebanon (1982), Gulf War to Oslo (1991-3), the Second intifada in the early 2000s and Lebanon in 2006. But look how Hansard highlights that the UK Parliament has now become totally preoccupied with Israel. What excuse is there for this astonishing obsession?

To highlight just how obsessive the fixation on Israel has become, I checked the words ‘Israel’ and ‘settlements’ since 1967.

The increasing fixation is clearly a trend. What makes it worse is that there have been almost as many references to Israeli settlements (1342) as there have been to Darfur and Syria’s Assad (1510). Which means a small area of political dispute where Jewish people build houses to live, receives as much attention from the UK Parliament as wholesale slaughter.

Yasser Arafat was mentioned 849 times, almost as often as Nelson Mandela (949) and three times more than Ronald Reagan (235). He is also mentioned more than Netanyahu, who has been Prime Minister of Israel for thirteen years. That’s outrageous. In the thirty-one years since it was founded, Hamas has received 2265 mentions, which is more than both ‘Bangor’ and ‘Port Talbot’ in Wales received in seventy years. Are the people of Bangor and Port Talbot who vote for parliamentary representation, happy about the fact that the UK Parliament is focused more on Hamas than their own well-being?

(h/t for providing the seeds of this blog must go to Sussex Friends of Israel – proof that Simon Cobbs is not just the prettiest face in pro-Israel advocacy).

There is much more to come. Stay tuned.