Lancaster Council just voted to boycott the Jewish state. The Councillors of this north-western city decided to create foreign policy all of their own. A policy that has no time for that tiny Middle Eastern democracy trying to survive amidst a sea of Islamist extremists, terrorist groups and despots.

Lancaster is a very white British city. The largest minority group is ‘other white’ – chiefly from Eastern Europe. It is also heavily Christian. Lancaster is not Bradford or Luton. It is not Sheffield either – another northern city with an anti-Israel fetish. Take a look at the Lancaster Councillors – there is no Islamist influence driving the agenda here. You cannot blame this brazen act of antisemitism on Islamist chest-beating or pandering to the extremists within a community that has changing demographics.

Beyond the University and its JSOC, there are also virtually no Jews in or around Lancaster.

This was a white British attack on the Jewish state. Hard left, rather than Islamist antisemitism. The product of 6 years of Corbynista politics spreading antisemitism into the mainstream.

Just a couple of months ago, there were cases of rampant antisemitism on Lancaster University Facebook pages. It would be interesting to hear how the 39 vile councillors that either supported or abstained on this BDS motion think that this type of action helps community cohesion in the United Kingdom – or more locally the Jewish students at their university.

Some people have tried to pass the Lancaster motion off as some type of opposition to arms trade deals, but if you read the minutes of the meeting, you soon realise it was nothing of the sort.

The original motion set out to ‘express its support for the Boycott, Divestment, Sanctions (BDS) movement’. There is no nuance in this. When taken in its entirety BDS is an antisemitic movement that seeks the total destruction of Israel.

Reading the additional notes is to take a journey into the blind ignorance and hatred of the people that compiled them. The motion also lays the full blame for the recent conflict on Israel – which exposes political naivety on the part of the authors. The Palestinian decision to postpone elections was probably the most likely cause – as it gave clear motive to Hamas to desire a confrontation. Whoever wrote this motion – knows no more about the conflict than is delivered to them by updates from rabid anti-Israel newsletters.

It also chose to only condemn the death of Palestinian civilians. In Lancaster – Israeli civilians killed by Hamas terrorists clearly have no value and received no equal condemnation.

The council resolved to contact local pension funds asking them to divest from *all* Israeli companies that are active in Israeli ‘settlements’. Although it may seem limited – in effect, this is a blanket ban on investment in Israel – it covers everything from all banks and utility providers to every large Israeli chain store.  Lancaster voted to boycott the Jewish state.

There were three councillors leading the toxic vote. Councillor Jack O’Dwyer-Henry proposed the motion. It was seconded by Councillor Gina Dowding and Councillor Kevin Frea.

The motion passed with a clear majority (item 30); 26 members voted for, 11 against and 13 abstentions.

O’Dwyer-Henry was the face of the motion. A true Corbynite, he was one of the five Labour councillors that quit the party because they saw Keir Starmer’s leadership as an attack on the left. Originally from Belfast, O’Dwyer-Henry is just out of university and it shows. His politics are the usual hypocritical virtue-signalling nonsense that is a common sign of political immaturity. Look at these two profile images – just nine months apart:

The absurdity of a t-shirt wearing Corbynite virtue signalling support for the Jewish community in their fight against, well, Jeremy Corbyn says all you need to know about this man. I have little doubt he would fail – and badly – a simple test on the history of the conflict. And yet he actually feels self-righteous enough to propose a boycott of the Jewish state. What an ignorant, privileged, supremacist he must be.

In many ways it is odd O’Dwyer-Henry was actually the proposer, as the two faces seconding the motion – are the real anti-Israel activists in this story. Maybe they used him as a puppet.

Gina Dowding has been an anti-Israel activist for some time. She has even shared a petition to expel the Israeli Ambassador to the UK. Not the Chinese or Russian one – just the Ambassador of the Jewish state. Dowding even writes for toxic news outlets such as Middle East Eye.

She has made dozens of tweets attacking Israel and like most of the antisemitic left – it is the only country she frequently attacks. On Syria, Pakistan and Iran – three human rights abusing powerhouses – she has absolutely nothing to say:

Maybe not having any Jews in Lancaster has blinded her somewhat, but she remains one of those who oppose the IHRA definition of antisemitism and promote the ever-toxic fringe faces of Jewish Voice for Labour: 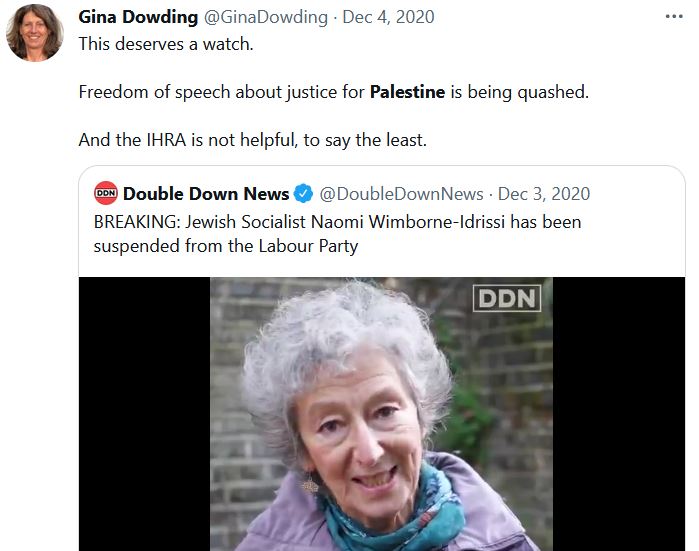 I have a challenge for Dowding. She should walk into every Jewish school, every Synagogue and every Jewish community building – and ask them what they think of JVL. Following that, she should ask herself why she has been hiding behind a handful of non-representative, Marxist, Atheist, Jews in order to attack nearly the entire community.

Dowding even wrote a report following her *third* paid-for visit to the area. I wonder how many times she has been to Syria? The report is one-sided nonsense followed by a list of ‘useful links’ that include the antisemitic Palestine Solidarity Campaign, the extremist Al-Shabaka think tank and the just as rancid ‘Free Speech on Israel’. All of these organisations seek the total destruction of the State of Israel. Yet Dowding promotes them.

Her own website is just a mix of green issues and Israel – so much so that you have to wonder whether the constituents she represents are in Lancaster or Ramallah.

What a toxic politician she is.

Like Dowding, Kevin Frea has been spreading anti-Israel poison for a while. Even going as far as sharing hard-core ‘Israel must be destroyed’ demagogues such as Miko Peled.

Also like Dowding  he hides behind a handful of Marxist Jews in order to attack almost every other Jew in the land:

But I think it is possible to sum up the hypocrisy of Kevin Frea in the next two posts that refer to the non-democratic, human-rights abusing state of Jordan:

Like most supremacists who appear to operate under an umbrella of the racism of low expectations, Frea does not appear have a problem with states that are serial human rights abusers. Could you imagine him saying he had experienced an amazing month in Israel? Of course not. But he openly shares articles praising Jordan:

Jordan is not a democracy and every citizen in Jordan is denied basic rights. Both political and civil rights are extremely curtailed. Christians are a persecuted minority there. There is no free press. This has many side effects, such as Human and labour rights abuse in Jordan being under-reported in almost all economic sectors. The LGBTQ community is officially targeted. Jordan has one of the lowest rates of women’s participation in the workforce – *in the world*.

In the Democracy Index, Israel is ranked the 27th ‘most free’ country in the world (ahead of nations such as Italy and Belgium). Jordan ranks 118th – even beneath mass-murdering tyrant states such as Turkey:

But Kevin Frea – the guy who wants to obsess about and boycott the Jewish state – the only free nation in the region – has no trouble having an amazing time in Jordan and promoting the country as a bastion of human kindness. What an absolutely vile hypocrite.

This is not the business of Lancaster Council

No local council has any business setting up or pushing foreign policy. The very idea is absurd and the Government has set out plans to introduce legislation to stop this vile abuse of power. That Lancaster Council chose to push an antisemitic policy – at a time of rising antisemitism throughout the UK – is as irresponsible as it is unforgivable.

I openly challenge any of the three far-left fascists behind this vile motion to a public debate on the conflict – as they clearly know little about it and desperately need educating. I am happy to take them all on at once if they are too scared to face me alone.