April Powers was Chief Equity & Inclusion Officer at the Society of Children’s Book Writers and Illustrators (SCBWI). For two decades she has worked in diversity and inclusion.

SCBWI are the only worldwide professional organization for children’s book authors and illustrators. On 10th June, SCBWI put out a statement about antisemitism: 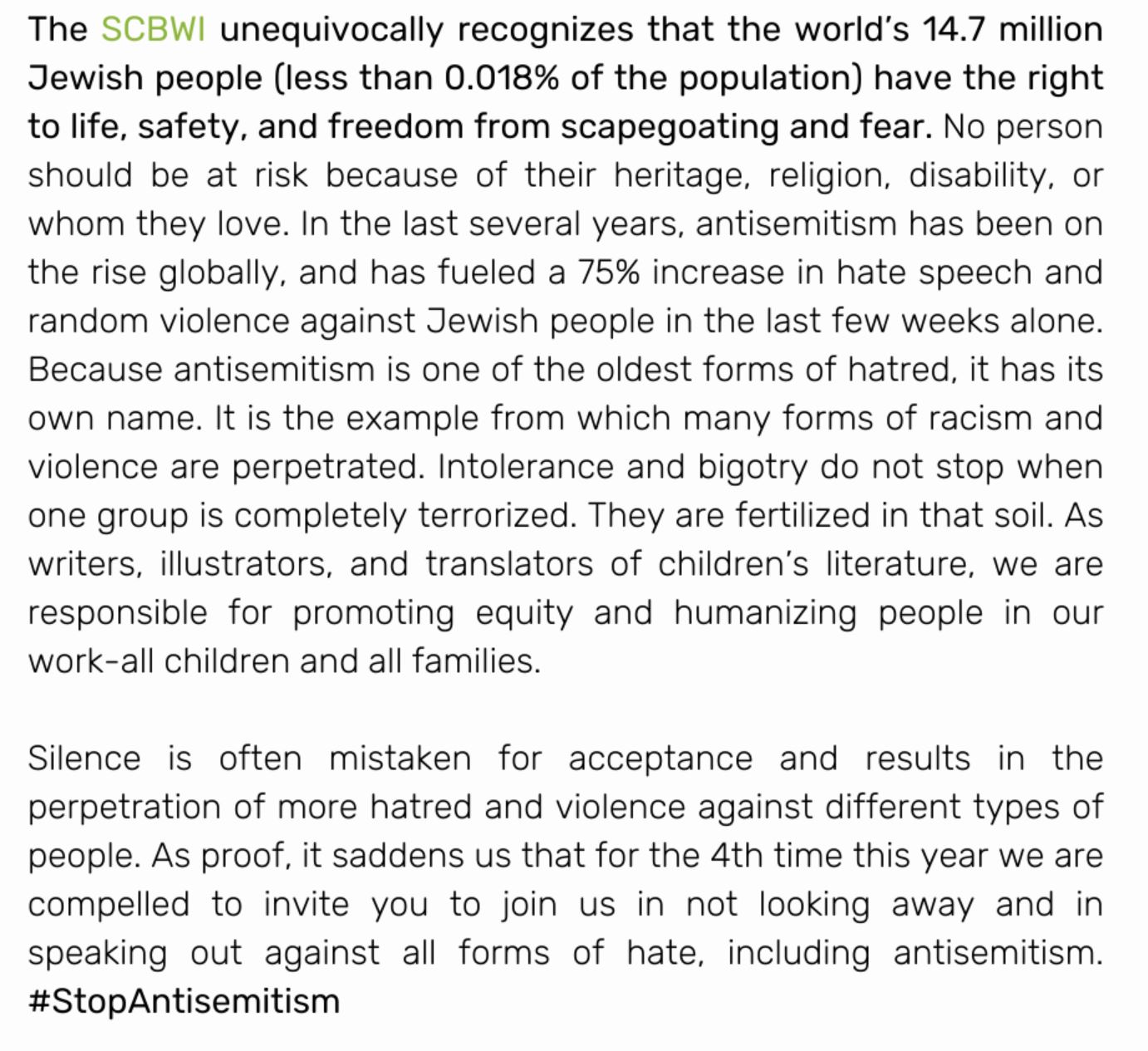 It is a simple statement, made in response to a spate of random and violent antisemitic attacks across the west:

As is always the case when you stand in solidarity with Jewish people, the haters come out to attack you. Eventually, SCBWI deleted the statement published on the Twitter platform. The post on FB was not deleted, but rather numerous angry comments about the statement were deleted and those posting them may have been blocked from commenting further.

On Twitter, SCBWI had tried several times to post the statement about antisemitism – and each time they deleted it because of the hateful response:

In actual fact, much of the public response was positive.  As it should be. The post was a simple message about antisemitism. Further, most of the hateful content came from a single account – belonging to an American Muslim with Palestinian heritage – Razan Abdin Adnani. She appears to have responded no less than 19 times to the statement on Antisemitism (June 10-12) – and that is just on Twitter. Razan also seems to have taken it on herself to continually spam negative comments (dozens of tweets) about SCBWI after the statement to the point that she was blocked She also posted and had her comments deleted on the SCBWI Facebook page.

The ‘all lives matter’ argument

Razan Abdin Adnani seems to have made the argument that ‘all lives matter.’ A position those on the left instantly associate with belittling the fight against racism. Adnani did not suggest Jews were not suffering from antisemitism – but chose to talk *relentlessly* about how Muslims are under attack and should also be mentioned:

An irony here is that whilst Razan’s own account is overflowing with statements about ‘Islamophobia’ (anti-Muslim bigotry) until this event – she had never mentioned antisemitism on her account. She also misrepresented the current issue completely, posting that the attacks on Jews in 2021 were somehow related to the white, Christian supremacist world:

In actual fact, most of the attacks on Jews that occurred recently in Europe and the US was violence by radicalised Islamists – not Christians. It isn’t white people driving through London’s streets threatening to rape our daughters.

SCBWI bow to the haters

Until now, we have a normal everyday occurrence on social media. An organisation or well-known public figure stands in solidarity with Jewish people – and for this, they are attacked. We cannot know exactly what went on behind closed doors, between SCBWI and the author of the post – their black, Jewish, Chief Equity & Inclusion Officer, April Powers – but what followed was disgraceful appeasement, abandonment of principles, and proof positive that SCBWI doesn’t really stand up to antisemitism at all.

Eventually, SCBWI actually issued a public apology for making the statement on antisemitism. And whatever did go on behind closed doors, left April Powers feeling so isolated that she felt the need to resign. In the end, the victim of the SCBWI statement on antisemitism – the person who paid the price and was bullied out of her job – was the black Jewish woman.

The SCBWI apology was written by their Executive Director, Lin Oliver. The statement says that they have accepted the resignation of April Powers and that they apologise for absolutely everything. SCBWI bowed before the haters, stripped down and publicly flagellated themselves.

They even specifically apologise to the very person who had been harassing them with the ‘all lives matter’ argument – Razan Abdin-Adnani:

It is important to understand who SCBWI apologised to. Razan Abdin-Adnani is not some innocent, peace-loving and misunderstood victim, but rather a hard-core, and rather extreme activist.  The tweet below not only spreads lies about co-existence (Jews were never more than vulnerable second-class citizens under Ottoman rule) – but also suggests that millions of Israelis should be forcibly removed and sent to Poland or Russia. 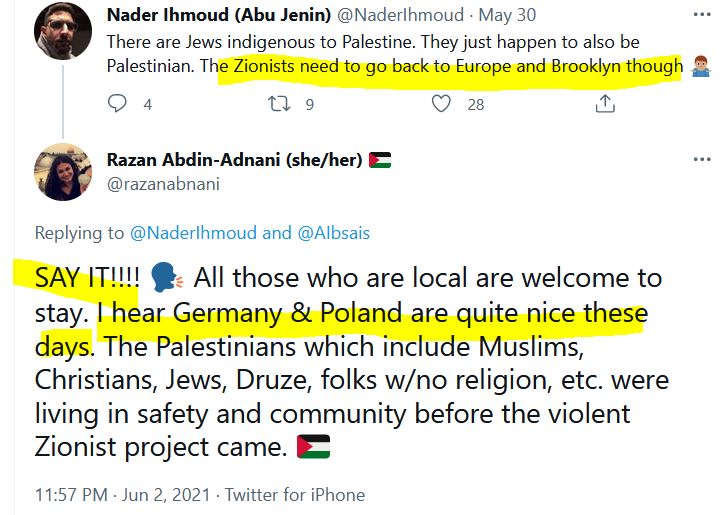 Make no mistake about how racist this is. If this were a post about black people or Muslims in the US, needing to be forcibly sent away to wherever people believed their ancestors came from – the author would rightfully be called a neo-Nazi. There is no difference here. This person has no tolerance, no understanding of human rights and no knowledge of actual history. It is clear that her issue with the SCBWI post was not that it didn’t mention Muslims, but that it was written at all. Razan Abdin Adnani picked a cheap fight with SCBWI and boy, did she win easily.

What SCBWI did was an act of proleptic dhimmitude (submission to Islamic rule, even before it actually exists). It was a cowardly and spineless thing to do when facing such an attack. They simply caved to the first extremist voice that was raised in anger against them. It is a strategy of absolute surrender. Nothing they can ever do will be enough for people like Razan Abdin Adnani. This was her post *after* the apology:

She isn’t about equality or having her voice heard. She is about *only* her voice being heard. It is the position on the extreme left that until white people (and she errantly sees Zionist Jews as white) are all in chains and have delivered all their wealth to people like her, she will continue to *resist*. It is a supremacist argument, not a humanitarian one. Razan also thinks Israel should be destroyed:

She has even disgracefully  ‘loved’ posts that compare Zionists (and all colonisers – like the US) to cockroaches – classic antisemitism:

This is what SCBWI empowered and apologised to. There is no excuse for this – it is a truly shameful episode. SCBWI made a statement about antisemitism and then deserted the Jewish author as soon as trouble came knocking. Lin Oliver should hang her head in shame at the way she has acted here. She should delete the apology to the racist extremist – get on the phone to the person she abandoned, and offer April Powers whatever it takes to bring her back to the organisation.

I need your help

This research is unique – it goes wherever it needs to – and it is fully dependant on community support. The results speak for themselves and for six years I have been creating headlines. I engage in forensic research, much of it undercover, into anti-Jewish hatred, anti-Zionism and the lies they tell about Israel.

This site battles back against those who revise history and I expose antisemitism. If you can, please consider making a donation – it really does make it all possible.

6 thoughts on “Black, Jewish and bullied into quitting – SCBWI and the April Powers story”