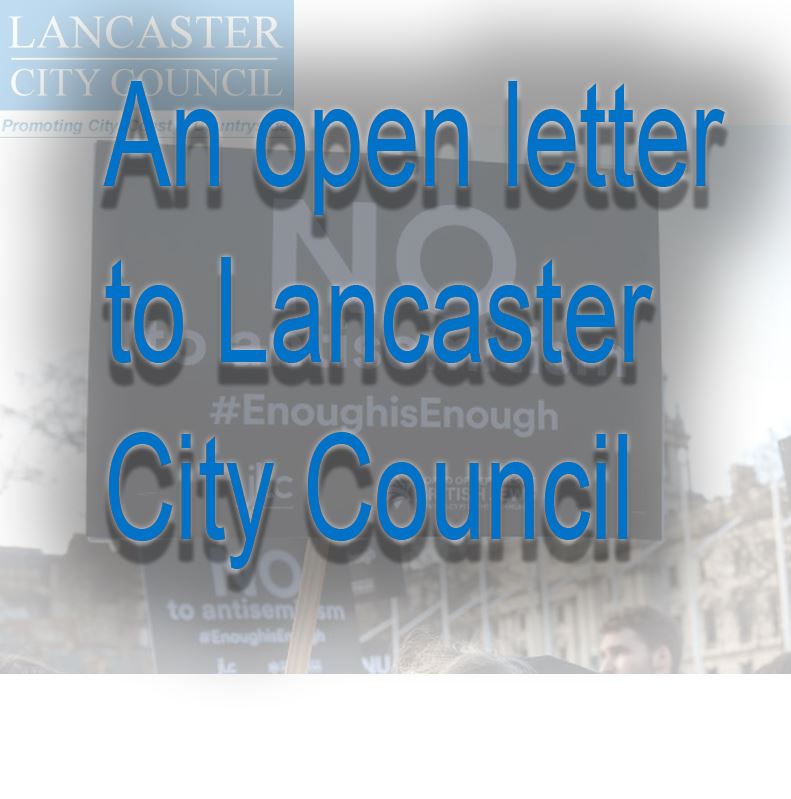 Reject Antisemitism – an open letter to all the Lancaster City Councillors

To the Lancaster City Councillors

This letter is about the anti-Israel motion you recently passed. I have seen the motion, read the minutes and watched the video of the ‘debate’. I wish to keep this letter short, and there are far too many issues to address – so I will just stick to several key points.

Having watched the video, it is quite clear that you were lied to. The successful vote was the consequence of people not having sufficient knowledge to counter the lies that were spread at the meeting.

It was quite disturbing viewing. The proposer admitted he knew nothing about pensions. He also said he had no idea about BDS ties to terrorist groups. He even added that he did not understand the international law upon which he based his entire argument. Yet despite these admissions and the clear ignorance of the person who brought the motion to the table – 39 out of 50 of you still chose to vote in favour of his motion or abstain. This alone should send shudders down the spines of every single person you represent.

I have to be completely honest, it is not easy writing this to you and remaining calm. What you did was slap the Jewish community around the face. This isn’t about peace – it is a divisive move that strengthens only those that seek conflict. You were even told that it was antisemitic. You didn’t care – you went ahead and voted for it anyway. Knowing what I do about the conflict, rising antisemitism and the extremists behind BDS – seeing a Council in the UK vote with such ignorance – for something so toxic – even as convoys of ‘BDS supporters’ call for the rape and murder of Jews on our streets – explains perfectly why British Jews are right to feel so uneasy.

The meeting and the lies

For over 2000 years people have demonised and told lies about Jews in order to set them up for punishment. However you may have chosen to rationalise what occurred at the Lancaster City Council meeting, you merely continued that obsessive and antisemitic tradition. You were told lies about the Jewish state – and you happily voted in favour of punishing it.

All of those speaking in favour of the motion fed you raw propaganda. Councillor Jack O’Dwyer-Henry’s opening speech appeared to mirror Qatari State TV propaganda almost word for word. Don’t be surprised, anti-Israel activists almost never take their news from the mainstream.

There were far too many factual errors and outright lies to mention. Jonathan Hoffman listed some of them in his recent article, but even that is incomplete. Even the term ‘illegal occupation’ which was used dozens of times – is factually incorrect. The ‘occupation’ itself – which was born in a defensive war in which Arab nations sought to annihilate the Jewish state – cannot be ‘illegal’. The entire framing of the motion’s argument was based on ignorance, distortion, lies and the usual demonisation of the global Jew (Israel).

BDS – a call for Israel’s destruction

There was nobody in the room to explain to you what the boycott movement against Israel actually is –  a call for Israel’s destruction. You don’t need to take my word for it. Listen to anti-Zionist – and no friend of Israel – Norman Finkelstein. During an interview, he explains that BDS is fundamentally dishonest – a con – and is a one-sided, extremist movement that seeks Israel’s destruction. Even though I disagree with most of his political arguments, I seriously suggest you all watch it. And then ask yourselves why the BDS movement never talks about peace and refuses to recognise Israel *behind any borders*.

Do any of you know that only one of the three goals of BDS has anything to do with the territory Israel captured (West Bank and Gaza) in 1967?  Do you know what the other two aims are that BDS – and you – now support? Because the result of fulfilling the 3 BDS goals is – as Finkelstein points out – the destruction of Israel – the only Jewish state in the world and the only democracy in the Middle East. How shameful that some of you voted to support something you simply do not understand; If BDS were to succeed – it would leave 6 million Jews in the Middle East at the mercy of their radical Islamist terrorist neighbours.

Picking on the Jewish state

There were a few brave councillors who stood up to oppose the motion. O’Dwyer-Henry’s response to questions was vague and deceptive. Like most ignorant propagandists who read from a sheet, he cannot deal with anything that goes off-script. Every single question was met either with ‘I don’t know’ or avoided.

Two of those on the side of the motion even used the ‘some of my best friends are Jewish’ response, to deflect from questions they were asked. The voice of the Jewish Student Society at Lancaster was ignored and completely silenced by O’Dwyer Henry – and when he was asked about it – he deflected. The vast majority of Jews are Zionists and oppose BDS – how shameful that you allowed people to hide behind a fringe and non-representative voice as a means of disguising an antisemitic act.

Why antisemitic? What you were told about Israel is fundamentally not true. Much of the information was straightforward lies. Other bits were exaggerated, distorted, removed from context and totally one-sided. A few people in a room, obsessing and lying about the one Jewish state. Sitting as it does as the only democracy in the Middle East – and threatened by the same type of radical Islamic terrorist groups that threaten us all here. And this is what you want to boycott? Not China, Pakistan, Russia, Burma, Syria, South Sudan, the DRC, Iran or any of the real human rights abusers in the world – but tiny Israel, with its battle for survival and low-intensity conflict. The very fact that the Council in the City of Lancaster sat to discuss it – is part of the problem. If you cannot see this is the truth – you’ve been blinded by the antisemitism too.

This is not how you bring peace to the region – far from it. You simply help to strengthen the extremists and perpetuate the conflict. All through ignorance.

Every time Israel has withdrawn unilaterally from land, radical Islamic terrorists have taken over. Southern Lebanon is now a Hezbollah stronghold. Gaza is now controlled by Hamas. The Palestinian Authority even cancelled recent elections because they knew that Hamas would win. If you think that if Israel simply dismantles the wall and pulls back to the 1967 borders  – as BDS demands (1 of their 3 aims) – then there will be peace – you know nothing about the Middle East at all.

An offer to help

I did offer to debate against any of the three Councillors who stood behind this motion, and my offer was ignored. So I turn to you all now. I am happy to come to Lancaster and talk to you all about why this motion must be reversed – and to point out the numerous deceptions, lies and cases of pure propaganda that you were fed before the vote. I can prove to you – that the councillors who fed you false information are ignorant of many of the key facts of the conflict and the true nature of the BDS movement they support.

Feel free to contact me at david@tillescentral.com to either ask questions or arrange for me to come and talk to you.

What occurred at your meeting cannot stand and must not go unanswered. You stood in solidarity with terrorists – and warmongers – not Palestinians and peacemakers. This blatantly antisemitic decision must be reversed at the first possible opportunity.