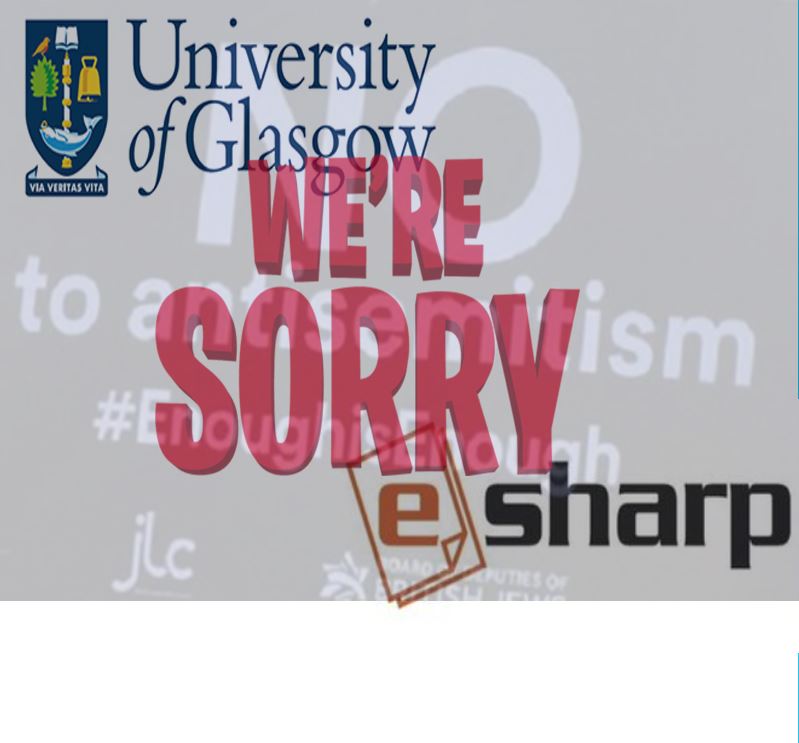 Last December I ran an exclusive about a deeply antisemitic conspiracy article that was published in the academic esharp magazine at Glasgow University. ‘esharp‘ is an ‘international online journal for postgraduate research’ and Glasgow University is very proud of the outlet. The University website even states that all the post-graduate papers are double-blind peer-reviewed.

Having read the paper and researched it thoroughly, I complained that the article was ‘so bad and the errors so numerous, that it would need a book to address them all.’ The work was shoddy, the references did not support the article’s argument, many assertions were academically unsupported – and worst of all – the whole thing was neck-deep in blatant antisemitic conspiracy. The paper basically argued that people like myself (I featured prominently) have been recruited by Israel to lie, smear and spread disinformation. In the eyes of the author, I – and those like me – are enemies of British democracy – 5th columnists. A classic antisemitic trope.

I turned to Glasgow University and asked how on earth this antisemitic diatribe was ever published – worse still, that it had appeared in a peer-reviewed journal.

Following their own internal investigation, Glasgow University has recently published a comprehensive apology online. Their statement has been added as an introduction to the original journal – so anyone who tries to access the paper today will first read a statement pointing it out as both promoting antisemitic conspiracy as well as representing a complete failure in academic standards.

“This article does not meet those standards of scholarship. In particular, this article employs some discursive strategies, including a biased selection of sources as well as the misrepresentation of data, which promote an unfounded antisemitic theory regarding the State of Israel and its activity in the United Kingdom. We would like to apologise that our editorial procedures did not identify those failures in scholarship” – esharp Editorial Team, Glasgow University May 2021.

It is a devastating statement and a total vindication of my own research. I had claimed that the article was based on biased sources, misrepresented its own reference material and was promoting antisemitic ideology. Those behind the investigation at the University appear to have agreed with me on all three points.

Those promoting the esharp antisemitic paper

Following its original publication in the esharp journal, the antisemitic paper was referenced in academic articles and became available on Google Scholar. It was also used as a reference in Wikipedia. This means that both Google Scholar and Wikipedia are promoting antisemitic conspiracy articles. It should come as no surprise that the British Society for Middle Eastern Studies (BRISMES) conference in 2016 was the first place to give Jane Jackman a platform to present her paper. The University of Warwick was home for years to BRISMES, where Nicola Pratt and Teodora Todorova (two toxic Warwick academics) ruled the roost. The paper represents the type of gutter anti-Zionist politics that the organisation – and these academics – seem to adore. We now know that BRISMES platforms antisemitic conspiracy. That’s a fact.

It is an important victory

The apology, which is now on the Glasgow University website – presents evidence of an important victory and I suggest everyone engaged in fighting antisemitism bookmarks the page.

There are several layers to this. Jane Jackman’s (the author) paper represents the ‘David Miller’ school of thought. ‘Spinwatch’ – one of Millers obsessive anti-Zionist outlets – features heavily. Other sources relied upon, include anti-Israel activists such as Ben White and the conspiracy theorist / academic Ilan Pappe. Greg Philo and Mike Berry – two academics from David Miller’s academic family are also referenced. The paper argues what David Miller argues – that Zionist Jews in the UK are akin to 5th columnists and are out to subvert British democracy and stifle criticism of Israel. It is, as the University now states on its website – all one toxic antisemitic conspiracy theory.

Having this fact so firmly endorsed, with the university publicly labelling this paper as ‘promoting an unfounded antisemitic theory’, is a clear win. The fact that this article was actually published, proves that there is a rotten strain in academia. A poison spreading through our universities. With malignant cells in place such as Exeter, SOAS and Warwick – it acts as a cancer – with new academics, freshly dosed with antisemitic ideology, leaving the nests to spread the sickness elsewhere. If this is not true – how was the paper – even after a peer review – ever published?

So this apology from the esharp editorial team at the University of Glasgow is important. Those who have been sharing the article, those who promote the toxic anti-Zionism contained within its pages – are all promoting antisemitism. If anyone argues with this – just point them to the statement on the Glasgow University website. A win is a win.

(anyone who wrote a complaint to the university following my exclusive should pat themselves on the back. This is a clear victory and shows that our efforts are worthwhile.)