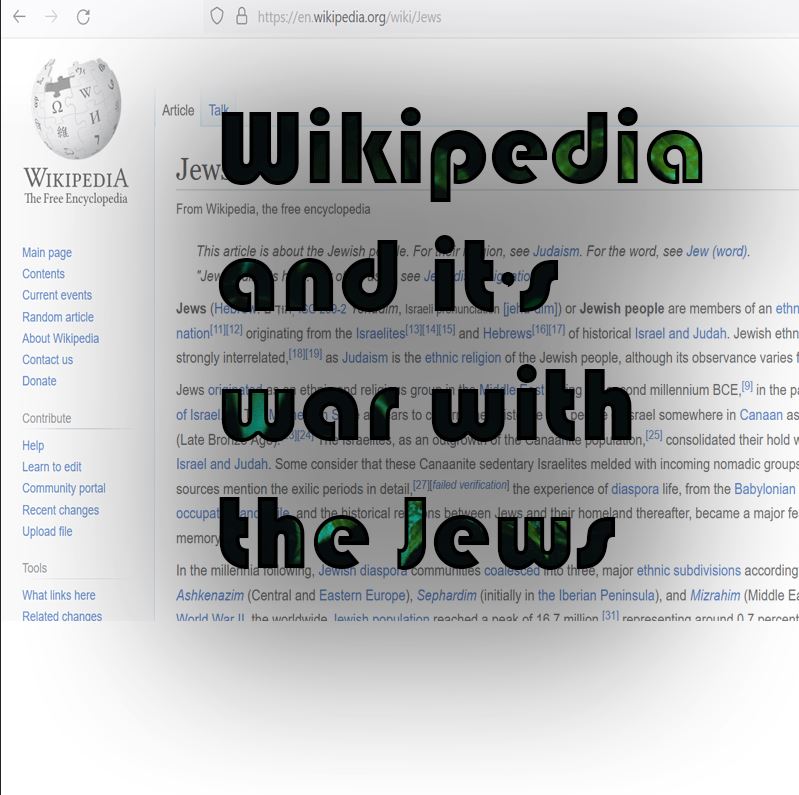 Make no mistake – Wikipedia is at war with the Jews

Larry Sanger, the man who co-founded Wikipedia recently said that ‘nobody should trust Wikipedia.’ Sanger describes the Wikipedia environment – in which conservative voices are stifled or banned and criticism of leftist ideology – where the argument does appear – reads like a defence counsel’s brief.

This is damning criticism from a man who would know better than most. But Sanger only gets part of the picture. He assesses a Wikipedia environment in which two sides – both powerful are battling – with one having the upper hand. This leads to an inevitable and clear bias and editorial domination – which is what Sanger references. But Sanger fails to comprehend the true scale of the problem. For example – in a situation in which one side is vastly numerically superior to the other.

The Jews are the quintessential minority group. The enemies of the Jews far outnumber them. Islamists. far-left activists and neo-Nazis are all out there writing Wikipedia edits. The pages on Wikipedia that relate to the Jews or Israel are often the target.

Wikipedia is at war with the Jews. Make no mistake about this.

Wikipedia is the 13th most visited website in the world. It probably influences more people than any other source on the planet. This means it is impossible to overstate the damage the website is doing. All those children having their ideas influenced by Wikipedia today – are the leaders of tomorrow.

Every Wikipedia page that deals with the history of Jews or Israel – is tainted. The website spreads ‘fake news’ and provides legitimacy to antisemitic arguments. Toxic academics like David Miller provide written source material, extremist websites such as Electronic Intifada produce conspiracy theories and an army of Islamist / hard-left Wikipedia editors spend all their time reworking history. It is a co-dependent alliance that pushes lies ever further into the mainstream. Take the recent push to revise education material in Scotland to provide a ‘pro-Palestinian’ narrative – it is another step in this decades old strategy. If the network of toxic academics was not there – if the rabidly antisemitic NGOs were not making their outrageous claims – if Wikipedia had not been overrun by Islamists and hard-left activists – then there would not be enough momentum for the push to poison young minds in Scotland.

If we spend all our time putting out the fires (school material in Scotland) – rather than dealing with the sources of the problem (academia, Wikipedia) – we will be fighting a battle we will lose.

Rewriting Israeli history is part of the antisemitic strategy. Such as an attempt to turn what was a bloody and difficult civil war – a battle for Jewish survival in 1948 – into an act of pre-planned ethnic cleansing. A fake news event – in which a powerful Jewish ‘militia’ followed a blueprint to massacre and expel an innocent Arab population. This ‘Nabka’ narrative never happened – so anti-Israel activists are busy rewriting history to ‘prove’ a lie.

Just a few examples. Take the ‘massacre at Balad al Shaykh’ in 1948. It is an event that source documents prove never happened – but despite numerous protests – Wikipedia is still telling everyone that it did. Or the events during the 1920 Nebi Musa festival. It was an anti-Jewish riot, fuelled by anti-Jewish rhetoric of religious Islamic leaders. Yet Wikipedia’s page – which originally told a version much closer to the truth – has been edited by Israel’s enemies until the truth can no longer be seen.

The history of the Palestinian identity – which did not exist at all before the British drew some lines on a map – now stretches back 1000s of years.

There is not a single page related to the conflict – that has not been tampered with by insidious anti-Israel activists who are out to demonise Israel and spread lies. As teachers and academics use the information in Wikipedia to write material for schools – these lies quickly find their way into the classroom – even in textbooks.

Pages that address pro-Israel advocacy groups are also a target. This is the opening sentence of the ‘Stand with Us’ Wikipedia page:

Notice the unnecessary insertion of the ‘right-wing’ label. The page is full of weighted words and criticisms. In contrast, pro-Palestinian advocacy groups – are treated reverentially. The Palestine Solidarity Campaign page reads like an advert. The antisemitism that infests the group is never mentioned.

The BICOM article also links to a page on the ‘Israel lobby in the UK’. This lobby page belongs on a neo-Nazi website like Stormfront. It is full of antisemitic conspiracy and endless smears. The page even used the antisemitic article – that the University of Glasgow recently apologised for – as a source.

That page proves a central part of the argument of this piece. If you are standing up for Israel – then there are Wikipedia editors looking for dirt to publish about you.

Whilst many of its pages – spread anti-Jewish hated – Wikipedia also belittles the fight against antisemitism. The page for the extremist pro-Corbyn group Jewish Voice for Labour contains *no criticism* at all. Apparently – not one of the 100s of articles exposing this group’s extremism was seen by any of the Wikipedia editors who wrote it. Instead the page just contains a list of unfounded accusations and statements made by JVL – all designed to stifle the fight against antisemitism. If someone wanted to reference an argument against Corbyn’s Labour being antisemitic – this is the page they would bookmark.

As an example – the page frequently refers to the fight against Corbyn as an ‘orchestrated campaign’ that was all about Corbyn’s socialist or pro-Palestinian slant:

As there is no criticism on the page – these statements (and there are a lot of them) are never challenged. If you go on Wikipedia to try to challenge them – your input will be deleted. If you persist – you will be banned.

Whichever page you look at – you will see the bias. The page on the Chakrabarti whitewash – does not contain a section on the mountains of criticism the report received. On the occassions where deniability is impossible – the introduction provided on the Wikipedia page becomes so overloaded with pointless information -that the truth becomes hidden. On the page dealing with antisemitism in the Labour Party – you would have to read through 470 words implying there isn’t a serious problem – before you find any mention of the findings of the damning EHRC report.

Anything to do with Jewish history has been attacked. Jesus – a Jew preaching to Jews – has his identity erased on Wikipedia’s pages. Jesus is listed as a ‘pre-mandate’ Palestinian.

As Jewish history has become a politicised part of the current conversation – it has also become a target for Wikipedia’s swarm of antisemitic editors. One method used is to equate histories – as if the Palestinian identity (a 20th century invention) and the Jewish identity (3000 years old) are somehow equal. The introduction on the page of Jerusalem is a good example of this strategy:

That section basically turns 3000 years of Jewish history into a ‘he said’ – ‘she said’ argument that flattens the truth out of existence.

Another good examples is the page on the ‘history of Palestine’ – which itself is dependant on a page ‘the region of Palestine’. In these pages ‘Palestine’ is defined by the borders created through the Mandate in 1922. As a region – this specific area has no history beyond that. If we accept ‘Palestine’ as a historical region – (which only stayed in the western conciousness because Christians viewed it as the Holy Land) – then parts of Jordan and Syria *must* also be included. But they are not. This is therefore a distorted and politicised page – meaningless in a geo-political and historical context – that was created solely for anti-Israel purposes.

All of the pages – all of them have been shaped by anti-Israel activists who seek to belittle the Jewish ties with the Jewish homeland.

Wikipedia’s war with the Jews

What is presented above is just a few of the 10000s of examples that can be found.

All this means that Larry Sanger understates the problem. He has not considered an environment in which anti-Jewish racists vastly outnumber the opposition and dominate the editorial narrative. Wikipedia has antisemites ruling the roost whenever and wherever Jewish people or Israel is mentioned.

These editors lie through omission, demonise Israel, belittle Jewish history, obsessively create new pages every time something happens and sanction all those who oppose them. Wikipedia’s world vision is an antisemitic one.

So when Larry Sanger says ‘Wikipedia is not to be trusted’ he doesn’t go far enough. In truth Wikipedia must be fought against – the antisemitic editors removed from the platform – and the website should carry warnings – that render it unusable inside an academic or school environment.

Simply put – Wikipedia is an enemy of the Jews.