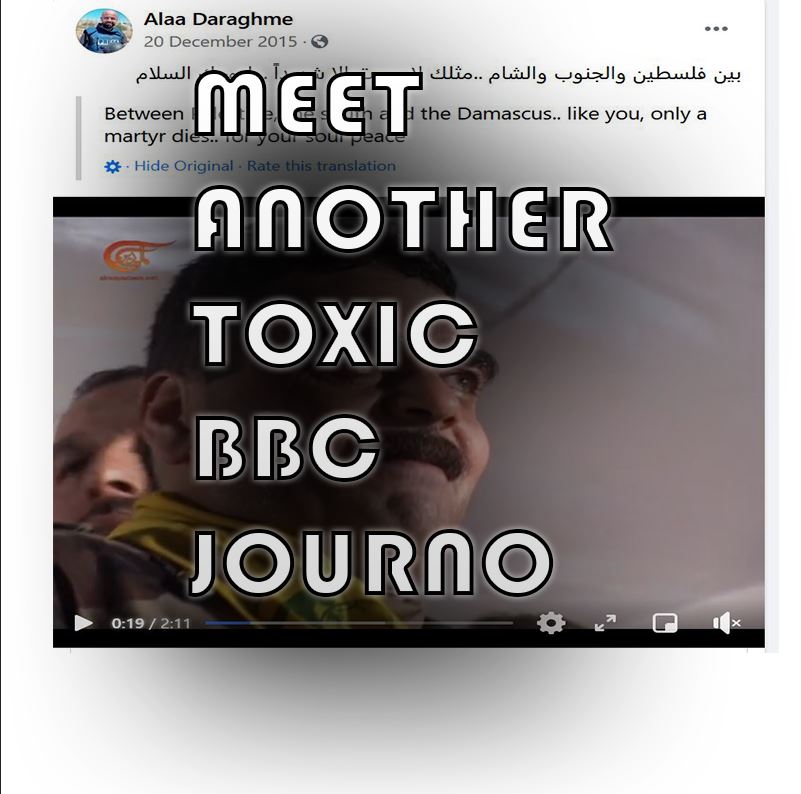 With pro-terrorist supporters and antisemitic conspiracy theorists producing their news, there is something truly rotten at the BBC. Just recently BBC journalist Tala Halawa was fired for having tweeted that ‘Hitler was right’. This latest story built as it was researched, so bear with me – you certainly won’t be disappointed.

It started with a tweet from Tom Bateman – a BBC Middle East Correspondent. Bateman has long had eyes on Israel. Many years ago whilst still at Radio 1 his favourite news reporter was Jeremy Bowen – the BBC’s Middle East editor.

Since Bateman took up the post in Jerusalem, the news fact-checking website ‘CAMERA’ has had cause to discuss Bateman’s inaccurate reporting on dozens of occasions.

On Sunday, Tom Bateman retweeted a post from a Palestinian journalist – Alaa Daraghme. It was one of those typical propaganda posts from the Qalandiya checkpoint. You know the ones – iron bars, kids pushed through gates – all the usual carefully selected close-up shots that make it look like some type of prison. These images never show that the place has been completely renovated and now looks like a modern train station:

But that is what Tom Bateman does – he often posts decontextualised propaganda. For example, in his Daraghme retweet there was no explanation of why the checkpoint is there – why it was so necessary for Israel to protect its civilians from the onslaught of terrorist attacks. The checkpoint was originally set in place in 2001 – at the height of the second Intifada. This is vitally important context.

You never have to look for long at Bateman’s posts to realise this journalist has lost the plot. Take this one about Sheikh Jarrah from just three days ago:

Bateman’s ‘armed settler group’ tweet makes it sound like the wild west. If Bateman has done his research he would be fully aware of the reality behind this private property dispute. But his consistently slanted output suggests he just doesn’t see things this way. Like many BBC journalists in Israel, he appears to be fully immersed in the local BBC set-up – which chiefly because of the BBC Arabic network – is almost completely Palestinian in nature. The Palestinians have the BBC wrapped firmly around their fingers. If the situation wasn’t so damaging, I’d even feel sorry for them.

So it came as no real surprise that Bateman retweeted Alaa Daraghme’s post. But the connection still interested me – and I wondered – who this journalist was that the BBC correspondent felt so comfortable promoting. It didn’t take long for me to find his timeline was awash with problems.

This is the first images Daraghme shared that caught my eye – an image calling Israelis ‘ Nazis’: 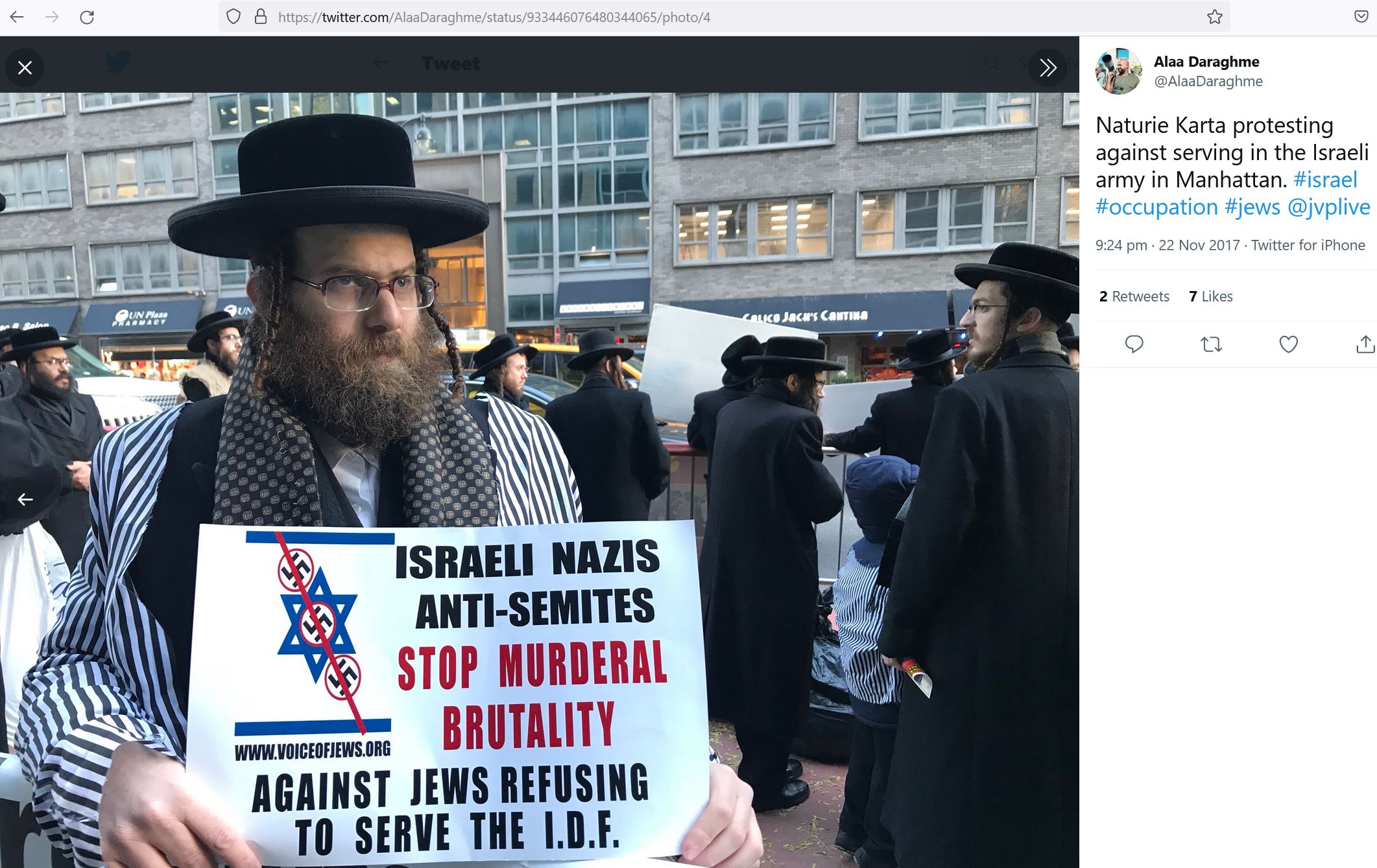 It is possible to argue that he merely shared an image of someone else being antisemitic – but he still chose to promote the Nazi analogy. Then  things soon got at a lot worse. Alaa Daraghme appears to be a full on conspiracy theorist – who often shares fake news.

Daraghme was recently caught, sharing a fake news video about an Israeli ‘ramming’ Palestinians in Jerusalem. This was one of those videos that went viral during the recent violence. In reality that Israeli driver only lost control of his car – because he was attacked by a Palestinian mob.

But there is far more than one viral video in his timeline. During the ‘knifing Intifada’ of 2015, antisemitic Palestinian propagandists pushed a vile conspiracy theory that the knifing attacks were not real. Instead – they claimed that Israelis shot Palestinian freely – and then placed knifes at the scene to provide a pretext for their bloodlust.

The real story was that the terrorist attacked and injured a soldier – before he was shot.

The conspiracy is a constant trend in Daraghme’s posts. Here is another example:

In that post, Daraghme changes the knife for a gun – and has two Palestinians shot – ‘just because’ with Israel using a shooting attack as an excuse. In the real world – on 14th February 2016, Palestinians opened fire on police officers in Jerusalem. The terrorists were all shot.

If only antisemitic conspiracy theories were the worst of Daraghme’s behaviour. 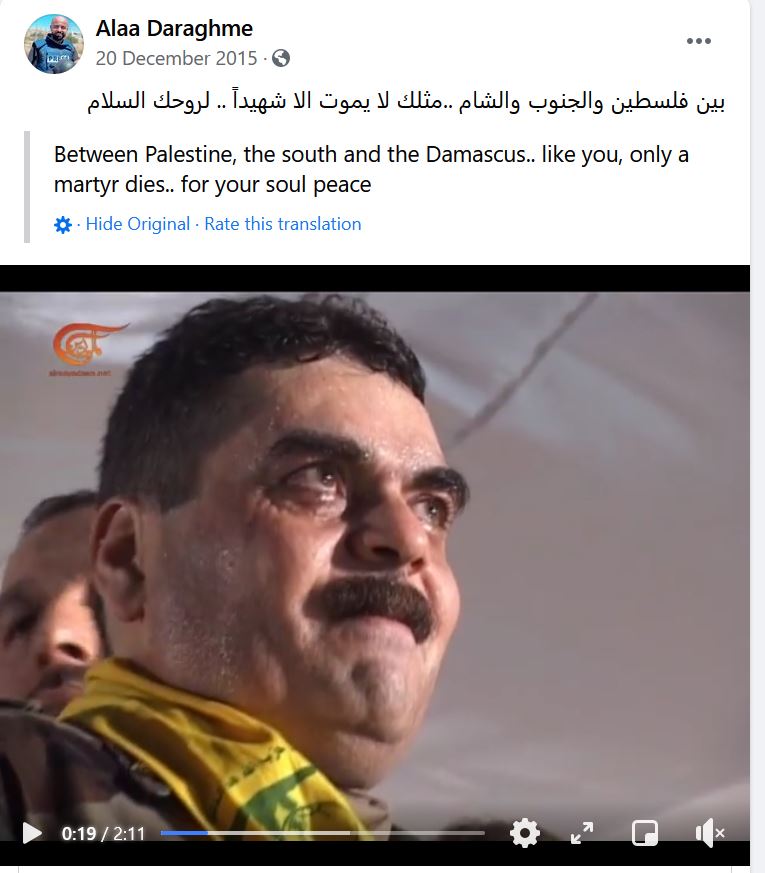 The brutal terrorist was the key perpetrator of the Nahariyya attack in 1979. Kutnar attacked an apartment block and slaughtered a family. During the attack, he took a father, Danny Haran, and his 4-year-old daughter down to the beach where he killed them both. First he shot the father – so that murder would be the last thing the young child would ever see. Then he took 4-year-old Einat – and smashed her head against rocks with his rifle butt.

In the next post, Daraghme is commemorating two ‘martyrs’. One in Jerusalem, the other in Hebron. On that day there were two attacks, with one leaving a border policeman with moderate injuries:

Daraghme used to post mostly in Arabic – which makes searching his timeline more difficult – but even without being able to create a full picture, the toxic nature of his posting is clear. He also spreads antisemitic, homophobic and misogynistic messages. Here is one about ‘Jewish money’: 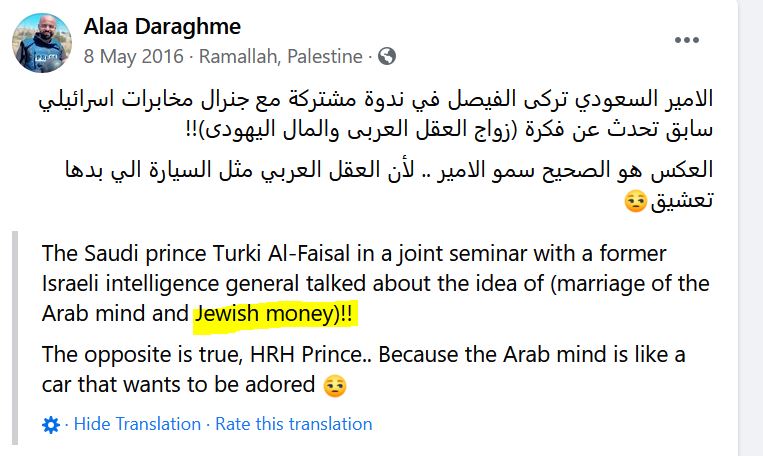 But his political ideology firmly lines up behind Iran, the butcher Assad, and the radical Islamist terror group – Hezbollah:

It was clear to me that Tom Bateman should not have been sharing anything produced by Alaa Daraghme. It took me just 5 minutes to realise Daraghme was worthy of a closer look – so how can Bateman be so blind? Turns out it is part of the overall BBC blindness. The naivety that is born from total dependency.

Here is Bateman congratulating Daraghme’s professionalism on a piece about Taybeh Beer: 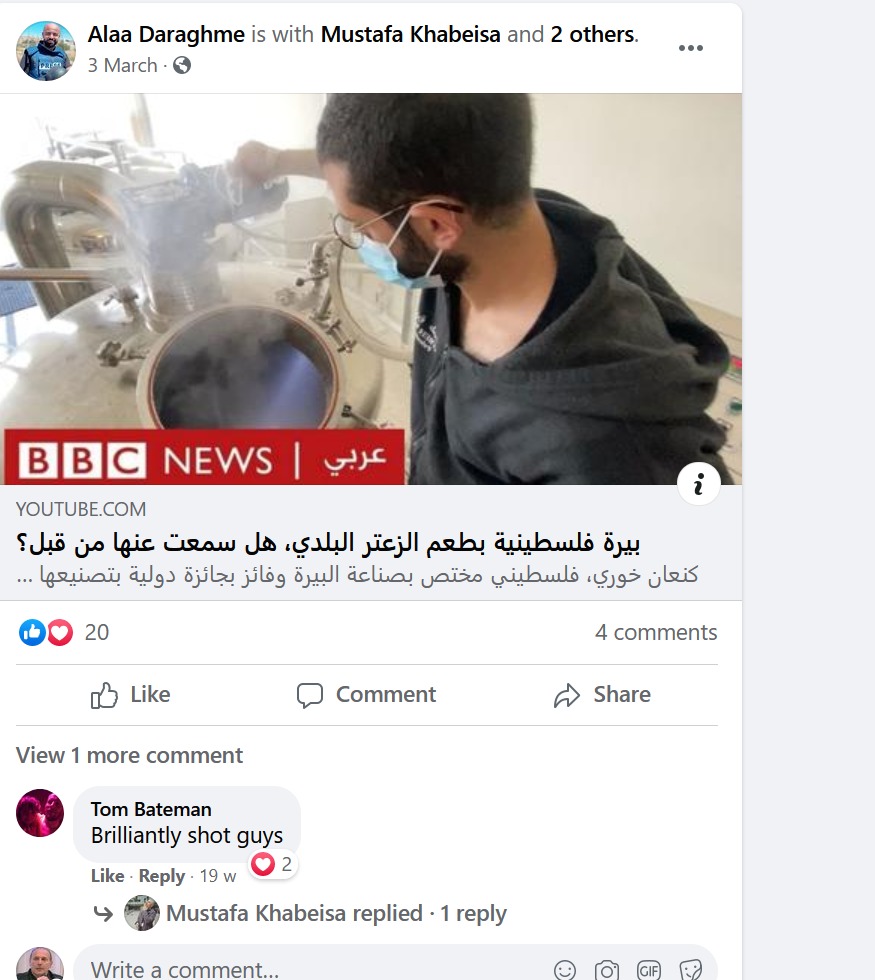 Whether in fully employment or as a freelancer – Alaa Daraghme is part of the BBC Arabic’s network in Jerusalem. He produces videos for them and reports for them. The BBC’s own Middle East correspondent certainly knows him well enough to promote and admire his work.

How? Why is it – that it takes Jewish researchers to uncover toxic journalists the BBC work alongside? All of these posts were in the public domain. Some time and simple keyword checks – are all it takes to realise this man should not be trusted to present news.

Why is the BBC failing in its most basic duty? Deploying trustworthy journalists. And if Tom Bateman is so blind (or naive) so as to not realise he is surrounded by a network spinning him propaganda and toxic lies – what on earth is he doing there? Perhaps I should at least thank him for bringing the Hezbollah supporting Alaa Daraghme to my attention – so thanks Tom!